REVIEW: Shadow of the Colossus (PS4)

When Sony officially announced a ‘ground up’ remake of the cult classic that is Shadow of the Colossus for PS4, there was some skepticism to say the least. This PS2 classic from Team Ico had already received the ‘remastered’ treatment for the PS3 back in 2011 so many wondered why we needed another remake 7 years later.

Well, like it or not, Bluepoint Games (the team behind the first remaster) and Sony are about to release their latest re-imagining of Shadow of the Colossus on PS4 this Friday. Does it still hold the alluring charm of the original whilst utilising the processing power of the PS4 and PS4 Pro? Read on to find out in our review of Shadow of the Colossus.

On first impressions, the PS4 version of Shadow of the Colossus is quite different to its 2005 counterpart, stylistically speaking. With the power of Sony’s latest console(s), Bluepoint Games are able to push more polygons than ever before when creating the Colossi and the world in which they inhabit. This new level of clarity and detail looks fantastic but, inevitably and understandably, was never going to match  the design and colour choices of the original. All of this aside, Bluepoint Games have created a truly stunning world that is beautifully vast whilst still feeling intimate and personal.

For many, the appeal of Shadow of the Colossus and why it’s such a fan favourite has more to do with the story being told, the world in which it happens and the deeper messages being depicted than the ‘simple’ task of killing ominous giants. I say ‘simple’ but what I really mean is it’s an extremely arduous yet fulfilling endeavor to topple colossus after colossus to try save your fallen maiden.

As you ride around the wilderness on your trusty steed, Argo, it’s hard not to be captivated by the sheer scale of it all. Bluepoint have done an incredible job of creating an intricate yet immensely detailed world that I feel Team Ico could only have dreamed off when creating the original on the PS2.

The in-game photo mode must also be commended as it offers a surprising amount of editing tools, including exposure, contrast, FoV, and saturation; all of which give you the opportunity to capture the beautiful intricacies and immense vastness of the world around you.

As we all know though, improved graphics are only one part of a remaster with control schemes, framerate and overall resolution playing an important part also. Bluepoint Games have developed a brand new control scheme for this title but, thankfully, have also included the option to revert back to the original’s controls if that’s more your style. 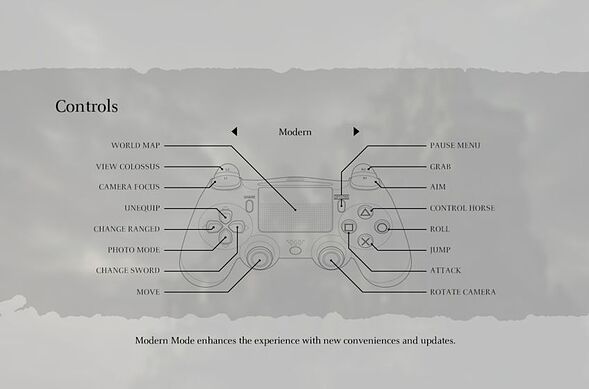 They’ve also managed to lock down framerates on both the PS4 and PS4 Pro with the later offering the much coveted 60FPS option at 1080p, a setting many gamers are extremely happy to see, including us. The PS4 Pro is also capable of a ‘Cinematic Mode’ which emphasizes image quality, and for owners of compatible 4K HDR displays, boasts a beautiful dynamic 4K image at 30fps. For those of you without a 4KTV, PS4 Pro users can still run in cinematic mode but will get a native 1080p display that is generated from a render target of 1440p. This results in a smoother image with less aliasing artifacts.

Narratively speaking, the story remains the same but Bluepoint Games’ have added some mysterious new collectibles, something I won’t get into too much for fear of spoiling it for anyone.

All that being said, the game isn’t without its flaws.. The camera for one could do with some more tweaking as it still has difficulty positioning itself in certain moments but these aren’t repetitive enough to take away from the overall experience. Also, and something Bluepoint Games couldn’t necessarily change is the somewhat repetitive nature of the whole thing but I guess that plays into the whole appeal of the game in the first place.

In the end, Bluepoint Games have done a fantastic job of balancing old with the new. Taking on the responsibility of remaking one of the most iconic games of all time from scratch is a seriously risky decision but the Bluepoint team has executed it perfectly. Fans of the original and newcomers alike are sure to fall in love with this game, either for the very first time or all over again.

TheEffect.Net was supplied a review copy of Shadow of the Colossus free of charge from Sony Interactive Entertainment Europe.

In the end, Bluepoint Games have done a fantastic job of balancing old with the new. Taking on the responsibility of remaking one of the most iconic games of all time from scratch is a seriously risky thing but the Bluepoint team has executed it perfectly. Fans of the original and newcomers alike are sure to fall in love with this game, either for the very first time or all over again.