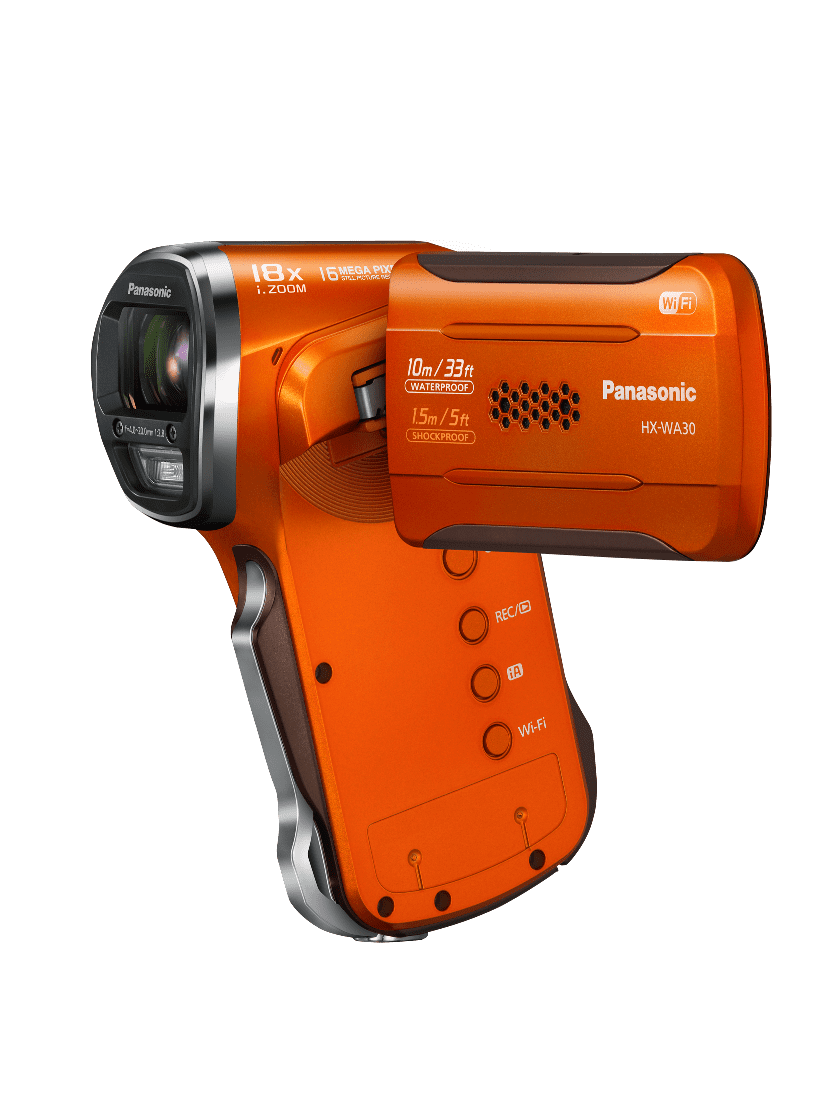 Adding to its award winning portfolio, Panasonic is pleased to announce the release of three new Full-HD upright camcorders – introducing the HX-WA30, HX-WA3 and HX-DC3.  With their ergonomic upright design the new additions are perfect for stable single-handed shooting allowing the user to capture action footage with ease.  With different features to cater for different levels of activeness, rest assured there’s a perfect model for everyone this year!

Perfect for the adventurous shooter, the all-singing, all-dancing waterproof, shockproof, freezeproof and dustproof WA30 with built-in Wi-Fi is a small camcorder with some big attitude.

Waterproof, shockproof, freezeproof and dustproof, this new addition has been designed to handle tough situations, making it possible to shoot even in harsher conditions.  Enjoying increased toughness from its popular predecessor, the WA30 is set to be a firm favourite.

Sharing footage is effortlessly easy thanks to the built-in Wi-Fi functions that link with a smartphone or tablet for easy sharing, and live view control.  Recorded footage can be easily played on a smartphone or tablet and the users can also save selected scenes, and easily share them on SNS with drag & drop operation.  Installation of the “Panasonic Image App” allows the users to operate zoom in/out, shutter ON/OFF and other functions from a distance while watching the results in live view on a smartphone or tablet.  Playback of high-resolution photos or videos is also easy on a DLNA-compatible TV without having to insert an SD Memory Card or connect any cables.

Zoom in and Shoot

Boasting a 5x Optical zoom and 18x Intelligent zoom, shooting far away subjects is effortless and the 28mm wide-angle lens fits more people and more of the background into the frame than conventional models. If users want to capture still images as well – no problems, the WA30 captures 16 megapixel still images.

By using the Eye-Fi™ card, users can save files recorded on the card on a PC, or upload them to SNS via a wireless network. Users can also directly transport the data to their device (smartphone, tablet etc.) without connecting another access point.

Sitting alongside the WA30, the WA3 is waterproof to 5 meters, freezeproof to -10°C and dustproof, ensuring it can confidently capture action footage.  Perfect for sun holidayers, winter holidayers, cyclists, walkers and skiers, the versatile WA3 will be used all year round. In addition to its tough design, the WA3 boasts an Intelligent 18x Zoom allowing users to  shoot faraway subjects with ease, and images will be blur free thanks to the Active E.I.S.

Two in One Hybrid Camera

As with the WA30, the WA3 can confidently capture 16 megapixel still images offering users the flexibility of still or moving images depending on the situation. Users can also capture 2-megapixel still images while recording a video by simply pressing the Photoshot button. Highly versatile, the WA3 and WA30 feature the Burst Shooting function which allows the camcorder to snap up to 10 consecutive 3-megapixel still images, which are fired off at 1-second intervals for a total of 12 continuous images in about 1.2 seconds. Perfect for getting good shots of subjects in fast motion, users just fire off a number of shots without stopping, then keep the best ones and delete the rest.

The upright DC3 is the perfect lifestyle camcorder to capture all your leisure and fun!  Suitable for active use thanks to the Active E.I.S for blur-free shooting, the DC3 also features an Intelligent 15x Zoom, ensuring users can capture subjects in the distance with ease.

Incredibly slim and compact, the DC3 weighs a mere 162g – not dissimilar to the weight of a smartphone.  Belying its sleek size, the DC3 can record Full HD video (1920 x 1080), 16-Megapixel still picture recording, as well as offering Creative Control and being Eye-Fi Compatible. With its pocketable dimensions and ergonomic design the DC3 is the perfect lifestyle camcorder for capturing those spontaneous moments with ease.