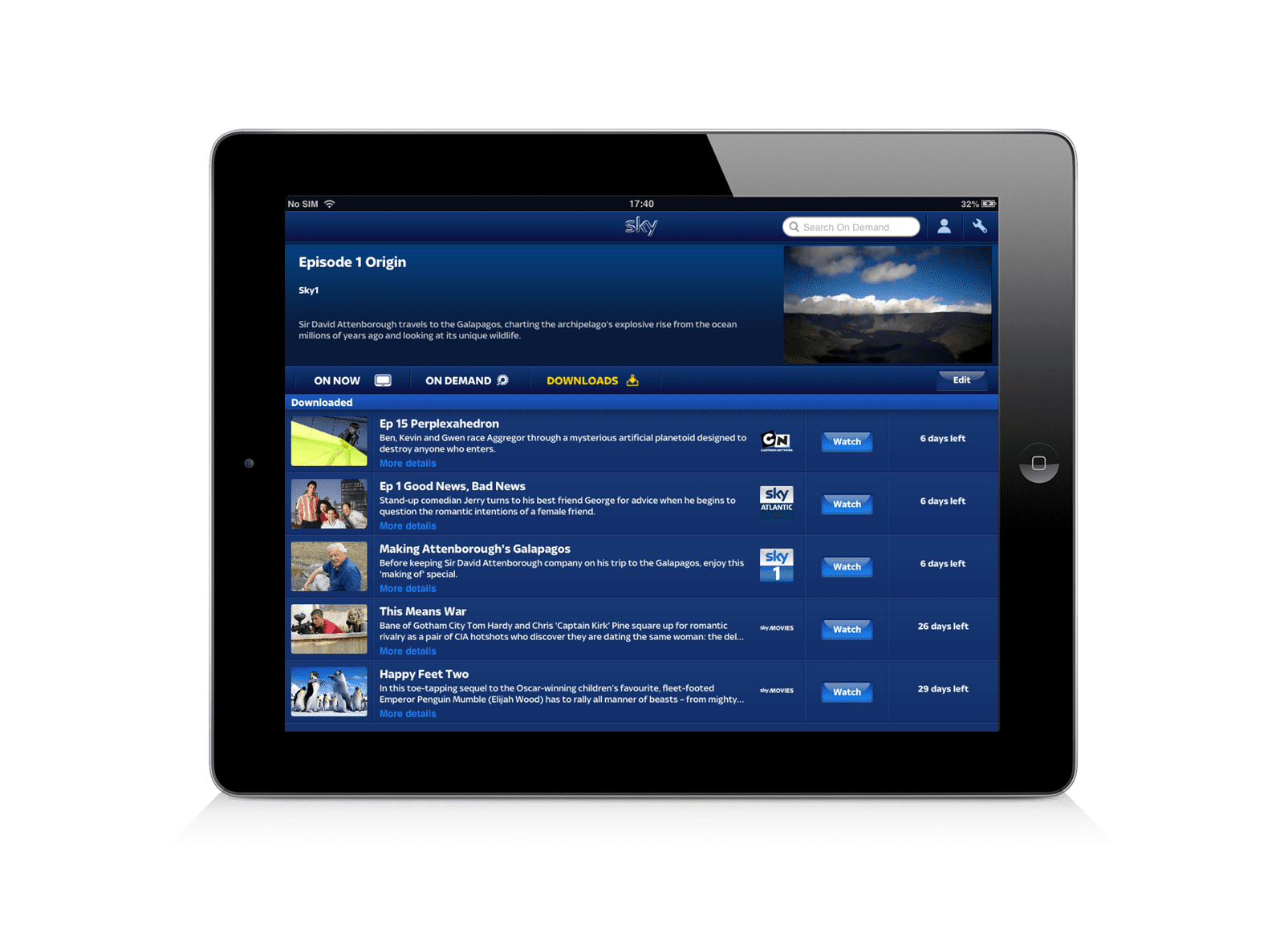 New research commissioned by Sky reveals that almost 83% of Irish commuters have little or no access to an internet connection on their journey to work. When commuting respondents tend to “check already downloaded emails” (44.2%), “play games on their phone” (46.5%) and read (51%). Irish commuters’ biggest frustrations are “cramped conditions” (48.4%) and “not making the most of your time when you could be doing something else” (22.6%).

The research coincides with the launch of Sky Go Extra, a new subscription service which will help Sky customers make the most of their “forced downtime” when commuting. Available to all Sky TV homes for just €6 per month, the new service delivers even more flexibility to customers by allowing them to download movies and TV shows in line with their Sky TV subscription to their smartphone, tablet, laptop or MacBook via Wi-Fi to watch offline later. So whether in a car, on a flight, on the train, bus or Luas, Sky customers will be able to enjoy a wide range of content literally anywhere, not just where they can find a reliable Wi-Fi or high-speed mobile connection.

According to Sky’s research access to technology on the move is important in people’s day-to-day lives with more than three-quarters of respondents owning a tablet or smartphone and 81.8% of those using it on their commute. Over 70% of commuters feel frustrated when they don’t have an internet connection on their journey, and will often resort to mundane activities such as “watching other commuters” (18.4%), or sleeping (24.2%), with over a quarter of all commuters claim to be bored on their journey. The research found that two thirds of commuters take the bus.

There is a difference between the sexes in average travelling times to work with 18% of males commuting more than 2 hours a day compared to females (10%). Males (32.2%) get more frustrated when the Wi-Fi drops in and out of signal compared to females (21.1%) and tend to watch more downloaded movies on their tablet (16.1%) than females (6.2%).

The launch of the new service builds on the enormous success of Sky Go, which offers Sky customers access to live and on demand programmes and films from up to 43 channels on a wide range of internet-connected devices, and now attracts more than 3 million unique users in the UK and Ireland each quarter.

In addition to being able to download content, Sky Go Extra customers are also able to register for Sky Go on up to four, rather than two, internet-connected devices, giving Sky households even more flexibility over when and where they enjoy the service.

Sky Go Extra is the first mobile TV subscription service in the UK and Ireland to offer Hollywood movies to download and watch offline. With a choice of hundreds of titles exclusive to Sky Movies available to download at any one time, Sky Go Extra customers who subscribe to the Sky Movies pack will be able to download blockbuster releases around six months after they have ended their run in cinemas. Once downloaded, customers can store the films on their portable devices for up to 30 days.

Blockbusters such as Avengers Assemble, Sherlock Holmes: Game of Shadows and Pirates in an Adventure with Scientists will all be available for download through the service, alongside the entire James Bond film catalogue, containing all twenty-two official Bond films. All titles are available exclusively to Sky Movies subscribers and are not available on any other subscription movies service or TV channel for at least a year after they first appear on Sky Movies.

Sky Go Extra customers will also be able to download the latest shows from channels including Sky Atlantic, Sky 1, Sky Living and Sky Arts, as well as partner channels such as Nickelodeon and Disney. This includes the best of the US, such as Girls and The Following (Sky Atlantic), as well as Sky’s own home-grown hits such as Stella, An Idiot Abroad and Trollied (Sky 1). Customers with a 64 GB iPad will be able to store in excess of 400 half-hour shows and more than 80 movies.

Mark Anderson, Director of Sales & Marketing at Sky Ireland, comments: “Building on the ever-growing popularity of Sky Go, Sky Go Extra is the only mobile TV subscription service in the UK & Ireland which means customers can download the latest Hollywood movies to take with them while they are on the move, alongside a great choice of TV from Sky. The research shows that commuters are frequently frustrated with a lack of things to do in their ‘forced downtime’ so Sky Go Extra gives the perfect solution for the boring journeys to and from work. Together with our comprehensive TV On Demand service and our range of award-winning apps, we continue to deliver helpful and clever ways for Sky households to enjoy even more flexibility over when, where and how they enjoy Sky.”

During 2012, millions of Sky customers have used Sky Go to watch movies on demand, with Bad Teacher, Transformers: Dark of the Moon and Captain America: The First Avenger the three most popular movies on Sky Go last year. Entertainment series on demand have also proven popular on Sky Go, with more than 2.5 million views of the second series of An Idiot Abroad and 1.1 million views of the latest season of Game of Thrones.

Sky Go Extra is the latest in a series of recent developments from Sky that help customers take full control of their TV viewing. This includes Sky’s comprehensive TV On Demand service giving TV viewers with a Sky+HD box and a broadband connection even greater flexibility and control over how they watch their favourite shows, at no extra monthly cost. Sky also offers its customers a wide range of award-winning apps at no extra cost, including the popular Sky+ app, which can even be used as a remote control for the Sky+HD box.

To sign up to Sky Go Extra, all customers need to do is visit http://www.sky.com/ireland/offers/sky-go-extra. Once they’ve done this, the next time they enter the Sky Go app they will be able to download programmes and register two more devices. To provide even more flexibility, Sky Go customers can cancel the service at any time, subject to giving 31 days’ notice. Sky Go customers will also be able to sign up for a two-month free trial of Sky Go Extra until the end of March.