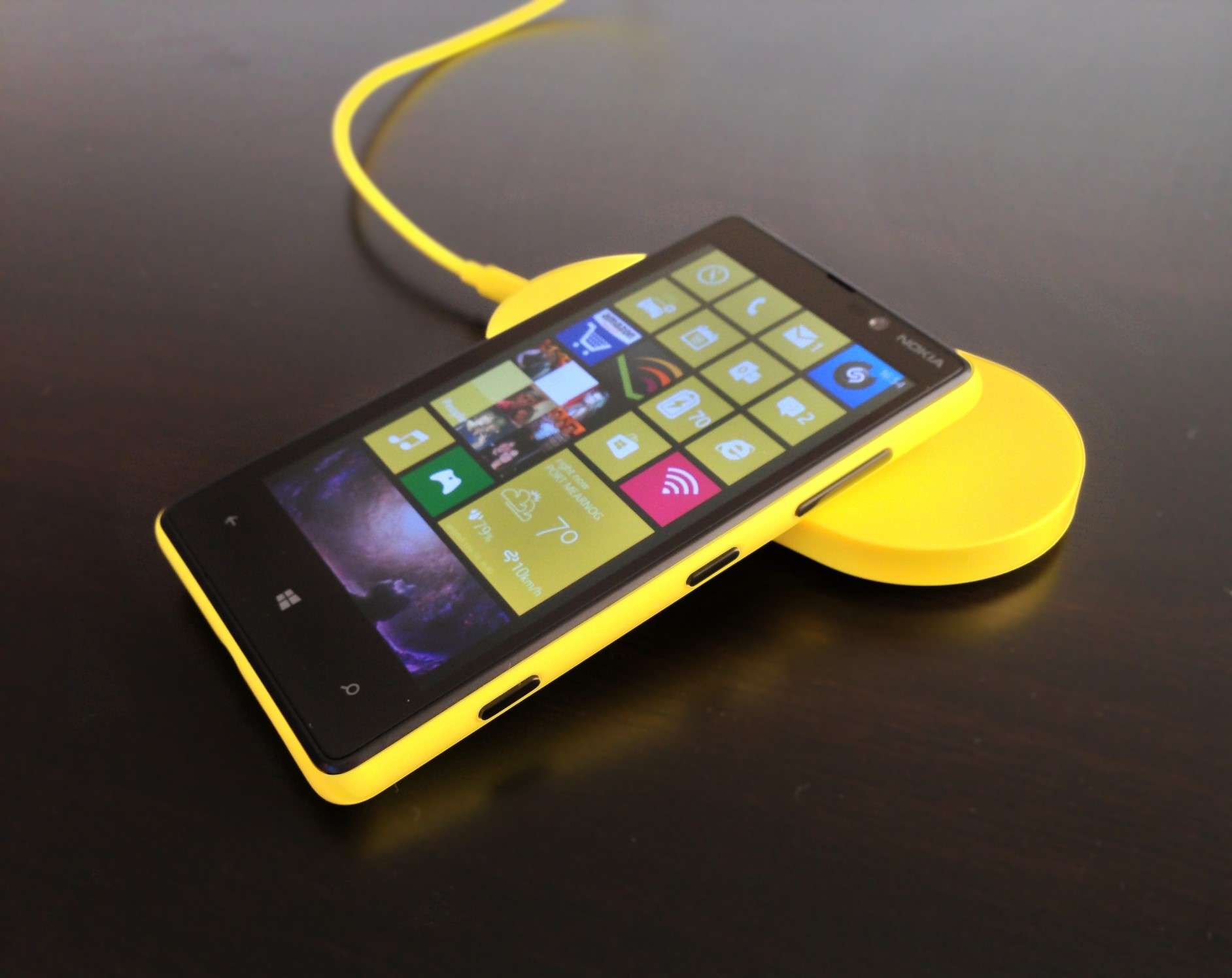 We’re no strangers to Nokia devices here, or Windows Phone devices for that matter, but the Lumia 820 is our first taste of Microsoft’s latest version of its’ mobile operating system – Windows Phone 8.

We already got our hands on the Windows Phone 8X by HTC late last year, which is ‘the signature Windows Phone device’, so how does Microsoft’s BFF Nokia set their WP8 devices apart from the 8X and 8S?

Read on to find out. 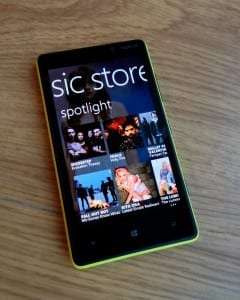 The Nokia Lumia 920 is Nokia’s current flagship Windows Phone 8 device and as you would expect it’s designed and built to the highest possible standards – the 820 does not reach these standards but it gets close.

That’s not to say that the 820 is ugly or poorly made, on the contrary – it’s solid and has a reassuring heft to it, the rounded edges and matte finish are not uncommon on a Lumia device by now but it’s definitely leagues above the older generation of Lumia devices in design, it just doesn’t have the same allure and appeal as the higher-end Lumia 920.

Nokia seem to have taken a more minimalist approach to design with the 820 which becomes apparent when you notice that even the Nokia branding is small and even in odd places, the rear branding will remain covered by your hand any time the phone is in use.

The back shell of the 820 is removable and available in a range of colours including wireless charging options. The wireless charging covers contain a small square plate in the middle of the case (on the inside of course) which protrudes ever so slightly through the case.
Not enough to visually see or feel, but enough to make the phone spin and not sit flush on a hard surface. 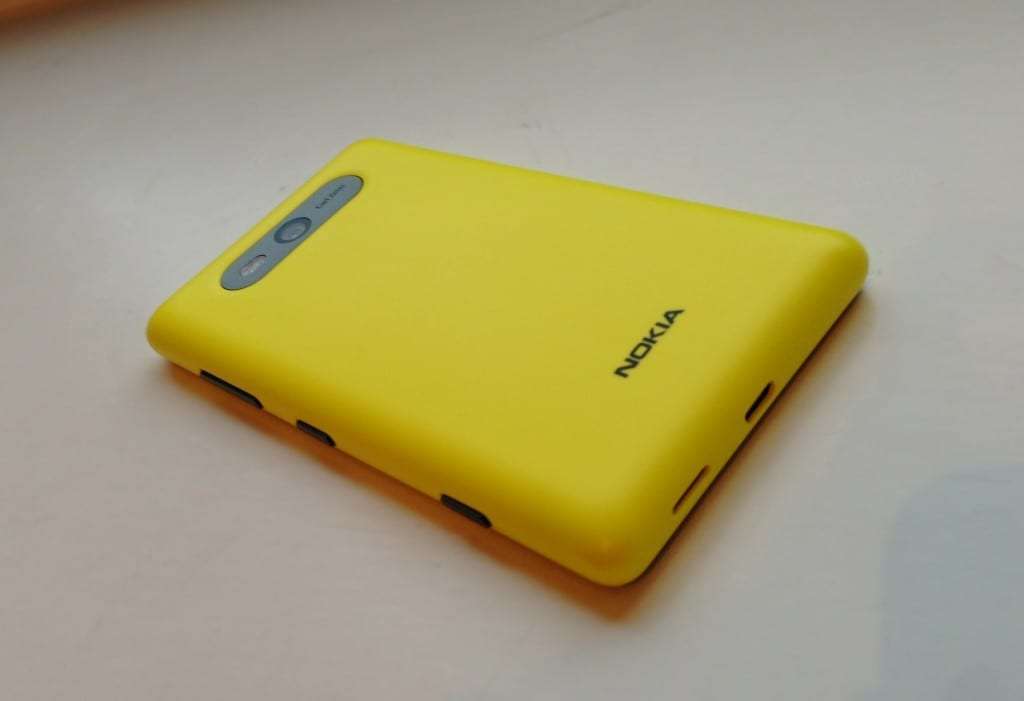 The usual Lumia button layout is in effect here, with nothing on the left side of the device, the volume, power and lock buttons on the right, headphone jack up top and speaker and mini-USB port down the bottom.
An 8MP Carl Zeiss lens with dual LED flash is on the back-top of the device with a front-facing VGA shooter above the 4.3” screen. 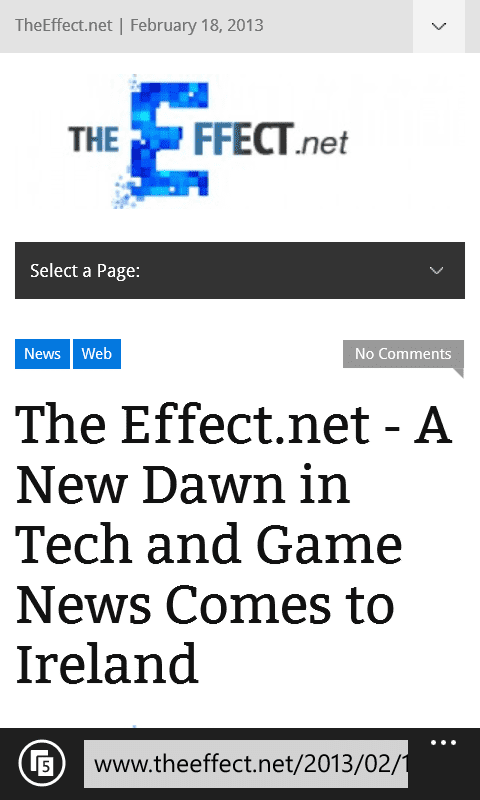 It’s heavier than we expect most people would like, especially when put up against the likes of the iPhone 5 or Samsung GSIII, but it passes the pocket test with ease.

Unfortunately the nice design and smooth edges are somewhat of a double edged sword for the 820 as it can be quite difficult to use with one hand, often slipping sideways while typing or having to hold it awkwardly to avoid accidentally hitting the power/lock button.

This problem is highlighted by the screen size, having to reach to the opposite corner with one-handed use is quite tricky.

The 4.3 inch AMOLED screen here is a nice size, although given the slight awkwardness of the shape it might be easier to use were the screen brought down to even 4 inches.

That’s a small gripe though, the biggest gripe we have with the screen is its’ resolution. 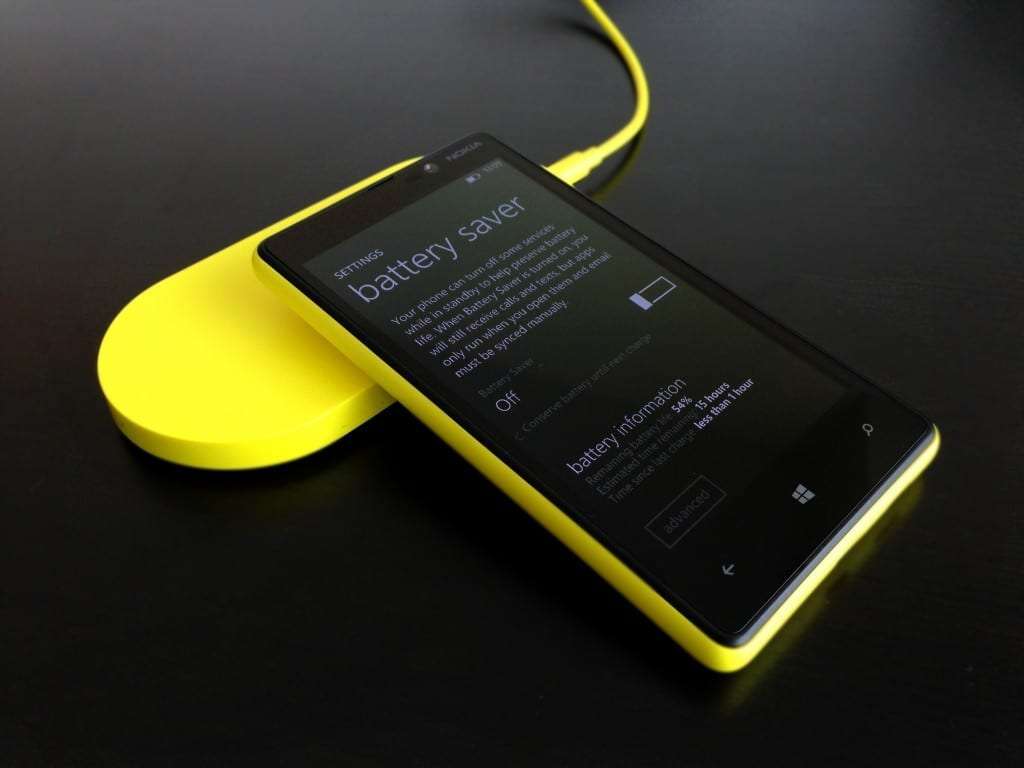 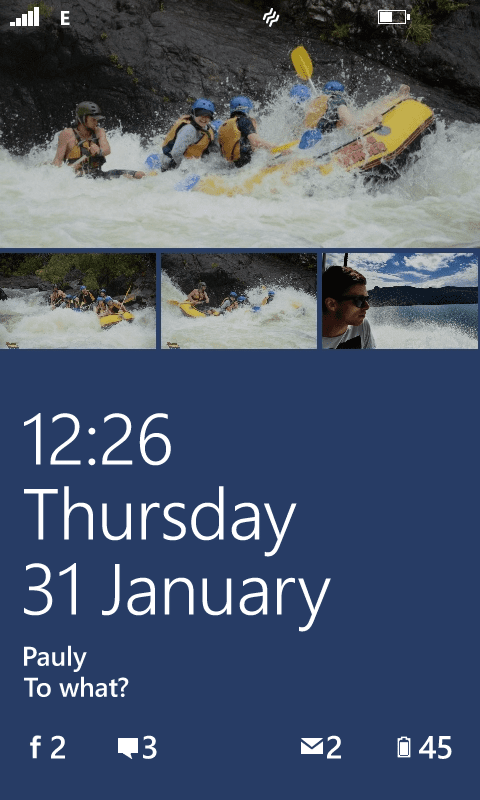 We suspect the reasoning behind this was to differentiate the 820 from the 920, considering the 820 has a stylish design and wireless charging and is cheaper, Nokia need to make sure that people don’t just choose the cheaper option.

The screen could also stand to be a bit stronger it seems as with only two weeks of regular usage, our device has one noticeable scratch and another smaller one.

On a whole though, the screen isn’t bad, colours look great and the blacks are extremely deep given that Nokia has included their ClearBlack type display – we just would have expected better given that one of the biggest criticisms for the older generation of Lumia devices was that they had a poor screen resolution (not exactly Nokia’s fault, Microsoft enforced these specs up until Windows Phone 8).

While not containing the Lumia 920’s new and revolutionary optical image stabilization technology, or its’ great low-light capabilities, the 8MP shooter here is quite good and can hold its own against most other smartphones, even ‘higher-end’ ones.

Taking a photo is simple and easy too with the phone unlocking and starting the camera if you hold down the camera shutter button for a second or two – always a nice touch in Windows Phone.

Another great addition which came in Windows Phone 8 is Lenses, which are essentially photo apps that allow you to create panoramas, gifs in Cinemagraph or SmartShoot which takes a series of photos and allows you to pick the best faces to use in the final photo. 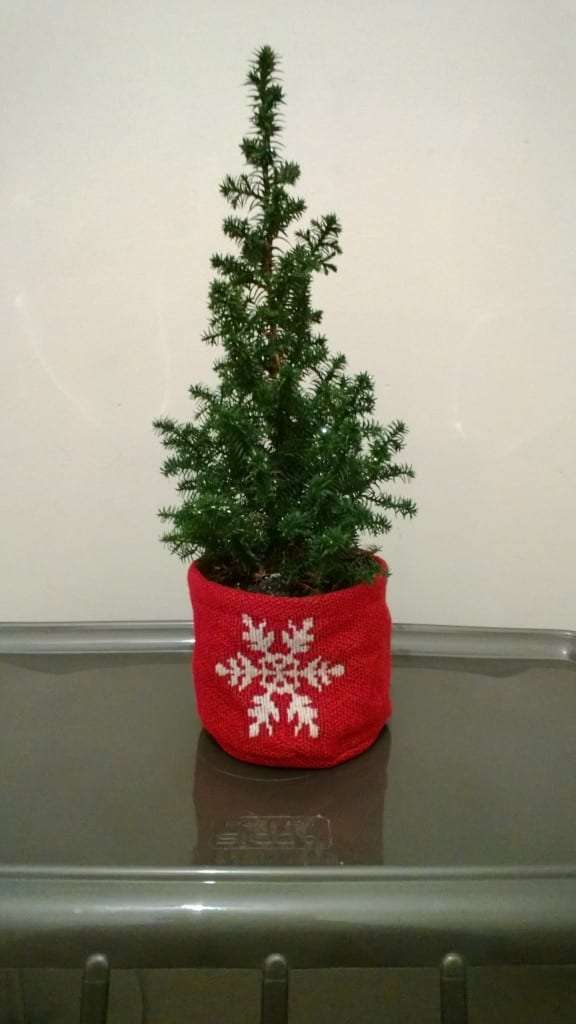 Developers can make their own lenses to take advantage of the camera so expect to see some interesting Lenses in the future.

Low light performance is good too, as with most smartphones the flash can wash out your subject and make everything too white but in general it’s more than capable for a dark pub/streetlight shot.

The 1.5 GHz dual core processor and 1GB of RAM help to make the 820 power through tasks and make lag a thing of the past. With Windows Phone 8 allowing up to 8 apps suspended for multitasking instead of the old 5, the entire experience definitely feels much smoother and faster.

Windows Phone 8 brings the updated Start Screen with resizable Live Tiles (which Windows Phone 7 users should now be getting in the 7.8 update) and it can’t be overstated how much of a step up the new Tiles are.
It’s now possible to have much more on your Start Screen while taking up less space than you would have needed on WP7. 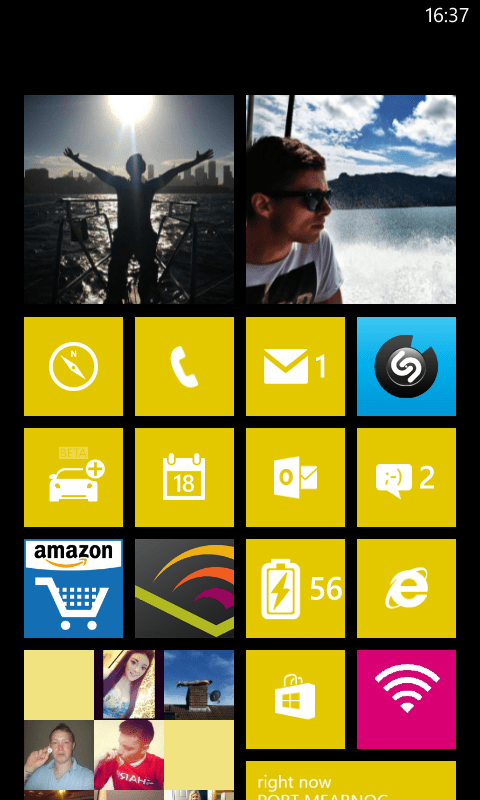 The app selection for Windows Phone is now well over 120,000 so while there is an extremely large selection, it is missing some popular favourites such as Instagram or Temple Run.

Although most apps that are missing do have some kind of unofficial third party app to fill the void and Microsoft has been working hard with developers to improve their apps such as Twitter and Facebook, both of which had downright abysmal apps back when Windows Phone 7 launched.

NFC, Bluetooth and Wi-Fi are all present here and all work just fine, Wi-Fi will now have the option to stay connected while the phone is asleep – a laughable change if you’re coming from iPhone or Android but a new and welcome change for Windows Phone.

Music lovers are not short of choice with the Lumia 820 either, if you want a Spotify – like service then Xbox Music is for you. We praised it in our HTC 8X review and will gladly praise it again, for €9.99 a month you can access over 30 million songs to stream or download and your playlists and library syncs between Windows Phone 8, Windows RT and Windows 8 – very useful.

If that doesn’t sound like your thing then Nokia Music could fill the void, although it’s less of a demand service and more of a music discovery service.

The beauty of Nokia Music is that you don’t even need to sign up for an account, just select a playlist and hit play. You’re then allowed up to six skips an hour due to radio licensing laws but Nokia are rolling out Nokia Music+ which allows unlimited skipping for around €3.99 a month – that should reach Ireland soon. 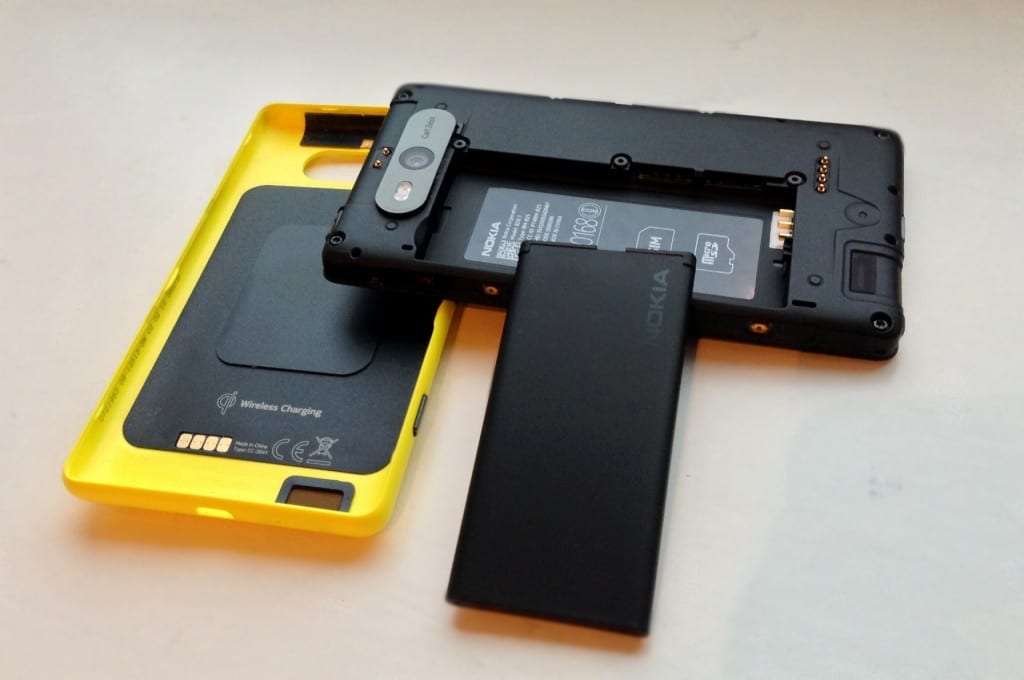 The most interesting aspect of the battery is the Wireless Charging, it might seem like a gimmick but once tried out for yourself, the wow factor cannot be understated.

Wireless Charging does take longer to charge the phone but the idea is you have your phone resting on it most of the day at your desk, or on your nightstand overnight so that shouldn’t matter. 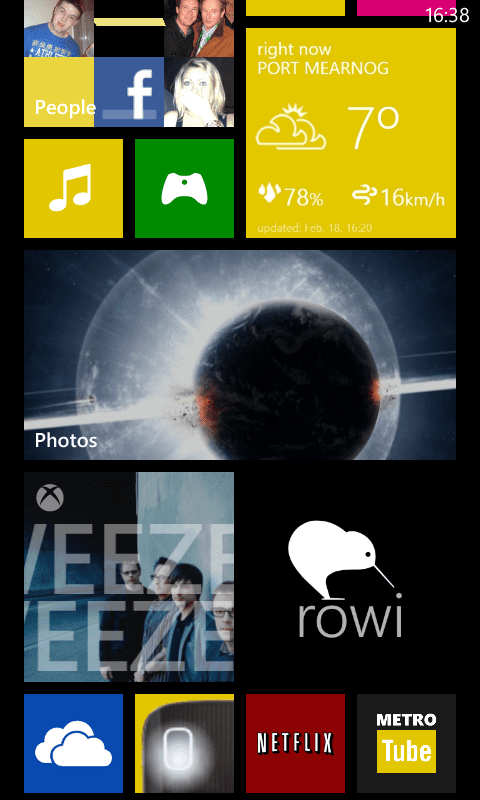 Nokia Ireland has come under a lot of fire lately due to pushing the Lumia 820 instead of the fuller – featured Lumia 920, and while it is true that the 820 has some sacrifices in hardware and software, it most definitely shouldn’t be overlooked.

The screen resolution is not what we’d want in a modern smartphone, the device is unwieldy and awkward to hold and of course the lack of big name apps on Windows Phone 8 is still a major annoyance.

The good outweighs the bad though as for the price of a mid – range smartphone, you’re getting Wireless Charging, a great camera and very snappy performance inside.

Nokia continue to provide the incentive with exclusive apps and services like Nokia Music and free turn by turn GPS in Nokia Drive+.

If you’re looking to take the leap to Windows Phone 8, the Lumia 820 is a solid choice and shouldn’t be overlooked against similarly priced Android devices.