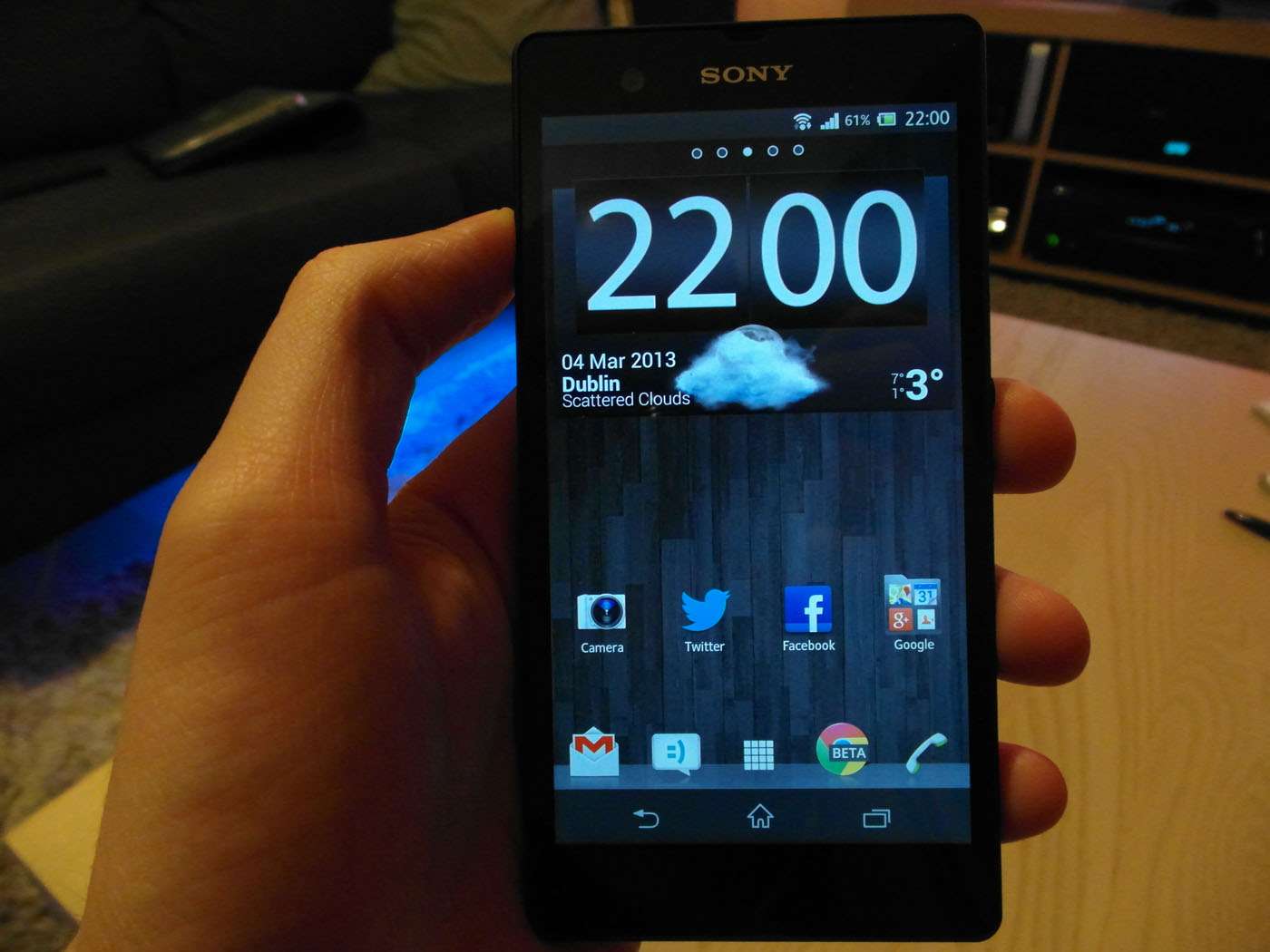 I’m glad to see a the new batch of phones hitting the market and for all accounts, the manufacturers are really taking things seriously (not that they weren’t before, but with such stiff competition out there now between the manufactures, I guess it only makes sense!) and with that in mind here’s our Sony Xperia Z Review. 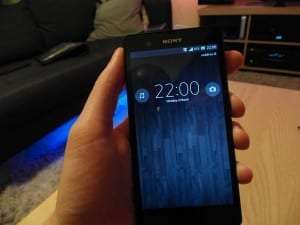 The Sony Xperia Z really needs to be seen to be believed. That’s quite a statement for a phone, but at 7.9mm thin. Water and Dust resistant. 5inch 1080p Screen and a 1.5ghz Quad Core S4 Pro Chip and fully 4G LTE compliant, it’s hard to wrap your head around how all that is in a phone like this.

“Yes, you read that right, glass on all sides.”

Lets start with the outside. The frame is, or as Sony call it, the skeleton, is made of a glass fiber plastic type material that’s used in race cars. It gives the phone it’s structure and wraps around every corner and edge. It really adds to it feeling secure in your had! On the front and back (and the sides actually) is glass. Yes, you read that right, glass on all sides. Sony haven’t officially said, but the glass is supposed to be DragonTrail, which is supposedly better than Gorrila Glass 2 from any demos I’ve seen. On top of this, Sony have also pre-installed an anti-shatter / scratch film on the front and back. This much glass definitely leads it to be a finger print magnet, but it’s not as bad as I thought it would be to be honest. 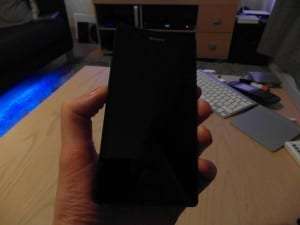 The front is a solid slab with the only breaks being the symmetrically placed ear phone and mic spaces at the top and bottom. There is  a nice and Small SONY logo above the screen. To the left is 2mp front facing camera and to the right is the sensor group and the notification LED (which is an RGB LED!) 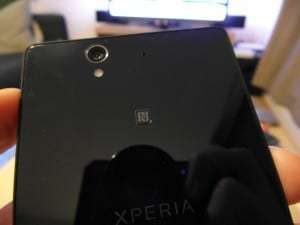 On the back, again, it’s nice and clean save for the noise cancelling mic pin hole and the camera and flash modules at the top. Sony have included a 13mp Exmor RS BSI camera. This sounds like it’s going to be the bee’s knees and while it’s a great camera, Sony are definitely doing something weird with the post processing of the images. More on this later. Right in the middle of the back is a nice Xperia log and down the bottom are the safety / product markings. 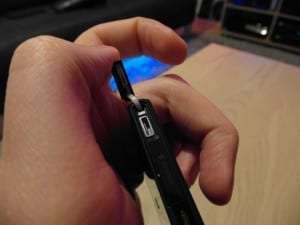 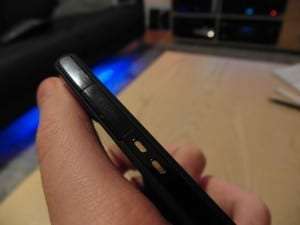 “you can add a MicroSD card”

The bottom edge only has more product info. The left edge gets a bit more interesting. There are 2 gold contacts for a dock, above them is where you can add a MicroSD card (hidden behind a flap) and above that is the MicroUSB charging port (again hidden behind a flap). Actually, when ever i say there is a port somewhere, take for granted it’s behind a flap. These are there to seal the phone and make it water / dust resistant. 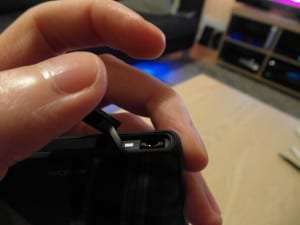 On the top there is the 3.5mm head phone jack and on the right is the MicroSIM Card slot and super sexy power / lock screen button, the volume rocker and then the speaker. This speaker is placed kinda weird to be honest, but it’s nice and loud and when watching videos it’s placement works but when you’re holding the phone in your right hand, you pretty much always block the speaker, it’s a minor niggle, but a niggle none the less. 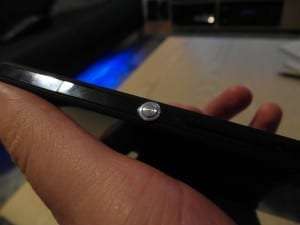 Over all, I’m in love with the look and feel of this phone. It’s the biggest phone I’ve had to date except for the Galaxy Note series, but I’m glad Sony had the common sense to place the power button on the right and not the top. It just makes sense and well, I think all manufactures of phones with screens larger than 4.3inches should be made put the power on the side, as it just makes the phone easier to use. It feels solid and I’m not afraid I’m going to break it or damage it at any point. It really is one of the most solid phones out there and deserves it’s place as Sony’s current flag ship model. 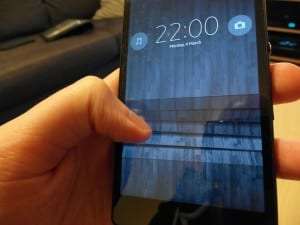 “This screen is awesome”

Right, on to the Screen / Software. As mentioned, the Xperia Z has a 5inch FULL HD 1920x1080p screen with mobile Bravia Engine 2 tech inside (note this only works when viewing photos / video / youtube, and it’s not system wide). The pixels are so small you can’t see them. Is this potentially over kill in a phone? Sure! But am I complaining? Heck no! This screen is awesome. You’ll read reports online of this screen been washed out and having bad viewing angles, but don’t believe everything you read. To me, while the viewing angles are not as good as some phones out there, they are noting to complain about. I’ve come from the Galaxy Nexus with its 720p OLED Screen where blacks are amazing and the viewing angles are to. Would I go back because of the screen. No, no i would not. 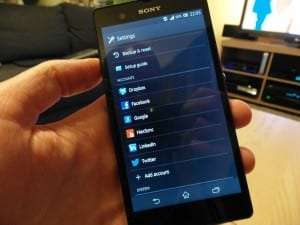 The software on the Xperia Z is the closest to stock android that I’ve experienced. It’s got the same on screen buttons, similar settings configuration and the all round navigation is very close to what I’ve come from.  In terms of bloat ware, there is some Sony stuff on there (Music / Movies Unlimted, Playstation Mobile and various Xperia bits and bobs), but thankfully most of this can be uninstalled, so no worries there. The gallery and walkman apps are nice and they are the ones I’ve been using as I didn’t feel a need to download a new one.  I’m not really sure what else to say about the software. If you’ve used a Sony mobile in the past you’ll be familiar with it, heck if you’ve used android in the past, you’ll be familiar with it. It took me no time to get up and running and using the phone, so there won’t be any problems there 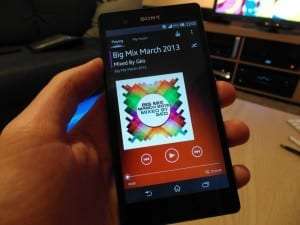 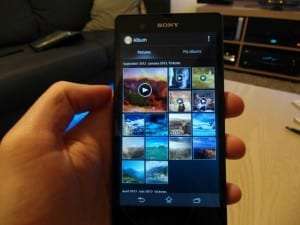 “In good lighting conditions with Superior Auto+ mode on, the shots are excellent”

Now that 13mp Camera (which when set to ‘Superior Auto+ mode, is 12mp and if you want to shoot in widescreen aspect it goes down to 9pm) Honestly, I thought the shots would be better. Don’t get me wrong, they are good, but what every compression / filters Sony is applying to the shots needs to stop. To me, it’s making them too soft and muddy looking. In good lighting conditions with Superior Auto+ mode on, the shots are excellent, but once you leave those conditions it tends to be less so. I just found them lacking in details really. The colour reproduction was great and the saturation was pretty good most of the time, but zooming in, I expected more from a 13mp shot. 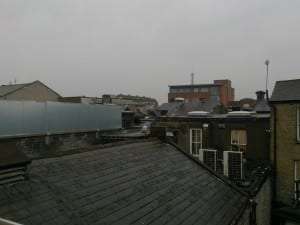 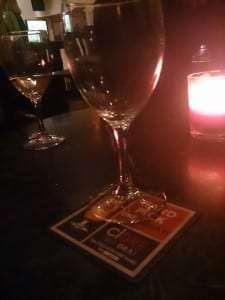 Video is where this camera excels. Not only can it shoot 1080p it can also shoot video in HDR mode, which is something completely new and well, if you’re shooting out doors or in conditions where you’ve got high contrast areas, it’s awesome. Love this mode and the video shooting quality of the camera. 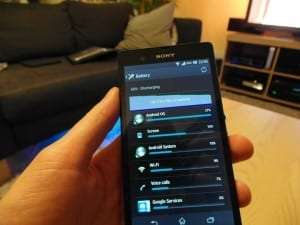 ” easily see you through a ‘normal’ day”

Last thing I want to touch on is the battery. It’s a 2330mAh battery and it’s not replaceable (as is fairly normal practice these days). It will / should easily see you through a ‘normal’ day. For me, i get up about 7.30am, listen to music for 30mins on the way to work and all days it’s sync’ing 3 google accounts, twitter, facebook, etc.. and I’ve gotten home and still had 70% battery left at 6.30pm. If I start using it more heavily (QA’ing builds for work, playing games, browsing), you will see the battery be consumed much more, but honestly if you don’t expect that, then you really shouldn’t be using a phone! To help with this excessive battery drain, Sony have included their much touted ‘Stamina Mode’. This basically turns off all connectivity / apps when the screen is off. You can ‘white list’ certain apps to keep running / communicating if you want as well, which is nice. Sony states it will add about 4 days standby time to your phone, and while I can’t verify this, I can see the reasoning behind it. Personally, i want my phone to be connected and to be checking for email etc… so it’s not a mode for me! 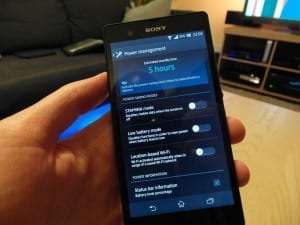 “This is the best phone Sony has ever made”

How would I rate the Xperia Z. Let’s put it this way, it takes a lot to impress me when it comes to phones and even more for me to say I’m going to put my money where my mouth is a actually buy one of these. I was so close to upgrading from a Galaxy Nexus to a Nexus 4 and well, I’m glad I didn’t. This is like a Nexus 4 on steroids (not in terms of size though). Even though it has the same internal processor / ram config, it consistently outpaced it in benchmarks / general every use. 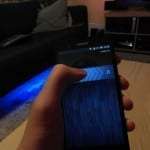 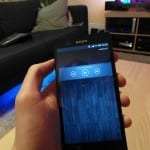 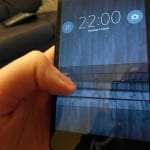 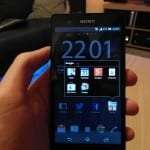 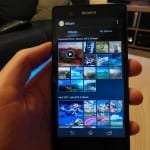 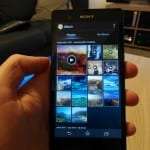 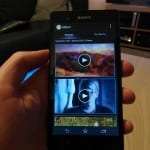 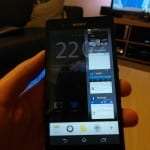 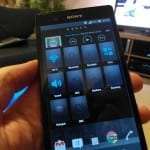 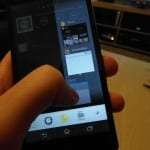 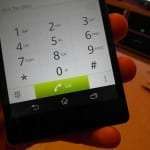 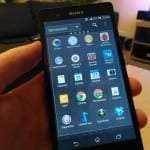 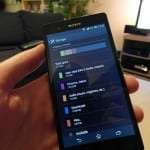 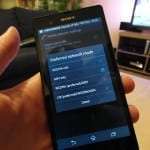