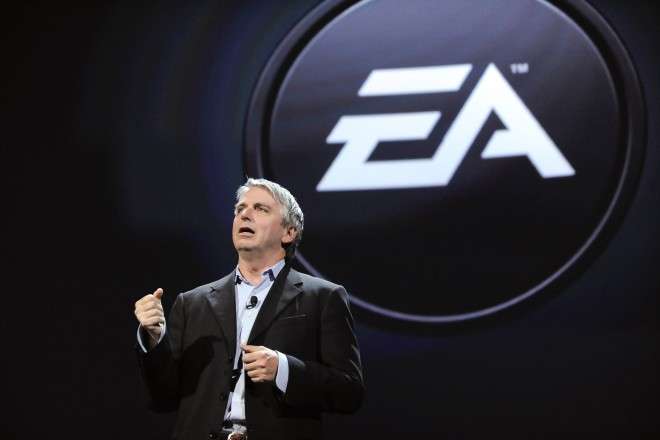 John Riccitiello Steps Down as CEO of EA – Updated

Update -The Wall Street Journal has gotten hold of Riccitiello’s resignation letter which we’ve re-posted below.

John Riccitiello has stepped down as the CEO of Electronic Arts and will be replaced by former EA CEO Larry Probst until a permanent replacement can be found for Riccitiello.

Riccitiello became EA’s CEO in 2007 and has always had a more favourable reputation than other gaming CEOs such as Bobby Kotick who is hated by fans.
It’s know that Riccitiello actually plays a lot of games, including EA’s competitors and not just their own.

The full press release can be found below.

REDWOOD CITY, Calif.—(BUSINESS WIRE)— Electronic Arts Inc. (NASDAQ: EA) today announced that John Riccitiello will step down as Chief Executive Officer and as a member of the Board of Directors, effective March 30. The Board has appointed Larry Probst as Executive Chairman to ensure a smooth transition and to lead EA’s executive team while the Board conducts a search for a permanent CEO. The Board will consider internal and external candidates with the assistance of a leading executive search firm.

Mr. Probst has played a leadership role at EA since 1991. In addition to serving as Chairman of the Board since 1994, he previously served as the Company’s CEO from 1991 to 2007. As CEO, Probst successfully grew the Company’s annual revenues from $175 million to approximately $3 billion, led EA into new platforms such as mobile, online and other emerging markets and expanded its international presence to more than 75 countries.

“We thank John for his contributions to EA since he was appointed CEO in 2007, especially the passion, dedication and energy he brought to the Company every single day,” said Mr. Probst. “John has worked hard to lead the Company through challenging transitions in our industry, and was instrumental in driving our very significant growth in digital revenues. We appreciate John’s leadership and the many important strategic initiatives he has driven for the Company. We have mutually agreed that this is the right time for a leadership transition.”

On behalf of the Board, Lead Director Richard A. Simonson stated, “As we begin the CEO search, we are fortunate that Larry, who has a proven track record with our employees, partners and customers, has agreed to assume a day-to-day leadership role as Executive Chairman. He has 16 years of experience as CEO of EA and a deep understanding of the Company’s strategy, management team, business potential and industry trends.”

Mr. Riccitiello stated, “EA is an outstanding company with creative and talented employees, and it has been an honor to serve as the Company’s CEO. I am proud of what we have accomplished together, and after six years I feel it is the right time for me pass the baton and let new leadership take the Company into its next phase of innovation and growth. I remain very optimistic about EA’s future – there is a world class team driving the Company’s transition to the next generation of game consoles.”

To Everyone at EA –

I am writing with some tough news.  I have resigned my position as EA’s CEO.  I will be around for a couple of weeks, and I hope to have the chance to say goodbye to many of you.  Larry Probst will be stepping in as Executive Chairman to help smooth the transition.  Larry first hired me at EA in 1997 and he was an incredible leader for the company during the 16 years he served as CEO.  While he will continue to be the Chairman of the US Olympic Committee, he will also provide leadership for EA until a permanent CEO is appointed.

My decision to leave EA is really all about my accountability for the shortcomings in our financial results this year.  It currently looks like we will come in at the low end of, or slightly below, the financial guidance we issued to the Street, and we have fallen short of the internal operating plan we set one year ago.  And for that, I am 100 percent accountable.

Personally, I think we’ve never been in a better position as a company. You have made enormous progress in improving product quality.  You are now generating more revenue on fewer titles by making EA’s games better and bigger.  You’ve navigated a rapidly transforming industry to create a digital business that is now approximately $1.5 billion and growing fast.  The big investments you’ve made in creating EA’s own platform are now showing solid returns.  I believe EA is alone in mastering the challenges of building a platform for our games and services – a platform that will provide a more direct relationship with our consumers.   You are number one in the fastest growing segment, mobile, with incredible games like The Simpsons: Tapped Out, Real Racing 3, Bejeweled, SCRABBLE and Plants v. Zombies.  You have worked to put EA in a position to capture industry leadership on the next generation of consoles; and I believe two of our titles – Battlefield and FIFA –  will be among the top few franchises in the entire industry.  And the industry’s most talented management team – Frank, Rajat, Peter, Gaby, Andrew, Patrick, Blake, Joel and Jeff — are certain to lead the company to a successful future.

I remain an incredible fan of EA and everyone who works in our world – from Stockholm to Seoul, Orlando to Edmonton, Guildford, Geneva, Cologne, Lyon, Bucharest, Montreal, Austin, Salt Lake, LA and, of course, EARS.  My hope is that my travels and yours allow us the opportunity to talk more in the months and years to come.

In a few weeks, I will be leaving EA physically.  But I will never leave emotionally.  I am so incredibly proud of all the great things you have done, and it has been my honor to lead this team these past six years.  After March, I will be cheering wildly for EA from the sidelines.

And here’s his resignation letter to Larry Probts:

I hereby offer my resignation as CEO of Electronic Arts effective with the end of our Fiscal Year 13 on March 30, 2013.

This is a tough decision, but it all comes down to accountability. The progress EA has made on transitioning to digital games and services is something I’m extremely proud of. However, it currently looks like we will come in at the low end of, or slightly below, the financial guidance we issued in January, and we have fallen short of the internal operating plan we set one year ago. EA’s shareholders and employees expect better and I am accountable for the miss.

I have been at the helm as EA’s CEO for six years and served as COO for nearly seven years starting in 1997. I know this company well, and I care deeply about its future success. I leave knowing EA is a great company, with an enormously talented group of leaders and the strongest slate of games in the industry. I could not be more proud of our company’s games, from Battlefield and FIFA, to The Simpsons: Tapped Out and Real Racing 3. We have built many great franchises that will serve the company well in FY14 and beyond. In particular, I am confident that the investments we have made in games for next-generation consoles will put EA in a strong leadership position for many years ahead.

In offering my resignation, my goal is to allow the talented leaders at EA a clean start on FY14. I look forward to working with you in the coming weeks on an effective leadership transition. I’m extremely honored to have led this company and proud to have worked with all the great people at Electronic Arts.