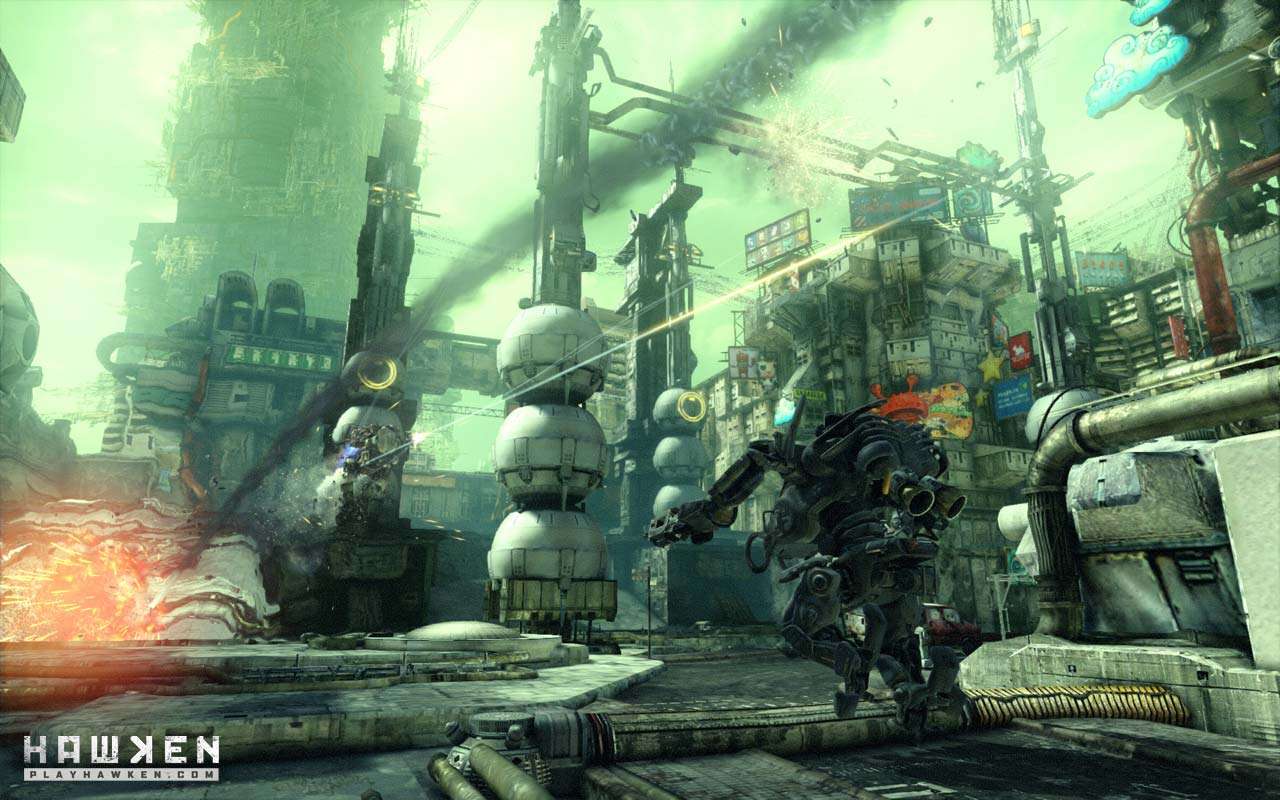 So at time of writing this, it should be known that we had access to the open beta version of Hawken. The final release of the game isn’t due for final release later this year. I’ll come back and update this review if the game changes significantly between now and release but the game is already pretty polished so i’m not sure it’s going to need it.

So when I talk about mechs and PC games, most people think about the classic game MechWarrior. Sure there’s twenty-foot-tall mechanical warriors and bullets galore but that’s pretty much where the comparisons stop. Hawken is all about quick movement and fast combat. The maps here are small and as my mech dash about the combat gets intense and almost poetic. 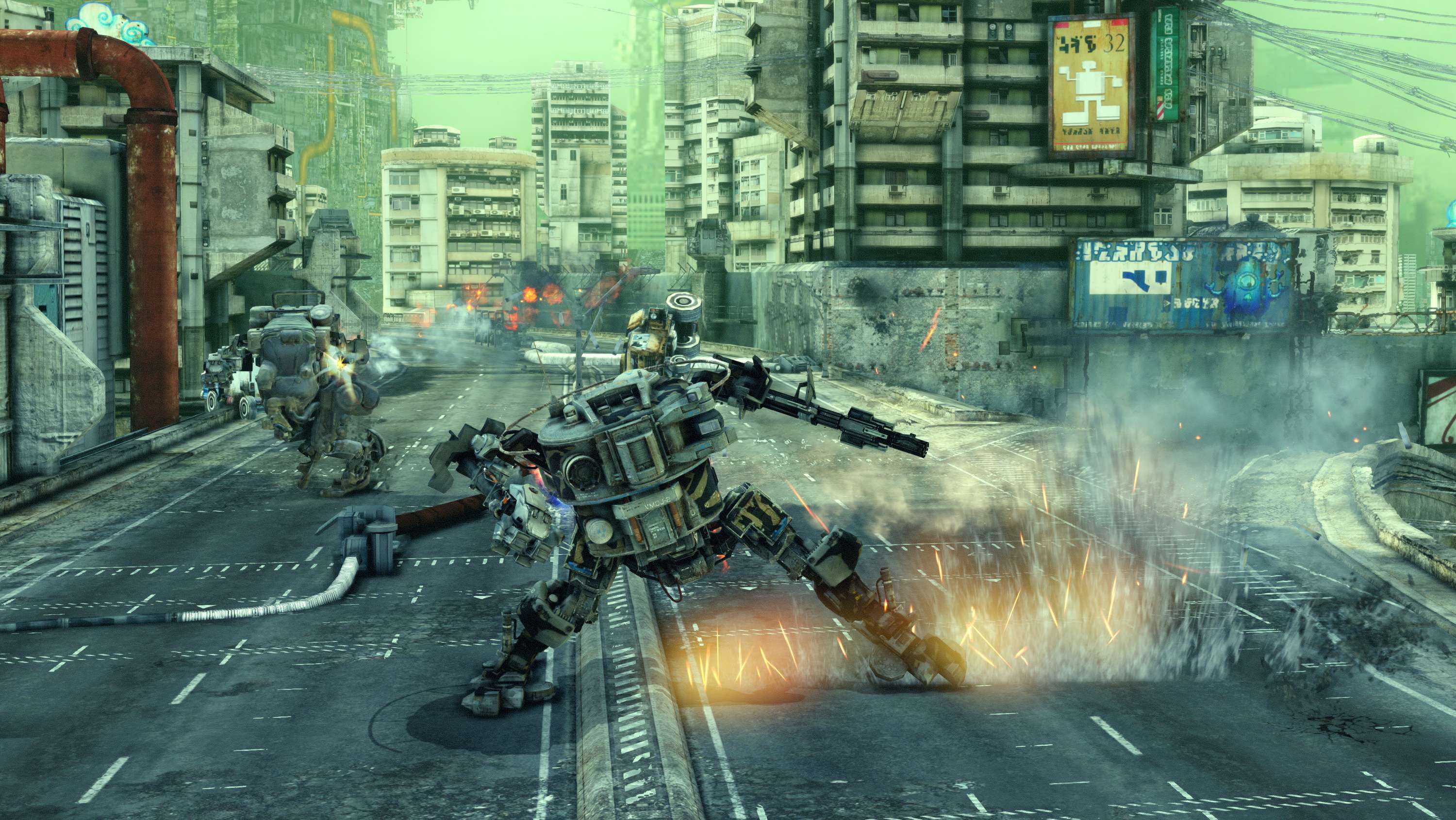 The dash ability I mentioned is one that gives Hawken an edge over some of it’s other FPS competitors. Pressing the dash button combination engages a back-mounted jet that propels you forward with huge speed. The dash ability is one of the best features in the game, but like all good things it’s limited by fuel but it does regenerate. Once you master some of the basic dashing, you can really get the ability to work for you. I still remember the first time I dodged an incoming missile at the very last second or the time I hovered over my enemy head and rained death down on him from above. Although I should mention at this point these moves takes practice.

So now in terms of the hardware there are nine different classes, each catering to your different style of play. Hawken also has a nice touch and gives you and each mech a different difficulty rating. At the lower levels there’s the Assault class, a lightweight armoured beast and all-rounder that combines a medium range rifle with a TOW rocket launcher. Next up is the Rocketeer who while more of a challenge, is a walking bomb when piloted correctly and comes with the additional option of transforming into a mobile turret. The Brawler class comes equipped with a nasty flak cannon that shreds your opponents armour at close range. The Sharpshooter class is your standard sniper, although at this point I couldn’t find a map that really showed of the snipers true abilities. Last and not least is your standard class the Scout, who can quickly recharge its fuel and be back in the battle in seconds. 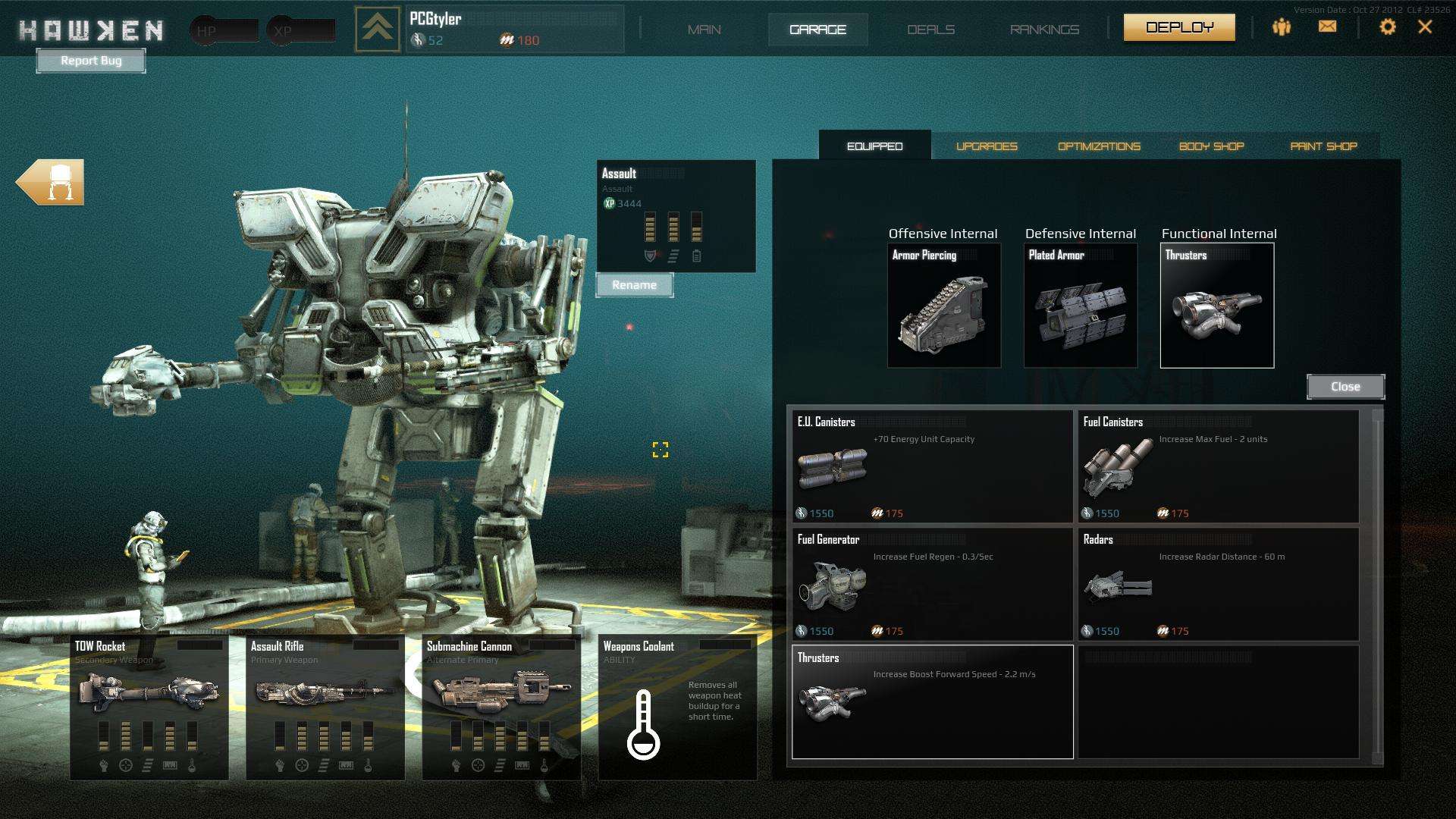 Hawken also rewards players who are consistent, when you stick with a class and really learn their strengths and weaknesses, you’ll earn points that you can use to advance through the upgrade skill trees. Their are 3 skill trees; Offence, Defence and Movement. Offence increases bullet damage, fire rate, and reduces weapon heat. Defence toughens up your armour and increases your dodge speed. Movement enables you to walk faster, makes you less visible to radar, and increases your fuel regeneration rate.

Similar to all other RPG’s you can customise your mech with new parts that give you stat boosts and weapons. Finally, the starting mechs look like they were pieced together from scrap metal, and designed for war, rather than to look pretty but if you don’t love the look of your Mech there are even cosmetic upgrades, which let you change the shape and colour of your mech. Each class, as you can imagine, comes some additional special abilities too. For example, The Assault class gives you the ability to instantly cool down your weapons when they overheat give you a nice edge in firefights. 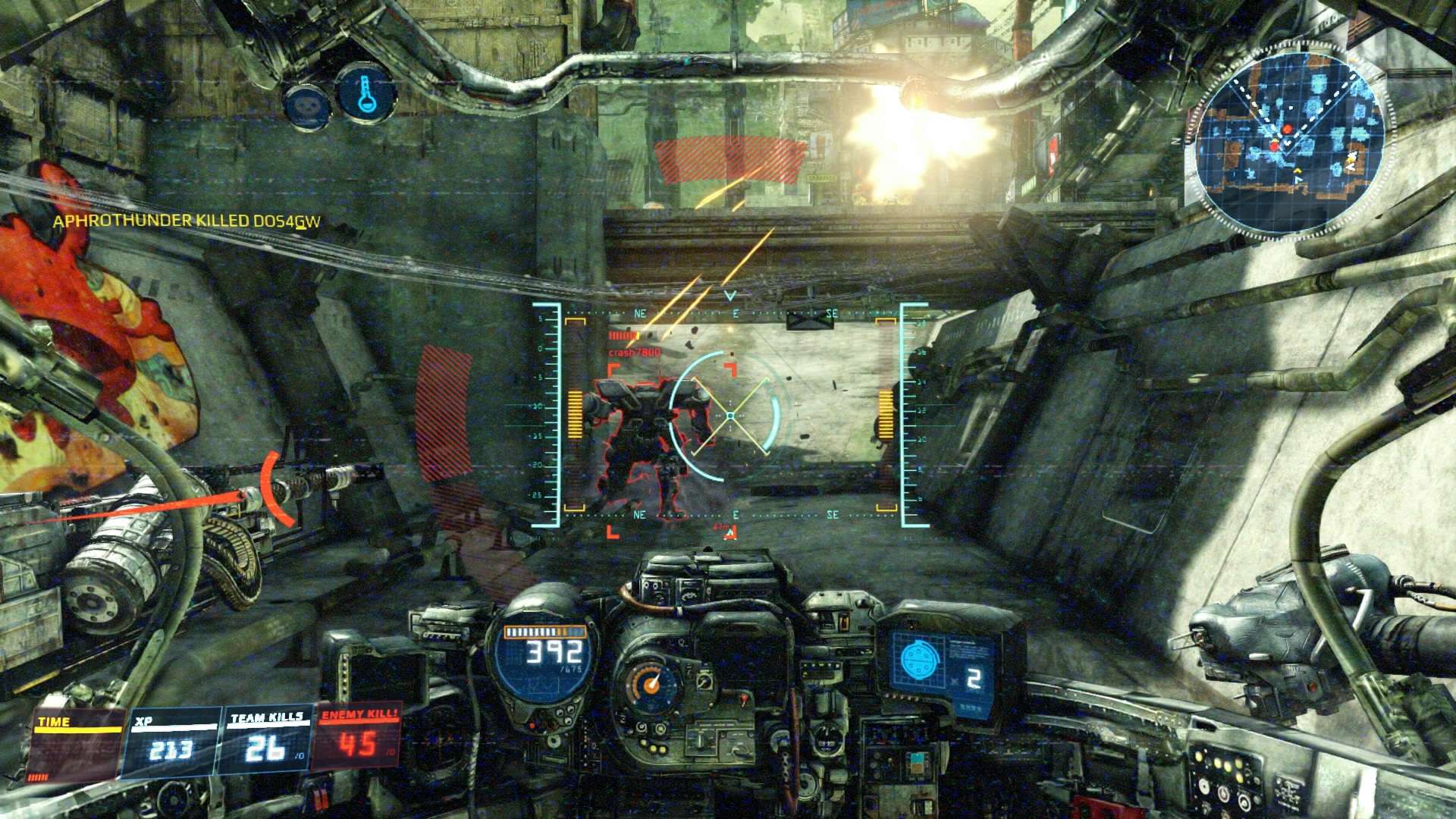 So when it comes to combat; the game brings you a real life experience of piloting a mech. When multiple players are shooting at each other in the same area, your vision becomes obscured by big ass explosions, fire, dust and smoke. One great recent addition is the ability to equip Mech Taunts, allowing you to stand over your dead opponents revel in their demise. Although melee attacks are very obvious in their absence and i hated not being able to feel steel fist versus steel fist combat, PC Gamer and Chris Lalli, Adhesive Games’ co-founder and lead animator, and he confirmed that the Hawken team was tentatively experimenting with the addition of close-quarters mech-mashing “in a controlled way. In all honesty, all these points add up to the true physical sensation of piloting a mech.

In terms of maps for the game, I played with a few like Bazaar, Uptown, Origin and Prosk. Each map offering a different style of environment and suit a style of play. of Origin is perhaps my favourite map, boasting brilliant vertical combat, with a series of stacked levels to fight on, and jump pads that spring your mech into the air. True it’s not a massive selection compared to most shooters, but they’re all visually and tactically great and Hawken will adding more over the coming months. 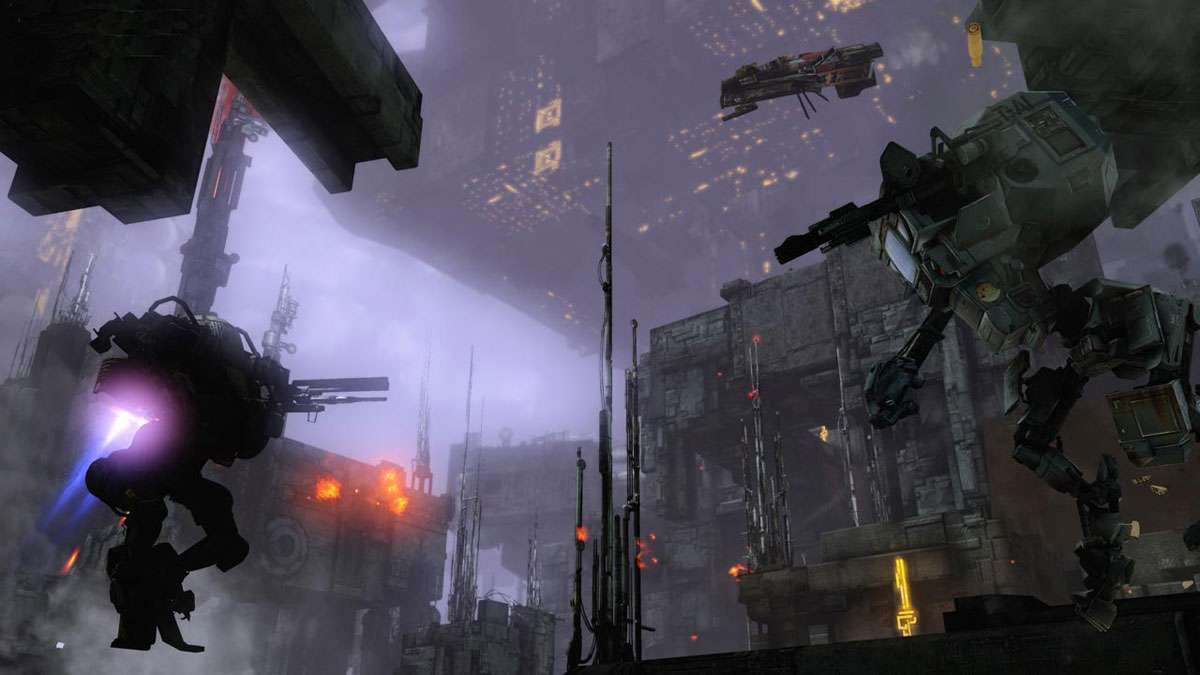 Being a multiplayer shooter the game modes take center place. The Deathmatch and Team Deathmatch modes are pretty standard and there isn’t much distinction between these modes and a off the shelf FPS. Next up is Missile Assault and Siege, which are a hell a lot more interesting. Missile Assault has two sides fighting to take control of three missile silos. When a silo is held, it continually launches rockets at the enemy base. The first team to destroy the other side’s base wins, that simple! Siege is the most difficult mode to get used to, but also in my opinion the best element. The premise is pretty simple, players have to gather energy from nodes in the centre of the map, then rush back to their base and dump it. When a certain amount is harvested, an enormous battleship is launched and heads towards the opposing team’s base. When this happens, the other team has to secure an AA gun to shoot it down. When you’re with a team who know what they’re doing, Siege is Hawken at its best, more tactical and measured than a standard FPS but with all of that genre’s innate reactivity.

The game looks beautiful on so many levels and the soft, natural lighting and a subtle grain filter add a layer of grit and realism that brings the ’60s/’70s sci-fi film environment to life. I feel it’s a shame, such a huge shame that the realistic and compelling universe that is Hawken is limited to a multiplayer shooter and I hope that it will be expanded to more genres/

Piloting Hawken’s mechs is a great way to spend a few hours and if you’re a fan of battling bots, Hawken is definitely worth checking out. Additionally it free so it’s not going to cost you a thing. Although some other people may complain about the Free to Play model, personally I didn’t see the standard issues here. All in all Hawken is a beautifully rendered and actioned packed shooter with some serious depth, if you have the time.

For more info on the game check out www.playhawken.com