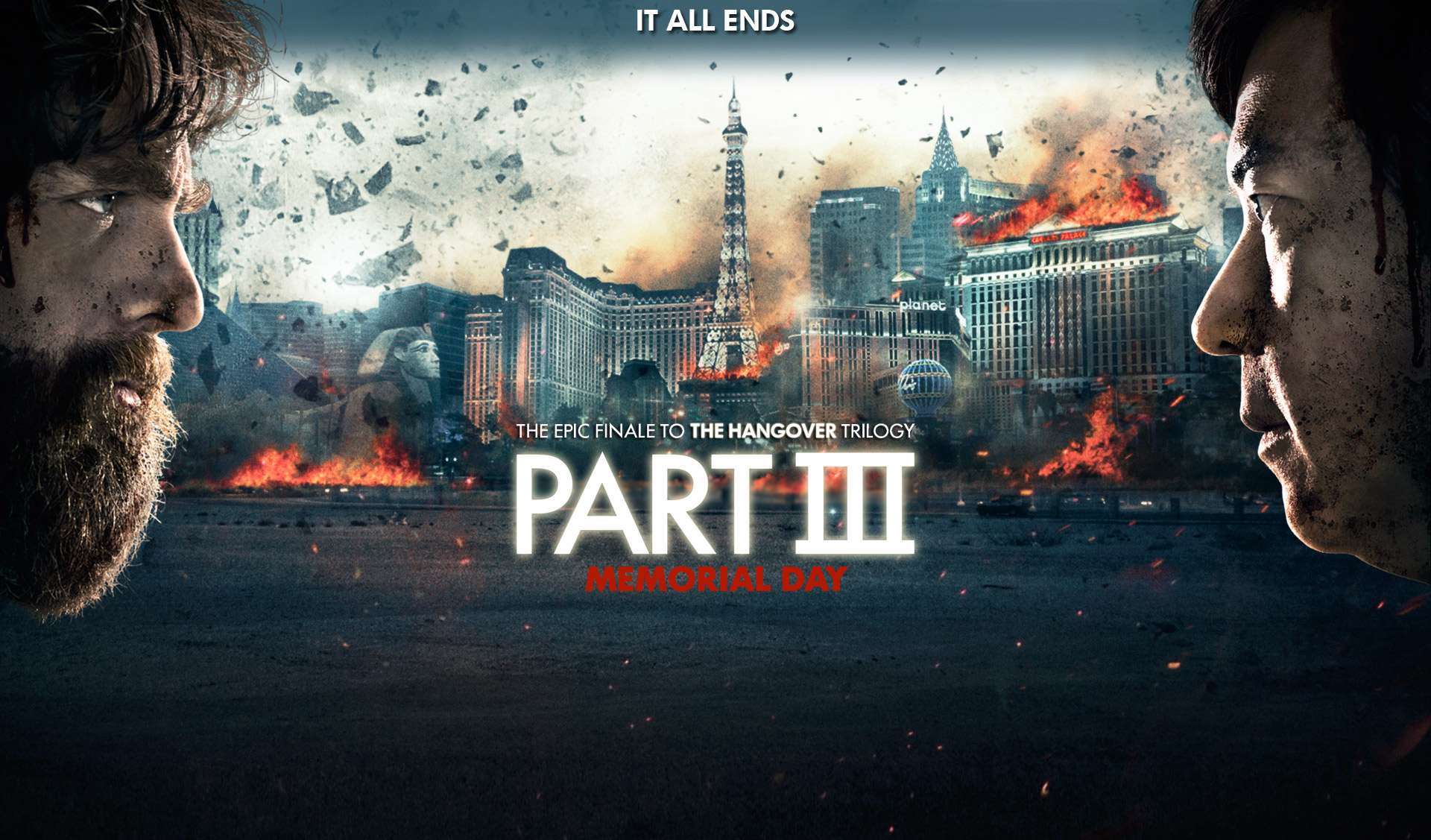 The Hangover Part III – The Review

About half an hour into The Hangover Part III Bradley Cooper’s character, Phil, exclaims “What the f**k am I watching?”

When The Hangover opened in 2009 it was generally well-received. And it was very funny. The premise was simple – four guys go to Las Vegas for a bachelor party. They wake up the following morning, after a VERY rough night, in a trashed hotel suite to find the groom is missing. They then have to piece together what happened, find the groom and get him to the church on time. It was a massive hit and put the members of “The Wolfpack” (Bradley Cooper, Ed Helms and Zach Galifianakis) firmly on the map.

It spawned an inevitable sequel in 2011 that was virtually a carbon copy of the first film, albeit set in a different location and slightly darker in tone. In fact, I have a theory about The Hangover Part II (which I have never attempted to prove but if you want to try, be my guest). I believe that if you were to play the first two films in sync with one another, they would almost exactly match up, moment for moment, gag for gag. However, despite the alarming similarities, audiences were clearly hungry for more and it went on to become the highest-grossing R-rated comedy of all time. So, a third (and by the looks of it, final) chapter was always on the cards. 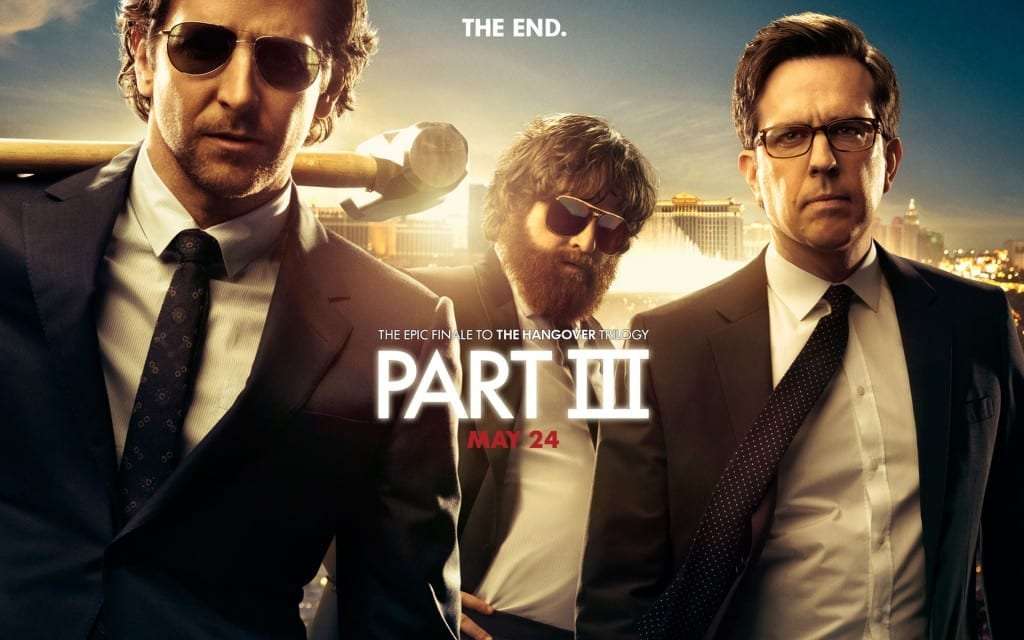 It all starts with a full-scale riot in a Bangkok prison during which the popular recurring character, Mr. Chow (Ken Jeong) escapes (this scene features a nice little nod to The Shawshank Redemption). We then cut to Alan (Galifianakis) driving on the freeway with his latest extravagant purchase in tow – a giraffe. After a rather tasteless accident involving a low bridge which triggers a multi-vehicle pile-up (you get the picture), Alan is back home, facing the wrath of his father (Jeffrey Tambor), who promptly suffers a fatal heart attack. 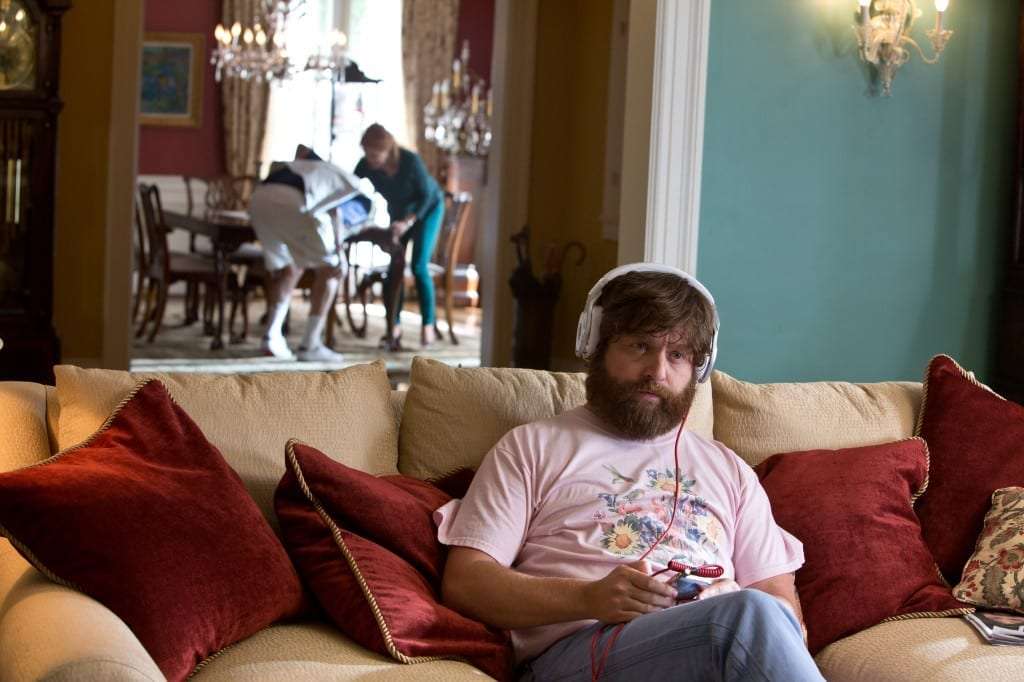 Alan (Zach Galifianakis) in a world of his own

In the wake of his father’s death, Alan’s friends become concerned about his increasingly erratic behaviour and decide to stage an intervention. They convince him to attend a hospital for treatment and The Wolfpack hits the road…again. But they are soon intercepted by a masked gang, led by a crime boss named Marshall (John Goodman, Hollywood’s busiest character actor) who informs them of Mr. Chow’s escape. He also tells them that Chow once stole millions of dollars worth of gold bars from him and he wants them back. Marshall takes Doug (Justin Bartha) hostage and the rest of the gang are given three days to find Chow and bring him in, or their friend will be killed. And that’s pretty much it as far as the plot is concerned.

On the road again

What follows plays more like a straightforward heist movie than a comedy. Their mission first leads them to Mexico and then ultimately to the original scene of the crime from the first movie – Las Vegas. But not even a return to Sin City can give this film the jolt it sorely needs.

It feels less like an ensemble piece this time around and the chemistry between the leads is sadly lacking. Bradley Cooper phones his performance in. He looks bored throughout and he is simply given very little to do. In fairness it’s not his fault – its more down to the poor script and shoddy plot. I can’t help but think that his involvement in this sequel was either down to loyalty or contractual obligation (or both). Since the first two films Cooper has gone on to much bigger and better things and this weak material seems beneath him now.  The same can be said for Ed Helms. And poor Justin Bartha once again is absent for the bulk of the film (he really needs to have a talk with his agent).

As for Mr. Chow, he was a funny, manic, unpredictable character who popped up occasionally in the first two films and stole every scene he was in. But this time around he is one of the central characters and frankly he outstays his welcome incredibly quickly. But ultimately, this is Galifianakis’ film. In an attempt to give his character an arc, he is brought to the fore while the rest of The Wolfpack just stand around in the background. He was great in the first two movies as the comic relief but as the main character he simply can’t hold the film together.

The characters of Chow and Alan were fine in small doses but when they are given this much screen time it just feels like overkill. They cease to be funny and instead become incredibly annoying and, worst of all, unfunny.

There are a couple of familiar (but ultimately unnecessary) cameos. Heather Graham pops up again as the retired stripper, Jade, as does Mike Epps as Black Doug. And Melissa McCarthy (Bridesmaids) is wasted as Alan’s love interest. But there is no Mike Tyson this time around.

This film is also much darker in tone than its predecessors, as the trailer suggests. And there are several scenes of animal cruelty that are supposed to be played for laughs but leave quite a bad taste in the mouth.

One of the main criticisms of the second film was that it stuck too closely to the plot of the first. Ironically, the fact that this film deviates so far from that structure is its main weakness. At least the first two were funny and had some genuine laugh-out-loud moments. This doesn’t. There are a few small chuckles along the way but the vast majority of the attempts at humour just fall completely flat. It also plays it remarkably safe. The stakes were raised in the second film and the hijinks were even more outrageous than in the first. In this one the characters are not put through the ringer at all. They just clumsily stumble from one location to the next without any major incidents or accidents befalling any of them. 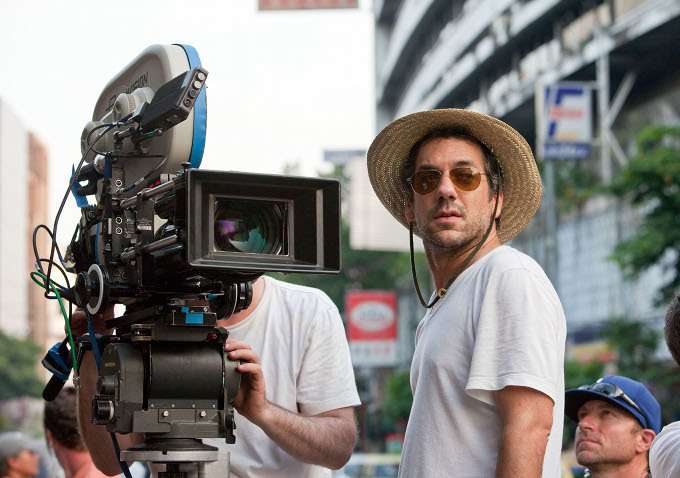 Director Todd Phillips seems to have lost the ability to harness the chemistry that exists between the cast and the film just limps along to its lame conclusion. And it’s a shame as there is clearly still great potential there, as evidenced by the utterly ridiculous (and very funny) scene which pops up during the end credits. Make sure you stay for this as it’s arguably the funniest part of the whole film and offers a glimpse of what could have been. 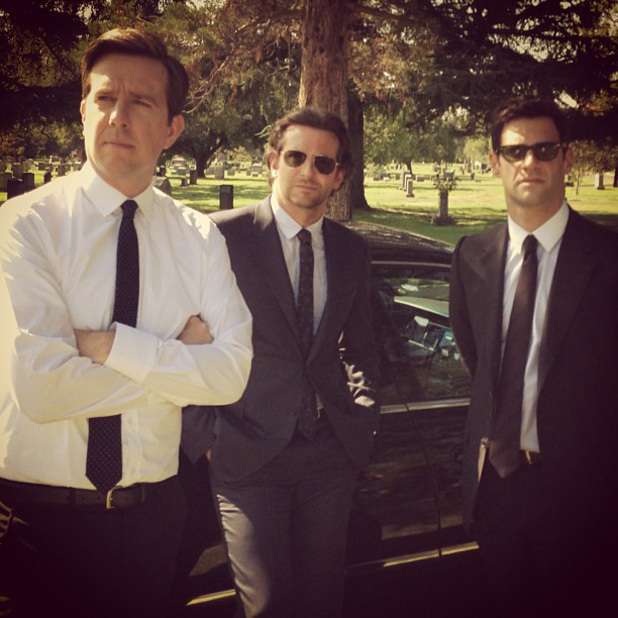 Helms, Cooper and Bartha do a lot of standing around this time

Ultimately it feels as if this is definitely the end of the road for The Wolfpack. Todd Phillips himself has said that this will be the last entry in the franchise. And based on the evidence I don’t think any of the cast would want to come back for another installment either. And it’s probably just as well. I don’t think I could face another Hangover like this…

The Hangover Part III opens in Ireland on the 24th of May.