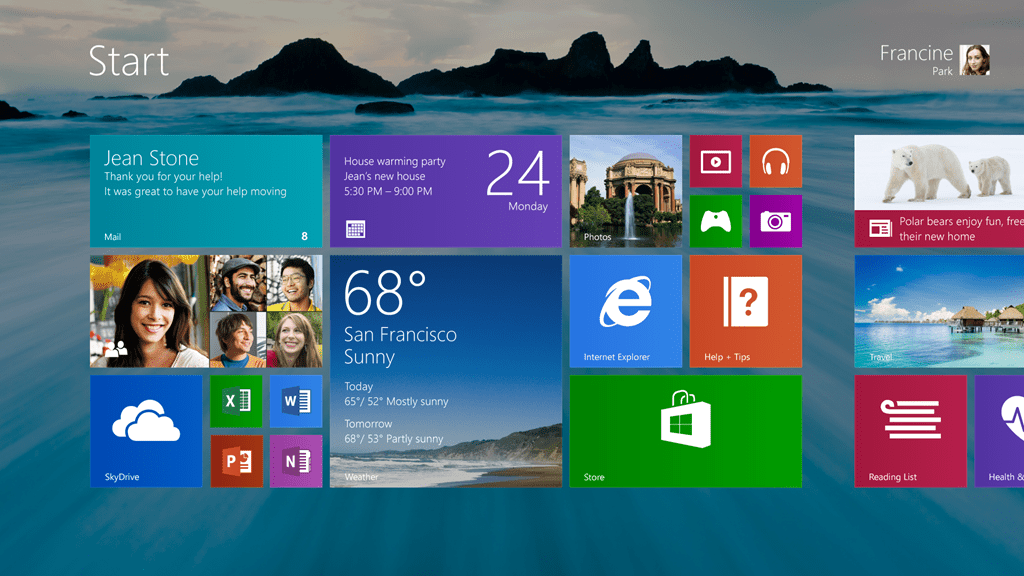 Windows 8.1 Preview – Many Small Changes Can Make a Big Difference

Windows 8 was a massive re-imagining of the most popular computer operating system in the world, and naturally a lot of people were unhappy with the vast changes that were made.

Most people don’t like change, they like to know where everything is and how to use it, notions which were turned on their heads with Windows 8.
The Metro Start Screen (Now called Modern Design, but we prefer Metro) confused many users and generated a lot of hate for the new OS.

Windows 8 is better despite all of the criticisms, it’s faster and more secure than Windows 7 and has slowly brought touchscreens to almost every device, and a range of new devices called hybrids – laptops/tablets, a range which was just a blip on the radar this time last year.

Thankfully Microsoft have listened to the complaints and combined them with data that it collects from select Windows 8 users to improve the OS – what can users expect from the free update to Windows 8.1?

Many cues have been taken from Windows Phone 8 here, a dynamic lock screen that cycles through your chosen photos and the ability to launch the camera straight from the lock screen are very phone-like features, while the new Start Screen allows new smaller and larger live tiles.
New backgrounds including some animated ones are there, along with the ability to set your Desktop background as the Start Screen background also, to help add familiarity.

New apps that are installed now won’t automatically be pinned to the Start Screen either, instead they’ll be listed under ‘All Apps’ (which now has filters to arranges apps by) so you can pin it later if you want to.

In Windows 8 you can ‘snap’ apps to one side of the screen which can be handy for things like twitter, search results or music but the snapped app is so narrow that it’s not practical for the majority of Windows apps.
In Windows 8.1, you can snap up to four apps on the one screen, depending on your screen size and resolution – the lowest common denominator for number of apps that can be snapped is two on lower end displays. 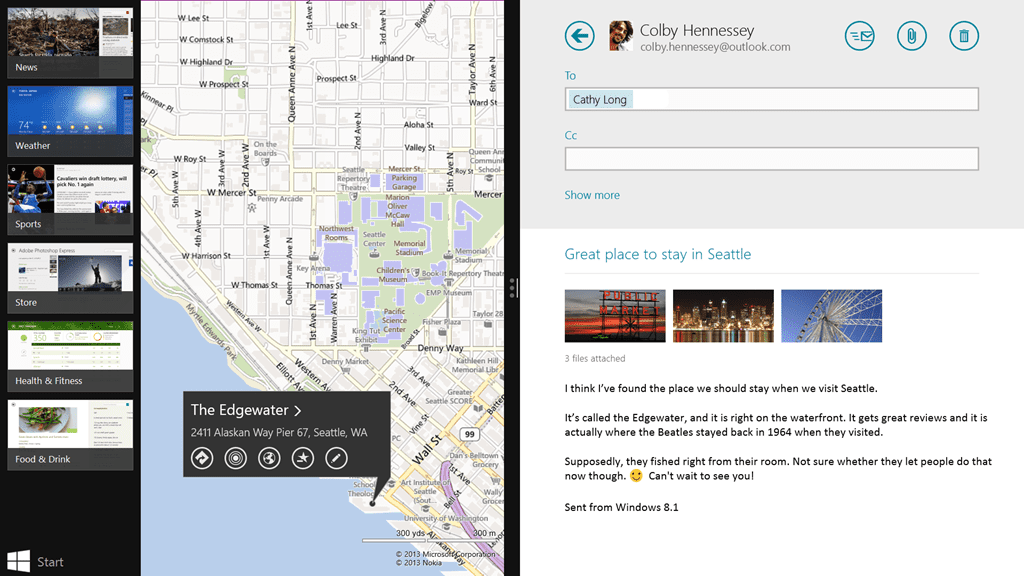 Apps will automatically open in snapped view too, if you open a photo attachment from Mail for example, the photo will open in 60/50 ratio, giving you more room to view the image, while a web link will open Internet Explorer in a 50/50 ratio.
Apps can also snap twice on the one display, such as two tabs from Internet Explorer.

Updates for apps in the Windows Store will now download automatically in the background as they’re released.

Search, Syncing and the Return of the Start Button

According to Microsoft, Search is the most-used Charm in Windows 8 at the moment with more than 90% of users actually using it.

With that in mind, Bing will integrate heavily into Search in 8.1, providing a unified search across all your apps, files and the web whenever you search for something.
Results will be presented in a ‘Search Hero’, compiling information from multiple sources both online and off. If the result that you click is from Wikipedia, Windows 8.1 will launch the Wikipedia app instead of the webpage itself.

For those who prefer Google however, it’s bad news as Microsoft state that they won’t allow other search engines to power the Charms search.

The Start Screen will sync across all Windows 8.1 devices, much like it does already but right down to the layout of the tiles with the intention of making whatever device that you sign into as familiar as possible right off the bat and all your files sync with SkyDrive too.

The Start Button is making its way back to Windows in the update, which was arguably one of the biggest complaints from those who didn’t like Windows 8.
The new Start Button will by default bring users back to their Start Screen, exactly as the current ‘Start Tip’ does now, but it can be changed to open up an ‘All Apps’ menu instead. 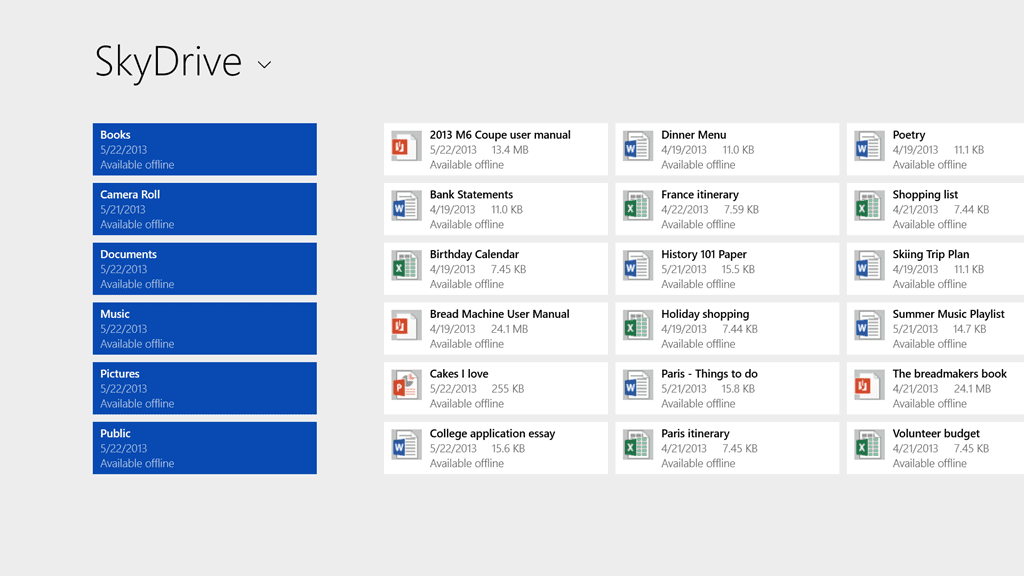 It’s also possible to boot up straight into the old and familiar Desktop mode for those who want to avoid as much Metro as possible.
Companies can also force a device to boot into a specific app if needs be.

The newest version of IE will be bundled with 8.1, bringing a few subtle but welcome changes.
Tabs will now be at the bottom of the screen instead of the top and will allow unlimited tabs, along with sub folders for favourites and the ability to create RSS Live Tiles for your Start Screen.

Internet Explorer 11 will sync tabs across Windows Phone 8 and Windows 8.1, similarly to how Google Chrome works at the moment. This is an extremely sought-after feature for Windows Phone 8 users.
It’s worth noting that Microsoft state that for tab syncing, users will require a “future version of Windows Phone” – Windows Phone 8.1 perhaps?

Considering that Windows 8 was made with both desktop PCs and tablet devices in mind, it’s surprising that there were simple apps missing that most people would expect in a tablet – An Alarm or Calculator app for example? Both of which are coming with 8.1

Updates for current core apps are en route too, the Photo app will have options to edit, crop and enhance photos without the need for a separate app and the Xbox Music app is said to be much faster and easier to use.

Other new app additions in 8.1 are Health and Fitness which provides workout plans and tracks calories and Food & Drink which contains recipes and shopping lists, while also letting users move between recipes by waving their hands in front of a web-cam – for when cooking gets messy.

A new Reading List will be ingrained into the Charms bar in 8.1, allowing users to store articles or bookmarks for later, which will also sync with Windows Phone 8. 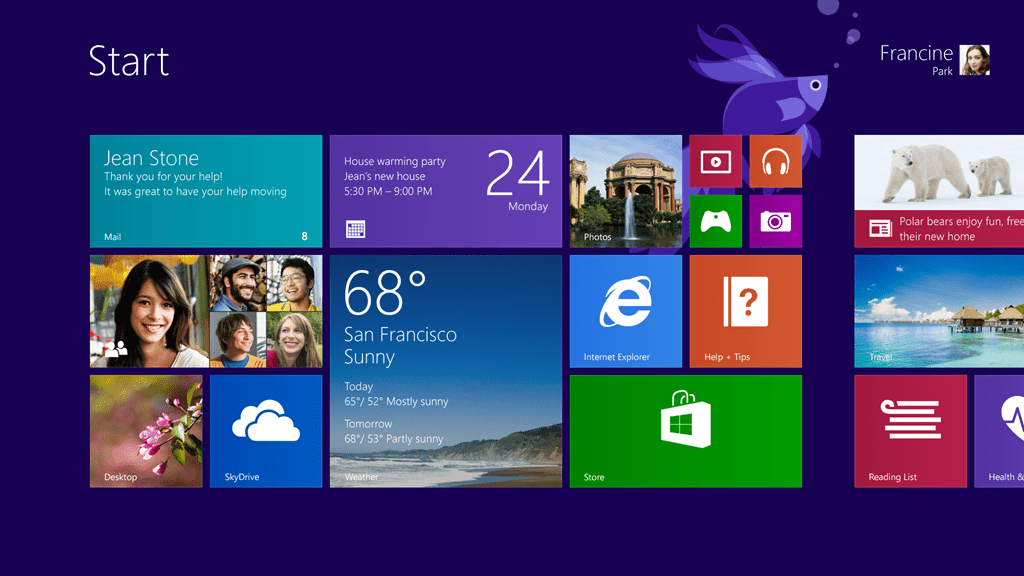 Microsoft made a huge gamble with Windows 8, upsetting a lot of consumers who had to re-learn how to use their PC. Most of those users would have been using the traditional desktop for their entire lives (myself included) and knew no different.

It was only natural that people would be unhappy, but Microsoft has listened to the complaints and comments and have made substantial changes to please its customers.

Windows 8.1 isn’t so much an upgrade from Windows 8, but more a series of essential changes that arguably should have been done before Windows 8 hit shop shelves.
PC sales are on the decline while tablet sales are shooting through the roof, this update combined with the rumoured 7-8 inch Windows 8 devices could level the playing field in Microsoft’s favour.

Microsoft haven’t confirmed a release date for 8.1 just yet, but a public Preview version will be launched on June 26th at their BUILD Developer Conference, so it’s likely that we’ll see the finished version a few months later.

The best news about Windows 8.1 is that it’s free for all Windows 8 users, even the most whiny user can’t complain about that…. right?