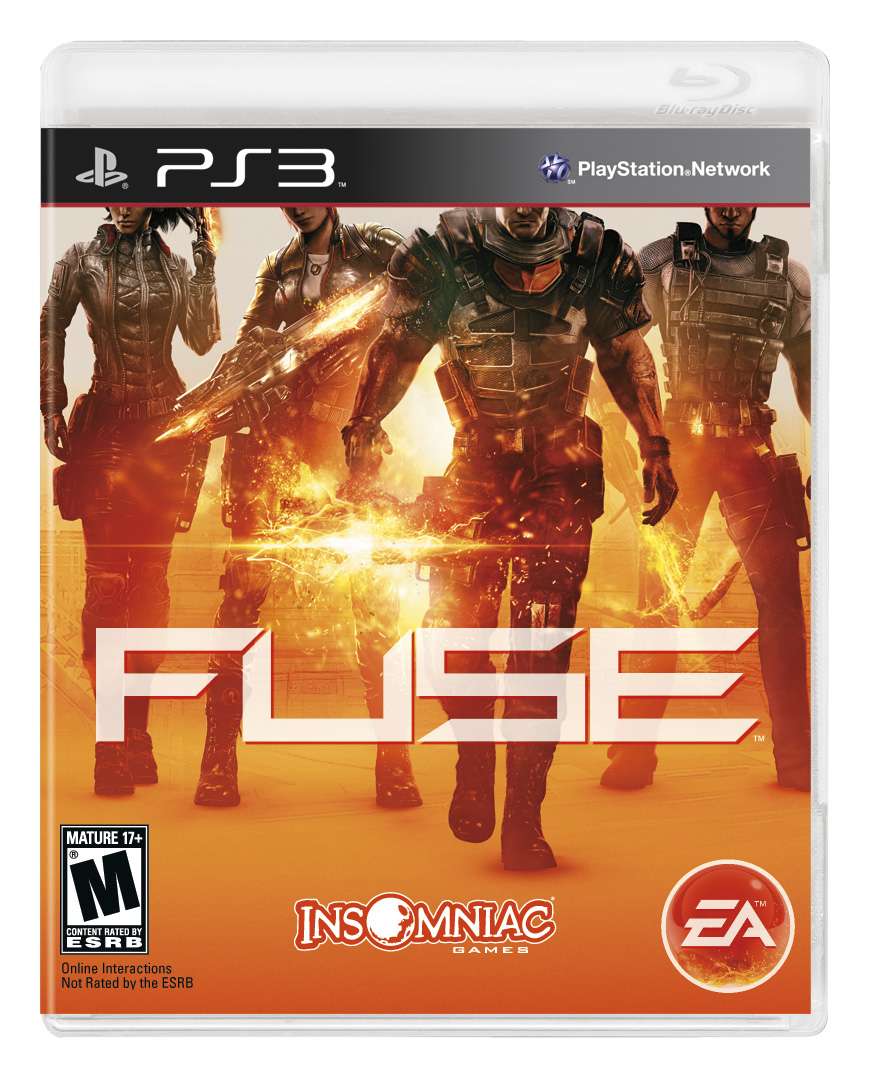 FUSE is the latest offering from the often impressive Insomniac games. Previous efforts from them, especially the Ratchet & Clank series have offered players relentless amounts of humour and fun. Have they managed to do something special again with FUSE?  TheEffect.net review takes a peek in our FUSE: Review.

Box art for both PS3 and Xbox 360 versions of FUSE

The premise of FUSE is quite simple: A non-government strike team, comprised of four members, infiltrates a secret facility to prevent a theft.  They fail, and subsequently find themselves in various locations trying to track down the enemy and the stolen goods.  The stolen goods in this case is an element giving its name to the game, FUSE.  An extraordinarily powerful fuel for all kinds of weapons and goodies, it serves as the driving force behind the plot, the power for the teams special weapons, and the weak spot on the boss enemies.

The story really is that simple.  It’s an incredibly linear game which treads over well worn ground in terms of both story and gameplay.  Every mission is basically entering a room, firing almost every round you have at wave upon wave of enemy, collecting ammo, and then moving onto the next room to rinse and repeat.  There are some breaks in this though.  The first is in the climbing sections, where occasionally there’ll be a really simple up or down climb to shuffle and jump through.  The second is with the stealth attacks, which aren’t really stealth attacks at all.  A stealth attack would generally involve sneakily killing one or two enemies and then raining ammo at a room full of people trying to kill you.

Except if you play co-op.  This is a game built to be played with friends, where strategy and progression through the missions can be coordinated via constant talking and a shared experience.  It’s so much better as a co-op game that you may be forgiven for thinking that Insomniac Games simply didn’t want people to ever play FUSE alone.  Battles become more manageable, reviving team mates can be managed much more swiftly, and XP can be racked up that little bit faster.  It’s not an entirely different experience, but it is more pleasurable.  Add that to the Echelon mode (waves of increasingly difficult enemies, with better XP rewards and no story to interrupt things) and the game improves vastly.

A promising variation on previous third person shooters was with the inclusion of special weapons.  Each of the team mates has a special, Fuse powered weapon, adding a new dynamic of strategy and XP building to the game . When they’re used together the XP rewards are increased and some nice animations ensue.  Unfortunately it’s just not enough. While the weapons are impressive (a portable shield, an explosive sniping crossbow, a black hole generator, and an enemy crystallising gun), they’re still somewhat lacking, and often nigh on impossible to actually be used together.  The upgrades available for them are nice, but too few, and too limited.

The characters themselves trade jibes, jokes and concern throughout the game, much as would be expected from a well built team.  This is a nice touch, but it doesn’t occur often enough, and the feeling that this is a long lived and close team, with a history, never really develops.  As such the feeling of engagement and interest in the characters never really pops out either.  Like the game as a whole the characters lack a certain charm that’s key to making the player care about what happens to them.

Similarly their skill trees aren’t very engaging. There are essentially two types of upgrade available to the player.  The unique upgrades are centred around the special weapon on each character, whereas the other upgrades are similar (or indeed the same) across the board.  It would be great to send the four characters in wildly different skill and class directions, but it’s simply not possible.  And so the player finds themselves on a linear upgrade path too.

There are a couple of areas where FUSE really makes it an uphill struggle for the player.  Firstly the menu is a nightmare, in particular with regard to upgrading a characters skills.  This is a long and tedious process that totally interrupts gameplay when upgrading all four characters.  Secondly, the difficulty curve for the enemies appears punishing.  The player will often find themselves overrun with enemies, some of which are incredibly difficult to dispatch, leading to reasonably consistent experience of ‘panic firing’, and a near endless cycle of waiting on revival.

– Easy to get to grips with.

– Solid, though not exceptional, look to the game.

– The allusion to stealth sections.

– Non-special weapons being almost all the same, and almost all useless.

– The game lost the charm of its original trailer, Overstrike 9

Is it worth playing?

Despite all that, yes, FUSE is worth playing.  It has it’s fun moments, especially when played cooperatively.  Hammering a large mech enemy into oblivion feels rewarding, and the combination of crossbow with shatter gun, or crossbow with black hole gun is devastating and fun to watch.