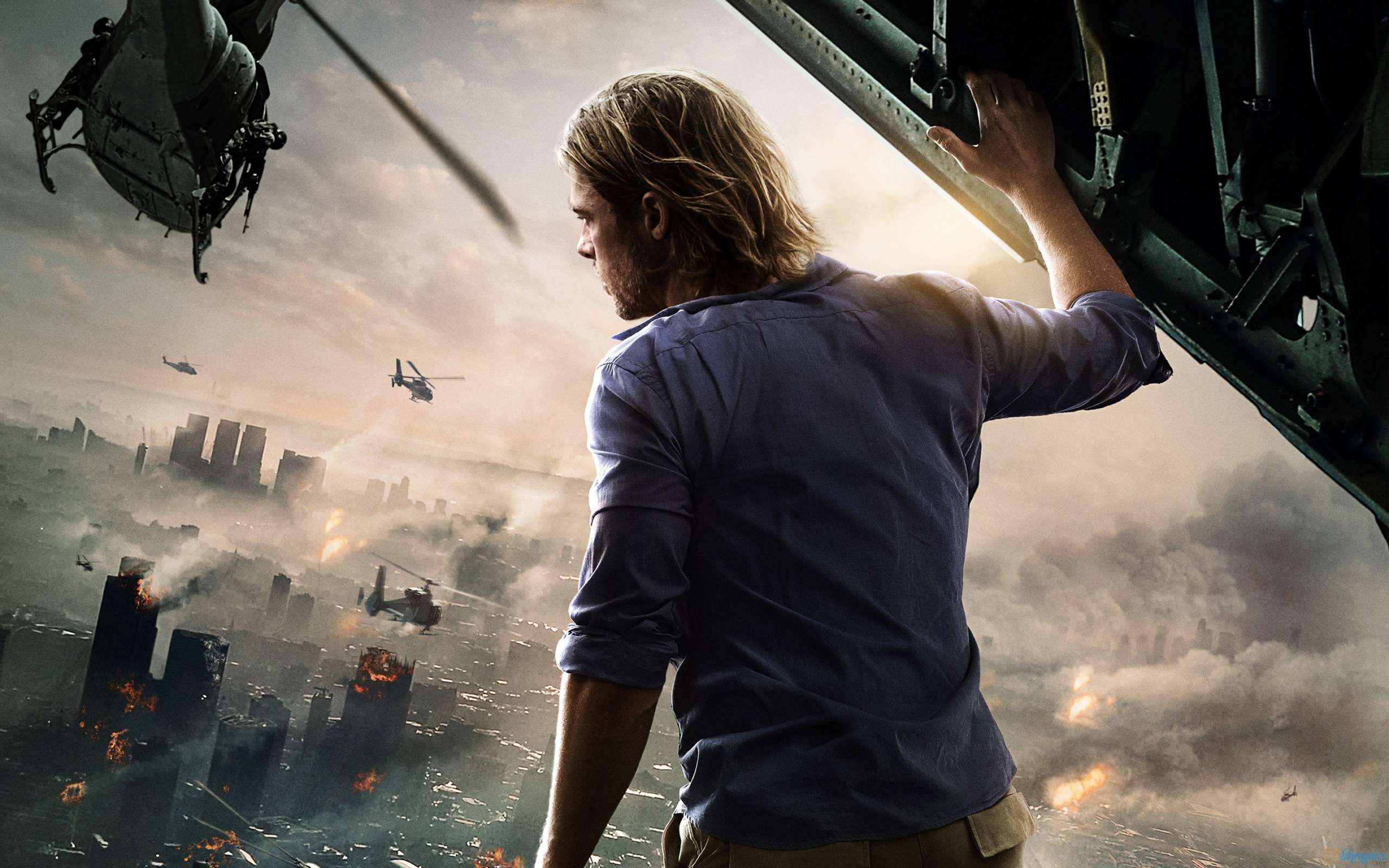 World War Z is VERY loosely based on Max (son of Mel) Brook’s excellent 2006 apocalyptic horror novel of the same name. Brad Pitt’s company, Plan B Entertainment, acquired the rights to the book a few years ago but the film has had, if rumour is to be believed, quite a torturous journey to the multiplexes.

The film tells the story of Gerry Lane (Pitt), an ex-UN employee who has retired to spend more time with his family. But when a worldwide zombie pandemic threatens mankind, he is forced to spring into action. He sets off on a globetrotting adventure to such far-flung destinations as Korea, India, Israel and, erm, Wales, in a effort to discover the source of the outbreak and find perhaps even find a cure. And, that’s it really. 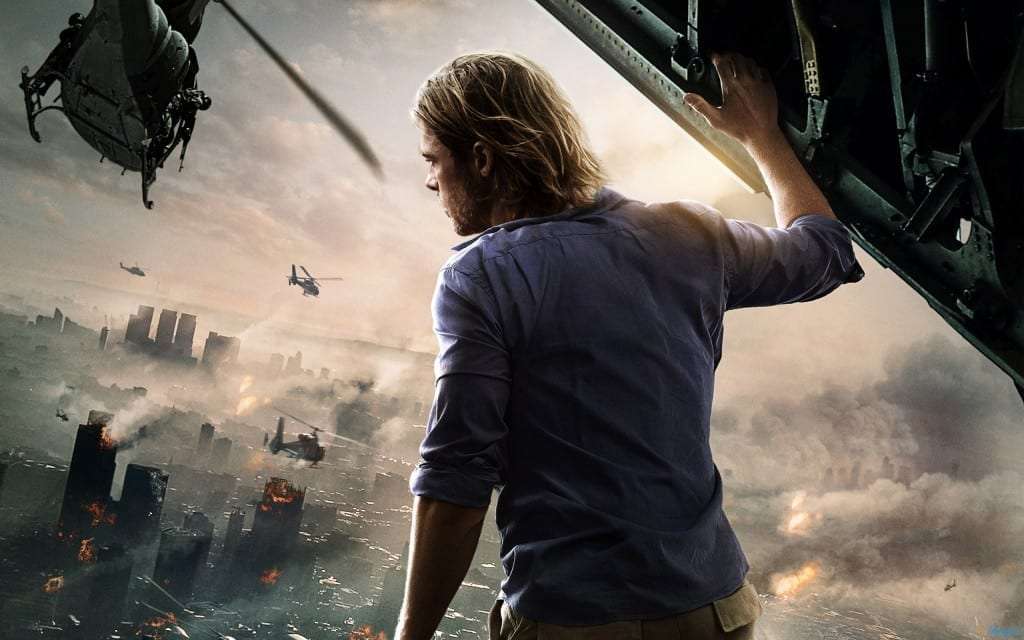 World War Z is a film that arrives with the dreaded “troubled production” label. There has been a huge amount of negative hype surrounding its long journey to the screen – a ballooning budget, massive rewrites, extensive reshoots, and reports of a very strained relationship between Pitt and the director, Marc Forster (who also made the awful Quantum of Solace). However, the trailers DID look promising. And early word suggested that maybe the film wasn’t quite as bad as many had feared.

So, finally, World War Z is here. Is it any good? 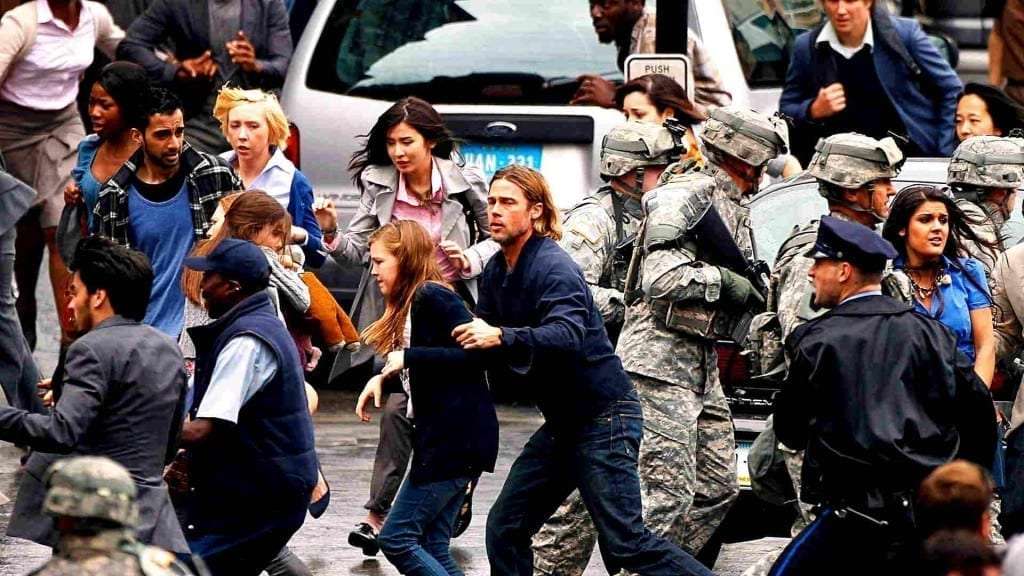 Gerry Lane (Brad Pitt) and his family scramble to safety

The film starts off quite well and it wastes virtually no time in getting straight into the action with a zombie outbreak in downtown Philadelphia (these scenes were shot in Glasgow, believe it or not). Lane, his wife (Mireille Enos) and his two daughters get caught up in the middle of the widespread panic and looting but manage to escape to safety. Once his family are safely on board an aircraft carrier (because he’s THAT important) Lane reluctantly agrees to take on a mission to get to the bottom of the outbreak, not only for the sake of his family, but for all mankind. He and his wife are both given satellite phones so they can stay in touch and he sets off on his quest. And this is where things start to fall apart. Pitt’s character simply jets from one place to another, finding vital clues, getting caught up in zombie attacks, managing to escape by the skin of his teeth and then heading on to the next destination where the action just repeats itself.

Director Marc Forster is unable to instill any sense of dread, tension or urgency into proceedings. The film just plods along from one poorly shot, badly edited, completely unengaging set piece to another. The CGI hordes of digital zombies are both unconvincing and unthreatening and if you’ve seen the trailer then you’ve seen virtually all the money shots. 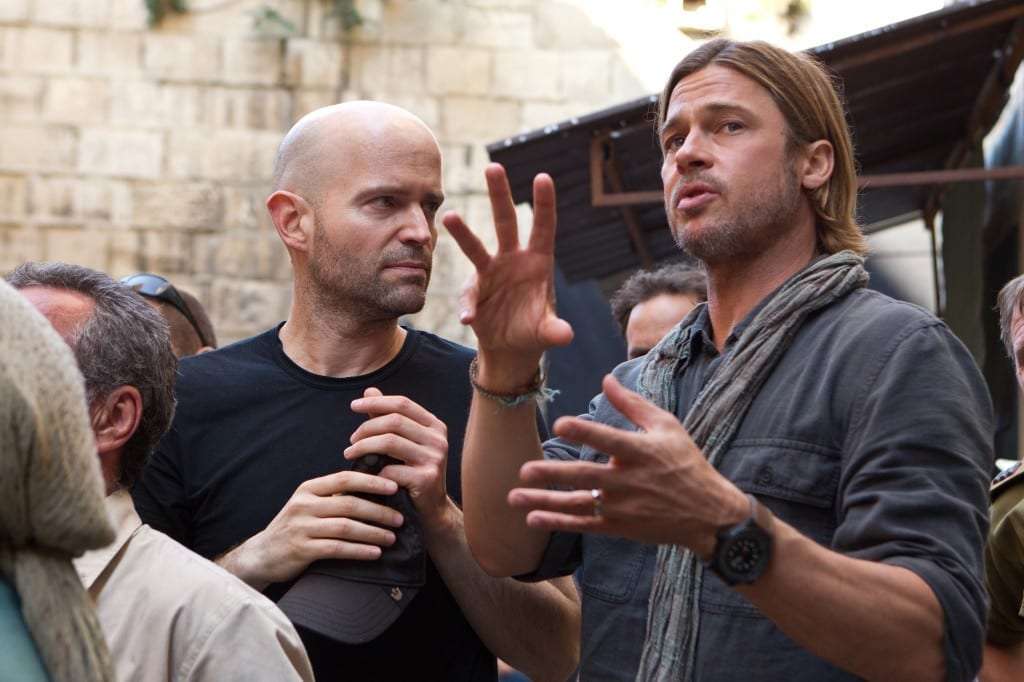 The film has the rotten stench of studio interference all over it. It appears that a decision was made somewhere along the line to tone down the blood and gore in an effort to achieve a lower age rating so it could appeal to as wide an audience as possible and increase its chance of recouping its considerable costs. And this hurts the film greatly. I’m not a gore hound by any means but this film, about a worldwide zombie epidemic, contains barely a single drop of blood. And as a result all sense of danger is removed. The film feels completely sanitized and it cheapens the whole affair. The zombies can run – fast. They twitch and convulse and moan a lot. But they’re just not scary. We’ve seen this kind of thing done too many times before, except bigger, better and scarier.

And then, about two-thirds of the way in to the film, you can almost tell the exact moment where the extensive reshoots kick in and it suddenly feels like a completely different film. But it doesn’t get any better, unfortunately. And it ultimately builds to a thoroughly unsatisfying, saccharine ending which leaves things open for another installment, which I very much doubt we’ll ever get. 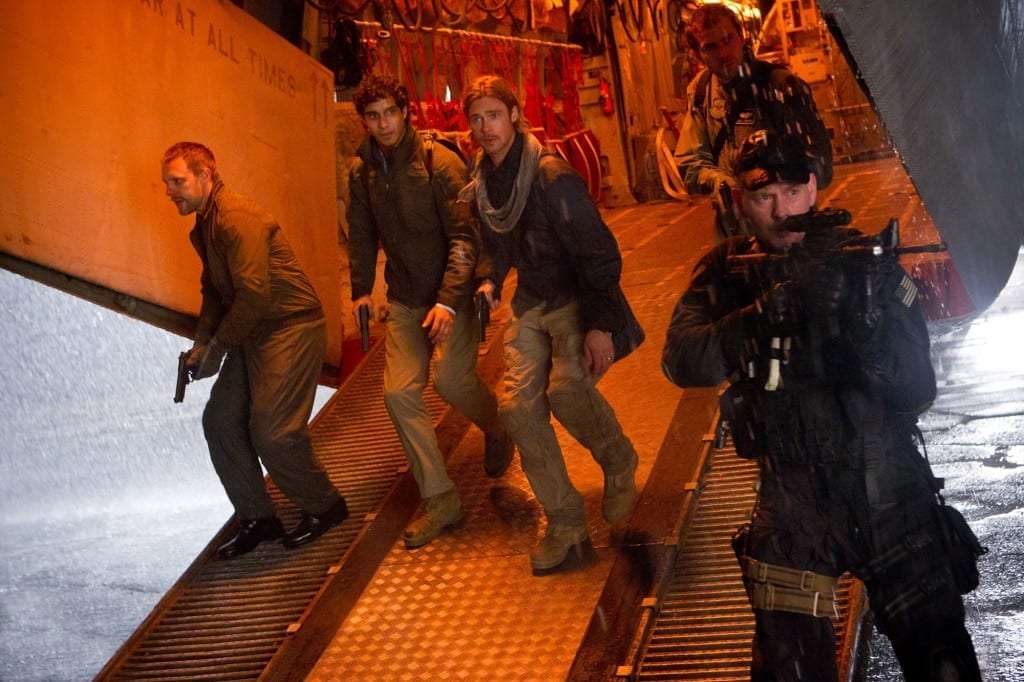 All the characters are one-dimensional and uninteresting. Great actors like David Morse (The Green Mile) and Peter Capaldi (The Thick of It) are wasted in nothing roles. I even thought I spotted Matthew Fox (Lost) as a soldier at one point and had to check the IMDB to confirm it was actually him. The dialogue is forced and riddled with clichés. Many of the characters also make very silly choices at critical moments. In fact, there is one incredibly stupid moment involving an airplane and a grenade that I won’t spoil here but it has to be seen to be believed.

Looking like he has stepped straight out of one of his Chanel No.5 adverts, even Pitt fails to convince. He just looks bored throughout and it’s very hard to care about the fate of his character or his family. 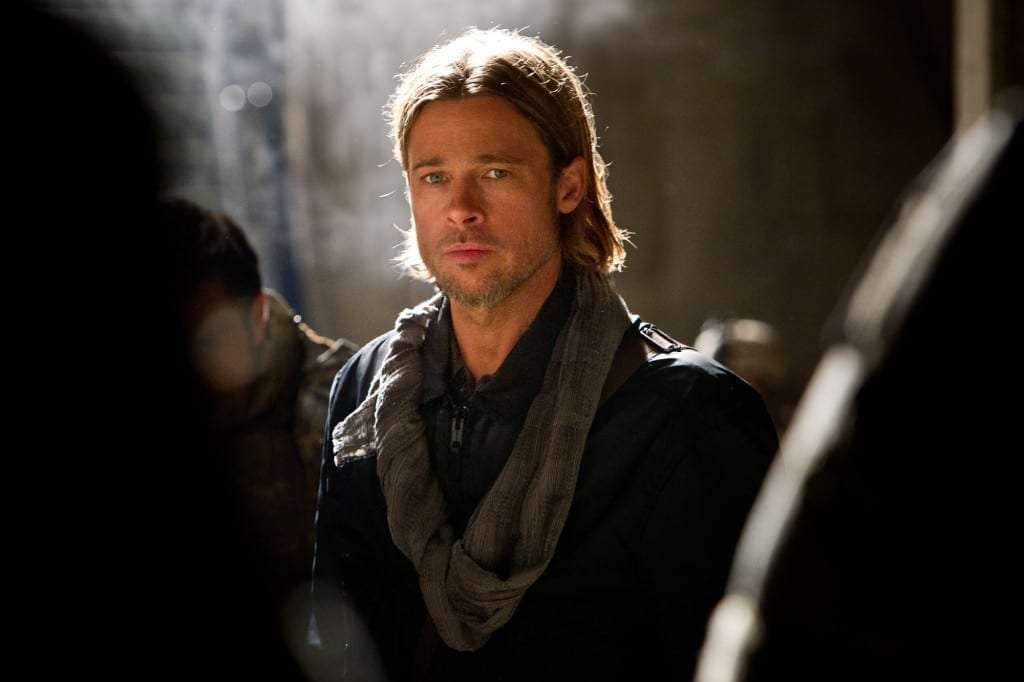 One can’t help but feel that there is a much better film in here trying to get out. It’s very telling that Pitt has chosen to do virtually no press or publicity for this movie, bar the odd soundbite at a red carpet premiere. That doesn’t exactly inspire confidence, especially considering he helped to develop and produce the film as well as star in it.

Sorry Brad, but this is the Pitts. Avoid like the plague. 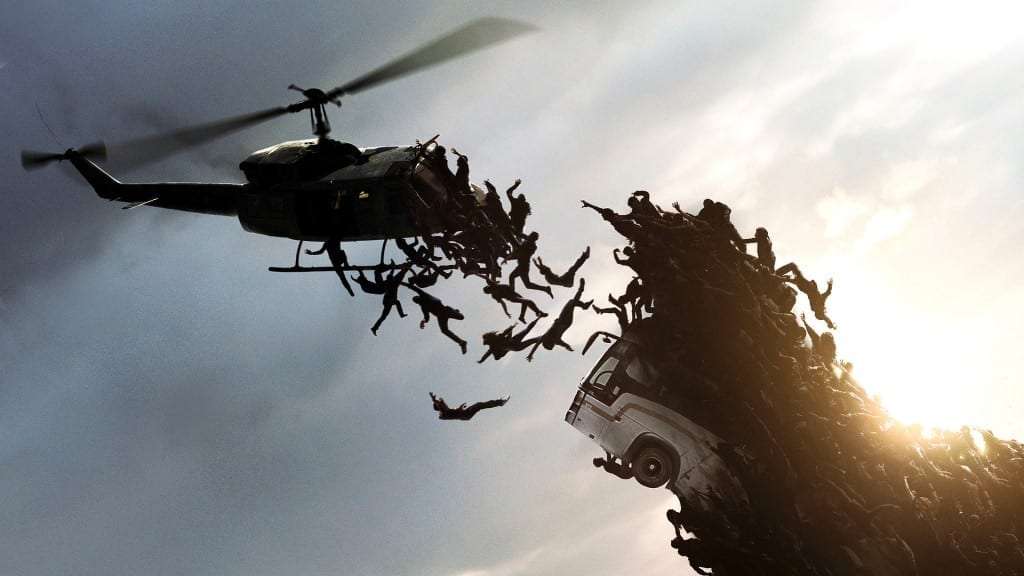 Exciting shots like this are few and far between

World War Z opens in Ireland on the 21st of June.