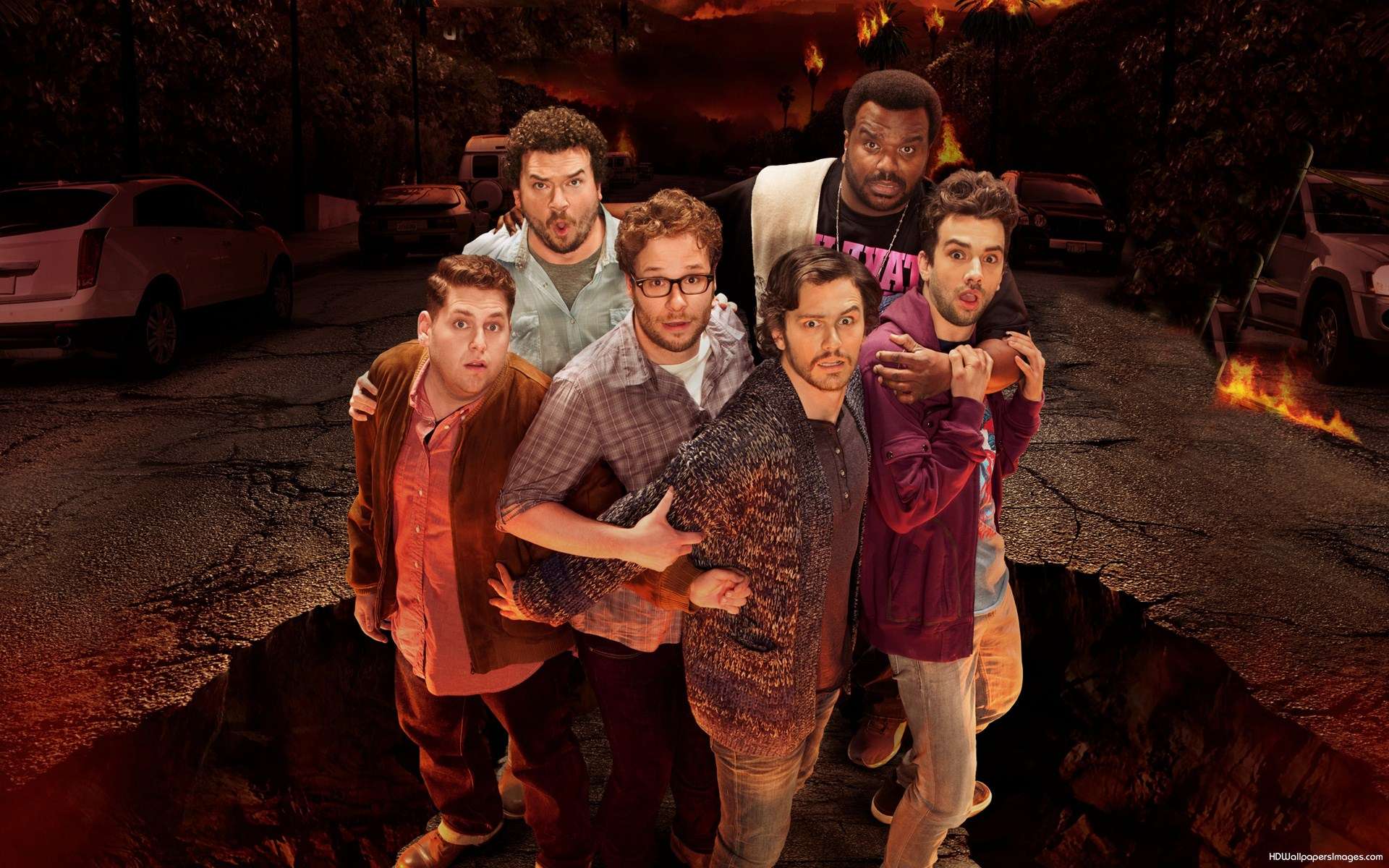 This Is the End – The Review

All I ever ask of a comedy is that it makes me laugh. Nothing more. It doesn’t matter what genre it is. Romantic. Spoof. Mockumentary. Sketch. Gross-out. I’m open to anything – as long as it tickles my funny bone.

So, along comes This Is the End, an apocalyptic comedy starring Seth Rogen, James Franco, Danny McBride, Craig Robinson and Jonah Hill, to name but a few. Rogen, as well as co-writing the screenplay also shares directing duties with Evan Goldberg (writer of Superbad and Pineapple Express.) 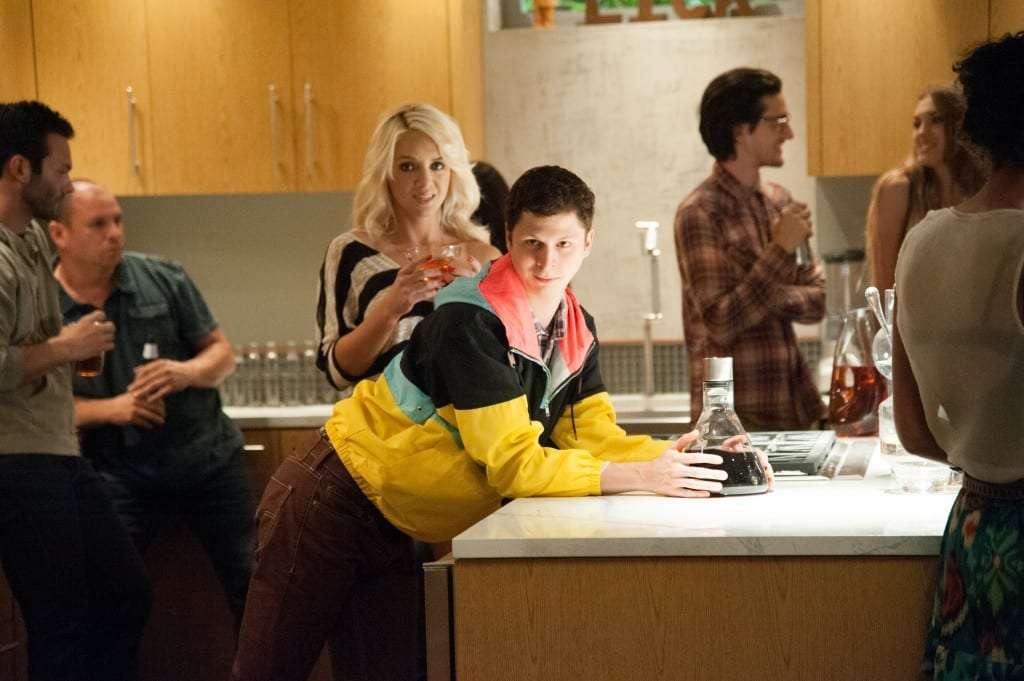 The premise is quite simple – a bunch of young Hollywood actors (all playing themselves) go to a huge party at James Franco’s house. During the raucous gathering, Seth Rogen and Jay Baruchel leave momentarily to go to a nearby convenience store and all hell breaks loose…literally. The apocalypse has begun. Amid the chaos, they manage to get back to Franco’s home where the survivors must work together if they are to have any chance of staying alive.

So, did This Is the End make me laugh? 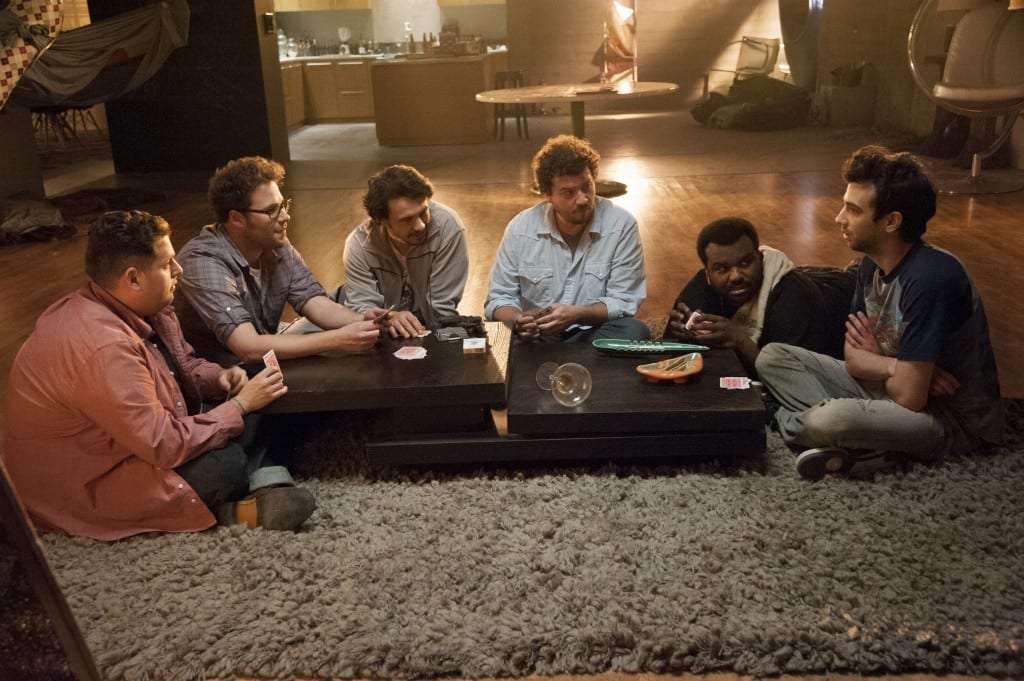 The cast of This Is the End ponder their fate.

On the face of it you’d think it’s not much of a stretch for these actors to play themselves but in actuality they’re either playing exaggerated versions of themselves or completely playing against type. And they seem to be having a lot of fun doing it. Believe me, a coked-up Michael Cera is possibly the funniest thing you will see in the cinema all year. And the more familiar you are with the various actors’ back catalogues, the more you’ll get out of this. However, it’s not in any way a prerequisite for enjoyment.

The script is witty and tight and the jokes come thick and fast. It feels as if much of the humorous banter between the cast was improvised. I’d wager that a lot of very funny material ended up on the cutting room floor. As you might expect from a quick glance at the cast list, a lot of the humour consists of cursing, slagging, more cursing, double entendres and just about every bodily fluid imaginable. It’s also jam-packed with Hollywood references and clever in-jokes. There are plenty of other little surprises throughout but I won’t spoil them here.

There isn’t a single weak link in the cast but one actor manages to totally dominate proceedings – Danny McBride. 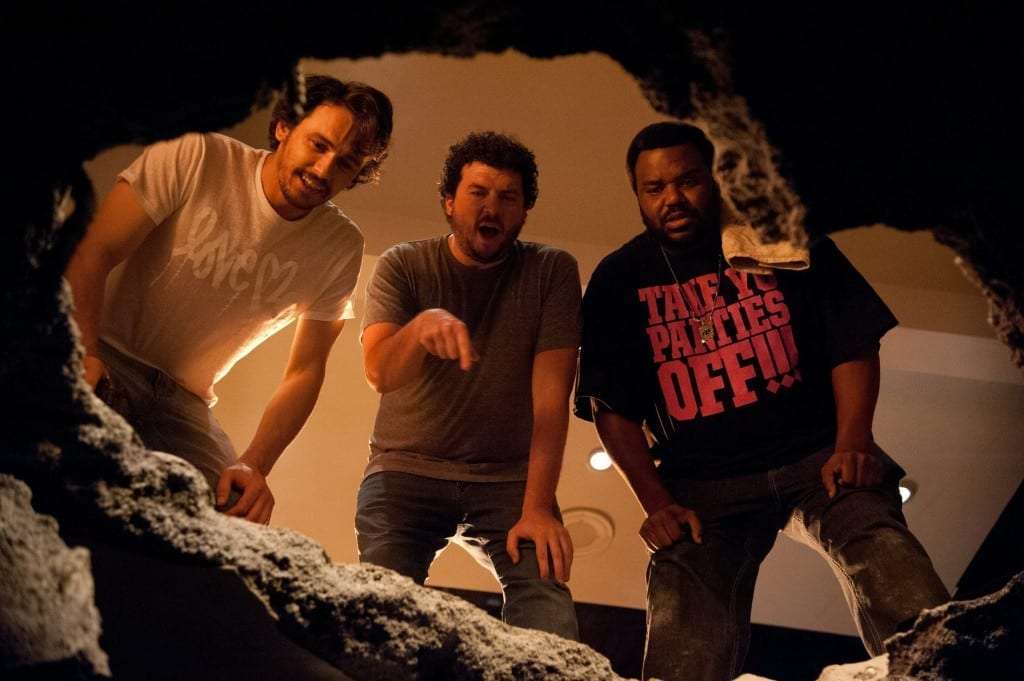 I’ll be completely honest – I’m not his biggest fan. I absolutely hated Your Highness and I just don’t get Eastbound & Down. But in This Is the End he absolutely steals every scene he is in. His character is completely self-centered and absolutely outrageous and every time it looks as if he’s about to redeem himself, he comes back bigger and badder and more obnoxious than ever. Other highlights include cameos by Emma Watson, Paul Rudd, Rihanna and a hilarious blink-and-you’ll miss-it appearance by Channing Tatum. 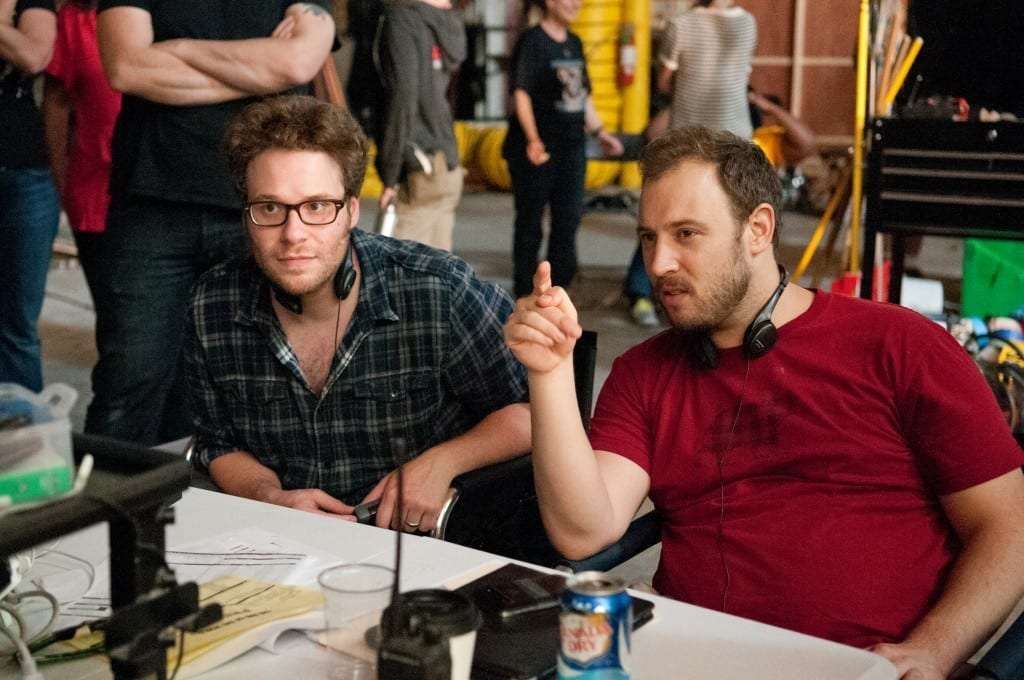 There are some very minor quibbles. A few of the special effects shots near the start are a little ropey and it does sag a little in the middle but ultimately the film builds to a satisfying, effects-laden finale. Debut directors Rogen and Goldberg do a great job of maintaining the tension between the principals and keeping the tone light, despite the apocalyptic subject matter. Given that most of the action takes place in one location, it always holds your interest. The film also has no problem dispatching major stars with glee, in a variety of inventive and gory ways. In fact, I haven’t seen so many big-name Hollywood actors bite the dust in a film since Tim Burton’s 1996 sci-fi comedy Mars Attacks! 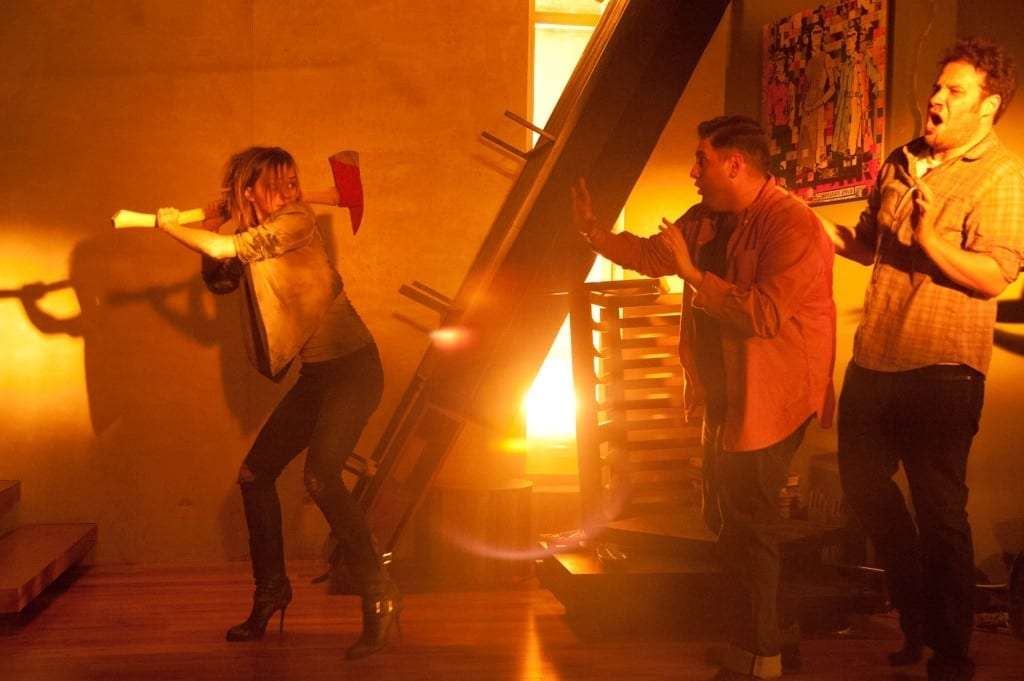 It will be interesting to see how this compares with the final part of Edgar Wright’s co-called “Cornetto Trilogy”, The World’s End, which is due out in July. It will certainly have a lot of work to do to be funnier than this.

There are some comedies that simply MUST be seen with an audience. This is one of them. The bottom line is that if you liked Superbad, Pineapple Express or Hot Tub Time Machine then you’ll love This Is the End. 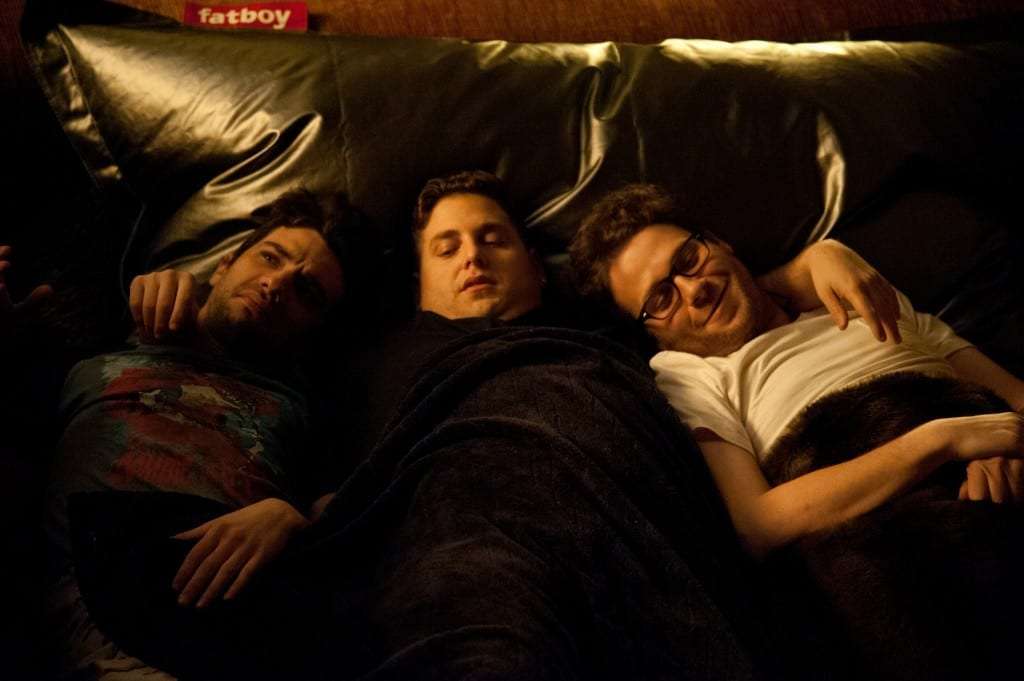 The cast of This Is the End get cuddly.

This Is the End opens in Ireland on the 28th of June.