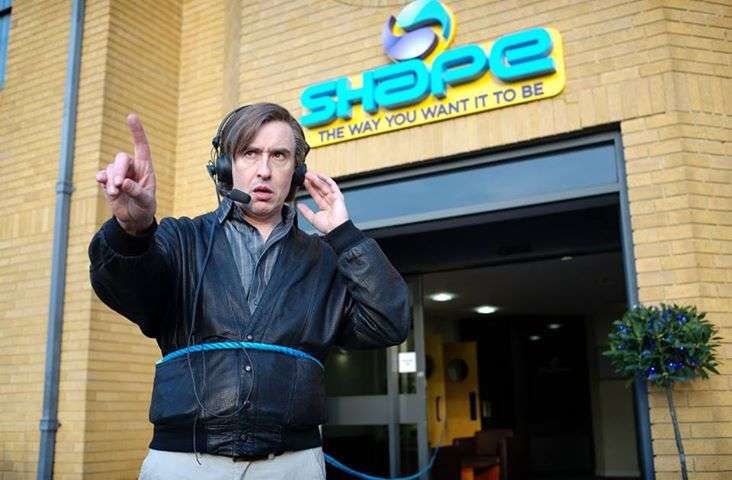 Ah haaa! You’re about to enter the world of radio presenter Alan Partridge. He is 55, presents on North Norfolk Digital, has a long suffering personal assistant called Lynn Benfield whom he frequently humiliates and is about to become a hero.

If you’re already a fan of Partridge you’ll be glad to know that Alpha Papa stays true to the TV magic, it doesn’t tarnish or dilute the character in any way. Normally I sit on the side of the fence that says sitcom-to-cinema adaptations are almost certainly destined to fail, so when I went to see Alpha Papa I expected to watch it cringing as I covered my eyes with my hands. Happily though, Coogan and his co-writers (including original Partridge contributors Peter Baynham and Armando Iannucci) have successfully pulled off the adaptation. This is, in part, down to the fact that the character of Alan Partridge is flexible enough to work on different formats.

As I mentioned previously, Alan’s long suffering PA, Lynn (Felicity Montagu) is back again, as is his Geordie pal Michael (Simon Greenhan) who has swapped his job for a position as a security guard in the radio station. This is where the story is centered around, North Norfolk Digital is undergoing some changes. They’ve been bought out and are in the process of being rebranded under a new name, “Shape”. Alan’s fellow ageing Jock, Pat Farrell (Colm Meaney) knows that something is up and fears losing his job. 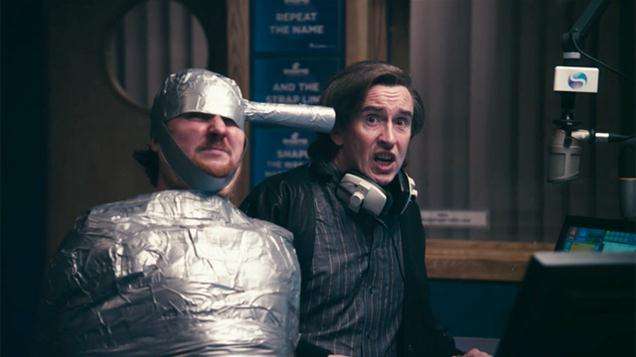 That happens, thanks to Alan secretly prompting the boardroom who’re responsible for the decision to “Just Sack Pat!”, and it results in Pat storming the station during the launch party of the newly branded “Shape” with a shotgun and takes the whole party hostage. Alan happened to be outside at the time so isn’t taken captive but he’s asked to act as mediator because of his ‘close’ friendship with Pat — who was not aware of Alan’s subterfuge. One good thing came out of the siege: Alan was finally back on the telly after all these years.

I know it doesn’t sound like much of a plot, it’s not exactly the Lord of the Rings, but it’s enough for the writers to revive Partridge and deliver a truck-load of jokes. For example, if you’re a fan of the classic tedious Partridge radio links, there’s plenty to satisfy you — my personal favourite being the question “who is the worst kind of ‘Monger’”: “Fish, Iron, Rumour or War”.

Director Declan Lowney (Father Ted and the Aviva ‘Laptop-aroony’ ads on TV) has managed to make it feel like a film, which is another pitfall sitcom-to-cinema adaptations faces. The editing is slick and there are some nicely executed point-of-view gags. Ultimately, Alan Partridge: Alpha Papa is a great achievement for Coogan, Lowney and their fellow writers. It may not travel all the way across the pond or scoop many awards, but it’s quite refreshing to see a British comedy that keeps it simple and stays local.

(Thanks to Ken Gaughran for his review of Alan Partridge: Alpha Papa. @Ken_Gok)