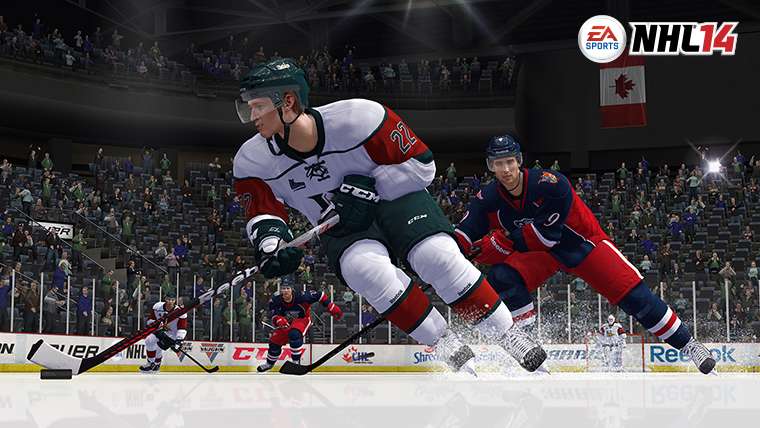 EA have announced at their Gamescom show in Germany that the demo for NHL 14 goes live today on Xbox Live and tomorrow on PS3. The NHL games have always been entertaining and have brought the action and excitement of the hockey league to life since the heady days of the Megadrive and Super Nintendo.

Play Now – Powered by a generation of EA SPORTS innovation, NHL 14 is hockey at its best. In the NHL 14 demo, players jump into the third period of a game and play as either the Boston Bruins or the Chicago Blackhawks to experience the speed, skill and aggression of the two teams from the 2013 Stanley Cup® Finals.

NHL 94 Anniversary Mode – Players will have a chance to experience a heated third period between the Boston Bruins and the Chicago Blackhawks in the NHL 94 Anniversary Mode. Featuring big goals and even bigger hits, the mode offers nods to its hockey video gaming roots through classic button controls, a retro presentation style including blue ice, classic star-shaped player indicators, organ music and much more.

Hockey Ultimate Team Tournament – Build, manage and compete in Hockey Ultimate Team (HUT) to create a fantasy team without boundaries. HUT in NHL 14 introduces all new features including online seasons and an auction assistant. In the NHL 14 demo, take part in a mini tournament against the Halifax Mooseheads, Boston Bruins, Chicago Blackhawks and Team Canada.

The game itself won three awards outright at E3. Quite a haul for a sports title and also walked away with the critics award for best sports title at the event. Which claimed it contained “Big hits, real fights and unbelievable skill and speed, the core values of the sport” I’m all for maintaining the core values of the sport, but I for one can’t wait to take part in a good old fist fight on the ice. PUCK-er up! GC