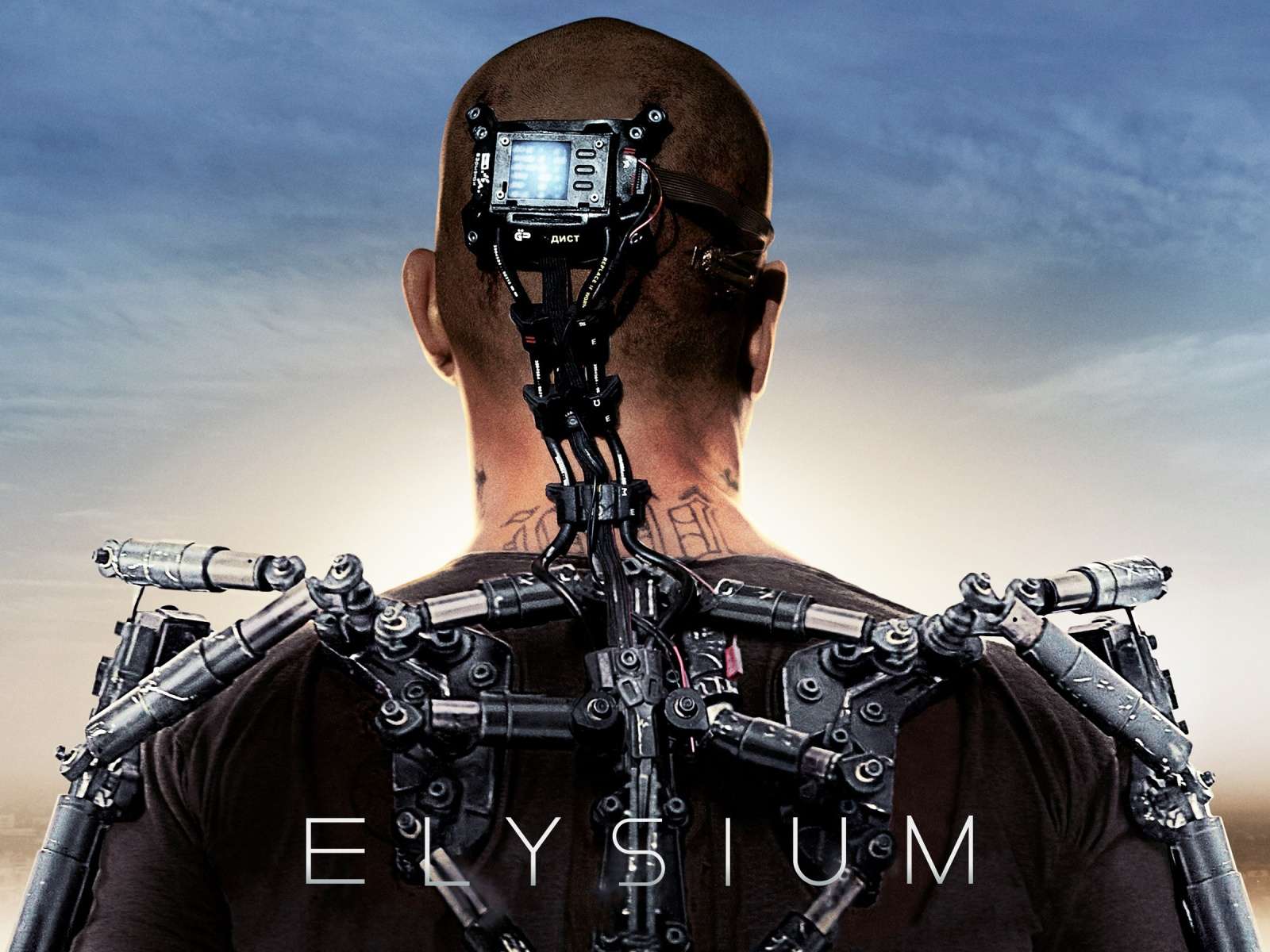 It’s hard to believe that Elysium is only director Neill Blomkamp’s second feature film. His 2009 debut, District 9, made such an impact and put him firmly on the cinematic map as someone to watch. He showed he had a great visual style and the ability to tell a compelling story with a lot of heart…and all for a moderately low budget. This time out he has significantly more money to play with and a very impressive cast as well (Matt Damon, Jodie Foster and William Fichtner). But unfortunately, despite his best efforts, he doesn’t quite fulfill that early promise.

The film is set in the year 2159. Earth has become an overpopulated hell-hole, riddled with poverty, crime and disease. The very wealthy live on a pristine man-made space station called Elysium, which orbits the earth. On Elysium there is no poverty, no crime and no disease. Any ailment can be cured by state-of-the-art medical devices in a matter of seconds but this technology is inaccessible to the ordinary citizens of Earth, many of whom are willing to risk their lives in an effort to escape. Matt Damon plays Max, a Los Angeles-based ex-car thief gone straight who works on an assembly line, building robots. But when he is exposed to radiation in an industrial accident and given mere days to live, he decides that he has to get to Elysium to help himself…and, in the process, many others. However, getting there won’t be easy, especially as its defense secretary is the ruthless Delacourt (played by Jodie Foster) whose main role is to prevent any craft from reaching Elysium illegally. 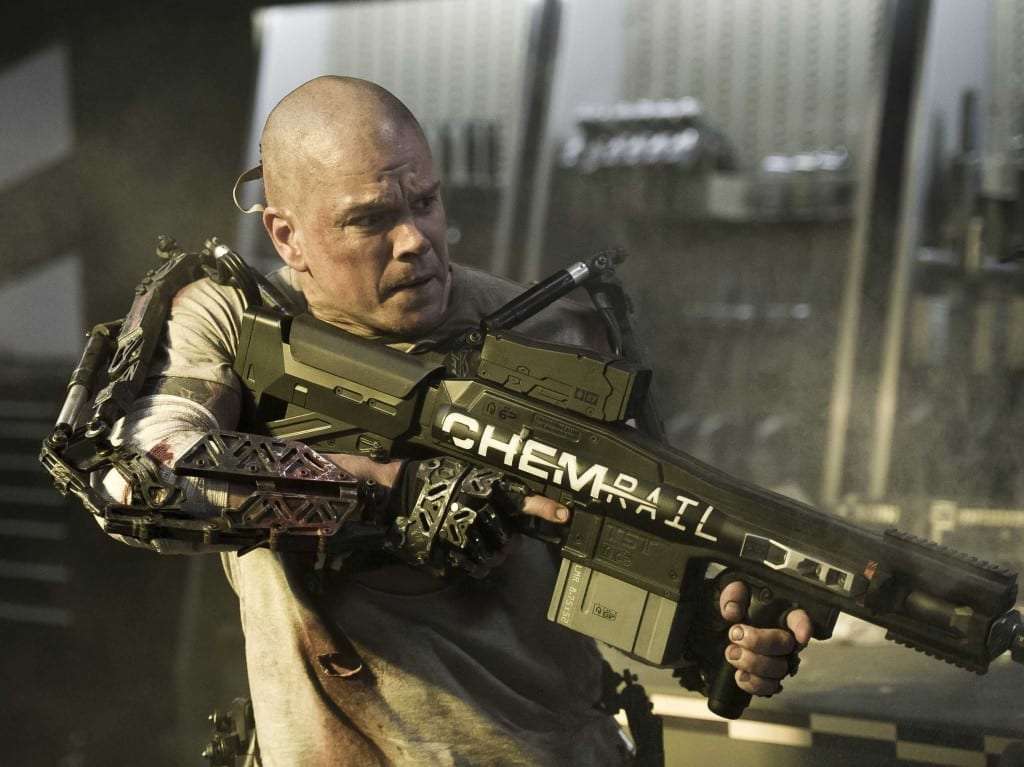 So, with such a great premise, great director and great cast, why does Elysium fail to engage on so many levels? The main culprit is the weak script. All of the characters are severely underwritten and it makes it hard to sympathize or identify with them or their plight. The story is riddled with inconsistencies and too often relies on silly coincidences or just resorts to lazy cliches. The plot is so full of holes it could be packaged and sold as Swiss cheese. There’s a subplot involving his childhood friend and her sick daughter that feels tacked-on for some sort of emotional impact. And the less said about the clunky, ham-fisted flashbacks the better. But the always-reliable Damon does the best job he can with the weak material and just about manages to engage as our reluctant hero. 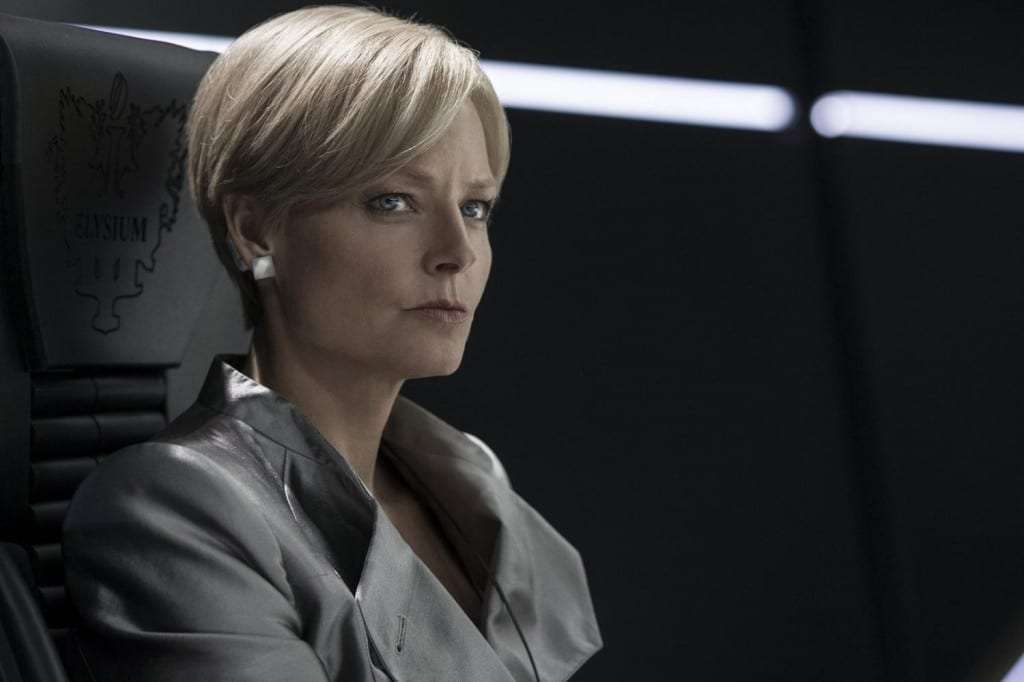 The film also has the distinction of giving us what is quite possibly Jodie Foster’s worst performance in living memory. I don’t know if it’s down to the script, poor direction or just laziness but she seems very unsure of how to play her role. And her character’s accent is one of the most bizarre I have heard in a film in a very long time. Seriously, what IS it supposed to be? English? French? It has to be heard to be believed. And her character is dismissed so swiftly that I wonder what purpose she served in the film at all. In fact, all characterization and drama is thrown out of the window in the final act and the film descends into very standard Hollywood action fare. And the hackneyed, sugar-coated ending actually poses more difficult questions than it answers. 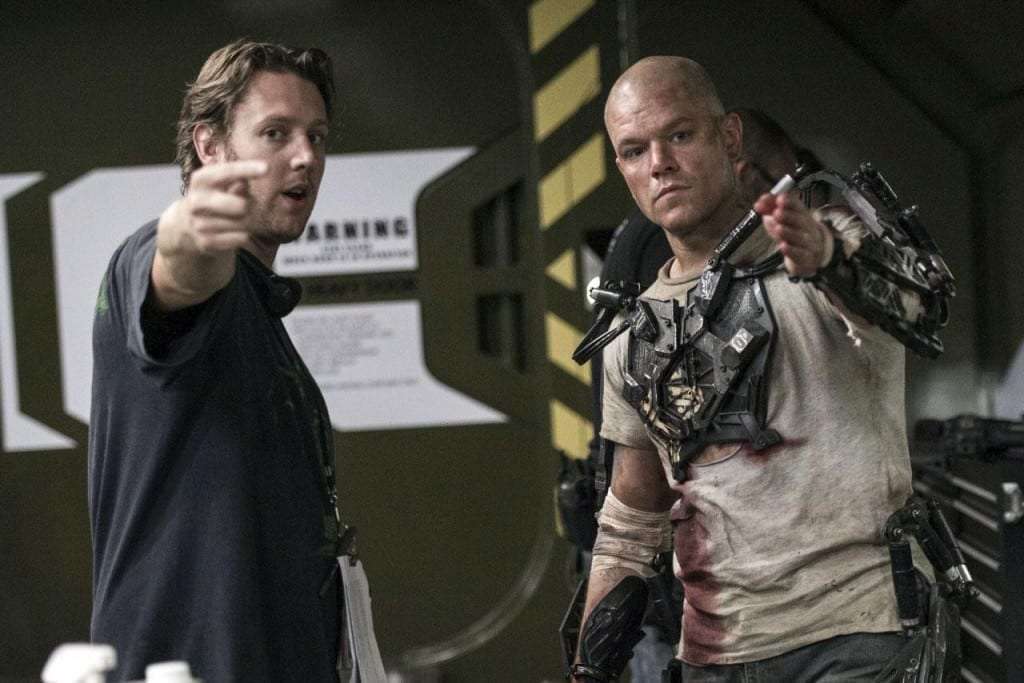 However, this being a Blomkamp film, there is still quite a lot of good stuff in here too. The visuals are simply stunning. Futuristic Los Angeles looks like a giant, sprawling shanty town. And, in stark contrast, the Elysium colony itself is magnificent. Plus, like District 9, the vast majority of the action takes place in broad daylight and this makes the visual effects all the more impressive. The film is stuffed with neat gadgets and high-tech weaponry. The very cool exoskeleton that Damon gets to wear is another highlight, but you’ll need strong stomach for the scene where it is literally screwed into his nervous system. And on that note, there are a couple of very gory deaths and horrific injuries (one in particular will take your breath away, but to say who it involves would be a spoiler). 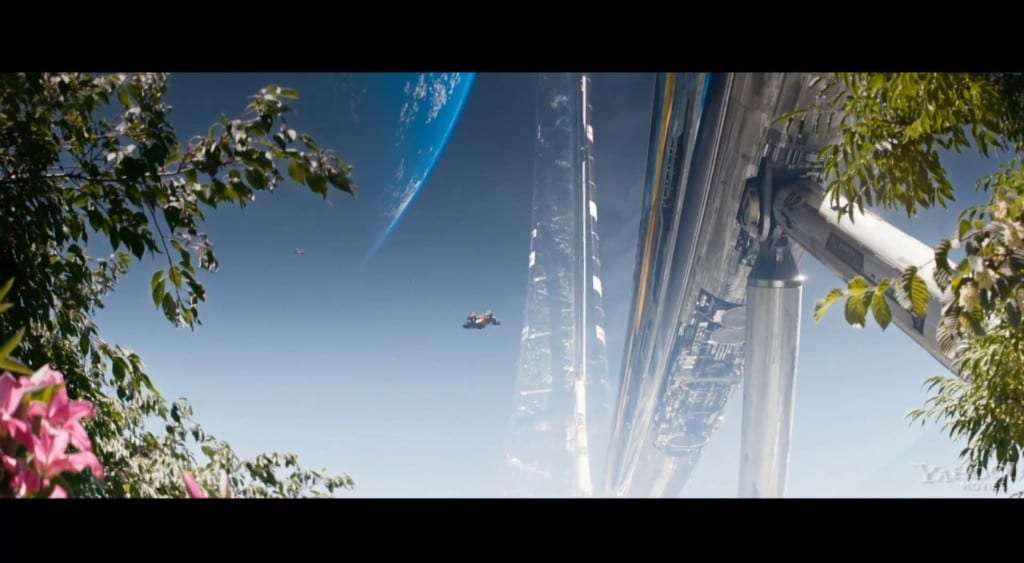 Elysium as seen from Earth

And then there is Sharlto Copley (District 9, The A-Team). He plays Kruger – a sadistic sleeper agent on Earth who works for Foster. To say he steals the show is an understatement. His performance is gloriously over the top and he gets to chew the scenery to his heart’s content. Copley looks as if he is relishing the opportunity to play the bad guy and he doesn’t hold back – at all. He is simply stunning. In fact, Elysium is worth seeing for Copley alone. 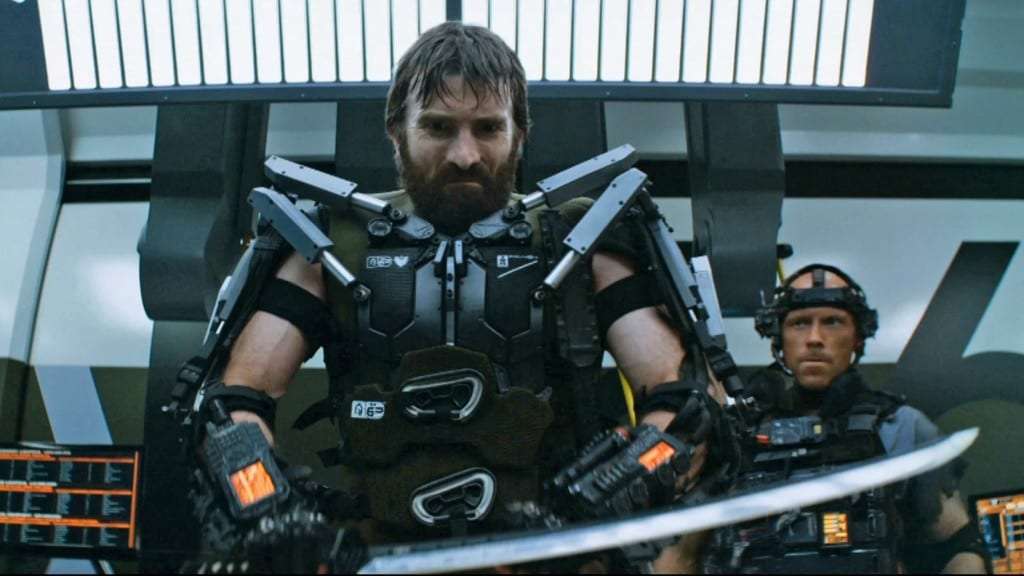 District 9 was always going to be a very hard act to follow and Blomkamp does his very best here, but ultimately the film is a disappointment. Maybe the comparisons between the two films are unfair and Elysium should be judged solely on its own merits but it’s just too similar to its predecessor in far too many ways. The story. The tone. The look. Blomkamp needs to try something very different next time out to prove he’s not just a one-trick pony. Having said that, details of his next project, entitled Chappie, emerged recently and it looks like he’s sticking to what he knows best. It will be based on his own 2004 short film, Tetra Vaal and Copley has already been cast in the lead role, which is great news at least. 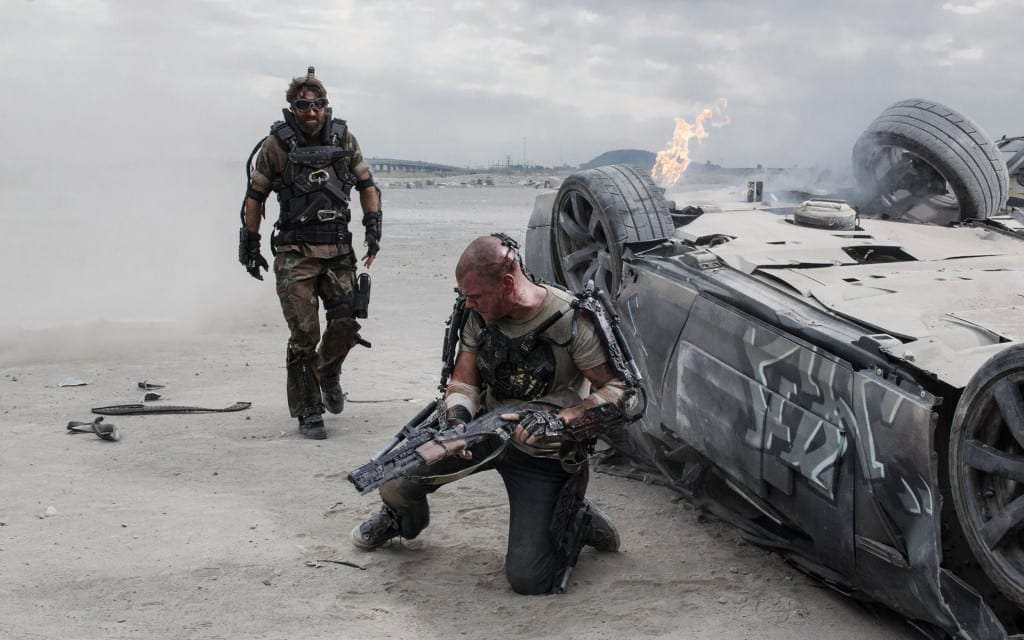 Elysium isn’t perfect but still worth a watch

As a standard action movie it’s pretty solid but with Blomkamp at the helm my expectations were for something with a little more substance. Overall, Elysium is certainly not terrible but could have (and really should have) been so much better.

Elysium opens in Ireland on Wednesday the 21st of August.