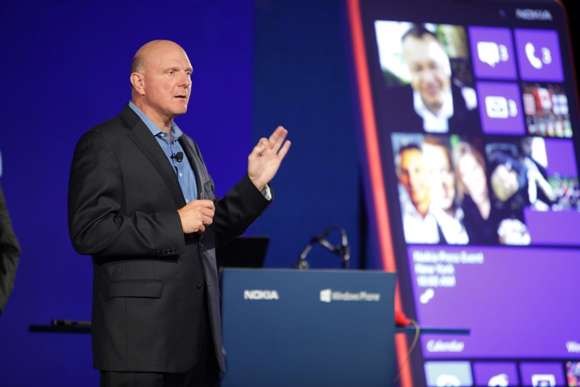 Steve Ballmer Stepping Down as Microsoft CEO Within 12 Months

Steve Ballmer has announced that he will step down as the CEO of Microsoft within the next 12 months.
Ballmer will stand down once a successor has been found for his role. He sent an open letter to all Microsoft employees today detailing why he is leaving.
In it he said:

There is never a perfect time for this type of transition, but now is the right time.

Microsoft is currently in the middle of a massive reorganization into a devices and services provider, rather than just services alone. Many speculate that Ballmer is another roadblock in the transition, while Ballmer says that the company needs someone that’ll be more available in the long-term.

We need a CEO who will be here longer term for this new direction.

Microsoft stocks have already jumped up 9% since the announcement, which is ironically sad – although Ballmer has a significant share in Microsoft so he’s actually gained from his own retirement.

“As a member of the succession planning committee, I’ll work closely with the other members of the board to identify a great new CEO,” said Gates. “We’re fortunate to have Steve in his role until the new CEO assumes these duties.”

Steve Ballmer joined Microsoft in 1980 and was chosen as Bill Gates’ replacement as CEO in 2000, since then the software giant has released Windows XP, Vista, 7 and now 8, while also releasing the Xbox, Xbox 360 and Kinect.
Steve Ballmer was also leading the charge for a more touch-based Windows experience with Windows 8 and RT, and although Microsoft missed the mobile market with Windows Mobile, they’re slowing clawing back with Windows Phone.

Read the full Press Release and Ballmer’s letter below.

REDMOND, Wash. — Aug. 23, 2013 — Microsoft Corp. today announced that Chief Executive Officer Steve Ballmer has decided to retire as CEO within the next 12 months, upon the completion of a process to choose his successor. In the meantime, Ballmer will continue as CEO and will lead Microsoft through the next steps of its transformation to a devices and services company that empowers people for the activities they value most.

“There is never a perfect time for this type of transition, but now is the right time,” Ballmer said. “We have embarked on a new strategy with a new organization and we have an amazing Senior Leadership Team. My original thoughts on timing would have had my retirement happen in the middle of our company’s transformation to a devices and services company. We need a CEO who will be here longer term for this new direction.”

“The board is committed to the effective transformation of Microsoft to a successful devices and services company,” Thompson said. “As this work continues, we are focused on selecting a new CEO to work with the company’s senior leadership team to chart the company’s course and execute on it in a highly competitive industry.”

“As a member of the succession planning committee, I’ll work closely with the other members of the board to identify a great new CEO,” said Gates. “We’re fortunate to have Steve in his role until the new CEO assumes these duties.”

I am writing to let you know that I will retire as CEO of Microsoft within the next 12 months, after a successor is chosen. There is never a perfect time for this type of transition, but now is the right time. My original thoughts on timing would have had my retirement happen in the middle of our transformation to a devices and services company focused on empowering customers in the activities they value most. We need a CEO who will be here longer term for this new direction. You can read the press release on Microsoft News Center.

This is a time of important transformation for Microsoft. Our new Senior Leadership team is amazing. The strategy we have generated is first class. Our new organization, which is centered on functions and engineering areas, is right for the opportunities and challenges ahead.

Microsoft is an amazing place. I love this company. I love the way we helped invent and popularize computing and the PC. I love the bigness and boldness of our bets. I love our people and their talent and our willingness to accept and embrace their range of capabilities, including their quirks. I love the way we embrace and work with other companies to change the world and succeed together. I love the breadth and diversity of our customers, from consumer to enterprise, across industries, countries, and people of all backgrounds and age groups.

I am proud of what we have achieved. We have grown from $7.5 million to nearly $78 billion since I joined Microsoft, and we have grown from employing just over 30 people to almost 100,000. I feel good about playing a role in that success and having committed 100 percent emotionally all the way. We have more than 1 billion users and earn a great profit for our shareholders. We have delivered more profit and cash return to shareholders than virtually any other company in history.

I am excited by our mission of empowering the world and believe in our future success. I cherish my Microsoft ownership, and look forward to continuing as one of Microsoft’s largest owners.

This is an emotional and difficult thing for me to do. I take this step in the best interests of the company I love; it is the thing outside of my family and closest friends that matters to me most.

Microsoft has all its best days ahead. Know you are part of the best team in the industry and have the right technology assets. We cannot and will not miss a beat in these transitions. I am focused and driving hard and know I can count on all of you to do the same. Let’s do ourselves proud.