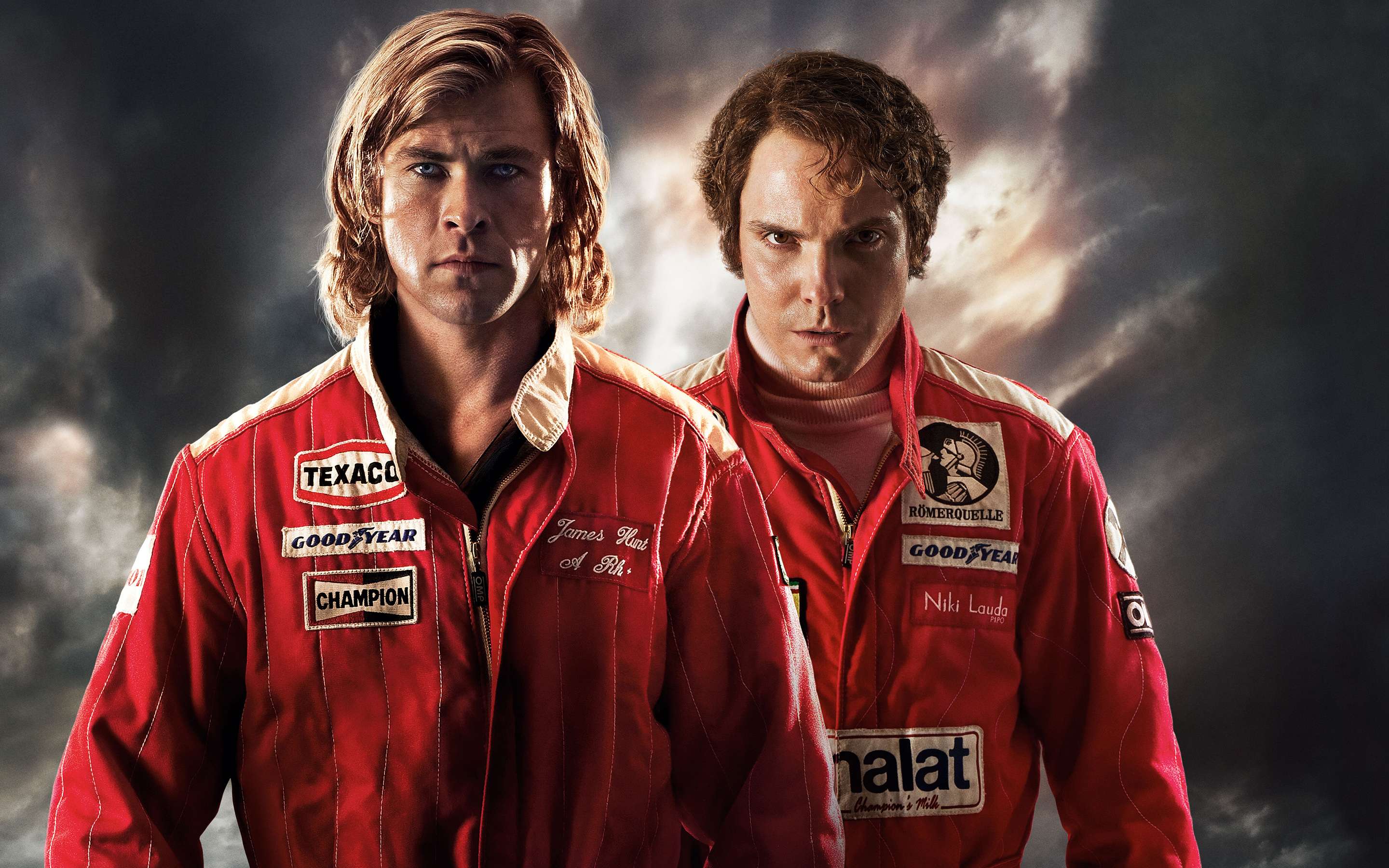 To say that the portrayal of motorsport in film to date has been patchy is an understatement. There have been the good (Grand Prix, Le Mans, Days of Thunder – yes, I like it) the bad (Bobby Deerfield) and the downright ugly (Driven). It is a difficult sport to translate onto the silver screen, compounded by the fact that people who don’t like motor racing tend to stay away from these films in droves. (I’m not counting the Fast and the Furious franchise, by the way.)

But that all changed in 2011 with the release of Asif Kapadia’s stunning film, Senna. It was a massive critical and commercial success and managed to appeal to both F1 fans and non-fans alike. It proved that if you have a compelling story to tell with engaging characters then you have the makings of a great film that can transcend interest in an individual sport. AND…it was a documentary to boot. 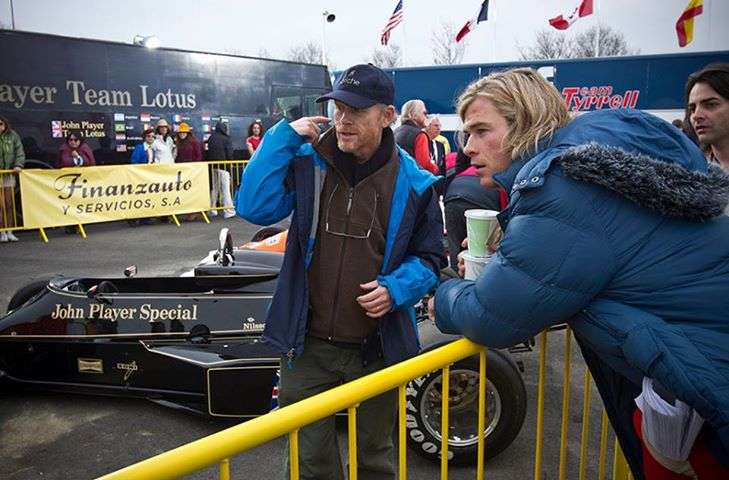 So along comes Ron Howard’s Rush, which tells the dramatic true story of the 1976 Formula One title fight between the handsome, flamboyant British driver, James Hunt and the meticulous, no-nonsense Austrian, Niki Lauda (who was cruelly nicknamed “The Rat” due to his appearance). The two men were bitter rivals on and off the circuit and this action-packed, dramatic season marked the very pinnacle of their conflict. James Hunt himself once remarked of the nail-biting 1976 season – “You couldn’t make this up!” And it makes for a compelling story.

The film starts with the cars lining up on the grid for the German Grand Prix at the Nürburgring, one of the most dangerous circuits in the world. But once the race begins we flash back to an earlier time when both men were starting to make their way in the world of motor racing. We spend time with each driver as they fight their way through Formula 3, meet their respective partners, make the leap into F1 and forge their rivalry. It’s an effective device as by the time we find ourselves back on the starting grid of the German Grand Prix again, we feel as if we know the two men behind the visors and, more importantly, we care about them. The two men were polar opposites of one another but were both equally driven by a mutual desire to beat one another on the track. 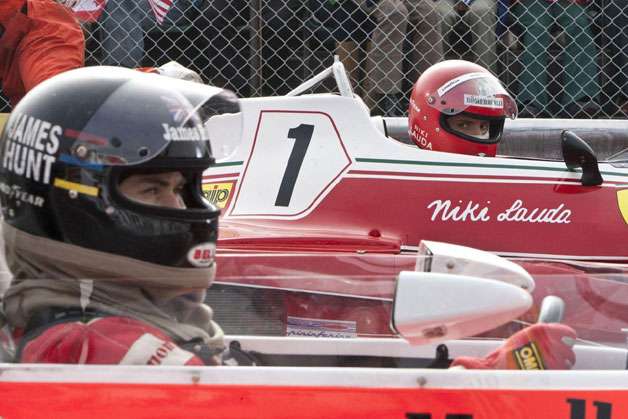 Hunt and Lauda line up on the grid

Many of the key races and defining moments of the season are faithfully recreated. Ron Howard has done an incredible job of putting the audience right in the middle of the furious action. The racing scenes are frenetic but easy to follow, which is a rare thing these days. Cinematographer Anthony Dod Mantle has given the film a very stark, 1970s look. Another admirable thing about the movie is the minimal use of CG to achieve the on-track spectacle. Howard spent a lot of time shooting real F1 cars at real racing circuits with precision drivers at the wheel, recreating classic overtakes and daring maneuvers. The film also seamlessly blends real racing footage from the era to flesh out the action. And it often reminds us that these men raced at a time when drivers frequently lost their lives in the pursuit of glory. Composer Hans Zimmer does a great job as always with an understated, and frequently moving, score.

But the real triumph of Rush, however, is the casting of the two lead roles. Chris Hemsworth (Thor) and Daniel Brühl (Inglourious Basterds) were born to play James Hunt and Niki Lauda. 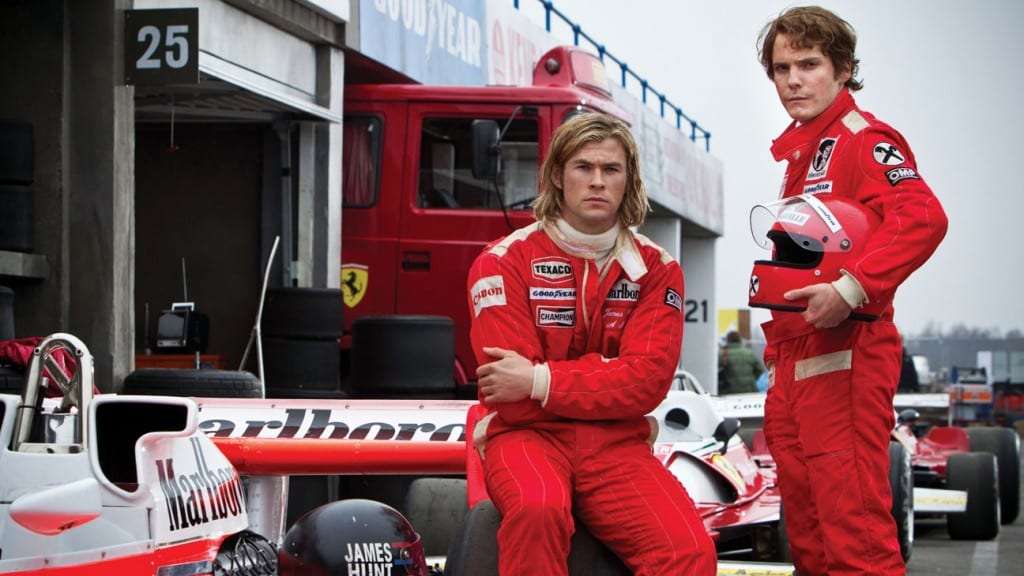 Hemsworth and Brühl as Hunt and Lauda

Hemsworth arguably has the easier job of the two. He gets to have all the fun playing the hard-drinking, womanizing, flamboyant, playboy racing driver. But he also manages to convincingly capture Hunt’s darker moments too (of which he had plenty it seems). 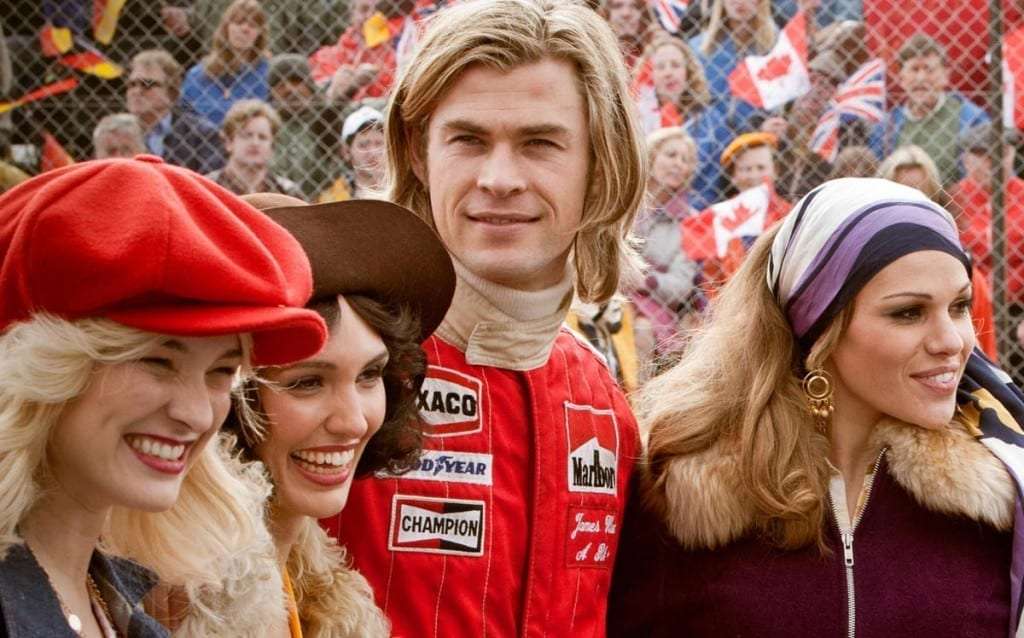 Chris Hemsworth having all the fun as James Hunt

But the real revelation here is Daniel Brühl as Niki Lauda. I simply don’t have enough superlatives to describe his performance. He simply IS Lauda. Anyone with even a passing interest in Formula One will know that Lauda is still a familiar face around the paddock and he is often interviewed at race meetings. I have seen him on my television screen many times and have heard him speak often and Brühl just NAILS it. It is truly astonishing. And to see what Lauda went through in the wake of his horrific accident has given me a new-found respect for the man. 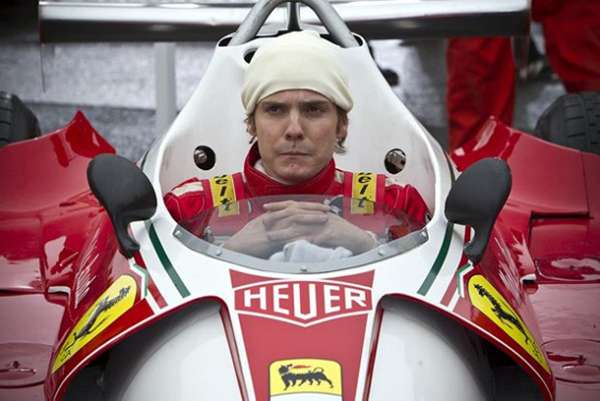 Daniel Brühl does an incredible job as Niki Lauda

I was a little worried about half an hour into the film that maybe audiences wouldn’t like EITHER of the two protagonists as they are both quite unlikeable in their own way. But trust me, by the end of the film you’ll be rooting for one (or maybe even both) of them.

The supporting cast do a good job too but make no mistake, this film belongs to Hemsworth and Brühl…equally. If there is any justice in this world one or both of the actors will at the very least be nominated for their performances. They are simply stunning. And the very brave decision to use some real-life archive of Hunt and Lauda at the very end of the film further justifies the decision to cast these two actors. It was a risky decision and could have shattered the illusion but it isn’t jarring at all. It just serves to remind us that Hunt and Lauda were real people and it also further illustrates what a great job Hemsworth and Brühl have done in their respective roles. 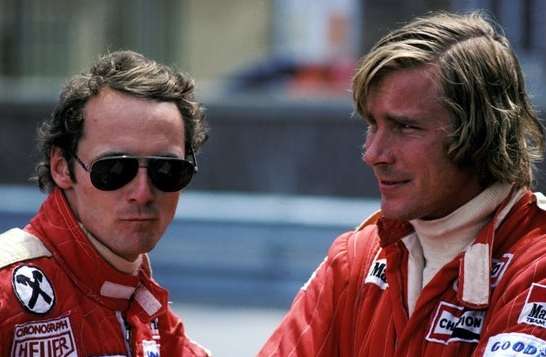 As a big Formula One fan I was a little bit nervous going to see Rush as I was afraid it would just be a trite “Hollywood” version of F1. Nobody likes to see their favourite sport misrepresented in any medium, especially cinema. But F1 nuts need not worry – Howard and his team have really done their homework. After seeing the film I even went on to YouTube to see some of the incidents portrayed in the movie and they got it absolutely spot-on. Of course there is a little bit of dramatic license taken here and there but there is a lot of story to cram into two hours so the occasional shortcut is forgivable.
I would also strongly advise that if you are not a fan of F1 or you are not familiar with the outcome of the 1976 season, then do yourself a favour and don’t look it up before you see this film. It will make for an even more rewarding experience. 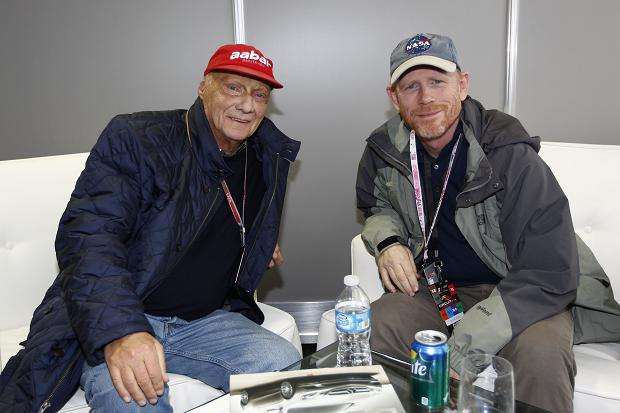 I really hope Rush is a success. It deserves to be as it’s a cracking film with a compelling story to tell and it contains two incredible central performances. And it will hopefully open the gates for more quality motor racing films in the future. Unmissable.

Rush opens in Ireland on Friday the 13th of September.