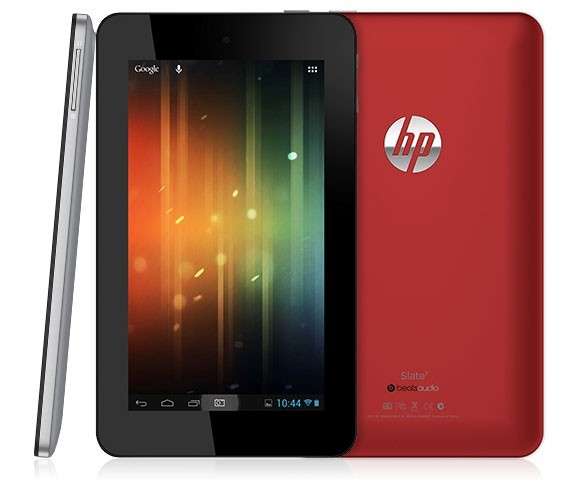 The Slate 7 is HP’s attempt at breaking the 7-inch tablet market which has become a very competitive arena for companies who produce tablet devices.

The Slate 7 is an Android OS based tablet and comes pre-loaded with Android Jelly Bean (4.1.1). It comes with 8Gb of internal memory, with 5.7Gb of that free and usable, but this can be expanded through an SD card slot which will take cards up to 32Gb in size so you’ll never be begging for extra memory.

With 1Gb of RAM and a 1.6GHz Dual-Core Cortex-A9 processor the Slate is also not sluggish by any means. Flicking about through the different menu screens is done very efficiently, with no delays in response as can happen with some lower-spec devices and will run the majority of apps, including 3D games with ease. The screen, which at a 1024×600 resolution may sound weak compared to some of its competitors (Nexus 7, Galaxy Tab 7.0) but is not something to be put off by. The LCD display is crystal clear and intensely colourful. Watching videos & movies can be done with absolutely no loss of quality and books & comics can be read as easily as if they were on paper in front of you.

For the audiophiles among us, the HP Slate also comes with Beats Audio software, which gives listening to music on it a nice kick, especially when done with Beats headphones. This setting can be turned on and off, and comes with different settings for different listening styles. If you prefer over-head headphones, in-ear or just using the tablets speakers the settings can be changed to optimise your listening experience.

There are back (3.15MP) and front (VGA) facing cameras. These cameras are not the best you can find on a tablet, but for use with Skype, posting pictures to social networks and general quick snaps you won’t be too disappointed.

The battery life is also quite impressive with it being capable of lasting a good 8-10 hours of pretty much constant use including games, which can be notorious battery hoggers on some devices, but the Slate copes well and you won’t find yourself panicking for power too much should you be on the move.

While the HP Slate 7 can lack at times in comparison to some of its bigger brothers in the 7-inch tablet world, it is definitely not one to be shrugged off. At €129.99 (PC World) it is also very affordable and you can do a lot worse for that price.

Overall, the HP Slate 7 is a brilliant device, especially for anyone looking to buy a tablet for the first time or looking for one that will do all the little things they will need it to, like browse the web, gaming, social networking, music and video. If this is what you’re after, or have a tech-head to please this Christmas then you need not look any further!

This review was written by Robbie Henry.