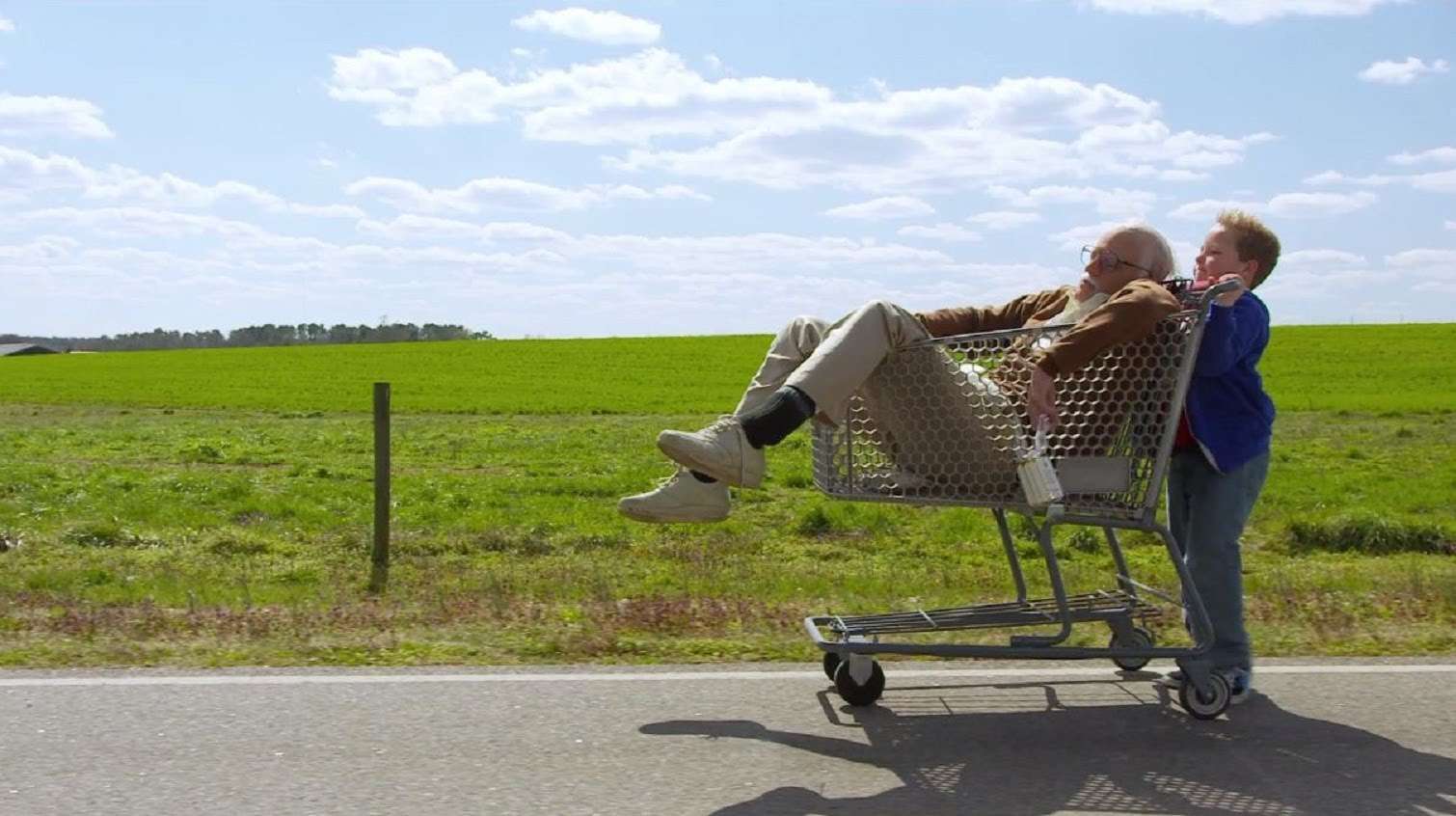 Bad Grandpa is the first non-Jackass film from Dickhouse Productions (yes, Dickhouse). Directed by Jackass veteran, Jeff Tremaine, it features a heavily made-up Jackass frontman, Johnny Knoxville, as the 86-year-old Irving Zisman. Upon learning that his wife has died, he realises he is finally a free man and can do what he wants. But he is soon saddled with his nine-year-old grandson (Jackson Nicoll) as his mother is facing jail time. 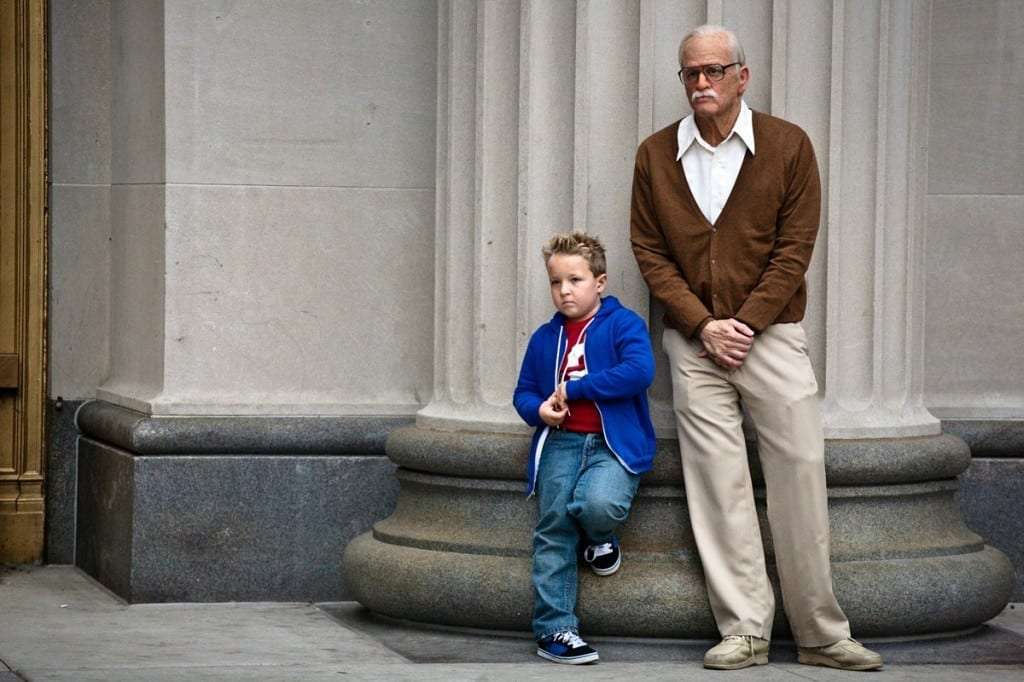 So, Irving decides hit the road with Billy to deliver him to his deadbeat dad on the other side of the country. Along the way they get to perform various stunts and pranks and the action is captured with hidden cameras. And all this is really one giant excuse to have Knoxville dress up as an old man and do very, very outrageous things.

In many ways the film’s structure and format is very similar to 2006’s Borat – a fictional character goes on a road trip with a companion and plays hidden camera pranks on unsuspecting members of the public. And for the most part it actually work very well. 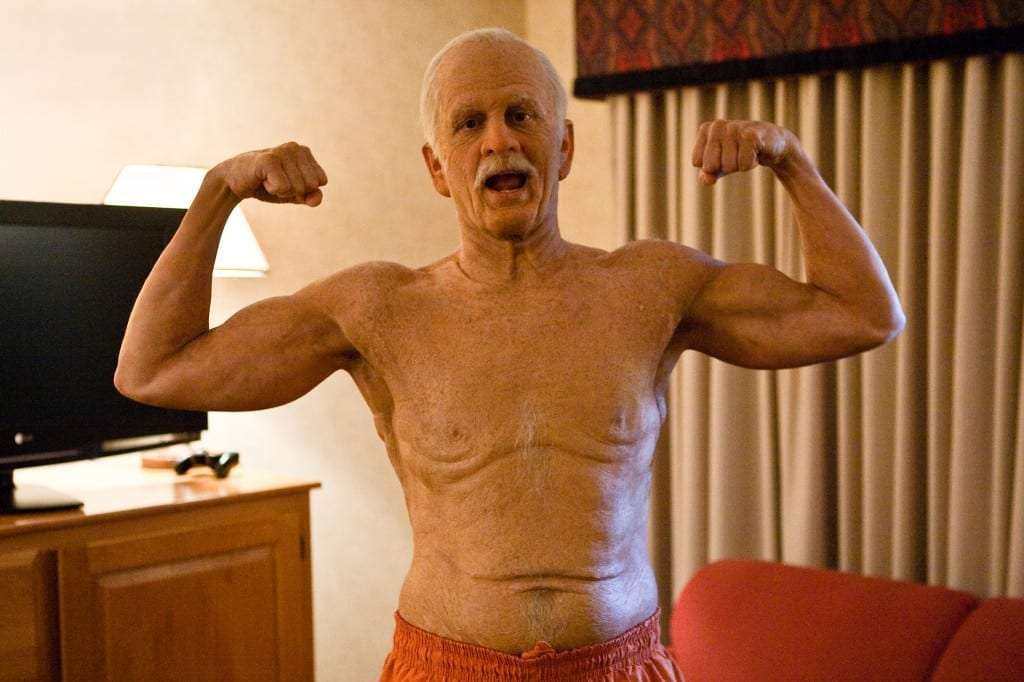 The “Bad Grandpa” character had already featured in previous Jackass outings but this is the first time he has been given his own spin-off film. To be honest the skits where Knoxville (and Spike Jonze) dressed up as elderly people were some of my least favourite Jackass segments. So the prospect of watching an entire film based around this character filled me with dread. But the result is actually refreshing, engaging, and most of all, funny.

We get to see a botched funeral service, furniture removal men getting more than they bargained for, a ruined wedding reception and an assortment of awkward social situations and bizarre conversations. And there is a scene that takes place at a children’s beauty pageant that has to be seen to be believed. But to say too much more about the skits would be to give it away. 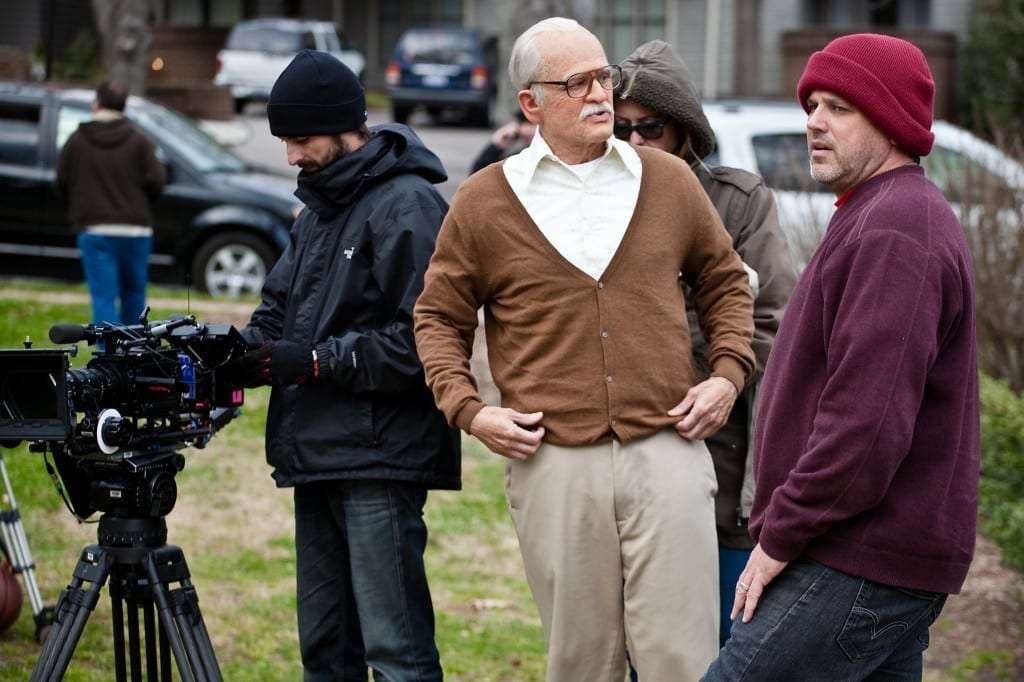 There are inevitably some set-ups that fall a little bit flat but Tremaine, who honed his skills directing the Jackass TV show and films, has a knack for knowing when enough is enough and swiftly moves on to the next. So, if you don’t like the current gag you don’t have to wait too long until a new one comes along. Also, like Jackass, the jokes are a little crude at times but are never mean-spirited. And make sure you stay for the end credits as you get to see the reactions of the prank victims as they are told they were being filmed.

Like Borat, there are some scripted scenes but these exist purely to drive the (paper-thin) narrative and link one set piece to the next. They aren’t particularly funny but they are mercifully short. And the film’s overall running time is only 92 minutes so it never outstays its welcome. 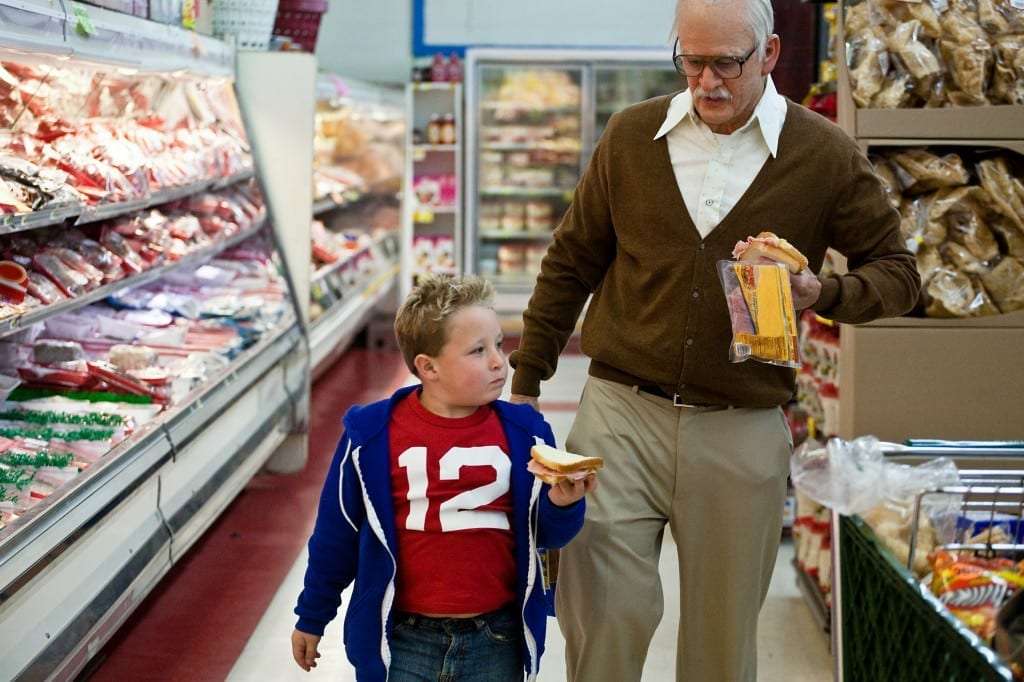 Knoxville is his usual mischievous self and manages to make his personality shine, even though he’s unrecognisable under layers of latex. And nine year-old Jackson Nicoll is a revelation as the grandson, Billy. He has great chemistry with Knoxville and has an incredible gift for saying the most outrageous things to complete strangers without cracking a smile. But the real stars here are the hapless victims who get caught up in the shenanigans. Some of their reactions are absolutely priceless and you find yourself wondering how you’d react in a similar situation. The film also has a heart, which I found surprising. Even though you know that the characters are fictitious, you still feel their bond grow over the course of their journey.

If the film is a success we’ll no doubt see a sequel at some point. Or at the very least, we may get a Bad Grandpa 1.5, as it’s evident from the outtakes that there were many, many scenes that were shot but never made the final cut. 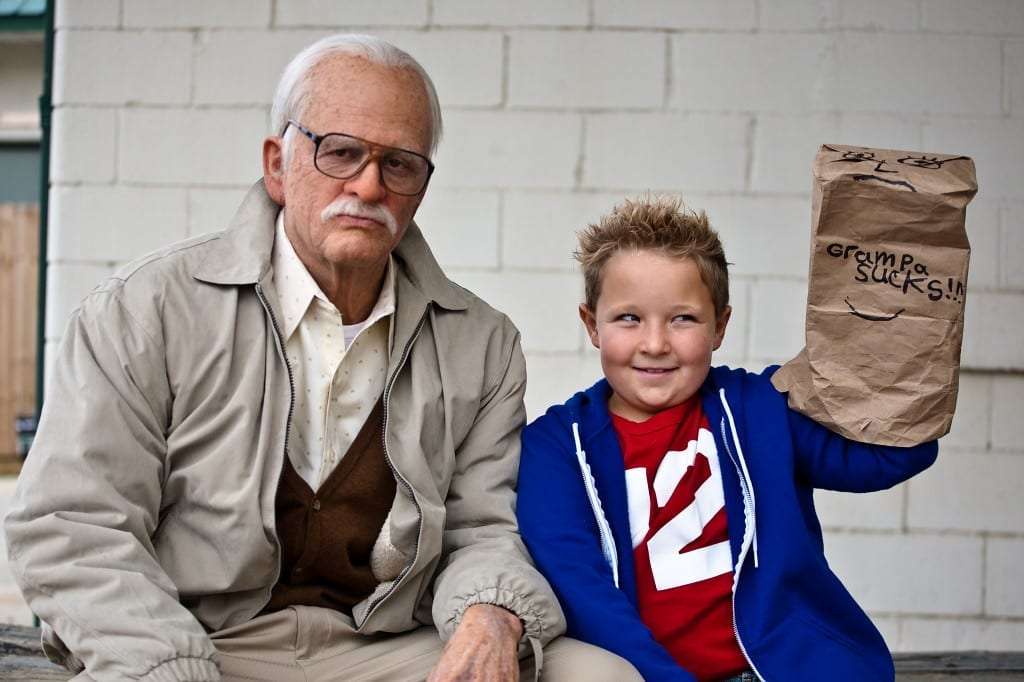 It’s not high art – far from it. But its not pretending to be. It’s very silly and juvenile at times. But there are some big, big laughs to be had. So, leave your brain at the door, sit back and enjoy.

Bad Grandpa is dedicated to Ryan Dunn, the member of the Jackass team who died in 2011. 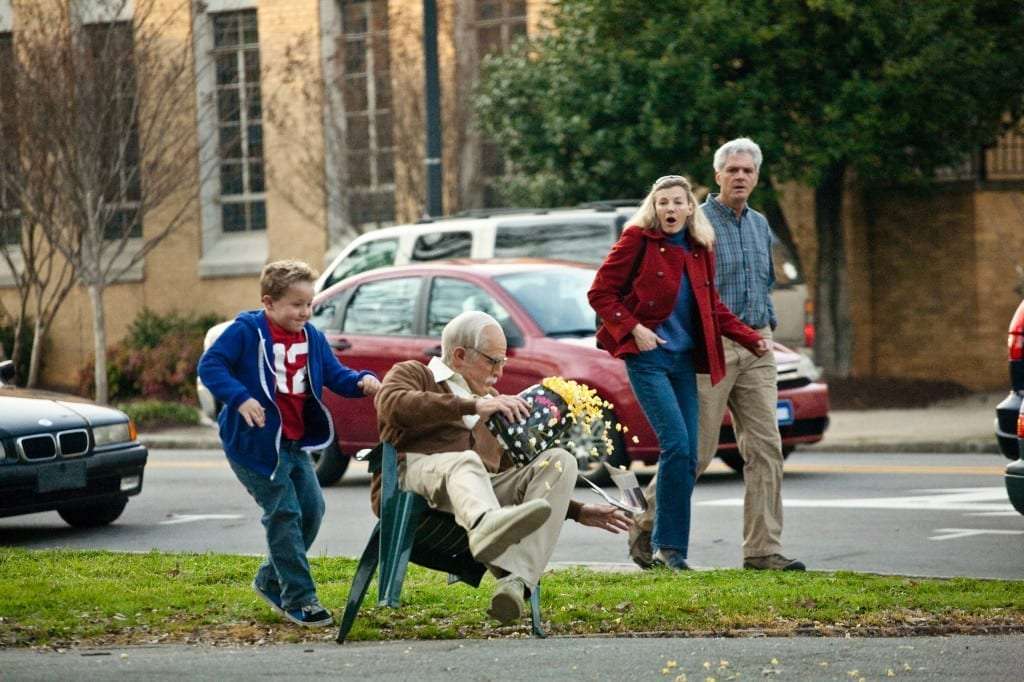