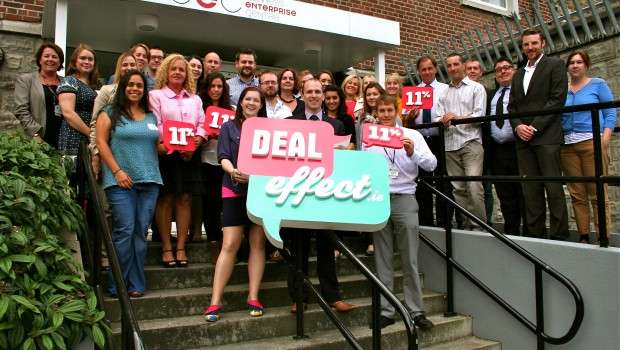 Dealeffect.ie officially launches: A deals website with a difference

An brand new daily deals website, DealEffect.ie, launched today with a target to raise over €2 million for non-profit Irish organisations within the next three years. DealEffect.ie was founded by thirty one charity organisations in an effort to find a new way to raise much needed funds for the sector. The site runs in a similar way to other deal websites with one massive difference – for every deal you purchase 11% of your transaction goes directly to your chosen charity.

DealEffect.ie is a daily deals site with charity at its core. Interestingly, Irish daily deals sites had revenues in excess of €54 million last year. If they all gave 11% to charity, a contribution of almost €6 million would be the result. With this in mind, the idea to form DealEffect.ie came from the charity sector itself, with thirty two non-profit organisations behind the investment to get the site up and running. Eleven of the founding charities attended the launch of the site. These included Arthritis Ireland, Focus Ireland, Downsyndrome Centre, The Wheel, MS Society, Epilepsy Ireland, Spirit Radio, Educate Together, ABI Ireland, Fighting Blindness and Sunbeam House.

Speaking today at the launch, Leonard Lloyd, CEO of DealEffect.ie, said: “I’m delighted to be at the helm of such an exciting start up. DealEffect.ie was the brainchild of the charity sector and the thirty two founding charities are the shareholders of the site. We believe that customers will love the exciting range of deals planned in coming months. The inclusion of an 11% donation to a customer’s chosen charity will be a compelling proposition to all those looking for a fun, easy and, above all, affordable way to donate to charity.

“It’s a true win win situation – the purchaser gets a great deal with up to 60% reduction for him/herself and 11% of that purchase goes directly to charity. DealEffect.ie’s objective is to raise over €2 million for Irish causes within the next three years – an ambitious target for an equally ambitious project. I’d encourage everyone to log on today and share news of DealEffect’s launch with your friends.”

In the past few years, the state of the Irish economy has meant that fundraising has been a challenge for non-profits. Though Irish people remain extremely generous by international standards, many have simply had less money to give away in the recession and its aftermath. DealEffect.ie solves that problem because it is offering deals at discounts greater than 50% of the recommended retail price. The contribution to the charity is already built in as 11% of that super-low cost – ensuring that philanthropy will now be within reach of an extremely wide number of people.

Deirdre Garvey, board member at DealEffect.ie and CEO of The Wheel, the representative body for community, voluntary and charitable organisations which worked with the 32 Irish charities to prepare DealEffect.ie for launch, said she was thrilled to be involved with the non-profit start-up. “There really is no substitute for the enthusiasm and energy associated with doing something completely new. DealEffect.ie is a brilliant way of raising much-needed funds for a wide range of non-profit organisations. People can do some good while getting a great bargain in the process – what could be better!”