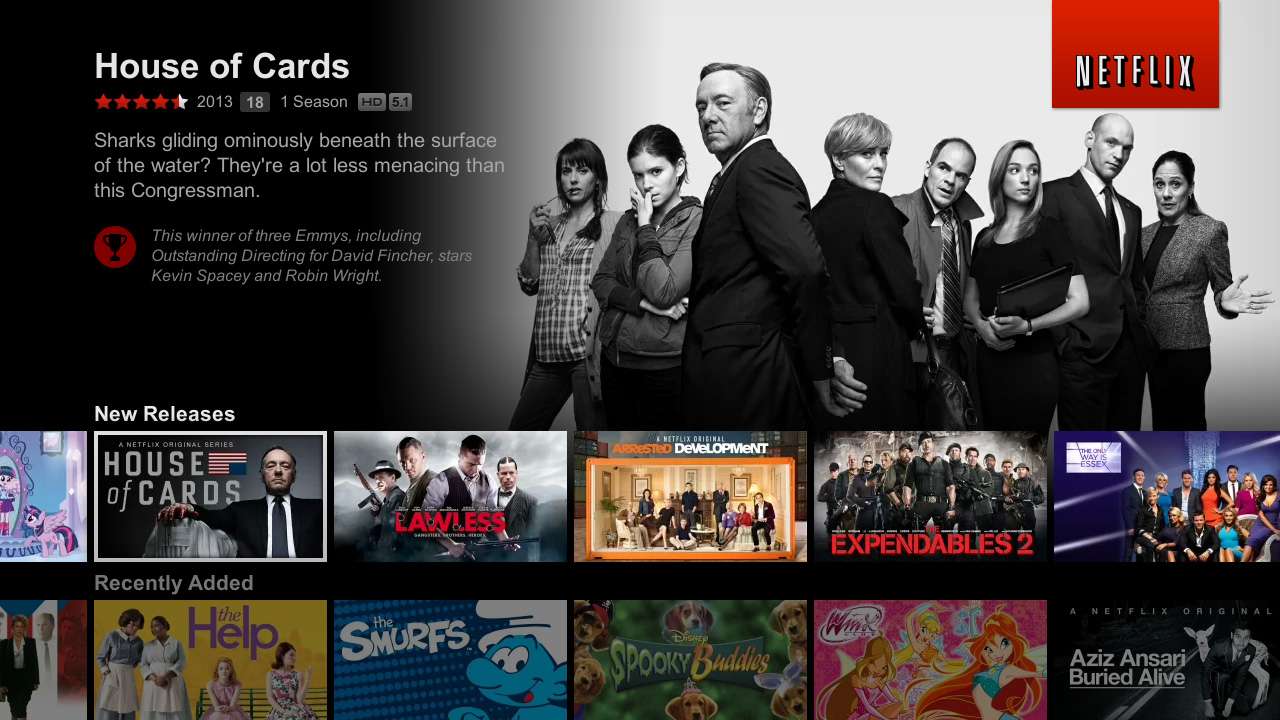 Well.. I dunno about you, but this is a cracking piece of news to me. Personally, I jump in between device to watch Netflix in different rooms, and it can be quite jarring moving from the likes of my Roku to the Xbox 360 and then onto the PS3 (which up until this announcement had the best, most attractive of all the Netflix interfaces). It’s also worth noting in the below press release that the Xbox One isn’t mentioned and the PlayStation 4 is… I’ll just leave that there shall I? 😛

This new interface looks SLICK! We’re working up our review of it at the moment, so be sure to check back soon and you know never know, there might even be a chance of getting some free Netflix :-O

Netflix today launched a radically new look that makes Netflix on TVs a much richer and more immersive experience.

The new design was created specifically for the big screen, featuring multiple cinematic images for each title along with a new, snappy description and more personalized detail on why Netflix suggests it. In a Netflix first, the new TV experience rolls out simultaneously across multiple devices that deliver Netflix to a TV screen, accounting for the majority of all Netflix viewing hours on televisions.

“Our members collectively watch more than a billion hours of Netflix a month, most of that is on a TV,” said Netflix Chief Product Officer Neil Hunt. “This is the biggest change to the Netflix experience on televisions in our history, making it even easier to find something great to watch on Netflix, bringing our members many more hours of Netflix enjoyment on their TVs.”

The new TV experience is delivered by a new Netflix software platform that runs efficiently on various devices, from low-powered set top boxes, recent model Smart TVs and Blu-ray players to high end game consoles. Previously each device had its own Netflix experience, which meant features took longer to roll out across devices.

“This new software platform will allow us to innovate even faster and continuously improve the Internet television experience for our members across multiple devices,” said Hunt.

The new Netflix television experience launches on Netflix on Nov. 13 and will be available to all members globally within two weeks. Devices that will support the new experience include PlayStation 3, PlayStation 4, Xbox 360, Roku 3, newer Smart TVs and recent Blu-ray players. Additional devices, including other Roku player models, will be added over the coming months.

General
– Netflix members watched more than five billion hours of Netflix in the third quarter of 2013. The majority of those hours was watched on televisions.

– Netflix has completely redesigned the Netflix experience on TVs to provide a compelling, more immersive experience on TV screens that further improves the discovery and playback experience for Netflix members.

– This is the biggest update of the Netflix experience on TVs in the company’s history.

–  Netflix has tested the update with several hundred thousand members in the U.S. (These were new to PlayStation 3 members who didn’t realize they were getting a new experience.) This test has demonstrated that the new design results in higher engagement: members watch more.

Design
– The main Netflix screen now provides three large, rotating images for each title to give more context on each title in the catalogue. Additionally, each title has a shorter, punchier synopsis.  Netflix also display personalized details such as whether friends have watched a particular title, how a title relates to a title you watched before or whether a title won awards.

– Individual title screens now have a broader synopsis and TV shows have an image for each episode along with an episode synopsis and a viewing progress bar.

– Search is now visual and predictive. After typing in just a letter, results for titles start to appear in a highly visual way. Actor and director search is also visual and available from the same screen.

– The kids section now has the same immersive, rich design and, for the first time, comes to devices such as Smart TVs, Blu-ray players and Roku.

– In a Netflix first, the new TV experience rolls out simultaneously across multiple devices that deliver Netflix to a TV screen, accounting for the majority of all Netflix TV viewing.

Technology
– Netflix engineers built a new software platform that runs efficiently on various devices, from low-powered set-top boxes, recent model Smart TVs and Blu-ray players to high end game consoles. Previously each device had its own Netflix experience, which meant that features took longer to roll out across devices (and sometimes features didn’t make it onto certain devices at all.)

– Roll out of the new experience starts on Nov. 13 and should reach all supported devices for all Netflix members globally within two weeks.