HMV today announced the launch of hmvdigital.ie, marking the first phase of HMV’s re-entry into digital entertainment since the company was acquired by Hilco Capital in April.

In addition, HMV’s new smartphone app is now live in the iOS and Google Play app stores. The innovative app, which is available free of charge for Apple and Android devices, allows users to shop, look and listen by combining image search and sound search technology with high quality MP3 downloads for the first time. 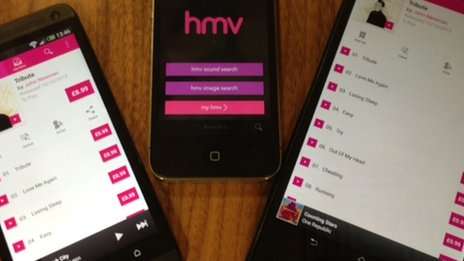 To mark the launch, hmvdigital.ie is giving away a selection of classic Christmas songs, with festive classics from artists including Frank Sinatra, Eartha Kitt, Dean Martin and Chuck Berry available as a free download. This week the site also has a special Boyzone feature page promoting the band’s latest album BZ20 alongside their back catalogue, as well as a featured Britney Spears page, supporting her Album of the Week.

Alongside the Album of the Week, hmvdigital.ie’s home page will also feature must have music, new and trending releases, and on tour sections, promoting artists currently touring live around Ireland. There will also be specific genre pages for rock, pop, dance, hip-hop, R&B, soundtracks, compilations and metal with featured releases.

Hmvdigital.ie offers users the opportunity to browse HMV’s digital catalogue and buy or pre-order MP3s. MP3 purchases are added to the user’s digital locker, and a Download Manager seamlessly integrates purchases into the user’s existing iTunes or Windows Media library on their PC or Mac. Tracks are available in high quality mp3 format in 320 kbs.

Image Search enables users to scan CD or album covers with their Apple or Android phone to access 30 second track previews and buy MP3 downloads. In HMV’s stores, Image Search provides a 21st century take on the music store listening booths of old. At home or on the move, users can scan album artwork on posters or adverts to preview and buy music.

Sound Search lets users discover the tunes they hear around them every day, whether it’s the music playing in store at HMV or at the track playing on the radio, and buy an MP3 download immediately or pick up a copy on CD or vinyl from their local HMV.

Commenting on the launch of hmvdigital.ie, James Coughlan, Managing Director of HMV Digital said: “”We’ve had an extremely positive response following the Android app launch back in October. Today we launch hmvdigital.ie and a mobile optimised store allowing music fans to preview and download high quality mp3s on multiple devices. Alongside, I’m pleased to say that iOS users in Ireland can now access the HMV image and sound search features everyone is talking about!”

Paul McGowan, CEO of HMV owners Hilco Capital added: “HMV’s position at the heart of entertainment retail demands that we enable customers to buy their music from HMV in the way that best suits them and to engage more closely with the music, video and gaming worlds.”

“Integrating a ‘listening post’ Image Search feature will enhance the shopping experience as music fans scan and sample albums in store over our newly-fitted high speed wifi before deciding to buy either the physical or digital product direct from HMV.”