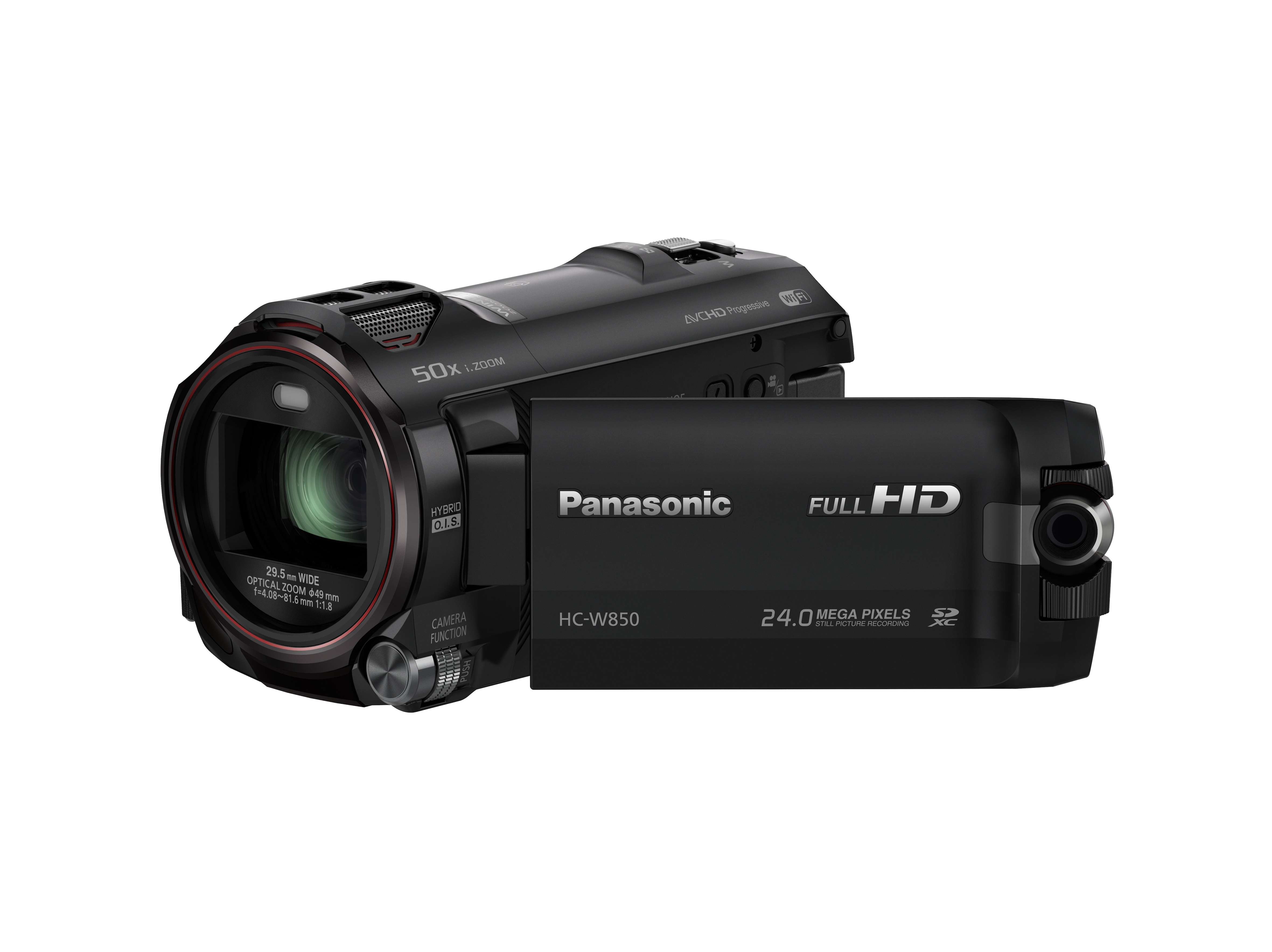 Panasonic have just revealed a brand new portfolio of five new high-image quality full-HD camcorders. Tailored to suit different users, the HC-W850, HC-V750, HC-V550, HC-V250 and HC-V150 all offer the HD image quality, portability and the ease of use Panasonic is renowned for.

The HC-W850 Features a Twin Camera

The key talking point of the flagship HC-W850 is its new Twin Camera™ function which enables users to capture two scenes at once, revolutionising the creative filming opportunities.  Made possible by the rotatable sub camera on the side of the LCD screen, users can shoot using this sub camera while also shooting with the main camera at the same time.  The video recorded by the sub camera appears in a small window on the screen. The Twin Camera enables users to simultaneously capture two scenes at once, such as a close-up shot and background shot in the same direction, and front and side shots. The Twin Camera can also capture shots of the subject and person filming, opening up the memories users can capture. For example, users can now simultaneously record their baby’s first steps, and record Mums’ reaction to the first steps. Priceless!

Picture Perfect Thanks to a New Lens, Sensor and Engine (W850 and V750)

Standing out from the crowd, the top of the range W850 and V750 feature an all-new lens, sensor and engine which combine for powerful zooming, high sensitivity and incredible image quality.  The engine is capable of processing at about 1.5 times faster than before for high-speed processing of the enhanced MOS sensor signals with 6.03 effective megapixels for delivering sharp video images with high resolution.  For the first time in a consumer video camera, a 4-drive lens system[1] is incorporated to enable a powerful 20x optical zoom within a compact body size.

Further adding to their creative credentials, the W850 and V750 camcorders can record slow motion video shooting in Full-HD with smooth playback at 240fps[2] with Intelligent Frame Creation.  A simple touch operation is used during regular shooting to switch to slow motion recording, making it effortlessly simple.

The effects of handshaking and titling are common problems when shooting video, but not with the new W850, V750 and V550.  The tilting correction range has been doubled for enhanced corrective performance. The setting can be adjusted to one of three levels (Off, Normal, Strong) based on the shooting conditions.  When shooting in situations where tilting tends to occur or for users who are unaccustomed to shooting, the Strong setting applies a wider correction range and stronger correction for recording a video that can be comfortably and easily viewed. The correction algorithm has been improved for better trackability and provides better tracking even when tilted quickly. Together with the 5-Axis Hybrid O.I.S+ optical image stabilizer, this provides powerful correction for camera shaking and tilting, resulting in picture perfect shots!

Perfect for those looking for an easy to operate model with extra portability, the slim size of the HC-V550 and HC-V250 belie their wealth of features and technical specification. Boasting an incredibly long 50x Optical zoom and 90x Intelligent zoom, these models can effortlessly bring faraway subjects up close. Intelligent zoom is a technology that uses super resolution technology for imaging at HD quality even when the optical range is exceeded. This function enables recognition of the subject features and improved clarity for shooting sharp close-ups of faraway subjects. Perfect for when users are separated from the subject by a considerable distance such as when shooting outdoor events.

The V550 and V250 differ by their image stabilization system – the V250 employs Panasonic’s Power O.I.S (Optical Image Sabiliser) for stable video images when zooming or walking, while the V550 goes one step further to feature the Advanced Level Shot Function and 5-Axis Hybrid O.I.S+ as seen in the high end V750 and W850 for minimizing the effects of hand shaking and tilting.  The V250 also incorporates a BSI Sensor for recording sharp images even in dimly-lit locations, enabling recording of sharp, high quality full HD video with minimum noise.

With built-in Wi-Fi and one-touch connection by NFC (Near Field Connection) these models are quick and easy to connect to a smartphone, allowing users to share their footage with those they love effortlessly.  Users can even provide live streaming of video using Ustream to deliver photos and videos as they are taken to faraway relatives and friends.

The entry level HC-V130 HD camcorder is the perfect model for those looking for an easy to use camcorder that will capture stunning video. Equipped with a 38x Optical Zoom and an impressive 75x Intelligent Zoom, the V130 has high magnification for bringing faraway subjects up close.

The new additions will also be able to utilize the optional new Remote Pan Tilt Cradle.  When connected to a camcorder, it detects a moving subject and automatically tracks the subject within a horizontal movement range of 180° and vertical range of 15°. If installed at a party, users can connect to the camera’s motion sensor to automatically capture the festive atmosphere. Also, if used together with the Wi-Fi Home Monitoring function, users can automatically track any pets that are left at home while they are out for monitoring them from a remote location. Perfect for keeping on eye on things when users are out, now they can really see what their pet gets up to when they go to work! The cradle will be sold as a bundle with the V550 and available to purchase separately for all models.