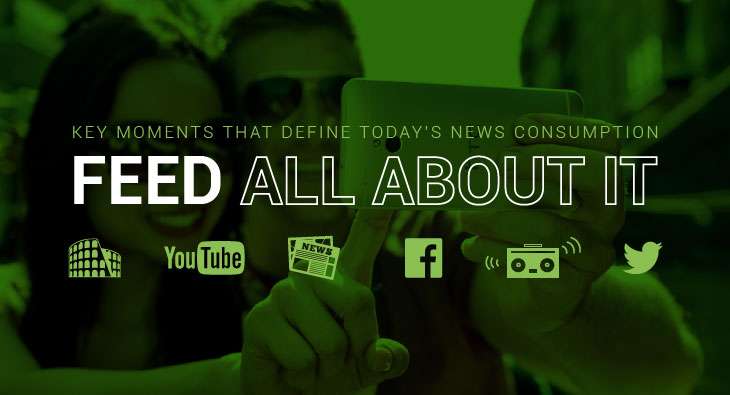 HTC has commissioned a global study into the behaviour around news consumption which reveals that we now live in a world consumed by news with figures showing that over half of us ‘information snack’ on a daily basis.

The research has revealed that this need to constantly access and consume news stories is resulting in a better informed society that has more rounded viewpoints. This statement is in stark contrast to the previous notion that social media is ‘dumbing us down’.

Have a look at the infographic for yourself and you can find the full press release below:

Dublin, Ireland, 20th March – A new global study into the behavior around news consumption has revealed that we now live in a world consumed by news, with over half of us (52%) “information snacking” on a daily basis.  The research, commissioned across ten markets by HTC, a world leader in smartphone innovation, has identified that this need to constantly access and consume bite-sized news stories is resulting in a better informed society that has more rounded viewpoints. This is in stark contrast to the notion that social media is dumbing us down.

The need for news

“I now read the news daily on my smartphone and being able to access it so quickly and easily, anytime, anywhere I go has made me much more interested in it.” – Female, 22, Australia

The impact of instant accessible news has led to a decline in online sharing, with only one in eight (13%) people sharing news stories through social media and just 14% “liking” news stories. In fact we’re more likely to share local news (30%) through social media, which is seen as less readily available, than health news (9%) or even celebrity news (4%), which are both considered much easier to access.

The future of news

With information snacking very much ingrained into our everyday lives, people are differentiating less and less between a traditional news story and a social media post.

This lack of differentiation towards sources of news, coupled with our constant need to be informed, is already impacting how we will consume news in the future. News will need to be even more social, tailored to personal interests and delivered along with other content such as weather updates, calendar reminders, or status updates.*  Aggregators such as HTC BlinkFeed, Facebook’s Paper app, The Huffington Post and Upworthy, will grow in popularity as the desire to stay on top of “news” in all its guises continues.

Yves Le Jan, Director of Content and Services at HTC, said, “At HTC we developed an innovative solution in HTC BlinkFeed, in response to the explosion of digital news sources. We wanted our customers to be able to keep up with the news from around the world, alongside their social networks, at a glance and in a way that was simple, accessible and easy to digest.

“We knew that delivering up-to-date content was vital to the creation of HTC BlinkFeed, so this study has confirmed what we already believe to be true – that bite-sized news with the choice to delve deeper into a story, is leading to a better informed global nation. This realization is why the aggregated news content available on our smartphones through HTC BlinkFeed is so important to us, and reinforces the HTC One’s position as one of the most critically acclaimed phones of 2013. Over the coming year we will be making even greater enhancements to HTC BlinkFeed, which will bring more social and news updates live to user’s home screens.”