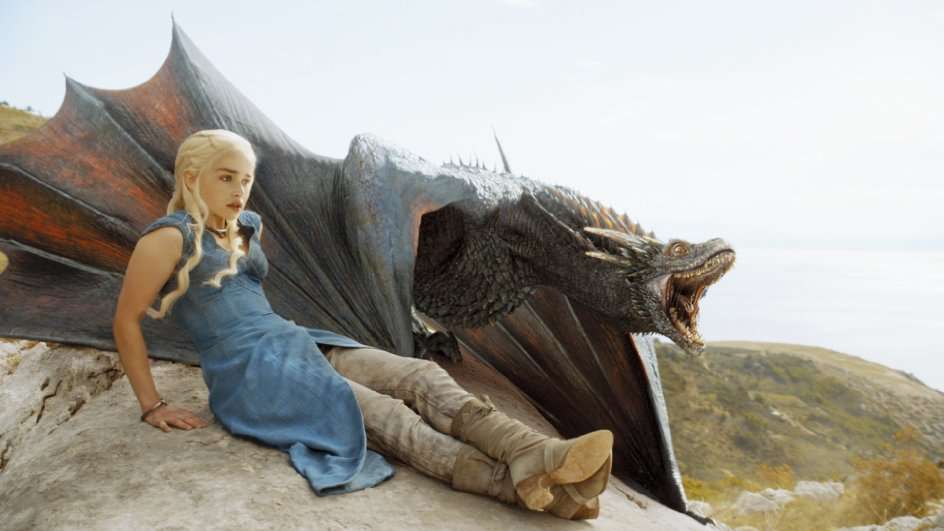 Game of Thrones has finally returned and if you haven’t watched the show yet, you’re seriously missing out on one of the best story-driven pieces of television of all time.

While many people say no to watching it because “I’m not into fantasy” or “Ugh, isn’t that the show with dragons and magic?” and these are quite frankly, rubbish excuses.

If you’re into well written stories and seeing them portrayed beautifully on screen, look no further than Game of Thrones, which is at least on the par with if not better than Breaking Bad.

Each week I’ll do a quick recap of the previous episode, which means there will be spoilers for every episode up to this point – if you’re just catching up on Season one, two or three, turn back now.

If you haven’t read the books, A. you should as they’re amazing and B. I’ll try to flesh out a bit of backstory regarding things that you may not know having just watched the show.

In the season premiere we seen a lot of stories taken on, and it’s rare for the show to start the show cold, as in a scene before the title credits.
Tywin Lannister is seen melting down Ned Stark’s great sword, Ice and forging two new Valyrian steel blades, one of Jaime and one for somebody else.

Valyrian steel is extremely strong and valuable and can’t be made anymore as Valyria is gone, and Tywin has wanted a Valyrian steel blade in the Lannister family ever since they lost their own one, Brightroar. 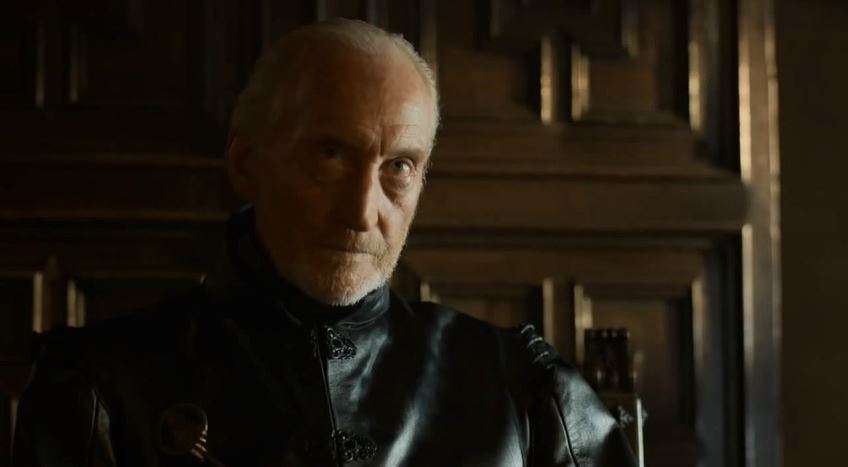 The introduction of Prince Oberyn Martell of Dorne is very important to the story and thankfully Oberyn himself explains to Tyrion the backstory and significance of his arrival. He makes it very clear that he’s out for revenge with the coolly-delivered line: “The Lannisters aren’t the only ones who pay their debts.”

Oberyn’s sister Elia Martell was married to Rhaegar Targaryen (Daenerys’ older brother) who left her for Ned Stark’s sister Lyanna, whom Robert Baratheon was supposed to marry.
This led to the War of the Usurper or Robert’s Rebellion (depending on which side you’re on) which resulted in Robert taking the Iron Throne after Tywin Lannister stormed Kings Landing and sacked the city.
During the sack of Kings Landing however, Gregor Clegane aka The Mountain raped and murdered Elia Martell before killing her son Aegon Targaryen while another of Tywin’s bannermen, Ser Amory Lorch killed Elia’s daughter, Princess Rhaenys.

So it’s clear to see why Oberyn really, really hates the Lannisters. 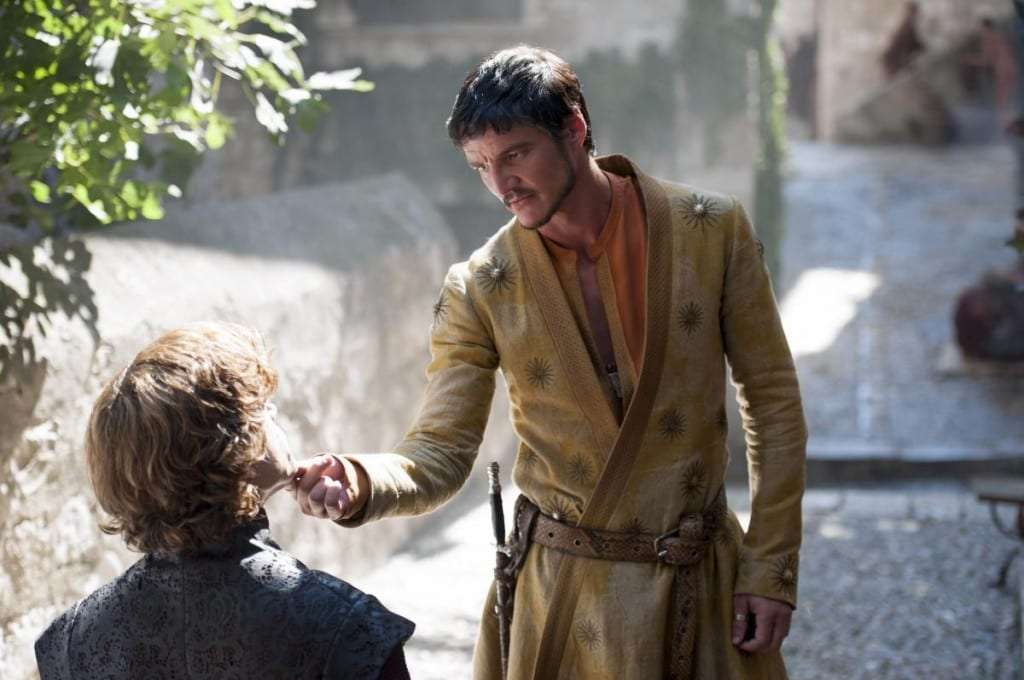 Pedro Pascal as Prince Oberyn in Game of Thrones. via HBO.

Oberyn is played perfectly by Chilean actor Pedro Pascal who captures the Red Viper’s do whatever he wants attitude and love of life (including his love for both men and women).

Sansa seems to be taking a new turn in her life by refusing her favourite food, lemon cakes and delivers a powerful little speech to Tyrion about her mother Catelyn and Brother King Robb whom were both murdered by Walder Frey at the Red Wedding in Season three.

Her emotion reflects how most of us feel about the Red Wedding well and she also acquires a rather nice necklace from Ser Dontos, the drunken knight she saved from certain death back in Season two.

Shae on the other hand is as annoying as always, and there’s not much to look into there, other than the handmaiden who was sneaking around outside Tyrion’s room and heard them yelling, she ran straight to Cersei to (presumably) tell her about Tyrion and Shae’s affair.

Cersei also does a good job of bringing us back to speed on some stuff that might be a bit hazy – Jaime fighting Ned Stark in Kings Landing, King Robert being killed, her daughter being sent to Dorne, her son marrying Margery Tyrell whom Cersei doesn’t trust and the siege of King’s Landing.

Jaime says: “I murdered people so I can be here with you” to which Cersei responds with “You took too long”, proving once more that she can never be pleased. 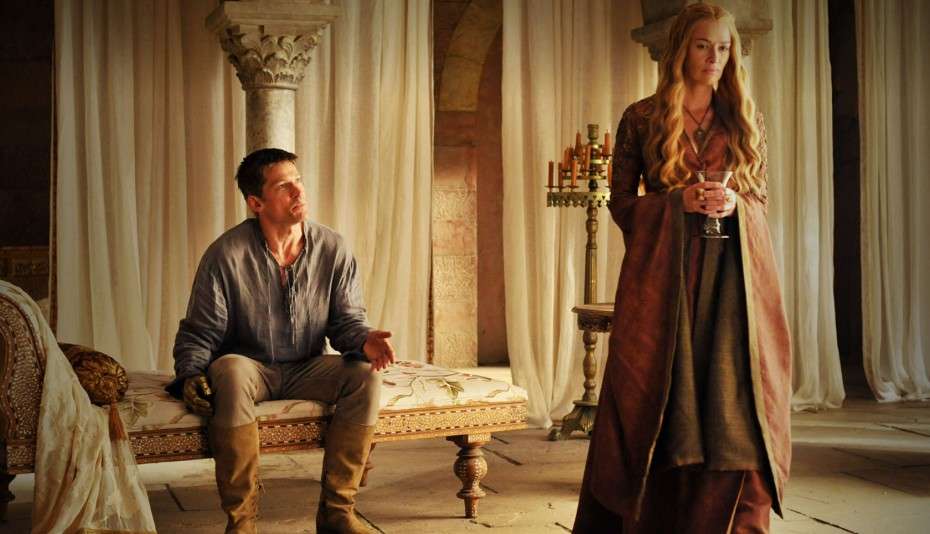 Nikolaj Coster-Waldau as Jaime Lannister and Lena Headey as Cersei Lannister in Game of Thrones. Via HBO.

Jaime also has a humorous, good cop/bad cop scene with the amazing Brienne of Tarth about what to do with Sansa – Jaime says she’s safe in King’s Landing, Brienne disagrees. I think at this stage, nowhere in Westeros is truly safe for anyone, but Brienne has a better argument here.

Across the Narrow Sea we see Daenerys frolicking with her dragons, and of course it’s obvious that she’s losing control of them as they get older.

We’re introduced to the new Daario Naharis, who doesn’t make much of an impression really, and I found myself liking Grey Worm more than him, much like in season three. We also see the dead children who line the road to Meereen, a sign from the masters of Meereen that Daenerys is not welcome.

The story up north could be a show all on its own, with the wildlings preparing to attack the wall from both the north and south while Jon Snow is on trial for breaking his oaths.

We see Tormund Giantsbane speak to Ygritte about her purposely not killing Jon Snow when she filled him with arrows, and we’re introduced to the Thenns, a different and scarier clan of Wildlings. Cannibalism was mentioned in the books but I don’t recall the Thenns being specifically accused of it, either way it’s clear in the show that they enjoy the taste of human.

The Thenns also traditionally wear armour and are more disciplined in the books, making them a more dangerous force to be reckoned with. It’s not clear how they got south of the Wall but Osha and her band of wildlings who attacked Bran outside Winterfell show that smaller groups find a way. 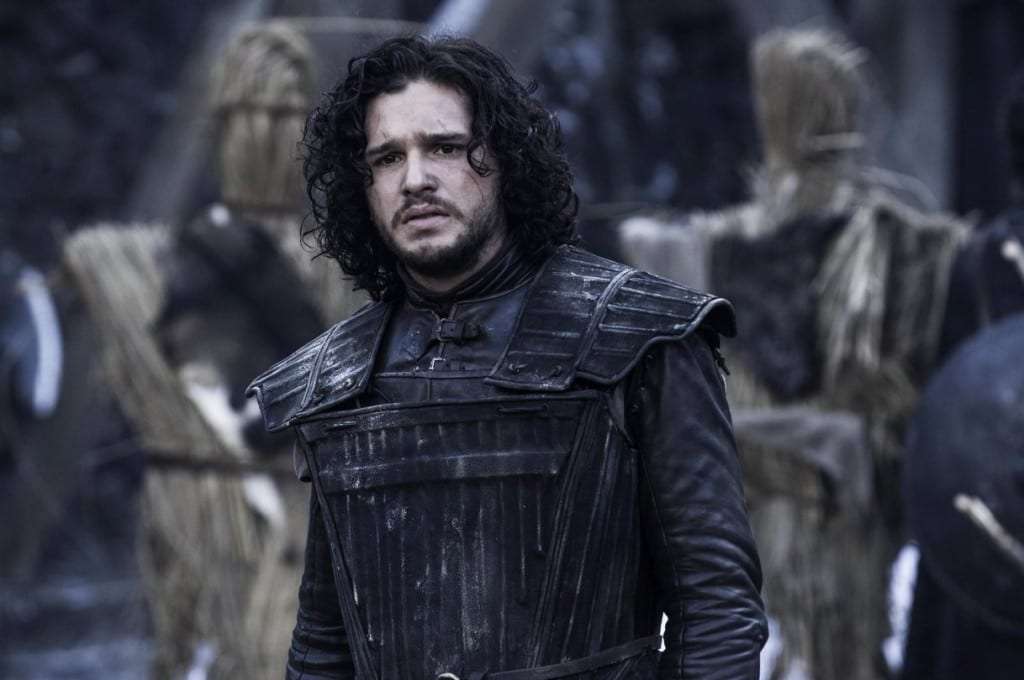 Kit Harrington as Jon Snow in Game of Thrones. Via HBO.

Jon has a nice jab at Janos Slynt, the former head of the Gold Cloaks (City Watch) in Kings Landing, which is great considering Slynt was involved with betraying his father, Ned Stark.

The acting commander of the Nights Watch Alliser Thorne makes no secrets about his hatred for Jon Snow and would have most certainly have Snow executed only for Maester Aemon Targaryen tells him he can go, saying that if they beheaded every members of the Nights Watch who had sex with women, the Wall would be manned by headless bodies.

The place called Molestown he mentions is a small town just south of Castle Black which is made up of kind of burrow houses, hence the name Molestown. Many Nights Watch brothers sneak there at night to the brothel.

Last but by no means least we have the amazing showdown the inn between Arya and the Hound and Polliver with his gang of outlaws (he prefers to go by Kings Men which says a lot about Joffrey’s rule).

In the books, the Tickler dies here along with Polliver, but in the show, the Tickler was killed in Harrenhall by Jaquen on the orders of Arya.
It makes little difference though as they’re both psychopaths who love to torture, kill and rape and Arya has reason to want them both dead anyway. 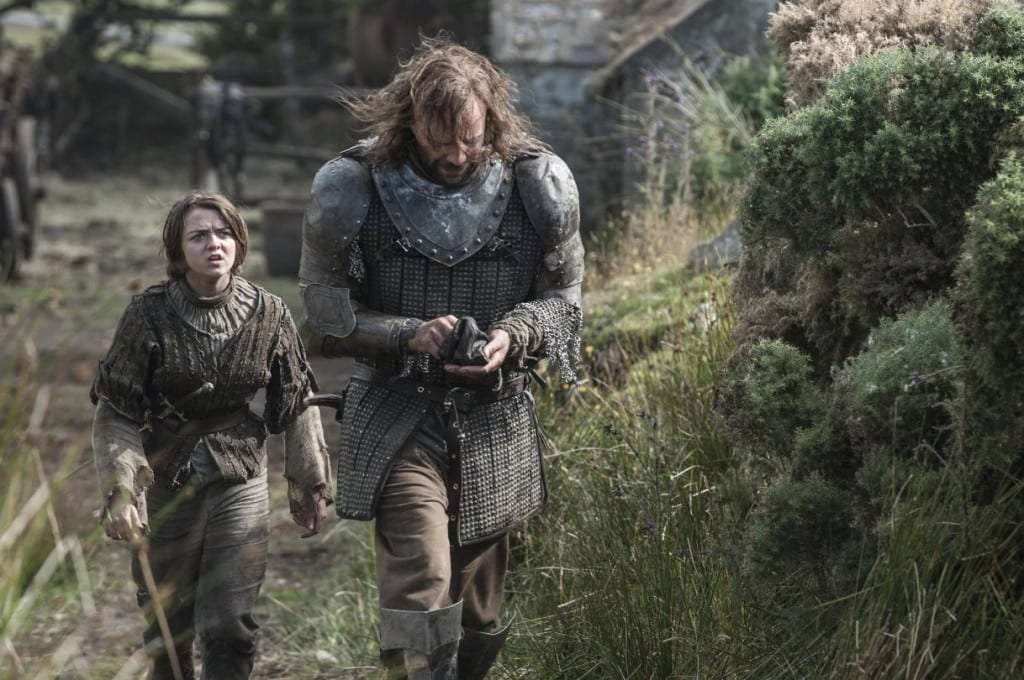 Maisie Williams as Arya Stark and Rory McCann as Sandor Clegane in Game of Thrones. Via HBO.

The tension can be felt in the air as soon as Arya and the Hound enter the inn and climbs until breaking point. I absolutely love the Hound in the show, he’s developed to be a much more complex and likeable character, a testament to Rory McCann.

Once the battle kicks off the action is as gory and satisfying as we’ve come to expect in the show, with Arya showing her true darker side as she kills Polliver while repeating what he said to her friend Lommy, even though it was another character called Rafford who kills Lommy in the books.

Of course worthy to note is Arya killing Polliver with her sword Needle, which was given to her by her half-brother Jon in season one – “Stick ’em with the pointy end.”

We’ve probably seen the biggest turnaround in Arya more than any other character in the show, from a mischievous tomboy in Winterfell to a tough girl who’s gone through a lot and as far as she knows, lost her entire family and finally to a killer – Maisie Williams is so, so good.

Overall the first episode has done a great job of staying true to the books as in previous seasons, while introducing a lot of new characters and plot lines and keeping older ones fresh.

Worth noting that the episodes’ title ‘Two Swords’ may refer to the following:

There’s a lot more to come in the next nine weeks, stay tuned for more recaps here.