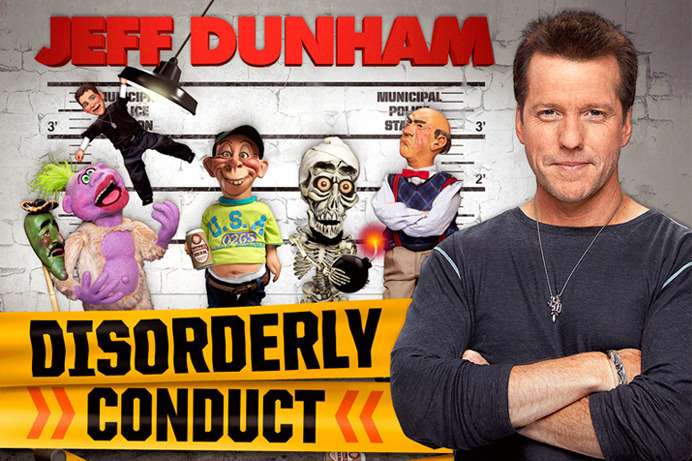 Competition: Win Two Tickets to see Jeff Dunham with his “Disorderly Conduct” Tour at the O2

** We’ve contacted the winner by email and thanks to all who entered. Watch this space as we have more competitions coming soon **

Top US funny man, ventriloquist and hilarious stand-up comedian Jeff Dunham is coming to Dublin next week and bringing his hilarious cast of characters with him as part of his Disorderly Conduct Tour.

Most of you will know Jeff Dunham’s famed troupe of sidekicks already for those who need a refresher: you’ve got Walter the Grumpy Retiree, Achmed the Dead Terrorist, the beer-fueled redneck Bubba J, the manic purple creature Peanut, the spicy pepper from south of the border José Jalapeño, and Peanut’s own ventriloquist dummy Little Jeff, a mini-version of the ringmaster himself. They may have all been conceived and hand crafted by Dunham, but his characters, who are anything but dummies, have now taken on a life of their own, each with their own legion of fans.

In case you’re still waving on whether you should go see Jeff, note that the US leg of the Disorderly Conduct Tour, was sold out on the first day it went on sale, with Dunham performing to nearly 400,000 people across the country. He also has taken his brand global, extensively traveling the world for the past six years. Dunham’s latest stand-up special, the horror-themed Minding The Monsters, was released on DVD on 9 October and has reached triple-platinum status. His three Comedy Central specials remain among the network’s five most-watched programs of all time, with the 2008 A Very Special Christmas Special drawing 6.6 million viewers. In films, Dunham will be featured in next year’s Open Road animated release Nut Jo.

Still, can’t remember if you’ve seen Jeff or not? Well, check out his shows on Netflix…

Jeff Dunham – Spark of Insanity
Ventriloquist Jeff Dunham introduces dummies Achmed the Dead Terrorist and Melvin and Superhero to his cast of funny favourites in this 2007 special.

Jeff Dunham – Minding The Monsters
Jeff Dunham returns with a haunted house full of his hysterical entourage, and each character stars in its own horror movie trailer (2012)