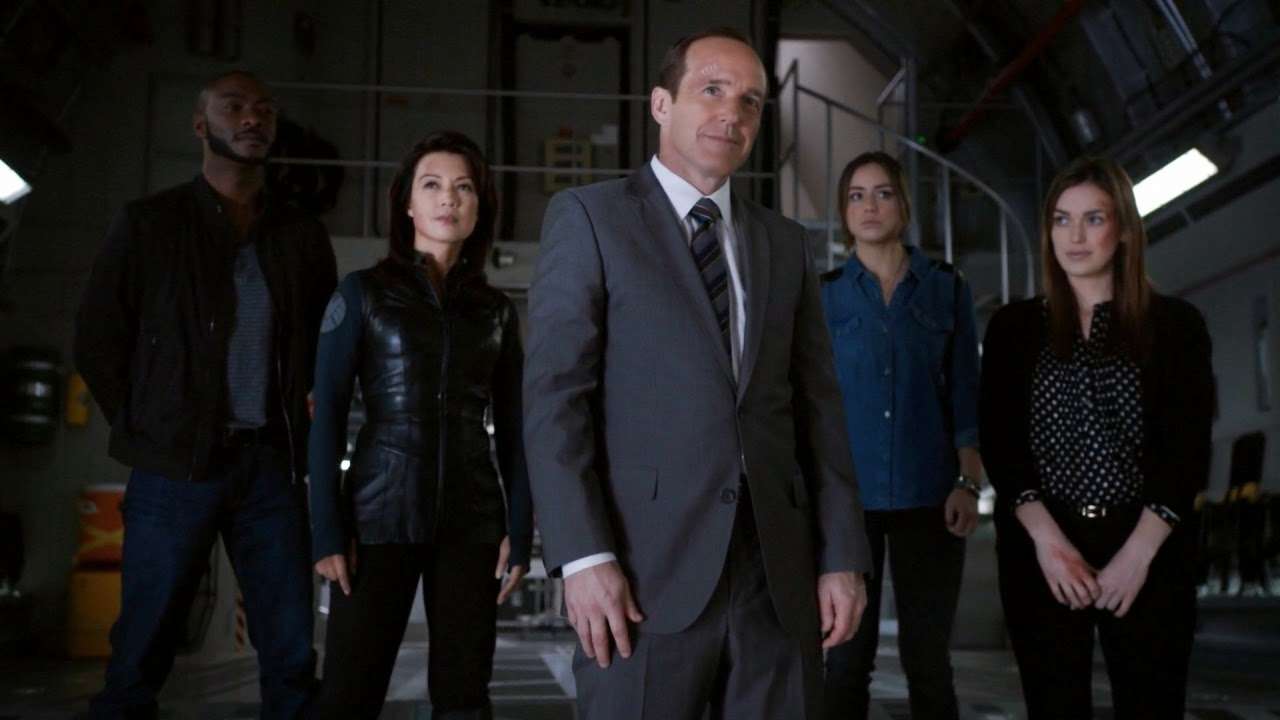 Marvel’s Agents of SHIELD: “Beginning of the End” Review

Marvel’s Agents of SHIELD: This is the beginning…

We hope you enjoyed watching the episode on RTÉ Two HD tonight. Now that the first season is over there are full SPOILERS below in this review.

The season one finale of Marvel’s Agents of SHIELD came to a thrilling end with the final episode of the series with “Beginning of the End”. The episode was packed with a large number of plot elements, a guest appearance, strong fight sequences, some great character moments and of course set-ups, for the now confirmed season two of the show. In some ways there may have been just a little too many things to pack in to this episode and a longer finale could have helped all the different components of the episode and season breath. Yet the episode expertly delivers the action, sentiment, comedy and drama to wrap up the story arcs of season one and establish some interesting and exciting prospects for season two.

With Agent John Garrett (Bill Paxton) on board the “bus” with slimy industrialist Ian Quinn (David Conrad) and Raina (Irish Actress Ruth Nagga) and the destruction of SHIELD still fresh for Agent Coulson (Clark Gregg) and his team, they look for payback. Coulson, Skye, May and Triplett (B.J. Britt) track and pursue all aboard to put a stop to them and their unknown plans for the Gravitonium recovered from the Fridge.

On the plane, with the miracle drug GH.325 coursing through his veins, Garrett reveals to Raina in a final nod to the series phrase “Everything is connected”, that he can see the past, present and future of the universe and can now write the familiar hieroglyphic script as seen in episode 4 “Eye Spy”. This alien script resonates towards the end of the episode and may also resonate further in to the future with the Marvel Cinematic Universe. Garret also reveals to Raina his (and Agent Ward’s) less than fanatical allegiance to HYDRA and his personal plan to hijack the Deathlok project from Quinn and the US military for his own personal ends. 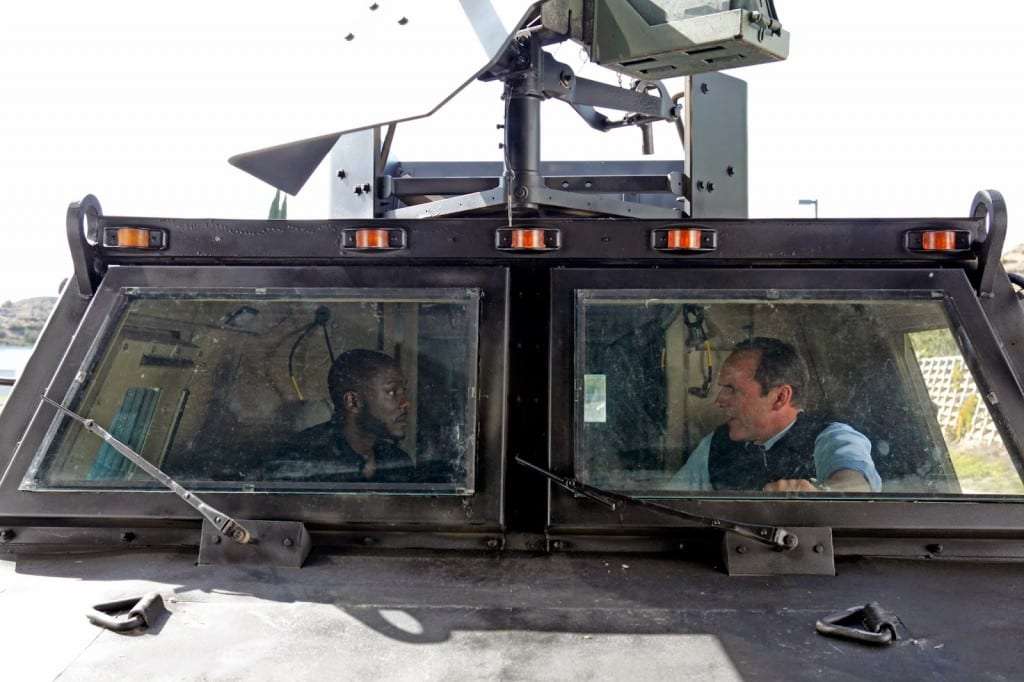 When Coulson and his team finally catch-up with Garrett, Quinn, Raina and Agent Ward (Brett Dalton) at the Cybertek facility we are exposed to some interesting connections between on the face of it opposing characters: For Skye and Ward this is the unknown darkness that lies within as Raina says “…maybe you two could be monsters together”; for Coulson and Garrett it is their shared experience of the GH.325 serum and what that has revealed, as Garret says “You haven’t seen the big picture, the big bang, but Phil here has“.

With the betrayal of the team by Ward still fresh in everyone’s minds and his personal betrayals of Melinda May (Ming-Na Wen) and Skye (Chloe Bennet) it can only be said that Ward is in for trouble. Serious trouble. The disintegrating love triangle that was Skye-Ward-May is resolved with some excellent dialogue between Skye and Ward and is followed by a great fight sequence between May and Ward. Both ladies get their punches in, both figuratively and literally. Indeed, the punch up between Ward and May is the most brutal form of payback and is a sustained piece of action and violence where a woman does outwit and get the better of her male adversary. It also comes with some classic one liners. The portrayal of Ward throughout this episode alludes to the potential for Ward to be redeemed of his crimes and betrayal with the group; however, I hope that evil Ward hangs around and becomes a counter-point to his former team members. This for me would be more interesting than a redemption story.

Meanwhile, jettisoned from the plane in an escape pod by Ward, with the intention to kill Agents Fitz (Iain De Caestecker) and Simmons (Elizabeth Henstridge), one of the most intimate and emotional parts of the episode revolve around these tech-savvy engineer and biochemist, respectively, who throughout the series have had a shy awkwardness between them and generally the focus of the lighter, funnier moments of the show. The levity and awkwardness between these two excellent characters is poignantly removed in an exchange between them whilst seemingly trapped in an escape pod at the bottom of the ocean. Facing the prospect of death Jemma Simmons says to Fitz “You’re my best friend in the world!” to which he replies “Yeah, and you’re more than that, Jemma. I couldn’t find the courage to tell you.” This scene between the two is very tender and is made more powerful by how they have been set-up during the other episodes of the series. It ultimately provides the episode’s most touching and compassionate moment, especially given the assumed critical state of Agent Fitz’s health.

Wipe those tears away and prepare for the guest appearance…enter former Director of SHIELD Nick Fury (Samuel L. Jackson) in an awesome cameo that is at once self-indulgent and very convenient, yet perfectly pitched, symbolic and significant for the rest of the episode (and season two). Samuel L. Jackson is sublime and compelling in his portrayal of Nick Fury. The interplay between him and Clark Gregg is great, with quips passing back-and-forth between them. The presence of Nick Fury adds importance to the developments that he brings to the story, especially those involving Agent Coulson, where notably he adds cinematic importance to Clark Gregg’s character. The presence of Nick Fury, and Phil Coulson’s signature weapon from the Avengers, also serves to further facilitate integration of the TV show in to the Marvel Cinematic Universe and possible tie-ins with future films like Guardians of the Galaxy and the Avengers: Age of Ultron that bookend the second series of Agent’s of SHIELD. You can check out some of these connections between Captain America The Winter Soldier and Agents of SHIELD in our previous article here. 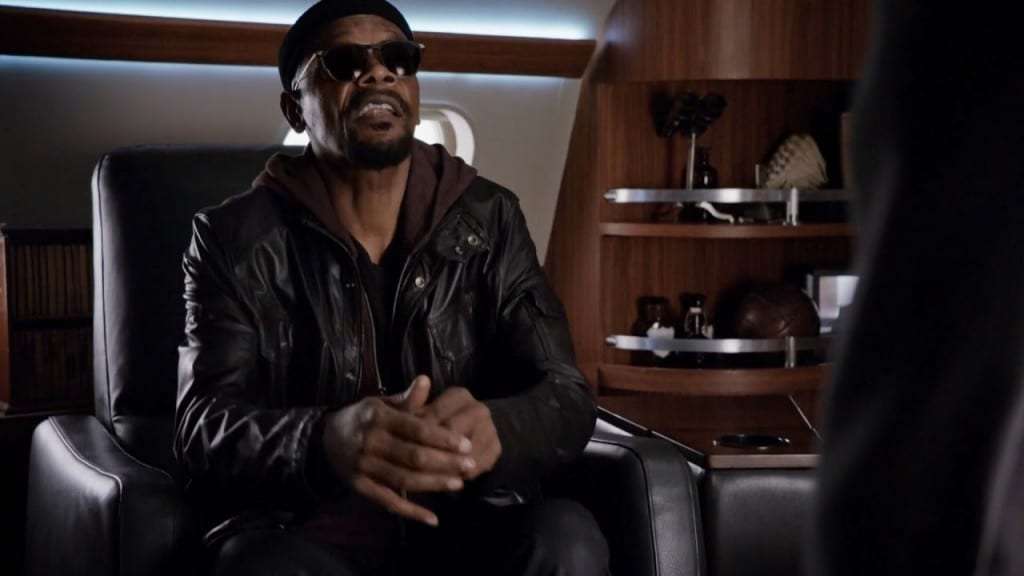 The action at Cybertek concludes with the redemption of Deathlok (J. August Richards) as he is released from the company’s “Incentive” programme to take revenge on his captor Garrett with a nicely placed missile and a heart-felt stomp to the head. However, just as we think Garrett is finished, being shipped off in a body bag, that GH.325 drug has some serious regenerating properties and he returns to complete his personal journey and become a new Deathlok. But as with his vile and prophetic rhetoric throughout the episode, and in a moment of great levity, Garrett is undercut again this time by Coulson as he uses Tesseract-tech to well and truly finish of this villain…disintegration there is no coming back from that! That’s it, Garrett. “Game over, man! Game over!” 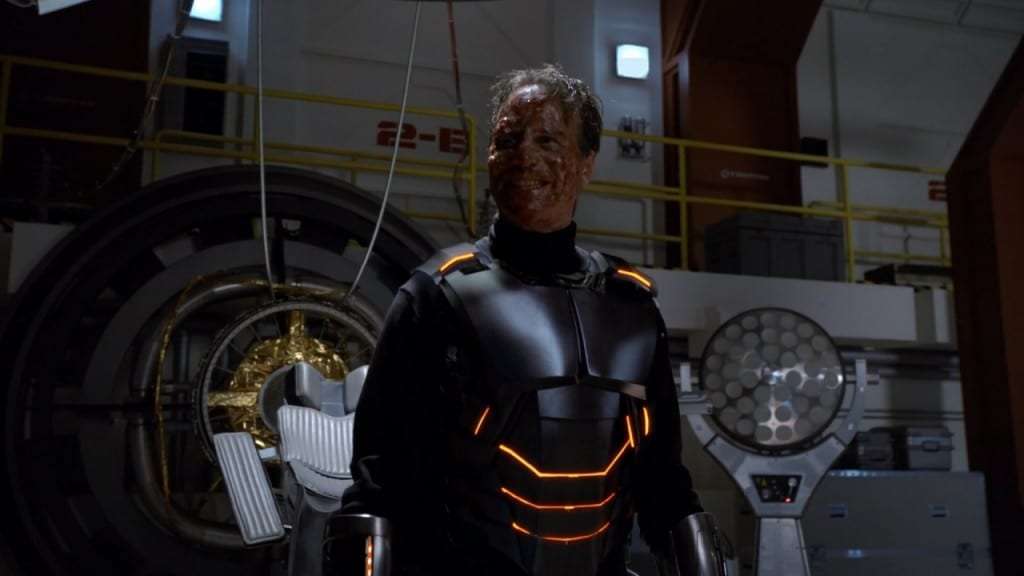 The episode and the season closes with a sequence of excellent little intriguing set-ups for season 2. In an emblematic and, in all honesty, momentous gesture Fury hands “the toolbox” of SHIELD to Director Coulson. That’s right Coulson is the Director of SHIELD because he is trusted and best embodies all of SHIELD’s finer qualities – the protection of individuals and mankind. Patton Oswald appears to return from the dead at another of Fury’s old bases to greet Coulson and his team – Although he announces that he’s Agent Billy Koenig brother to the dead Eric from Providence, but do we finally have Life Model Decoys or LMDs in the Marvel Cinematic Universe? I hope so!

A more sinister set-up is also revealed as Raina holds up a photo of Skye to an unidentified person sitting down with blood dripping from their hand and whispers in their ear “I found your daughter”. Not only does this deepen the mystery of Skye, who she really is and where does she come from, but it also deepens the enigma that is Raina – The Girl In The Flower Dress. For both ladies this will hopefully drive some interesting character arcs for next season. Finally, hinted at by an exchange earlier in the episode between crazy Garrett and Coulson, the episode and season closes with Coulson on his own in his new base scribing the same puzzling images and unusual script on to the wall…as Garrett said to Coulson “We share a bond. We’re blood brothers“.

The episode “Beginning of the End” is a great finale to the first season of Agents of SHIELD. It nicely resolves a number of story and character questions raised during the season. The interplay between the characters, amongst other components of the episode, is the best aspect of this episode. Part of reason why this works is because of how well these characters have been formed throughout the entire season. This especially works best for the moving scenes between Simmons and Fitz where all the previous lightness of these characters switches to something more serious and deep because of the hopelessness of the situation that they are placed in. The thirty-minute or so “cameo” of Nick Fury in the episode rewards viewers for watching this wonderful series and it has real meaning for future story arcs of Agents of SHIELD and possibly even the wider Marvel cinematic universe. This episode, and the season, can be encapsulated in the slogan “Everything is connected” and indeed they provide threads to the second season of the show in a number of teasing scenes and comments. For me I am genuinely eager to see the effects of the GH.325 serum, the miracle drug, on Agent Coulson and the connection to the alien-looking script and the connection of this script to the origins of Skye. My interest in the development of Raina and her role in what will come is huge. In my view The Girl In The Flower Dress is über classy and one of the true enigmas to be teased out in season two. Episode 22, “Beginning of the End”, is a great end to season one and an intriguing beginning to season two of Agents of SHIELD.

Agents of S.H.I.E.L.D., starring Clark Gregg, Chloe Bennet and Ming-Na Wen, is confirmed to return in Autumn 2014 on Channel 4 and hopefully RTÉ Two HD as well.