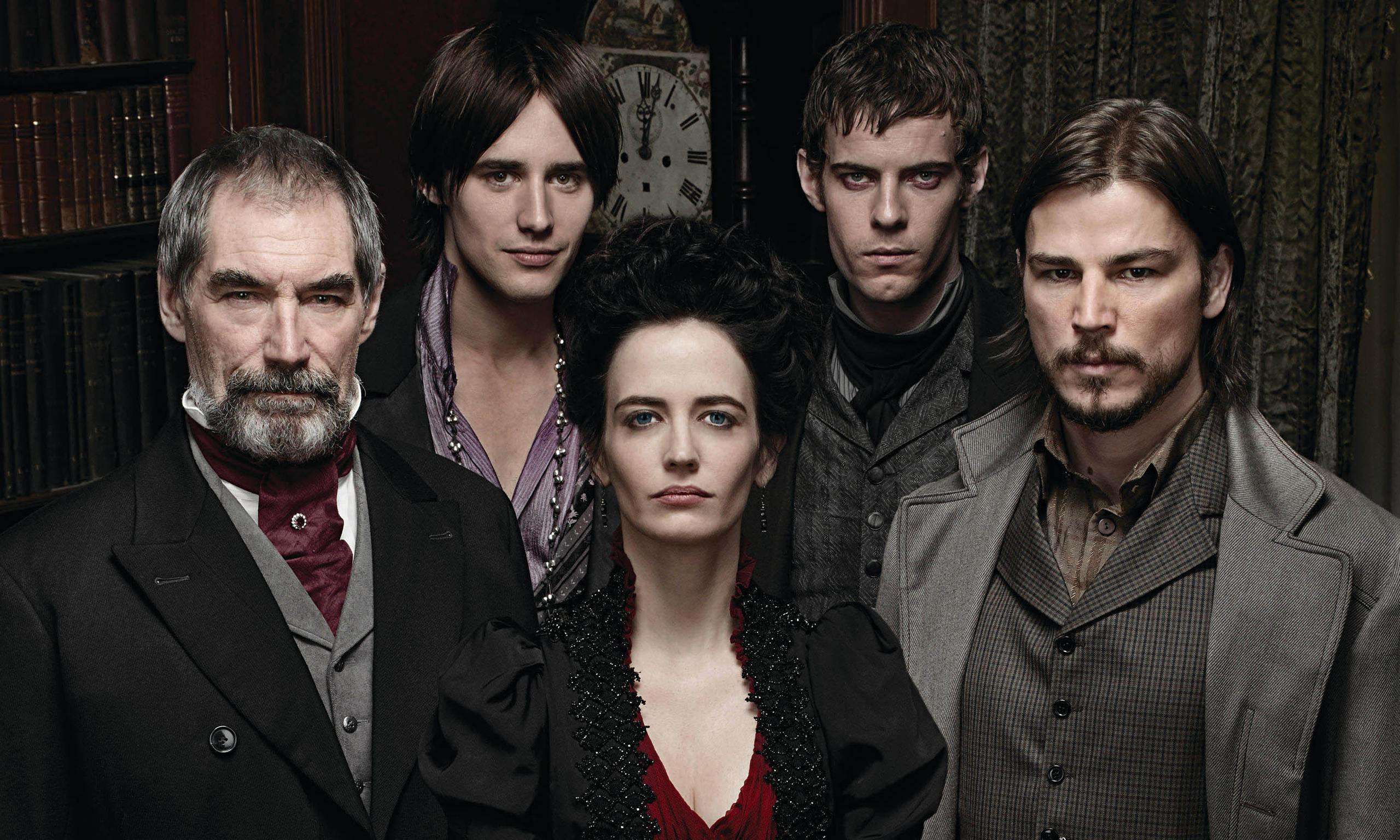 Penny Dreadful is most definitely for those who like their horror from the pens of Bram Stoker, Robert Louis Stevenson, Oscar Wilde and Mary Shelly, as the series title is taken from a type of fiction publication in 19th Century Britain that featured lurid serial stories and was also known as Penny Horrible and Penny Blood. Penny Dreadful from its opening scene, with the ripper-like abduction and murder of a mother and her daughter, it celebrates its horror storytelling providing a lot of tense moments and gruesome scenes throughout the first half of season one. It revels in the gas lamp era of Victorian London which provides the Gothic and eerie backdrop to Penny Dreadful and despite the period setting there is very much a contemporary feel to both the characters and themes of this series. 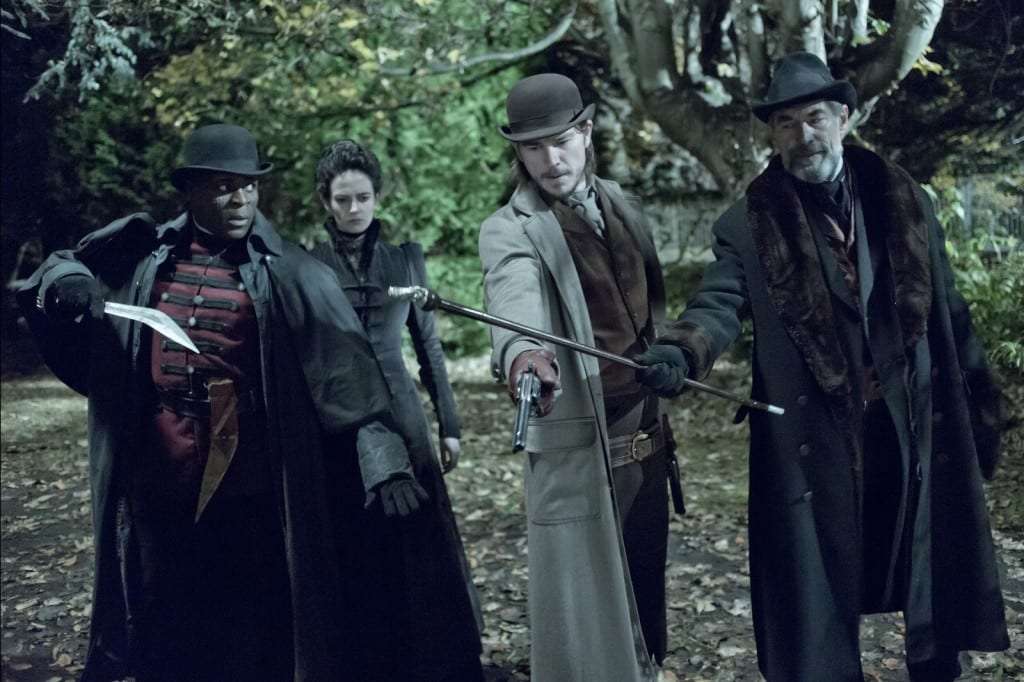 Episode one “Night Work” introduces us to our three central characters. Ethan Chandler (Josh Hartnett) an American gunslinger is hired as protection for an unknown night-time expedition in London after meeting spiritualist, medium and Tarot-reader Vanessa Ives (Eva Green). The purpose of this errand is revealed through Sir Malcolm Murray (Timothy Dalton) a gentleman explorer with a single objective that revolves around the mystery of his missing daughter Mina Harker (Olivia  Llewellyn). Ethan’s association with Sir Malcolm and Ms. Ives introduces him to the dark underbelly of London and a world that he never knew existed. The loose affiliations of these main protagonists is excellent and it immediately sets ambiguity amongst these well crafted characters. The motives of the partnership and its individuals are at once blurred providing intrigue in each persons intent. 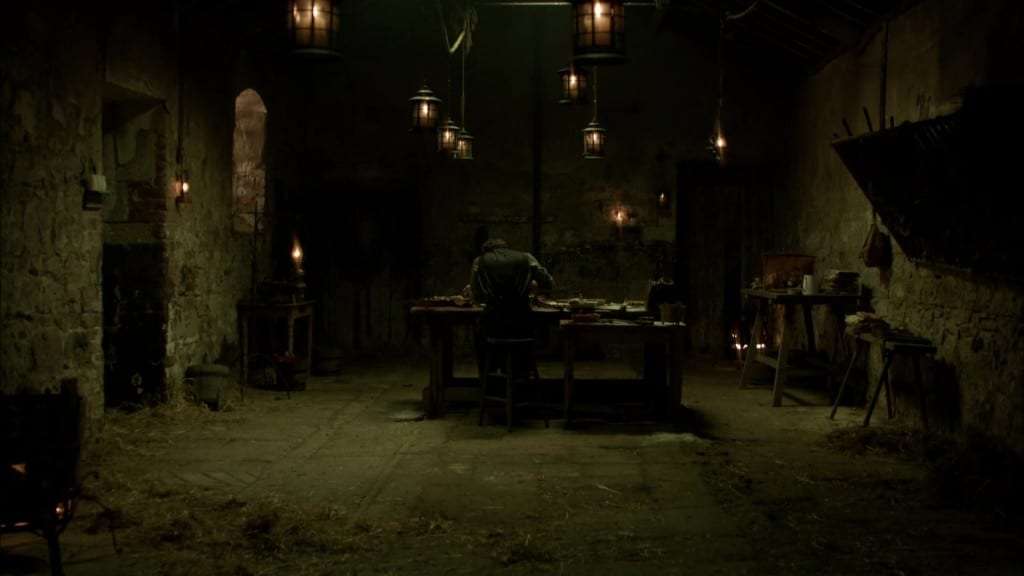 In the search for answers to the abduction of Sir Malcolm’s daughter they find a nest of vampire-like creatures thought responsible and this becomes the main story thread through the first four episodes of season one. The creature is killed but it is soon realised that it does not have Sir Malcolm’s daughter and there are more of these hidden creatures in the city! In episode two “Séance“, hieroglyphics, under the skin of the dead monster, from the Egyptian book of the dead reveal more disturbing and dangerous plans to conjoin two ancient Gods Amunet and Amun-Ra in a spell that will tell the annihilation of man. The script also hints at other dangers for one member of the company, as the Egyptologist Ferdinand Lyle (Simon Russell Beale) warns “…who wants to know they are being hunted by the devil“.

Darker connections unravel at the séance as Vanessa’s ability to commune with the spirit world leads to her possession by evil spirits. In a great performance by a convulsing Eva Green, who is genuinely shocking, the spiritual narrative divulges aspects of Sir Malcolm’s past such as the death of his son and the relationship he had with his daughter ultimately ending with the cries for help from Mina being channelled through Vanessa.

As the search intensifies, so the mystery gets deeper and the part played by Mina becomes more dubious. Her communication from the demi-monde through Vanessa to her father becomes more uncertain and leads them to London Zoo where events result in the capture of a Mr Fenton. Ultimately, the brutal interrogation of Fenton by Sir Malcolm, in episode 3 “Resurrection“, raises suspicion that the group are being  exploited for a higher purpose and prize, that of Ms. Vanessa Ives. This revelation suggests that Mina is beyond help and may actually be manipulating Vanessa to aid the plans of the dark vampire-like creature. This trick is brought sharply in to focus as Fenton escapes his shackles in episode 4, “Demi-monde“, to release his master into the group’s headquarters in order to find Vanessa for his dark purpose. 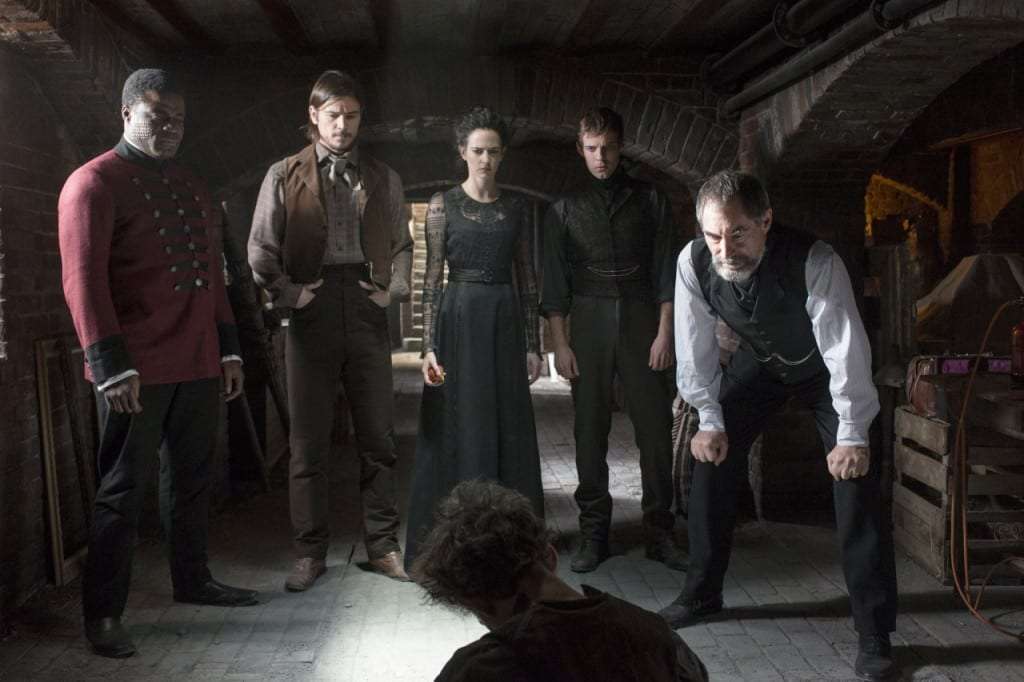 Penny Dreadful also relishes in its use of many fascinating and complex characters from the Victorian era. The series hints at the threat of Jack-the-Ripper with a series of murders and dismemberments being investigated by the police, introduces our haematologist employed by Sir Malcolm as  Professor Van Helsing (David Warner) and gives a nod to the Phantom of the Opera; but in the use of two characters from Gothic revival literature – Victor Frankenstein (Harry Treadaway) and Dorian Gray (Reeve Carney) – Penny Dreadful honours their contribution and legacy to modern-day horror. Both these two characters are central to the stronger adult themes of the series. For the character Dorian Gray themes of sexuality, desire and the aesthetic are central, whilst for Victor Frankenstein it is questions surrounding life and death but also the differences and limitations of both science and literature. 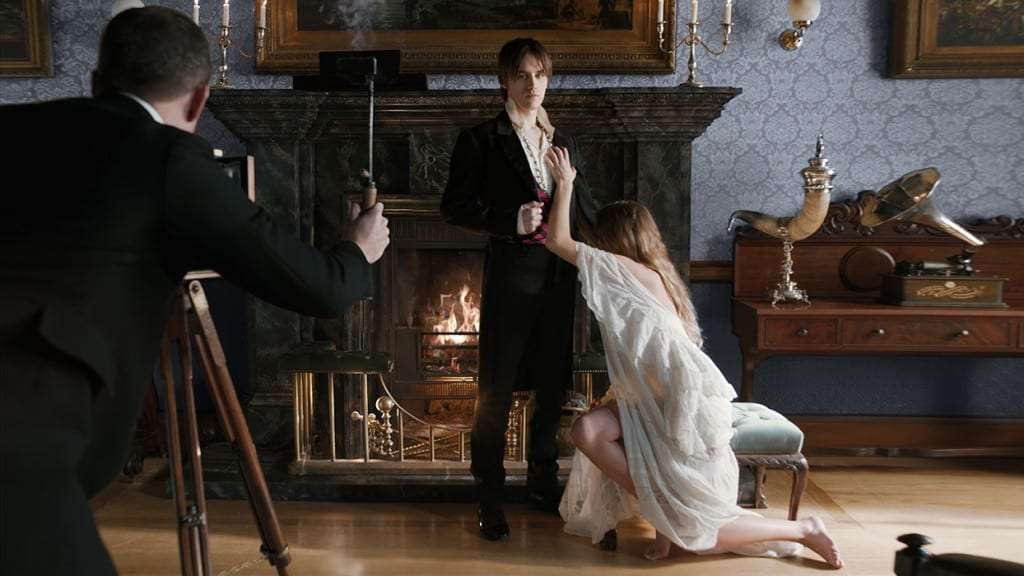 Dorian Gray is introduced to us in “Séance” through his separate and coincidental encounters with Vanessa, Ethan and a sickly prostitute called Brona Croft (Billie Piper), who has also recently become acquainted with Ethan Chandler. Dorian’s exploration of beauty (in all its forms) and the fulfilment of the senses in a time of strict social norms is played out with these characters. From the raw physical attraction and exploitation of Brona to the deeper emotional and ethereal connection made with Vanessa. In “Demi-monde“, the tensions between the characters build to a climax at the Grand Guignol theatre. 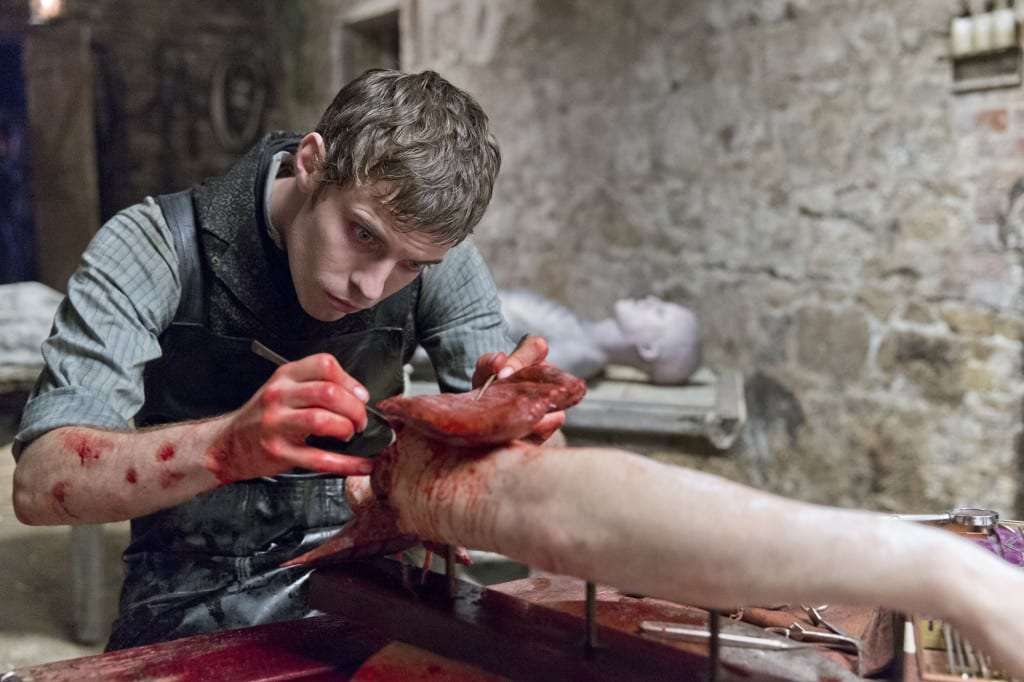 The young surgeon and doctor Victor Frankenstein is recruited to these events by Sir Malcolm to examine and research the vampire-like creature killed in “Night Work“. Victor’s interest in the dead is more intimate and personal for him. We see his new creation , who he calls Proteus (Alex Price). The attachment of Victor to Proteus is apparent and which brings a sympathy to his creation. But this is not Victor’s first creation and his “first-born” has returned to his father with tragic and bloody consequences. In “Resurrection” the Creature (Rory Kinnear) in his loneliness requests one final thing of Victor as recompense.

Penny Dreadful can be summed up as bold, bloody and daring. The tone of the series so far is pitch perfect and is matched by the excellent cinematography and washed colour palette. The atmosphere continues to build throughout these first four episodes with the expectation of what is still to be revealed. Framed by the search for Sir Malcolm’s daughter, Mina, the show basks in its horror roots and occult terrain adding mystery and intrigue to provide unexpected turns in the story. How will Vanessa be used in the dark and dubious scheme of the vampire-like creature? What is the truth behind Mina’s relationship with her father, Sir Malcolm? And can she be saved and redeemed? I can’t wait to find out in the second half of season one. 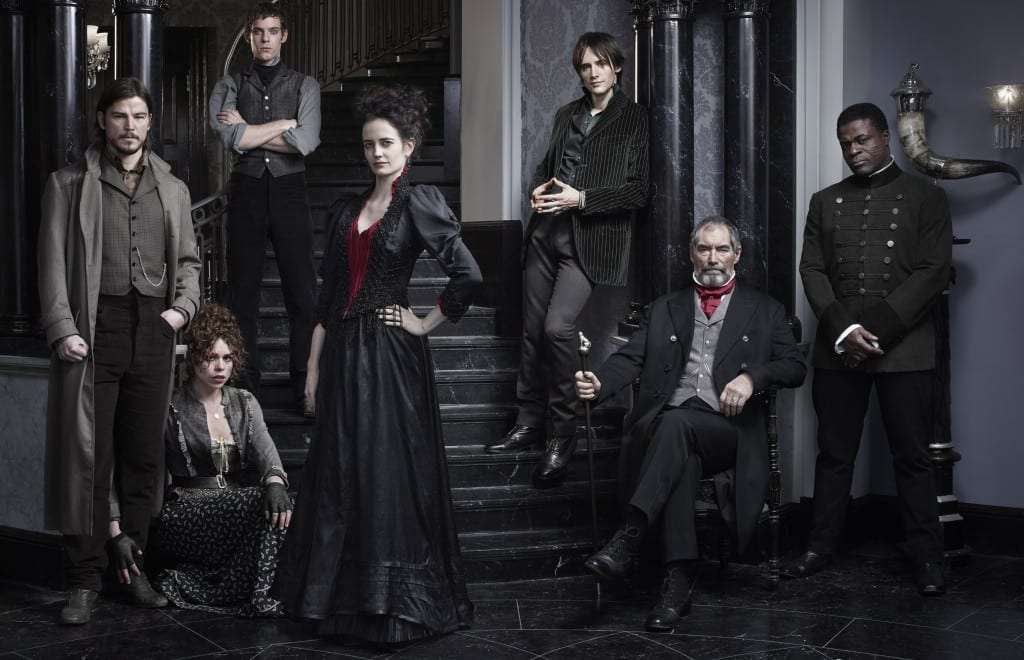 Timothy Dalton, Eva Green and Josh Hartnett are all excellent in their lead roles bringing gravitas, intensity and familiarity to their characters. In particular, Eva Green’s possessed performance at the séance is brilliant being equal parts disturbing and shocking. The secondary lead roles and supporting roles are superb throughout the first four episodes of the season. The interplay between Harry Treadaway and his creations – Rory Kinnear and Alex Price – is captivating and tragic. Reeve Carney is superb at exploring the fetishes of a hedonistic Dorian Gray that is both charming and seductive. How all these wonderful characters interact with one another and what their parts to play may be is something that I am looking forward to in the remaining episodes of season one of Penny Dreadful.

“There is something within us all!“

Penny Dreadful, starring Timothy Dalton, Josh Hartnett, Eva Green and Billie Piper, returns with the episode “Closer than Sisters” this coming Tuesday 10th June on Sky Atlantic HD at 9.00pm. You can also catch up with Penny Dreadful (episodes one to four) with Sky On Demand. If you want to delve deeper in to the background of some of the characters in Penny Dreadful you can check out the Penny Portraits animated shorts on Sky’s website.

It has been confirmed that Penny Dreadful will be returning for a brand new run of ten episodes for a second season in 2015. This is also great news for Dublin and Aardmore Studios in Wicklow where filming on the show will start-up again as the back drop for Victorian London and to show case these wonderful characters.