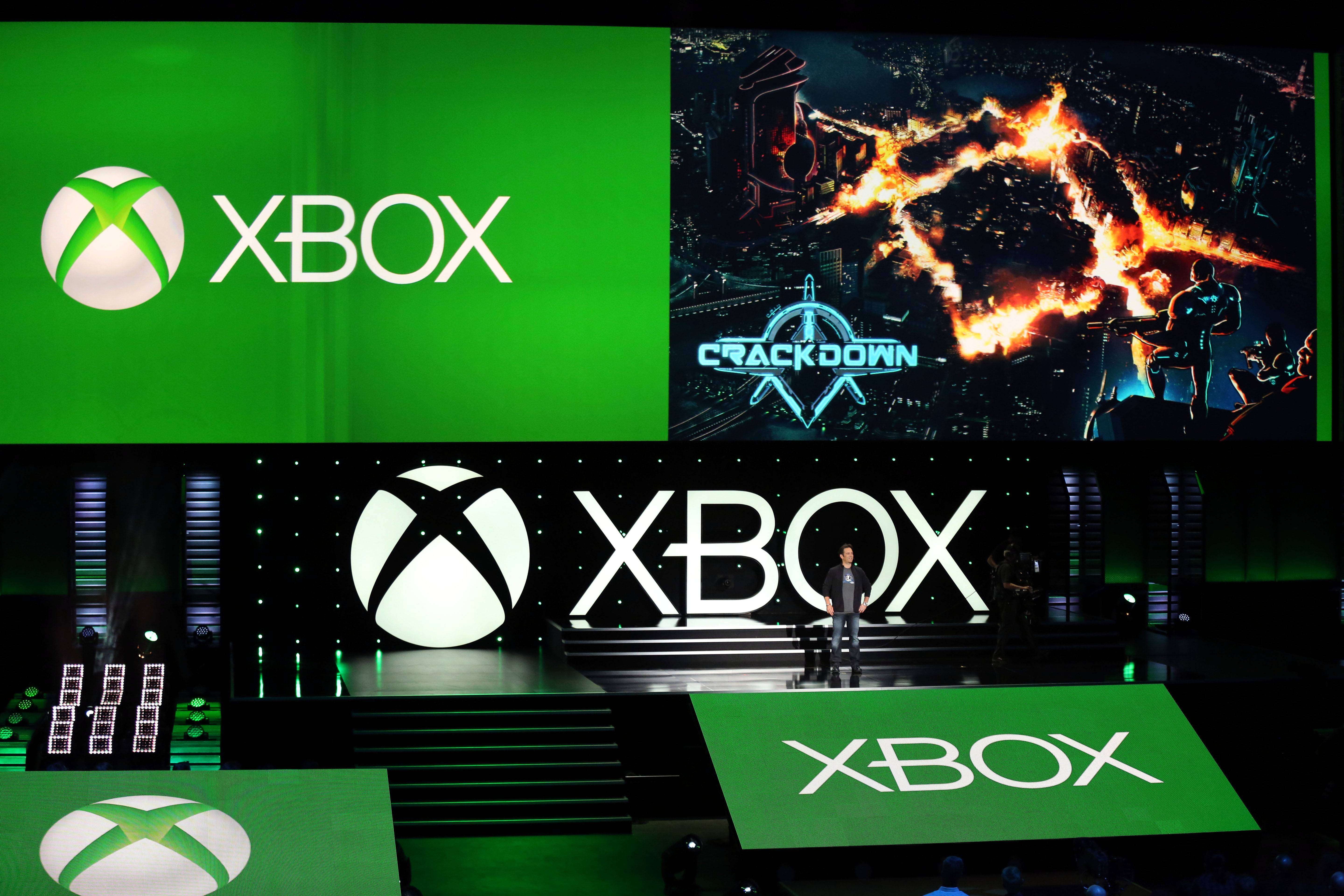 When it came to E3 last year, some of you may remember that Microsoft didn’t pull the genie out of the bottle, especially at some of the Xbox One features it announced. So we were slightly curious as to how Microsoft planned on pulling back some street cred this year. The answer? Games and lots of them. If you missed the conference you can re-watch it here or check out our opinion on conference below. 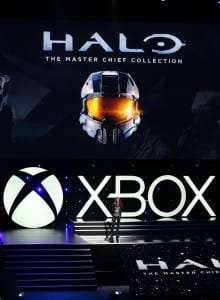 First to the stage was Phil Spencer, head of Microsoft’s Xbox Division, where he confirmed that whole conference would purely focus on games and why Xbox is the best place to play this coming holiday season.

Sledgehammer Games were up first with a live demonstration of Call of Duty: Advanced Warfare. Okay it was impressive, to me just felt very familiar. There was a lot more focus on traversing the futuristic battlefield using jet jump boots and also an increased focus on gadgetry – the player employing thermal imagery and an advanced shield. (Someone’s been playing Titanfall I think).

Next up was Forza Horizon 2, which received a trailer, as well as confirmation that Forza 5 owners will receive the Nürburgring race course DLC free of charge. Horizon will plug-in with the drivatar system in Forza 5 to bring your Forza drivatar into the open world. There’s also a full day and night cycle and dynamic weather. After the trailer it was announced that Forza Horizon 2 will be launched on the 30th September this year. 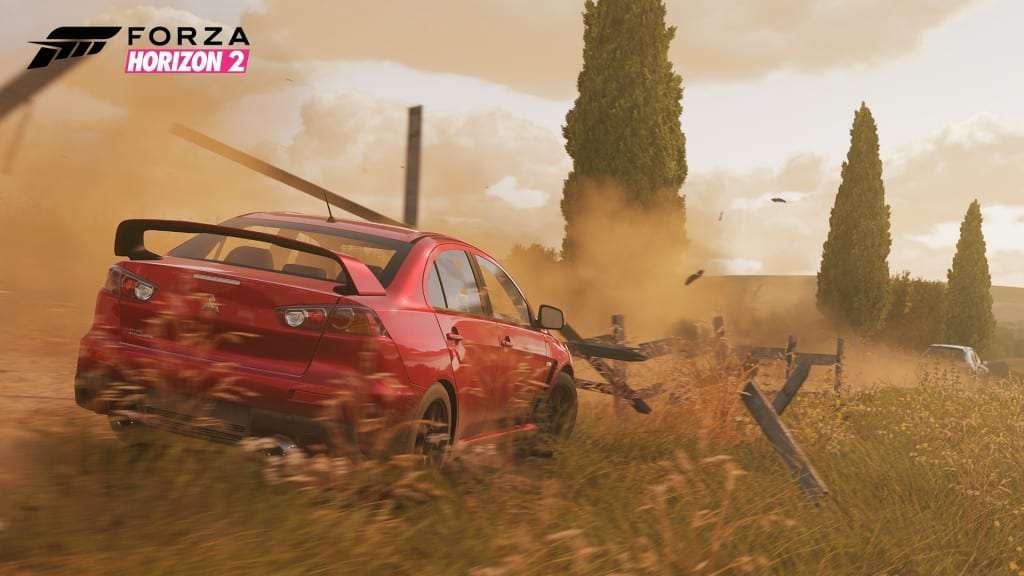 Following Sledgehammer was Turtlerock studios who showed off a stylised gameplay trailer for Evolve which gave us a glimpse at some of the larger beasts in the game. While it was way to short for little old me, I must admit that I was certainly impressed. It was also announced that Evolve will receive an exclusive beta on the Xbox One, as well as Xbox exclusive DLC. 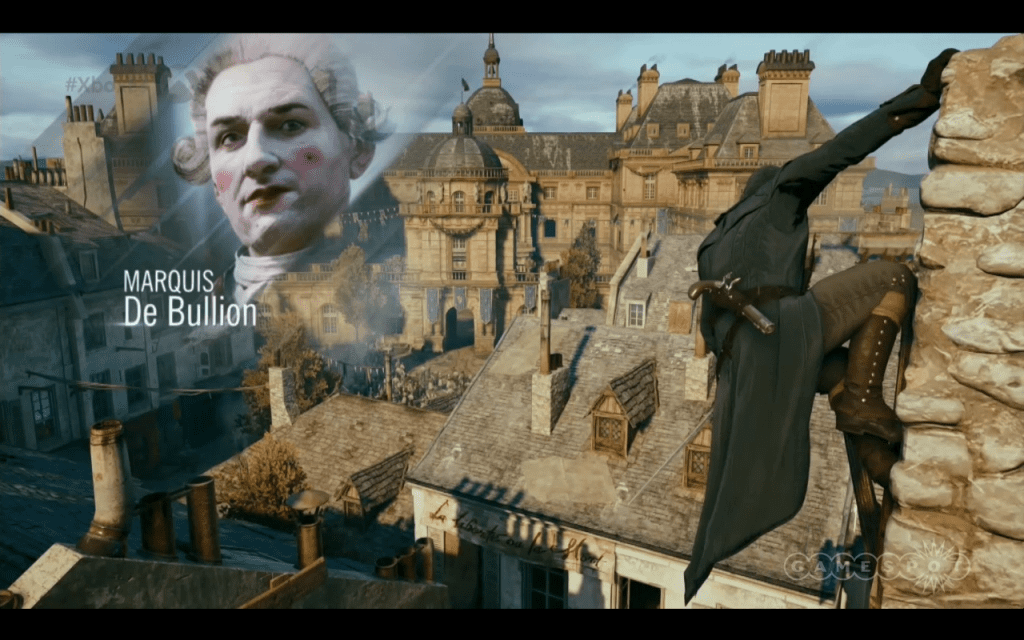 Ubisoft’s Vincent Pontbriand, was up then and he truely got the party pumping by confirming that Assassin’s Creed: Unity will feature 4 player co-op, a series first. But seeing was believing in this conference and true to his word, we then got to see it in action as four assassin’s relentlessly pursued their target through a palatial French mansion in Paris. It looked as brilliant as you would expect four assassin’s teaming up to storm an upper class 18th century party would look and featured a particularly grisly ending. It’s definitely one to watch! 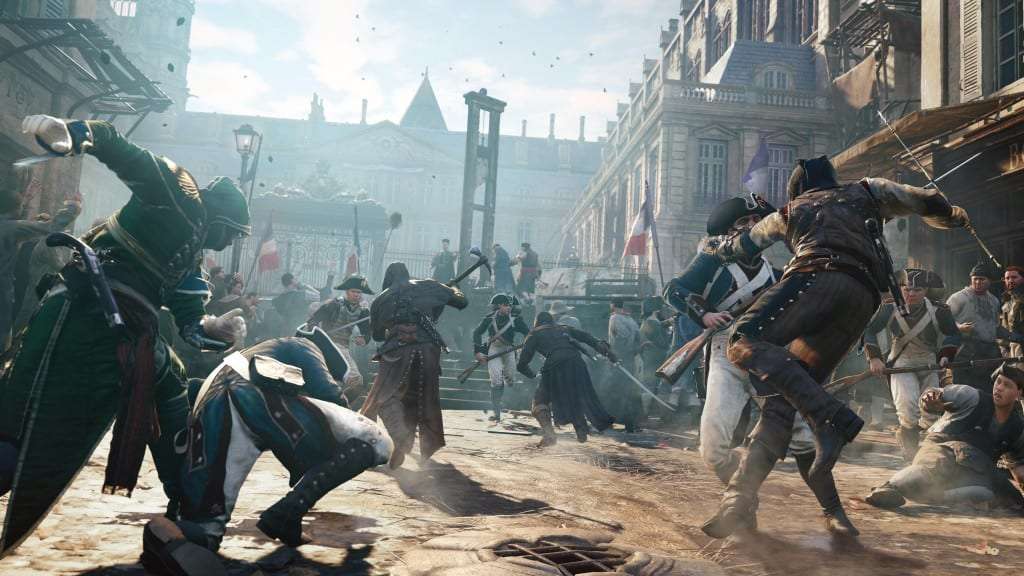 After Unity Microsoft quickly moved onto a Dragon Age: Inquisition trailer which, unfortunately didn’t give us any new information but did look spectacular.

Then friend of the site, CEO of Insomniac Games, Ted Price stole the first half of the show with very tongue in cheek trailer for their new IP Sunset Overdrive, an Xbox One exclusive. Let me just say two things about this game/trailer: firstly, the footage and demo were pretty impressive and secondly, any game that has a giant mutant explode and the word “pop” is literally spelled out by the blood and guts has my attention and will be played. 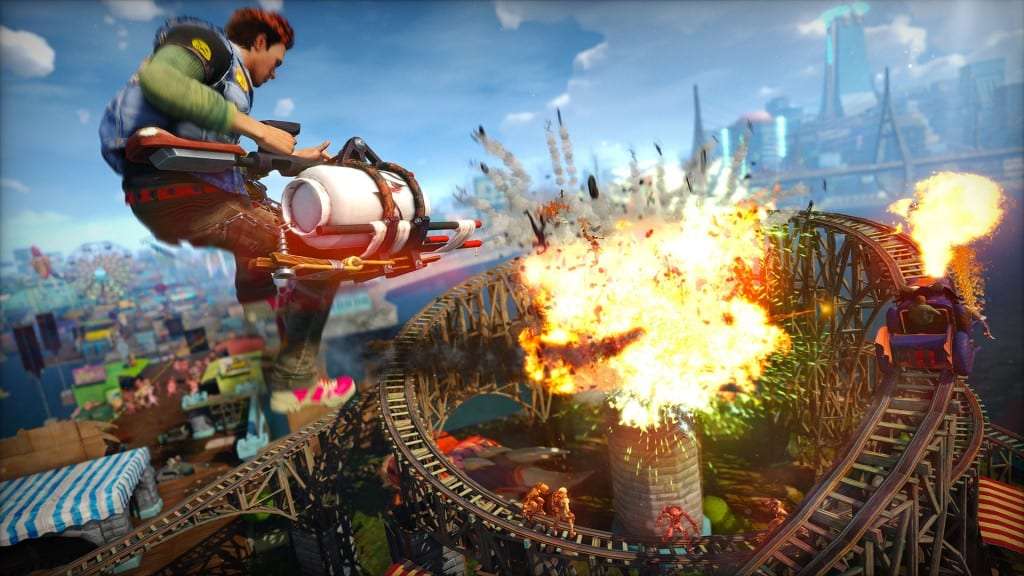 After Sunset, we were treated to the fantastic announcement trailer by Capcom that showed us Dead Rising 3 has a new humorous DLC pack to celebrate Capcom’s “31th” anniversary. The main feature is the ability to cosplay as your favourite Capcom characters in ridiculous arcade co-op action. It’s available now, too. So check it out.

Lionhead then took the stage with a very impressive Fable Legends demo showcasing the four player co-op. The greatest aspect of it was the reveal that 1 player can choose to become the villain. The villain must outwit the four heroes, gaining an RTS like interface to place obstacles, spawn and control enemies and generally do everything he or she can to halt them. I quietly cautious on this title as the Fable series has alway been a huge favourite of mine. 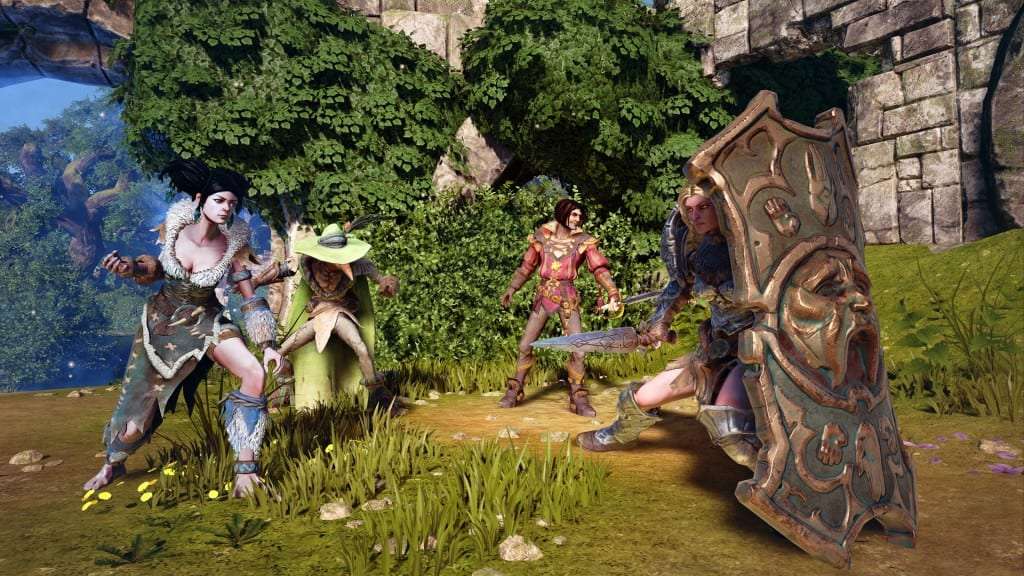 This was closely followed by trailers for Project Spark, Microsoft’s upcoming game creator extraordinaire and for a stunning game from Moon Studios called Ori and the Blind Forest which may be up there for the best looking title in the whole conference.

One of the largest announcements that was revealed was from 343, who dropped the bomb that Halo: The Master Chief Collection which will bring all current Halo games onto the same platform for the first time on one disc. They’ll all be available within the same interface and you can even create playlists to mix your favourite moments across all of the Halo games from Combat Evolved through to Halo 4. The collection will also feature Halo: Nightfall, the live action series from Ridley Scott and each game’s multiplayer will also be present, giving the game over 100 maps.

They also announced that Halo 5: Guardians will launch this December and that Nightfall aims to bridge the gap between Halo 4 and 5. 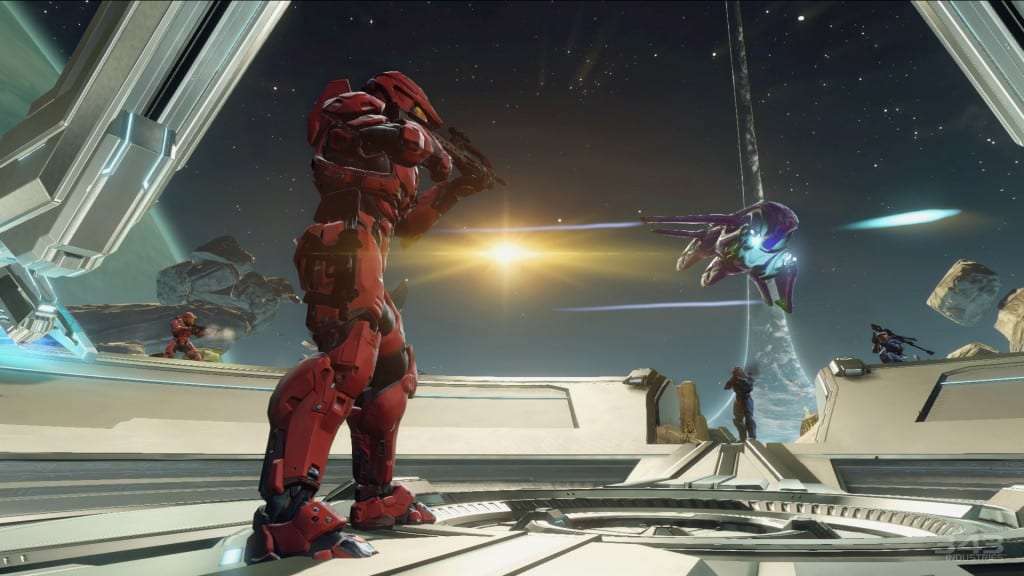 Phil Spencer then returned, and this kicked off a look at Microsoft’s ID@Xbox initiative which focuses on all the Independent developers now working on Xbox One. All in all it’s a very good list and I’m excited to see what comes from it.

Then came the long rumoured Tomb Raider reveal in the form a beautiful CG trailer. In the trailer we discover that Lara is dealing with psychological issues from her trauma in the first game but how will this affect her in Rise of the Tomb Raider? I guess you’ll just have to wait to find out like the rest of us. 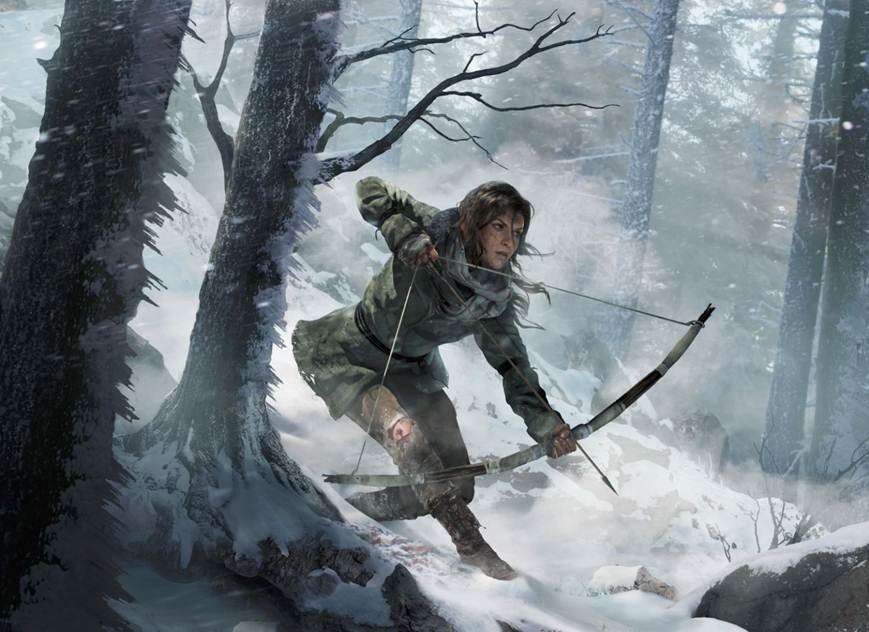 CD Projekt RED followed up with a gameplay demonstration of The Witcher 3: Wild Hunt in which Geralt hunts a Gryphon. Not only does he hunt it, but he kills it and keeps its head on his horse as a trophy. It was great to the see the game in full action mode and I’m glad to say that it looks incredible.

Ken Lobb came on stage to announce that a revitalized Phantom Dust will be making its way to the  Xbox One.

Massive Entertainment took the stage with a gameplay demonstration of Tom Clancy’s The Division. There’s a lot of expectation for this title and the demo showed us why. The players moving through the New York subway system before launching an attack on an NPC held base of operations which they then took as their own. 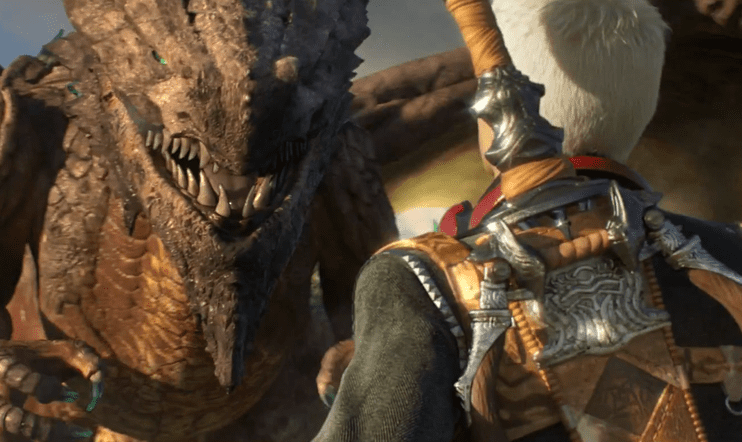 Hideki Kamiya followed and warned us to “prepare to see action on a whole new scale” and this proved to be pretty on the mark as the debut trailer for Scalebound was shown. This trailer honestly had my pulse racing and was one of my personal highlights so far this E3. In the trailer there was a 10 headed hydra, a giant turtle-arachnid thing and too many dragons to count. The protagonist then rode a dragon and he also changed his skin to become SCALEBOUND – (Get the name now!).

So what did Microsoft save for last? The Crackdown remake of course. That’s right. An entirely new remake of the original Crackdown, reimagined for Xbox One.

The presentation was ended with Phil Spencer vowing that the company would continue to listen to fans and do all it can to deliver the machine they demand. And if Microsoft stays true to that pledge, I think amazing times should lay ahead for Xbox One.

There were no huge surprises here but was that a bad thing? Honestly, no! Scalebound was a highlight, while the Crackdown remake certainly has the factor and Sunset Overdrive the personality. Conker’s odd Project Spark appearance and the token Dance Central appearance aside, this was very much about Microsoft trying to tempt back the fans that made Xbox and Xbox 360 the powerhouse platforms they were in the first place. And I believe that they may have done that. To Phil, I tip my hat.