The DC59 Digital Slim is a handheld vacuum from Dyson. We’ve been skeptical about hand held vacuums here before, purely as we assumed they would’t last long enough of have enough suction to actually compete with a regular vacuum. Thankfully we were wrong and it both has the suction and lasted long enough for us to clean a modern 2 bedroom apartment. 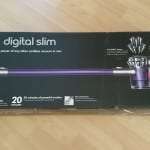 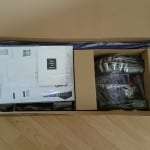 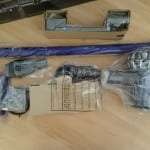 Looking at the nuts and bolts you have the main body of the DC59. It has the Dyson patented 2 tier radial cyclones for that consistent suction. It’s powered by the brand new Dyson V6 Digital Motor. This mortar is unbelievably powerful and incredibly small. It spins at a higher RPM than and F1 car, again helping with the suction and consistent power. On the top, there is an easily removable filter. That purple bit in the middle of the cyclones just pops out and allows you to wash it and reuse it… which is nice!

The power supply for this whole thing consists of a re-engineered nickel manganese cobalt battery. With this battery pack, which is located below the trigger unit, you can vacuum for about 26mins (slightly less with the motorized head attachment and less again in ‘MAX’ mode).
Speaking of ‘MAX’ mode, there is a button on the back of the unit, behind the motor, with the label ‘MAX’ on it… while pulling the trigger, press the max button to get an extra boost of power. 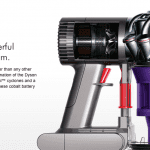 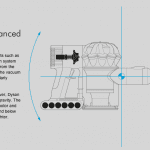 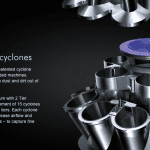 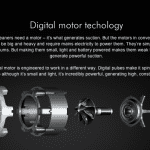 This also has the added benefit of making it seem like a gun, so you gamers out there might actually enjoy vacuuming the home,

While we’re on the topic of the trigger, this is really the main reason that this light, little vacuum can actually last the distance. Unlike traditional vacuums that you turn on, and really leave on most of the time, even when you’re moving things, the DC59 stops as soon as you release the trigger, so its only ever on when you need it and you’re pulling the trigger. This also has the added benefit of making it seem like a gun, so you gamers out there might actually enjoy vacuuming the home, we know it really did make it more fun and easier for us!

Finally we get to the ‘tools’. included in the box of the DC59 were a number of tools. There are 2, powered, motorized heads. A large one that is mainly used for large floor areas and a smaller one for tighter spaces as well as furniture and stairs. Also included is a crevice tool and a tool with soft bristles for more delicate ares. One thing we loved about the motorized heads is that, well 1) they are actually motorized and not driven by airflow like other rotating heads and 2) you can take out the brush head and cut out any caught hair and clean it. The brush head on the big motorized head contains 2 types of bristles. Stiff nylon ones dislodge dirt from carpets and softer carbon fiber ones that remove fine dust from hard floors.

One neat thing we found out, if you are trying to vacuum carpets with longer piles, the head will actually stop so it doesn’t get tangled in the longer pile, which is nice! 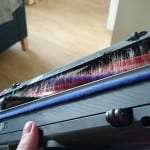 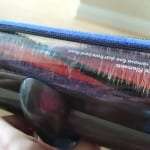 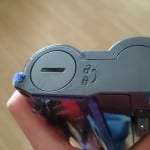 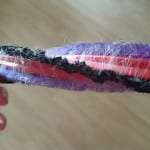 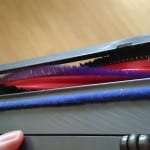 In actual use, we found ourselves using the Dyson DC59 a heck of a lot. Before, taking the old vacuum out of the press, finding all the bits, pulling out the cord, wheeling it to the spot thats needed, was frankly, just a pain and something we avoided doing. With the DC59, conveniently docked in the included docking station (which also holds the accessories), all we had to do was pick it up, vacuum up where it was needed and dock it back in. Super quick. We found ourselves at that point just giving the rest of the apartment a quick once over because it was so easy.

The whole unit is so well balanced that you really don’t notice any stress on your wrist or upper arms, not that you need to hold if for any long periods of time as it’s just so quick to zoom around and do a quick clean up.

Also, given that apartment living is so common, cleaning your car has become a bit of an issue as well, trying to get a traditional vacuum powered all the way to the basement from the top floor isn’t really possible. The DC59 was stellar in this area. The smaller motorized head did an amazing job cleaning the seats and the carpets and the brush attachment did a great job on the dash. 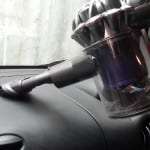 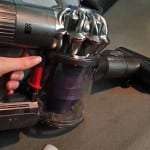 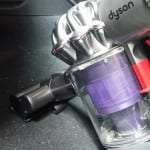 We have 3 minor niggles with the DC59 though. 1 is the dust collecting bin. We found that it was a bit small and required a bit of emptying. We also found that the bing release switch was a quite stiff and when it did open, we still and to pry out the collected dust with our fingers as it tented to be wrapped pretty tightly around the central cylinder. The second was the fact you can’t attach tools from other models. We really wanted to pick up the non-motorized head for the DC59, but couldn’t find one that actually connects to it. We could be wrong and obviously, will update our review here should we find one that fits. Lastly, we would have liked to have seen an option for a flexible hose. This would have been very useful for those tighter spots, namely in around our media center were we could only get a couple of inches back with the attachments. We fell that a flexible hose would allow you to get the softer brush in and around the cubby holes that tend to gather the most dust due to fans in consoles and media servers sucking and and blowing out dust.

there’s very little not to like about the DC59

Overall we loved our time with the Dyson DC59 Digital Slim. We went into this review really not convinced that we could get rid of our ‘standard’ vacuum with a hand held model, but came out the other side thoroughly convinced that we could. Bar the minor niggles noted above, there’s very little not to like about the DC59. It’s super simple, and fun, to use. Crazily convenient and versatile.

The DC59 is available a various stores nationwide for 399euro. See Dyson.co.uk for details.