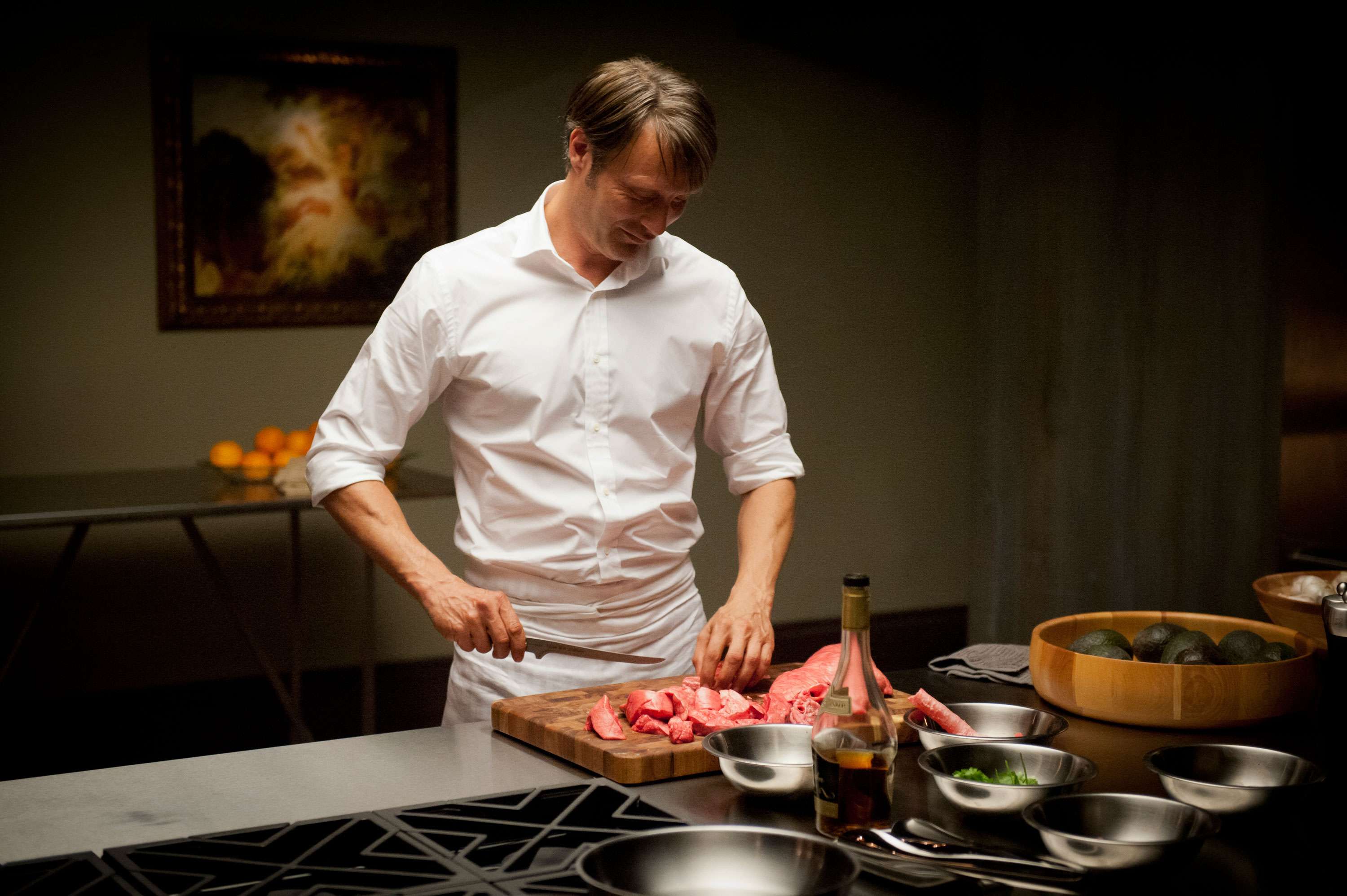 Hannibal Season Two: The Prime Cuts so far…“Feed your fear”

Heinous crimes and brutal murders pepper the second series of Hannibal being both an integral part of the main story arcs and interesting side investigations. Lector (Mads Mikkelsen) with his notorious love of food and a fondness for the theatrical (death) certainly maintains these gruesome qualities along with other mentally imbalanced protagonists. 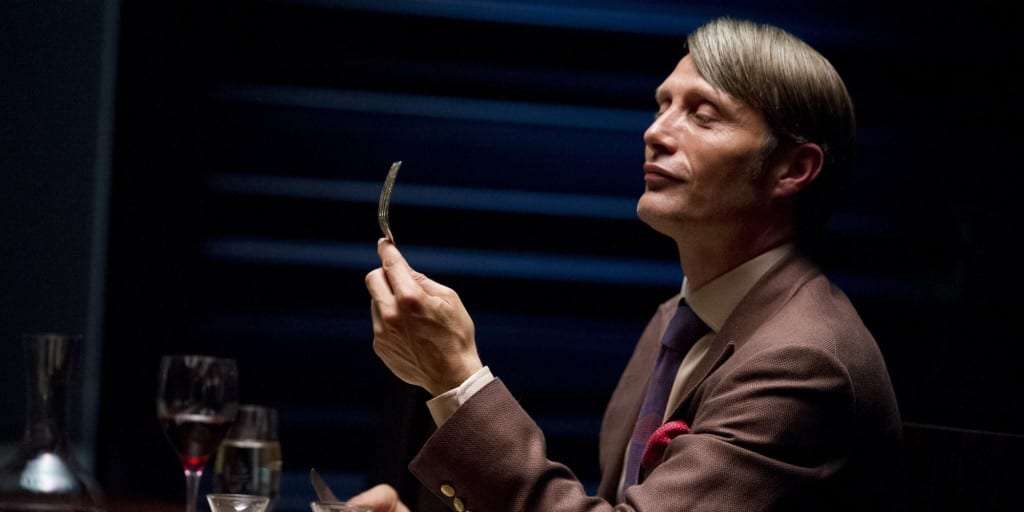 Here are my choices of the important grisly scenes so far from season two of Hannibal:

Honey Pot: A man is found dead in woodland with a bee-hive occupying his skull cavity. We discover that the man was lobotomised by his acupuncturist (Amanda Plummer) who sees her patients suffering with no hope. Her particular brand of acupuncture certainly relieves these symptoms! Whilst this storyline acts as an aside to the principal story arc in season two the death scene is morbidly captivating and very reminiscent of the naturalistic use of victims as a fertilizer for growing mushrooms in the episode “Amuse-Bouche” from season one.

Paved Paradise: In nod to “Big Yellow Taxi” by Joni Mitchell a local councillor, Sheldon Isley, in episode 6 “Futamono” is found dead in a parking lot that was built under his authority leading to the destruction of a local habitat for rare songbirds. This particular topiary has the councillor surgically grafted in to the tree and his main organs replaced by blooms from poisonous flowers. Importantly, the lungs remain and allow the forensic duo of Price and Zeller to locate the area of the councillor’s death leading to the crucial discovery of a missing FBI agent. 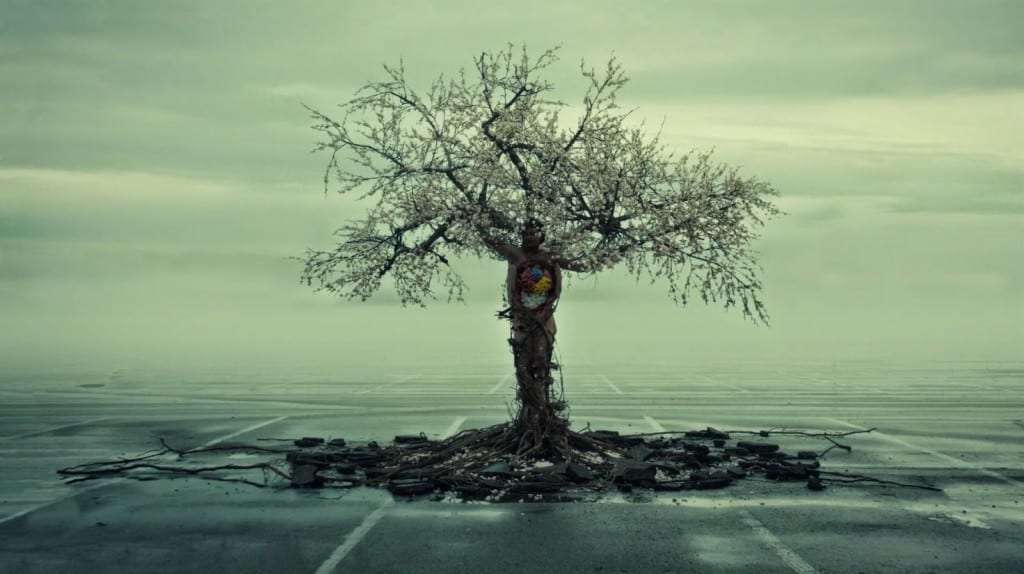 Rough Justice: The trial of Will Graham (Hugh Dancy) sees the hands of two killers intervene to protect Will. To cause doubt that Will is the intelligent psychopath portrayed by the prosecution the court bailiff, Andrew Sykes, is brutalised in all the ways used by the Ripper. As dissimilarities begin to emerge in the manner of Sykes death compared to the Ripper’s victims the judge considers the evidence of this killing to be inadmissible in court. This leads to the unequivocal “sentence” of the judge in his own courtroom as he is barbarously killed and left suspended, balanced in mid-air like lady justice herself. This results in the collapse of the case against Graham.

Gideon ralentir cuit: Whilst Abel Gideon (Eddie Izzard) isn’t technically murdered in episode 6 “Futamono” a part of him most definitely is dead and slow-cooked. with Gideon hospitalised at the hands of Dr. Chilton (Raúl Esparza), Hannibal takes the opportunity to indulge his murderous empathy and kidnap Gideon as a prize. In a scene, similar to Krendler’s feast in Ridley Scott’s Hannibal, Hannibal “treats” Gideon to a ghoulish meal of his own braised leg as the centre piece!! From these events, Hannibal, in the process of kidnapping Gideon toys dangerously with the FBI leaving grisly little tidbits of evidence from Ripper cases; and embroils Graham’s former lover Dr. Bloom (Caroline Dhavernas)as his alibi. 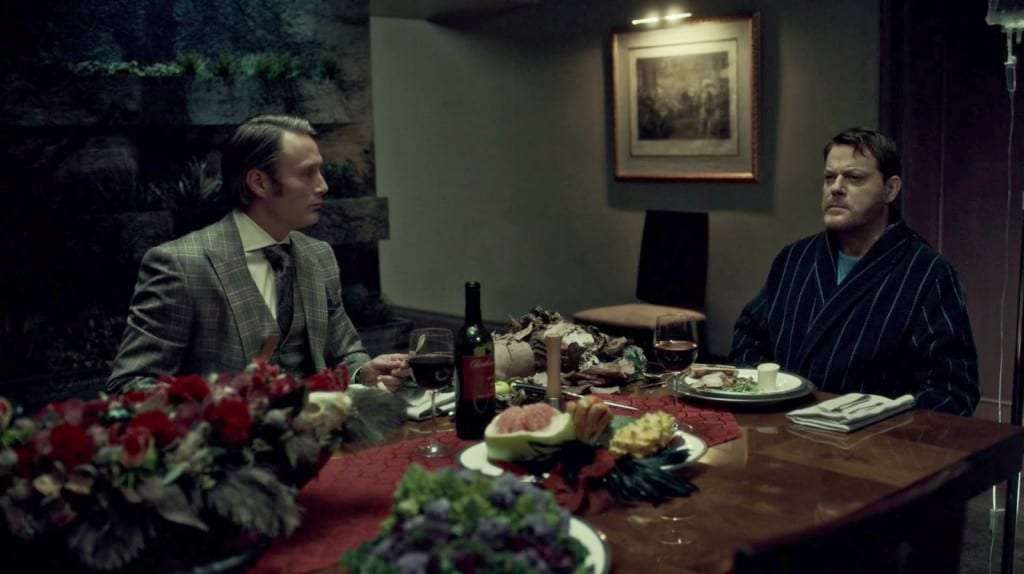 Blink: The final chilling scene of an eye looking up at the heavens and crafted from numerous different victims of different ethnicities and skin tones stitched together in a grain silo is played out over two episodes, “Kaiseki” and “Sakizuke”. Known as the “mural killer”, James Gray, is collecting bodies in a way that is similar to Buffalo Bill in Silence of the Lambs and his purpose is a macabre aesthetic, but one that captures Hannibal’s attention. As part of the FBI investigation Hannibal’s killer instinct leads him to Gray and his unusual canvas. In a grim twist of fate Gray becomes stitched in to the centre of his own mural.

Modern Art: In a shocking exhibit, spookily like the Damien Hurst artwork “Mother and Child (Divided)” a member of the Behavioural Analysis Unit (BAU) is horrifically displayed for getting too close to Hannibal. The body contains the kidneys of James Gray, the mural killer, and is laid out at the observatory connecting the death to previous crimes carried out by the Ripper and those crimes of Abel Gideon. This death has important consequences for the actions of Will Graham towards Hannibal, it indeed confirms that nobody is off the menu and it increases the motivation of the FBI to resolve these investigations.

Whilst the mature and gruesome themes may not be for everyone’s palette and the heavy stylistic elements may be too much to swallow for others, Hannibal is a one of the best made series on TV at the moment. Watch out for the mid-season review later today. 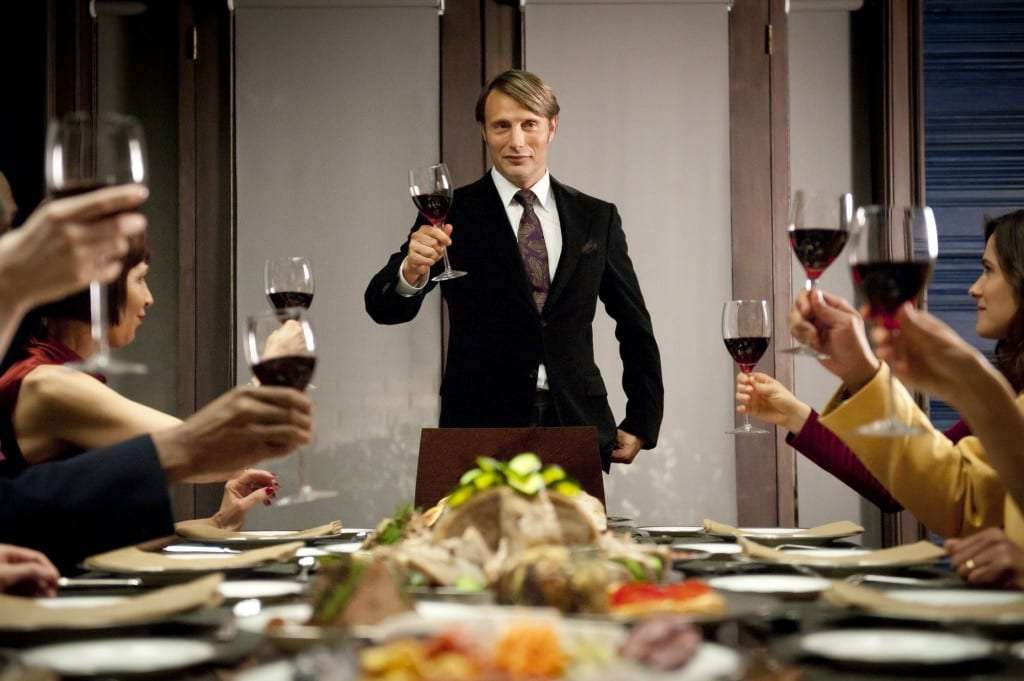