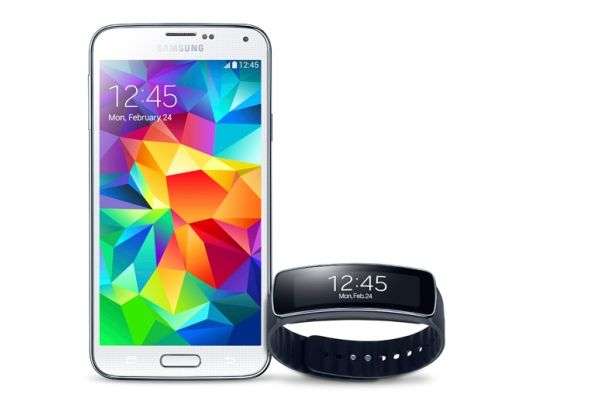 The global mobile consumer base over the last few years has come to expect a certain level of excellence from Samsung’s Galaxy S series and its accessories, but has Samsung created another device – the Samsung Galaxy S 5 and Samsung Gear Fit, that stays true to this level of excellence?

In short… YES! This reviewer took both devices out for an extended spin recently and with a heavy heart gave them back. Why a heavy heart? Well because for once I had discovered a phone and accessory that complimented my lifestyle without my lifestyle having to bend and change to my devices. First, let me discuss the phone, then the smartwatch and you can decide.

The Samsung Galaxy S 5
The Galaxy S 5 is packed with hardware upgrades on its predecessors and a lot of them are not visible to the casual observer. The S 5 has a slightly bigger screen. A much greater battery. A bigger camera. Moreover, the cherry on top is the greatly improved processor. All this has been crammed into a phone that is unnoticeably bigger than its predecessor – a few millimetres larger and only a few grams heavier. 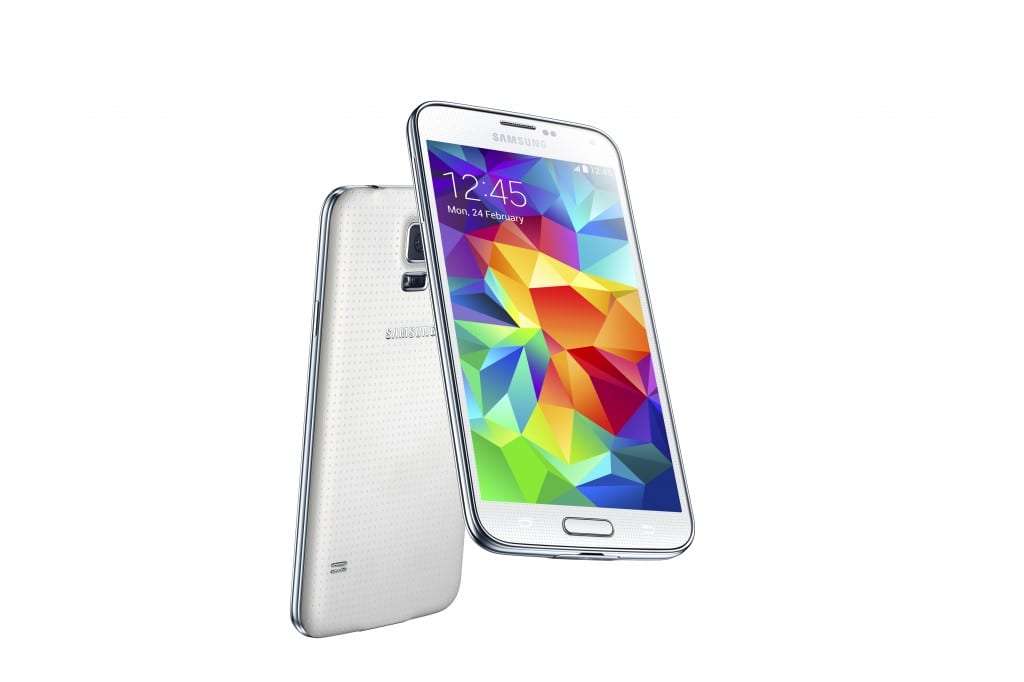 Samsung even managed to add in a few new features, including a fingerprint sensor that’s hidden under the home button and a heart rate monitor that doubles as the flash, to name a few. The 5.1-inch Super AMOLED display is full HD (1920 x 1080) and stunning. The screens clarity, quality, and viewing angles make it an ease to use day-in and day-out and it all combines to give perhaps one of the most vibrant colours from a screen of any smartphone on the market.

Those who are used to the layout of the S 4 will be happy to know that the Samsung Galaxy S 5’s layout matches the S 4 in almost every way. The S 5 has the volume buttons on the left side, power button on the right side, Micro USB 3.0 charging port on the bottom, and 3.5mm headset jack and IR blaster on the top. The home button on the device has a capacitive buttons on each side of it: multi-tasking on the left and back button on the right. As I said earlier, the home button now doubles as a fingerprint scanner, which can be used in place of a passcode to unlock the phone. However, you can also use your fingerprint to make immediate payments with PayPal or gain access to locked files on your phone that you have set as private. 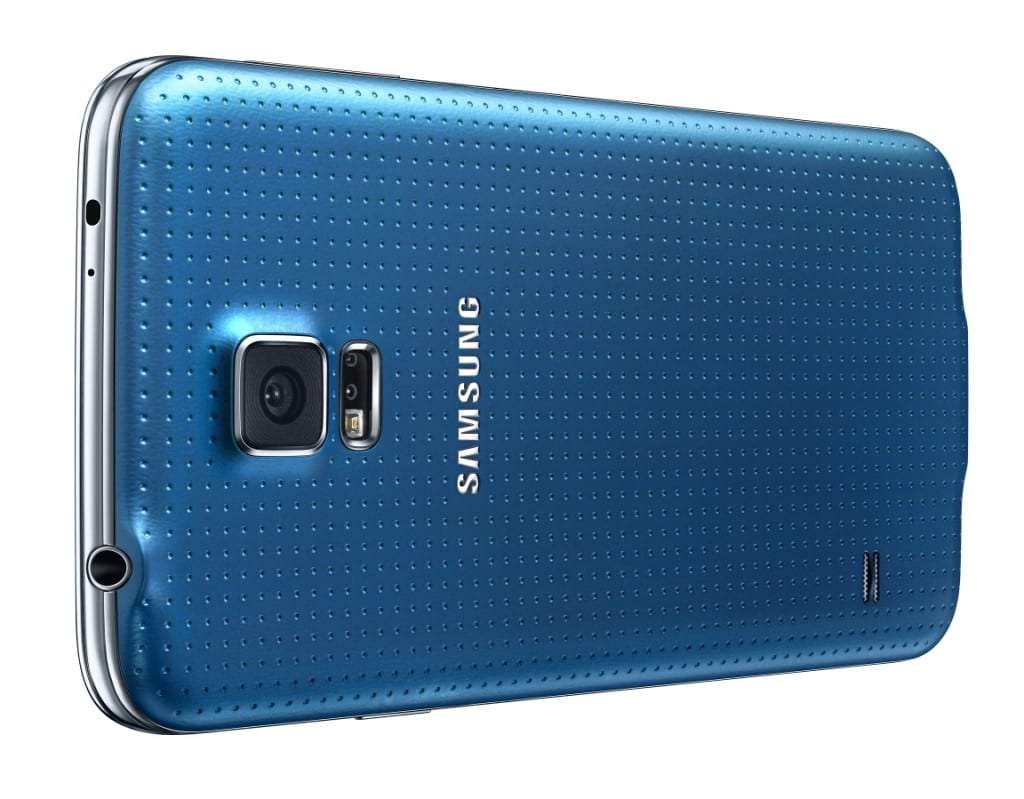 As with any Android device now, hold down the home button and you will get Google Now. The Samsung Galaxy S 5 differs by allowing you to optionally set a double tap of the Home button for S Voice.

Within the S 5, you will find that it has a 2.5GHz quadcore processor (Qualcomm Snapdragon 801), Adreno 330 graphics unit, and 2GB of RAM to power it.

The Samsung Galaxy S 5 has a 16MP camera and 2MP front-facing camera, an improvement from the S 4′s 13MP/2MP combination. Technically speaking, unless you are a certain type of eagle eye person (you know who you are) you probably will not notice the 3 megapixel difference between the two generations unless.

The real upgrade with the S 5 camera is its software and features. The upgraded camera interface is simply gorgeous. It is simple, intuitive, enjoyable, and easy to find what exactly what you want. So overall, the Galaxy S5 camera is a solid improvement. 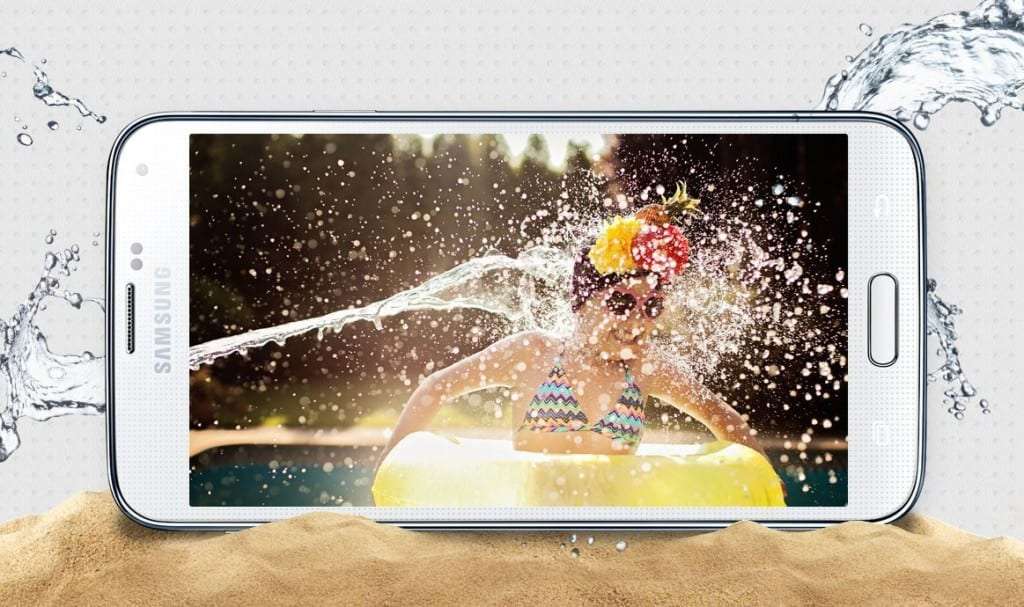 Oh, did I mention that the Samsung Galaxy S 5 is waterproof. Yep, it is. Samsung describes the water proofing as, “resistant to sweat, rain, liquids, sand and dust, so your phone is protected for any activity and situation.” I would not go swimming with it or drop it into a toilet but for day-to-day activities, it is essentially waterproof.

My testing experience with the Galaxy S 5 was near perfect from a performance and battery standpoint. The 2.5 GHz quad-core Snapdragon 801 processor and its 2GB of RAM seemed to power Android 4.4 KitKat with the greatest of ease. If you have read any of my other reviews, you will know that when it comes to phones, I am a heavy user. (Seriously, I rarely get a day out of my phone, if I do not give it an extra boost throughout the day.) Therefore, I was very surprised with the Galaxy S5′s battery life, lasting a full day without much difficulty, offering additional battery saving modes for crunch time. 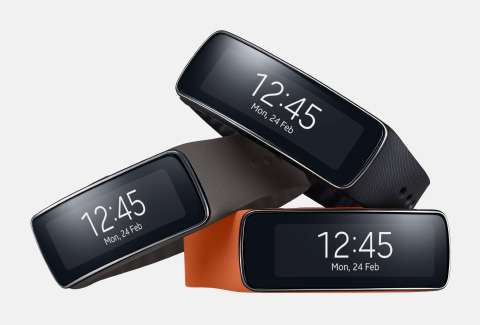 The Samsung Gear Fit
I have to admit, I was not a huge fan of Samsung’s first Galaxy Gear smartwatch, because to me, it felt heavy and chunky and that is not what I want from a watch. The Gear Fit solves that problem. It is thin, light and features a curved colour screen. The Gear Fit, as the name implies, is a fitness-tracking device that also doubles as a smartwatch. The device itself has a bright, eye-catching 1.84-inch colour touchscreen that is attached to a rubbery band that comes in a variety of colours so you can customize it whenever you want. It’s incredibly light — just 27 grams — and largely mimics the feel of other popular fitness-tracking bands

However, unlike its biggest competitors such as the Fitbit, Nike FuelBand and Jawbone Up, the Gear Fit comes with a twist. The device can double as a smartwatch and good one at that too! It is a strikingly pretty device, and one of the most intriguing wearable’s I have seen so far. 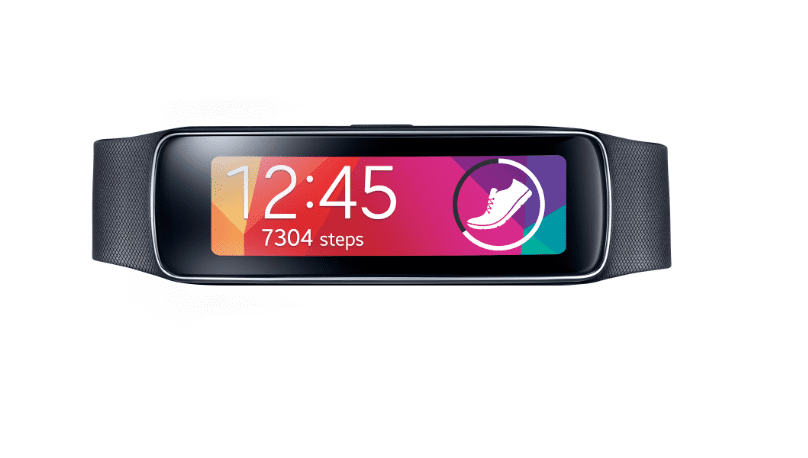 The Gear Fit connects to your phone using Bluetooth and a special app called the Gear Fit Manager. Unfortunately, it will only synchronize with Samsung’s Galaxy line of smartphones and tablets, so other Android phone users are out of luck.

On the device, you can swipe left and right to navigate, and tap on icons to launch features like the heart rate monitor, pedometer and notification viewer. There are also a variety of different home screen watch faces and wallpapers to choose from, including a really handy one that shows you the current weather along with the time.

Whenever you get a new notification, the Gear Fit displays the text on the screen. You can tap a button to launch the corresponding app on your phone, or delete the notification and view it later. For incoming calls and texts, you can use the Gear Fit Manager to pre-program a few common responses like “I can’t talk now…I’m in a meeting” so you don’t have to pull out your phone. However, for everything else, you will need your phone to respond to incoming notifications. 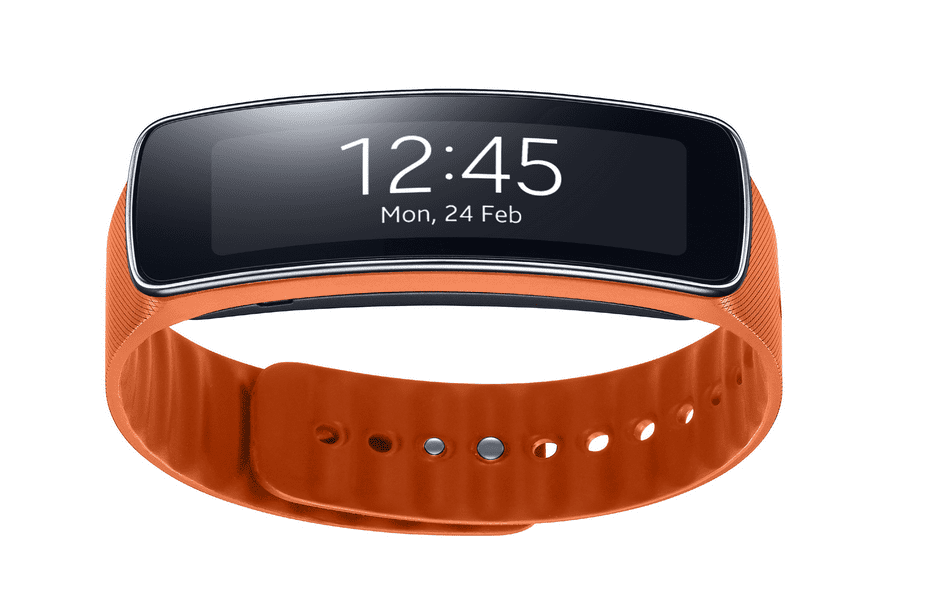 For fitness, the Gear Fit takes the goals you put into S Health to prompt you as you exercise. If you want to burn 500 calories during a run for example, the Gear Fit can tell you to run faster or slow down so you reach your goal. The device is also water resistant, so you will not have to worry about breaking it if you sweat or get it a little wet when washing your hands.

Even with that colour display and small body, I was able to get a surprisingly good battery life out of the Gear Fit: usually between 3 to 5 days depending on how active, I/the device was.

The Samsung Galaxy S 5 – The Bottom Line
The Galaxy S 5′s exceptional hardware performance combined with great battery life will alone make many customers very happy, especially those coming from older generation phones (they’ll really notice the difference). On paper, Samsung has improved their offering in nearly every area imaginable. Aside from packing a more powerful punch in a similarly slender frame, the S 5 improves both performance and battery life while retaining the crown for, what i consider, best mobile display.

The Samsung Gear Fit – The Bottom Line
The Gear Fit is light and comfortable to wear thanks to its rubbery, flexible band and curved display that matches the contour of your wrist. The display is very attractive, too. It is bright, colourful and responds well to touch. Overall, the Gear Fit is a very sleek combination smartwatch and fitness tracker and makes me excited to see the next generation of watches now that Android Wear has launched.