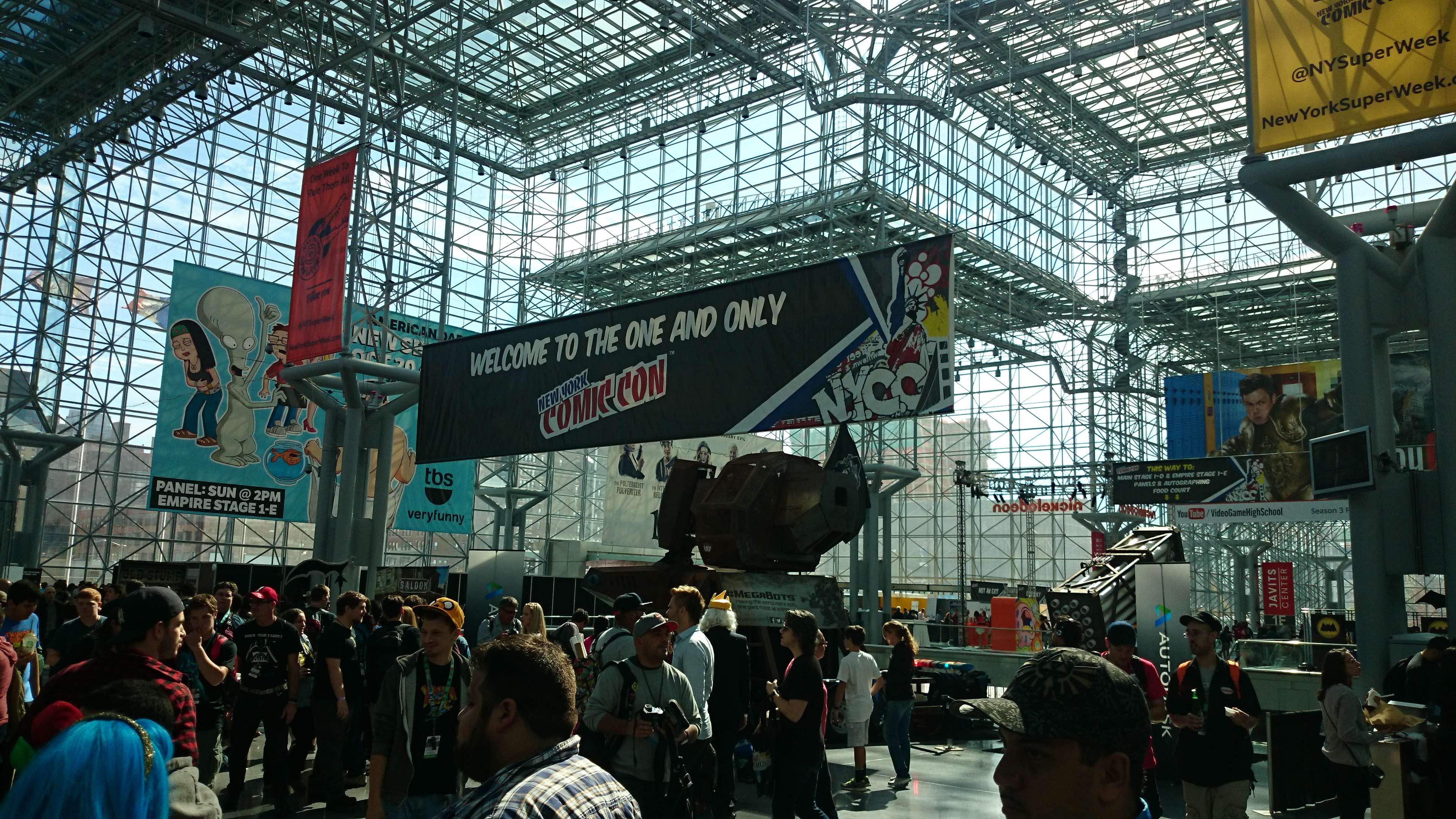 New York Comic Con 2014 (NYCC) has come to an end and fans are heading back home after four days of some amazing fun and fantastic panels, screenings and interviews. NYCC has also been confirmed as the largest Comic Con in North America with 152,000 comic, TV and film entertainment fans in attendance, with this excellent news here is our top five moments of NYCC 2014 that we loved from the event:

Jeph Lobe had much to do at NYCC this year as he also hosted the Marvel’s Agent of SHIELD slot. In the build-up to an early sneak peek of episode four of season two he also revealed that he was Hydra as he opened his shirt to reveal a “Hail Hydra” t-shirt to shock from the audience!! To make up for his temporary Hydra allegiance he introduced Clark Gregg (Director Coulson), as a surprise guest, who began to elicit exclusives to redeem our lost Jeph Lobe. With this awesome exclusive footage of the upcoming Marvel’s Agent Carter was rolled to tight security. Early footage showed Haley Atwell as Agent Carter moving effortlessly from refined spy to bad-ass fighter.as she kicks an enemy of the young SSR (Strategic Scientific Reserve) out of a window and we got to see an early look at Edward Jarvis. The audience was pumped after these exclusives and so were we for the new season of Agents of SHIELD but also for the mid-season Agent Carter tie-in that looked great. We most definitely can see that the connections with the Marvel Universe will continue between these two series. 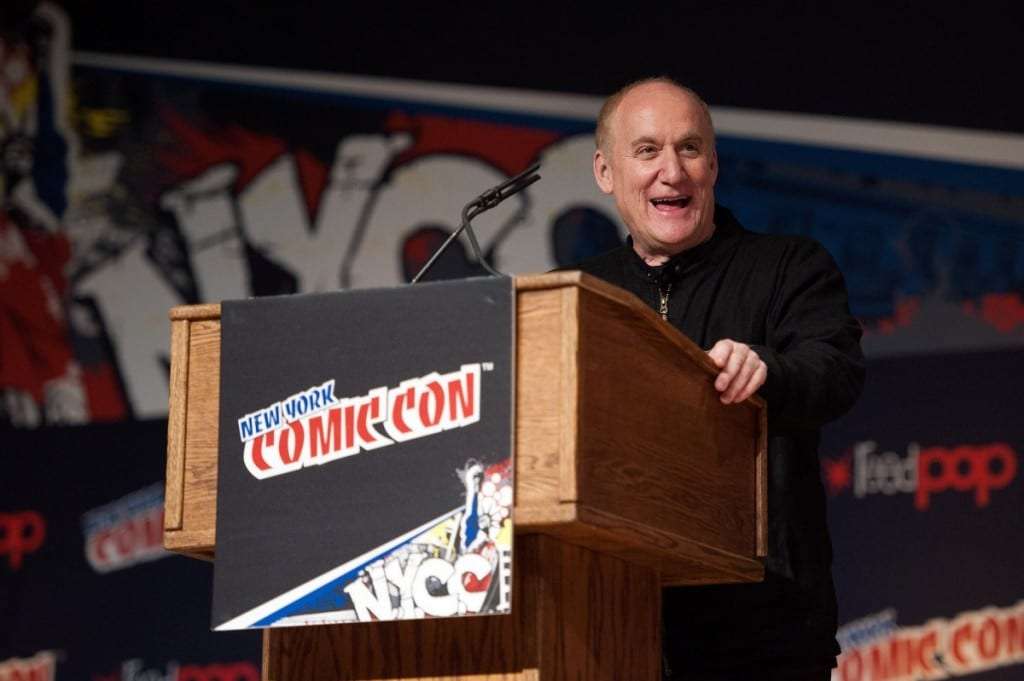 Gotham which premiered on the 22nd of September in the USA to great reviews and ratings and on Channel 5 in the UK last night had the big panel of Sunday. Most of the major cast showed up for the panel to discuss the show. Unlike the San Diego Comic Con panel which Ben McKenzie told us was presented while trying to convince the potential audience that the show “wasn’t going to suck” the series is now four episodes in on US TV. Gotham has established a large fan base and the panel consisting of Ben McKenzie (Jim Gordon), Donal Logue (Harvey Bullock), Robin Lord Taylor (Oswald Cobblepot), Erin Richards (Barbera Kean), Sean Pertwee (Alfred Pennyworth) and Executive Producer Danny Cannon didn’t disappoint. After some general questions to each of the panelists from moderator IGN’s Eric Goldman the floor was turned over to the fans for the best Q&A of the weekend. When asked by the fans about the potential of various characters showing up Danny Cannon said he’s hugely excited about the reveal of Harvey Dent and Victor Zsasz in episodes eight and ten of season one and is open to delving into characters such as The Court of Owls and Harleen Quinzel. Robin Lord Taylor also basked and delighted in the fan response to his portrayal of Oswald Cobblepot which has seen him in a break-out performance and was fantastic to see. Clearly this show is going to be one of the biggest of the year and has been confirmed for a full 22 episode run by Fox in the US and debuted to win it’s time slot in the UK on channel 5 with over 2.5 million viewers.The great reception of the premiere episode in the UK and now with four episodes under its belt in the USA, which we have been lucky enough to see whilst at NYCC, this show is really excellent and keeps building and delivering for its fans. 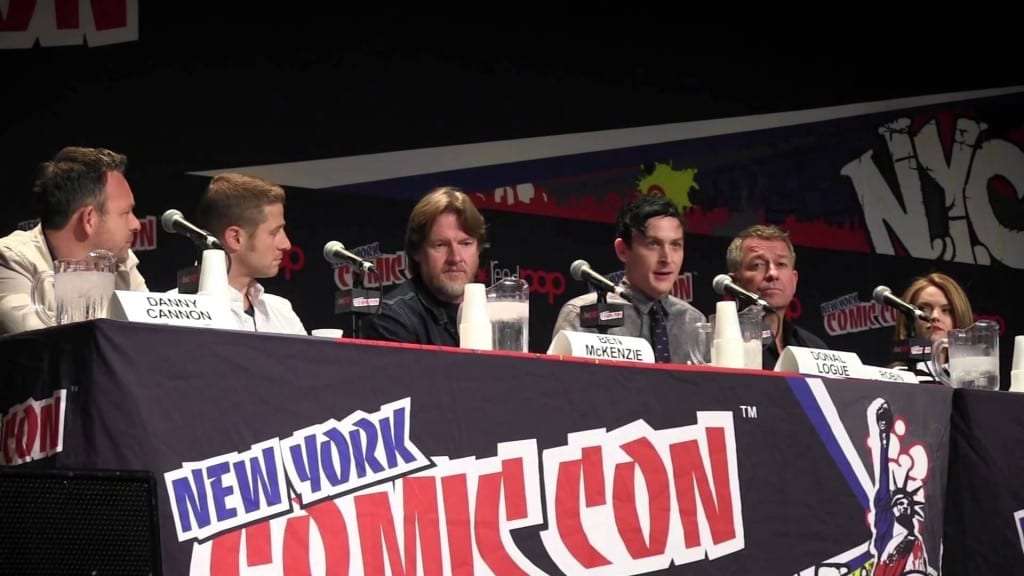 The highly anticipated Daredevil Netflix series was shown off at the event by Executive Producer Jeph Loeb presenting four exclusive never before seen clips from the upcoming show. That included a first look at Daredevil’s initial costume, based on Frank Miller’s “Man Without Fear” run on the comics. It was confirmed in another of the clips presented that this costume is a work in progress so we are likely to see the traditional red costume in future episodes. Most of the cast for the show were in attendance including Charlie Cox (Matt Murdoch, Daredevil), with a noticeable red dye still in his hair, Vincent D’Onofrio (Wilson Fisk/Kingpin) looking every bit the part in a black suit with shaved head, Eldon Henson (Murdoch’s Law-firm partner Foggy Nelson) who auditioned for the role from the set of Hunger Games, Deborah Ann Wolf (Love interest Karen Page) who flew directly from the final episode of True Blood to film her first scenes of Daredevil overnight. Also on the panel were character actors Bob Gunton (Shawshank Redemption, Argo) and Vodie Curtis-Hall (Chicago Hope, Die Hard 2) who play Leland Owlsley and reporter Ben Urich respectively. Absent from the panel was Rosario Dawson who has been confirmed in the part of Night Nurse with a scene debuting at the panel of her tending to the wounds sustained by Daredevil. Charlie Cox confirmed that the benefit of working with Netflix on the show is you don’t have to catch the audience up or have a cliffhanger every episode so this will play out like a 13 hour film. We can’t wait to see the final show when it premieres exclusively on Netflix in June 2015 and it increases our excitement for the other Netflix shows, “Jennifer Jones”, “Iron Fist”, “Luke Cage” all leading into a small screen event “The Defenders”. 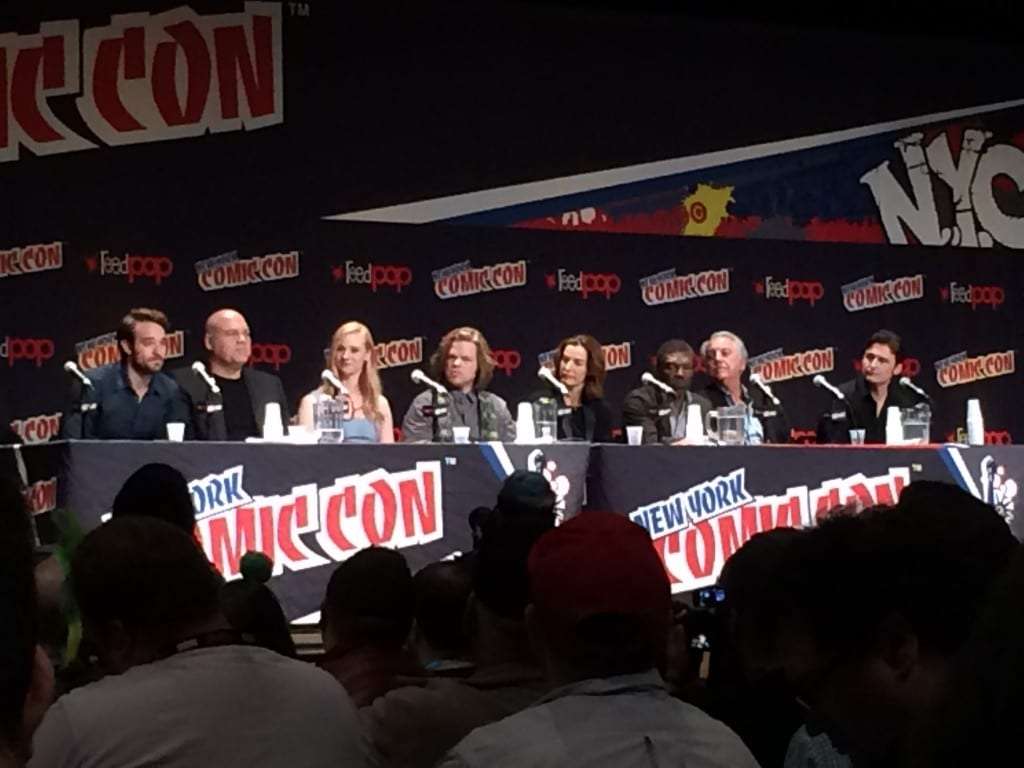 Undoubtedly though the biggest panel of the weekend was the full cast panel for The Walking Dead which premiered on Sunday the 12th of October on AMC in the US and Monday the 13th on Fox in the UK to it’s highest ratings yet. The first reveal of The Walking Dead TV show was also at NYCC in 2010 and they have returned every year to bigger and bigger crowds this leads some to call NYCC “The convention that Walking Dead built”. We heard from some of the attendees that they’d been in line from 6 am that morning with doors opening for queues from about 9 am. Once fans had obtained their wristbands to gain entry to the panel to see Andrew Lincoln, Norman Reedus, Steven Yeun, Melissa McBride, Danai Gurira, Greg Nicotero and the rest of the cast and creators of the show many of them took to sleeping in the “Queue Hall” to get the best spot up front for the Q&A heavy panel. While the new series was described by the panel as “Real messed up” and season 5 “explores the darker reaches of the zombie apocalypse and what you need to do to survive”. This was evident from last nights tense dark and exciting season premiere. The panel itself was a love in between the cast and their fans. Andrew Lincoln proclaimed this is the best time in his life, he was later given a can of coke from a horse head wearing cos-player which he opened and drank and then mimed being poisoned. But it was Norman Reedus who had the creepiest moment of the weekend when one of the more ardent Daryl Disciples asked for the water bottle head been drinking out of at the panel. They took it all in good stride and with good fun. Season five of the Walking Dead should be a blast to watch given the premiere and we can’t wait to see the continuation of how their plight unfolds. 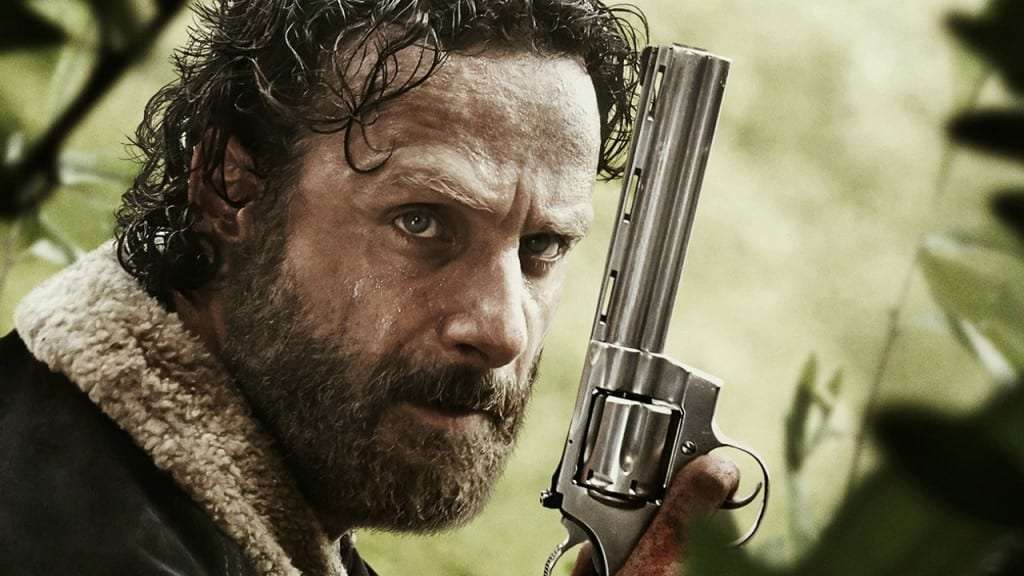 The exhibit hall was filled with NYCC exclusive statuettes and figurines, such as those at the Kotobukiya, tonnes of comics and collected graphic novels and every conceivable t-shirt and hoodie you could think of was there on sale. This was certainly where to spend your hard earned Dollars and seek out a rare comic book. In “The Block” area of the main exhibition hall, the exhibitors also brought underground pop culture from art, design, pop-tech together with their creators to add a different perspective to the experience. There was also the generosity of comic artists and writers down the Artist Alley, including Ireland’s Stephen Mooney and Declan Shelvey, as artists and writers they would pose for photographs, sign comic books, do on-the-spot sketches and if they could review upcoming or novice artists works. For me this is certainly the heart and soul of any Comic Con experience and NYCC 2014 is no exception. 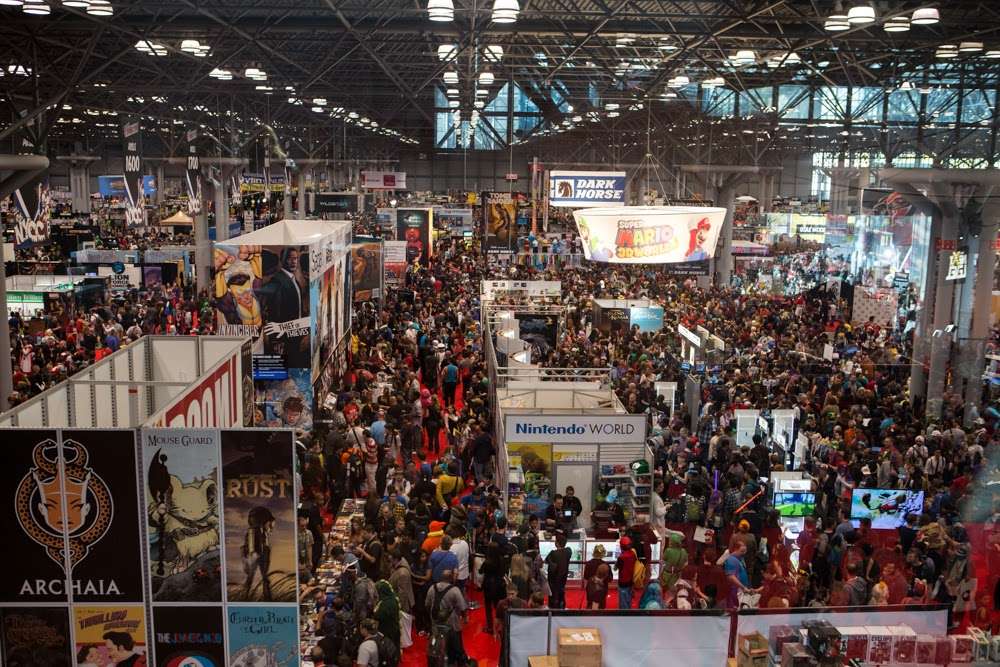 Finally there is also the honourable mention of all the NYCC staff who responded to all those with questions queries and needs and without doubt helped make NYCC the experience and success that it was in 2014.