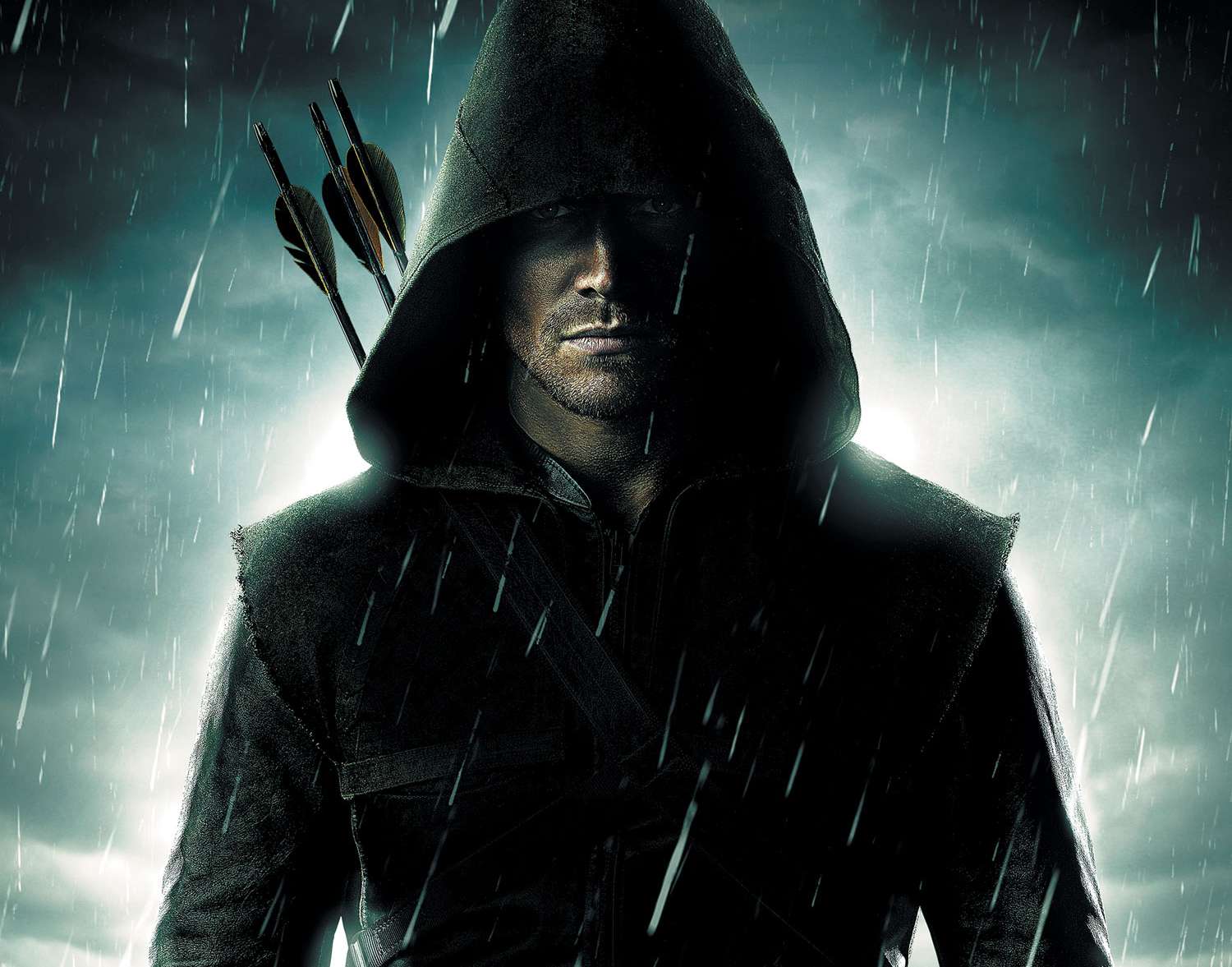 Arrow Season 3 Episode 1: “The Calm” Review. “At what price victory?“

Season three of Arrow returned with great anticipation following on from the climatic events from last season between the Arrow/Oliver Queen (Stephen Amell) and Slade/Deathstroke (Manu Bennett) and the lies that pushed Oliver’s sister Thea (Willa Holland) towards her father, Malcolm Merlyn (John Barrowman). The season three opener “The Calm” suggests that the dust has settled from the events and revelations of season two as Starling city along with its citizens enjoy crime levels that are at an all-time low thanks to Arrow and his team. However, all is not what it seems as the drug vertigo emerges back on the streets of Starling to haunt the Arrow and the mantle of the drug Lord, Count Vertigo, is taken up by a new protagonist or so we are led to believe. Behind these developments an older deadlier menace is set to assert himself on the city of Starling and catch the Arrow off-guard. The opener to Arrow season three twists and turns with some shocking events that lead to further tragedy for Oliver Queen. 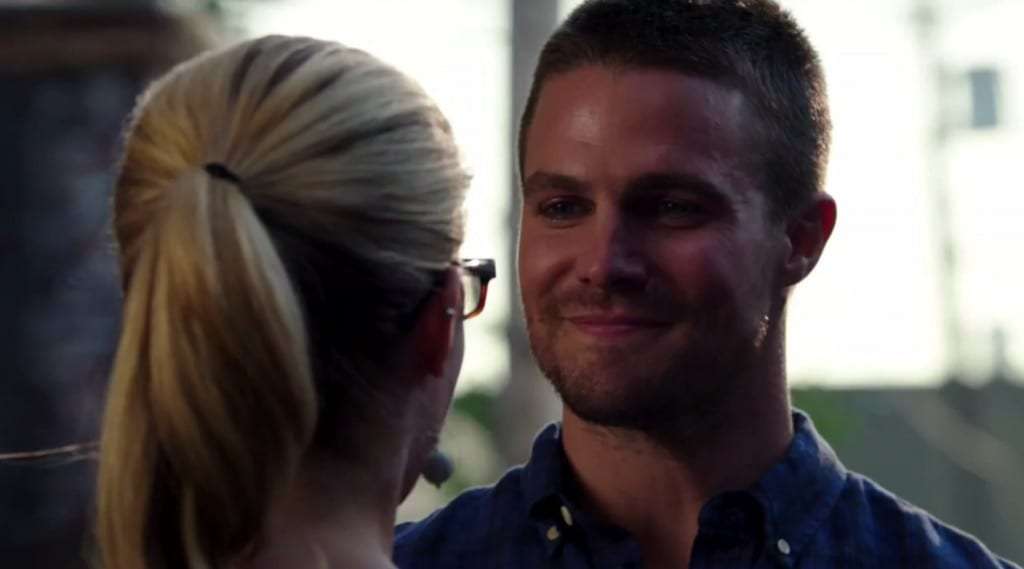 With the personal threat of Slade towards Oliver and his family over, we see a willingness of Oliver and his team to relax. John Diggle (David Ramsey) has his paternal duties to consider to his new baby as his partner Lyla Michaels (Audrey Marie Anderson), known as Harbinger, gives birth to a baby girl. It’s great to see Ramsey, a fan favourite from the series, truly take on the mantle of “Daddy Diggle”! Laurel Lance (Katie Cassidy) is also in a much better place. She has kicked her addiction and is building bridges with her sister Sara Lance (Caity Lotz), the Black Canary, and her father Quentin Lance (Paul Blackthorn) who has been newly promoted to Captain at Starling City Police Department. His first act in office is to cease the warrant for the arrest of the vigilante known as Arrow. 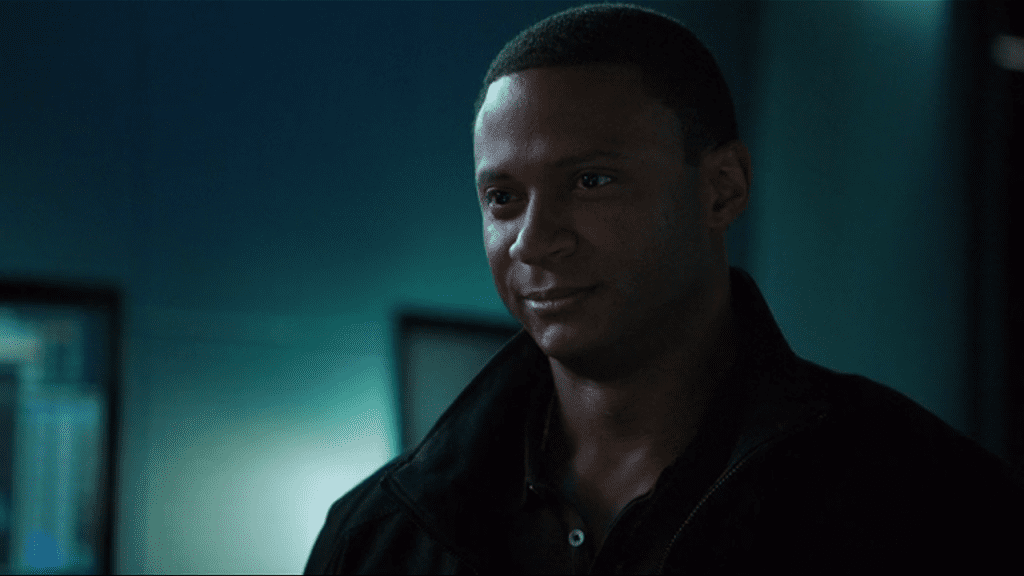 As calm quite literally descends even over Oliver, he begins to achieve a balance between being both the Arrow and Oliver Queen. He seeks to put an end to the romantic tension that has built up between him and Felicity (Emily Brett Ricards). It is a really nice touch to the first episode to see him and Felicity break the ice as Oliver asks her out on a date (Olicity anyone?). However,  Felicity may also have another admirer, Ray Palmer (Brandon Routh), as they very much seem to be on the same wavelength as one another in a tech-savvy kind of way. Brandon Routh plays Palmer really well and it’s a great performance in his first outing of season three. He gels with the character’s relaxed demeanor and charm. There is a sense of fun about the character with an easy sophistication that is great. It makes me excited to see more of his character over the season as he develops to become a well known DC character and especially as he is revealed to be in competition with Oliver for control of the bankrupt Queen Consolidated. 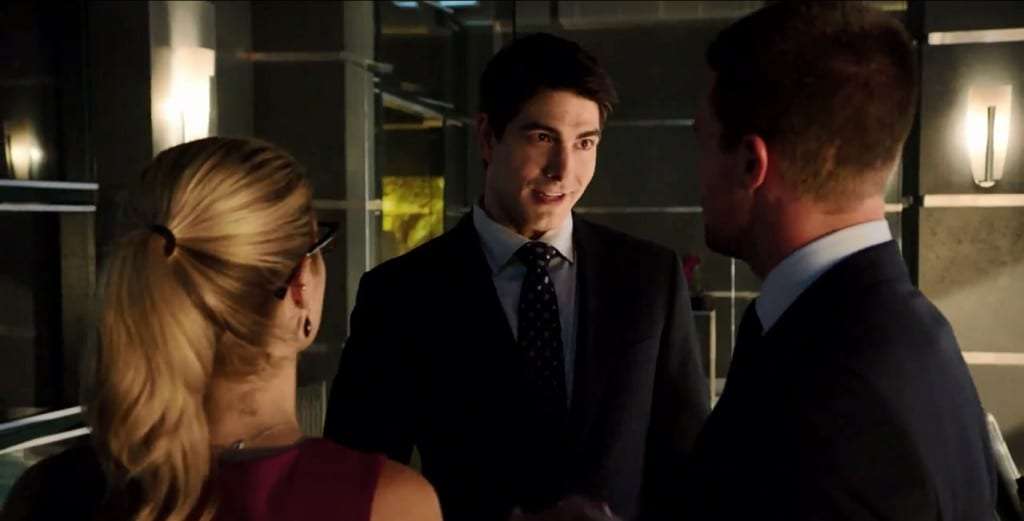 The grab for Queen Consolidated by Palmer, the concern of Roy Harper (Colton Hayes) for Thea his missing former girlfriend, as well as the health of Captain Quentin Lance are hints that all is not as settled as we were led to believe. Indeed, in flashbacks to Hong Kong, we see Oliver Queen under continued coercion after escaping the Island; as he is forced by Amanda Waller (Cynthia Addai-Robinson) under the threat of killing the family of his handler, Maseo Yamashiro (Karl Yune), to proceed with training for an as yet unknown objective. These new flashbacks are a welcome and timely change to the flashbacks to the Island called Lian Yu. Whilst I look forward to the further pieces of the puzzle these flashbacks will reveal about Oliver and his past I do wonder (and worry) about the merits of over using this technique as the series moves forward. 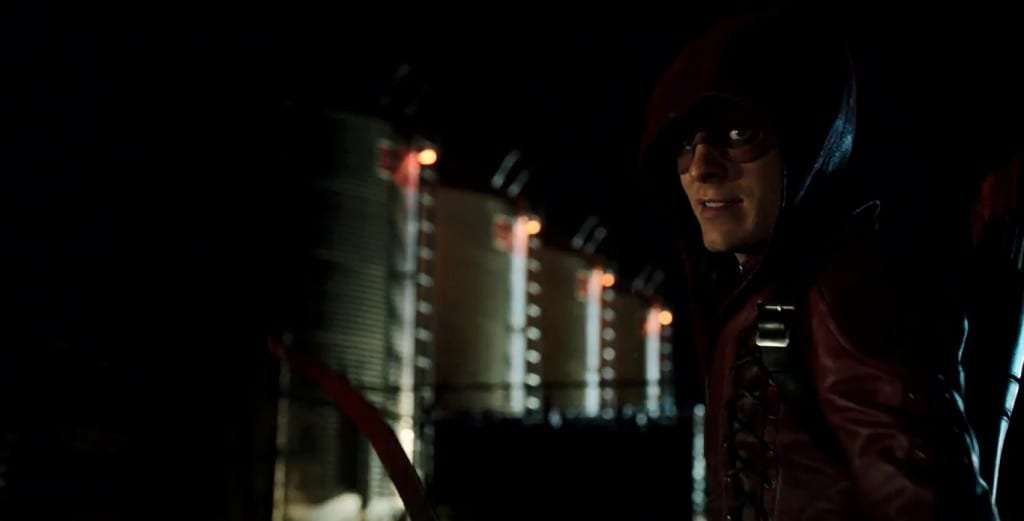 Roy Harper steps up to fully take on the mantle of The Arsenal in his full costume that is nicely red (I still prefer the idea and name Red Arrow for this show) and awesome, especially as in a great little moment the Arrow calls him “partner”. This entrance is not a moment too soon as the veneer of safety and calmness is brutally removed from Starling City and for Arrow and his team with the arrival of Werner Zytle (Peter Stormare), who has claimed the mantle of Count Vertigo. Zytle attempts to kill Arrow, in a bid to cement his control over the streets of Starling, but fails thanks to the help of The Arsenal and Black Canary (aka Sara Lance) who is back in town. But collateral damage in these attempts by Zytle comes in the form of Felicity as she is seriously injured, re-igniting doubts in Oliver’s mind about his ability to mix the personal with the professional (vigilantism). These encounters though lead to some great stunts and action sequences in this opening episode. There is a particularly good Oliver versus Oliver sequence as Zytle, through a cocktail of the vertigo drug, shows Oliver to see who he fears the most – himself! 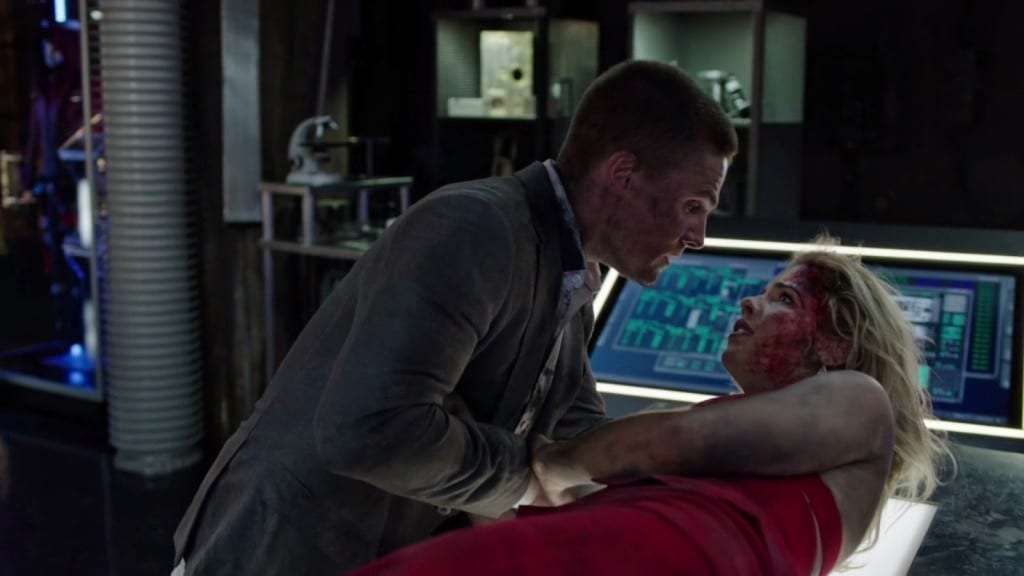 But a potentially greater menace lurks in the shadows of Starling City, one that has serious consequences for a strong and close ally of Arrow. The closing sequences of episode one certainly begins to explore the tragic consequences at the end of season two and the theme for season three “At what price victory?”, as Sara Lance is shot in the chest with three arrows by an unseen figure. She falls from a rooftop to her death in front of a shocked and traumatised Laurel (and audience). Who is this mysterious figure? Could it be the return of Malcolm Merlyn, the Dark Archer, to Starling? Or is it a more ancient foe in the shape of Ra’s al Ghul? Indeed is Sara Lance really dead? These are some  great questions that have been set up at the start of Arrow season three and I can’t wait to see them play out. 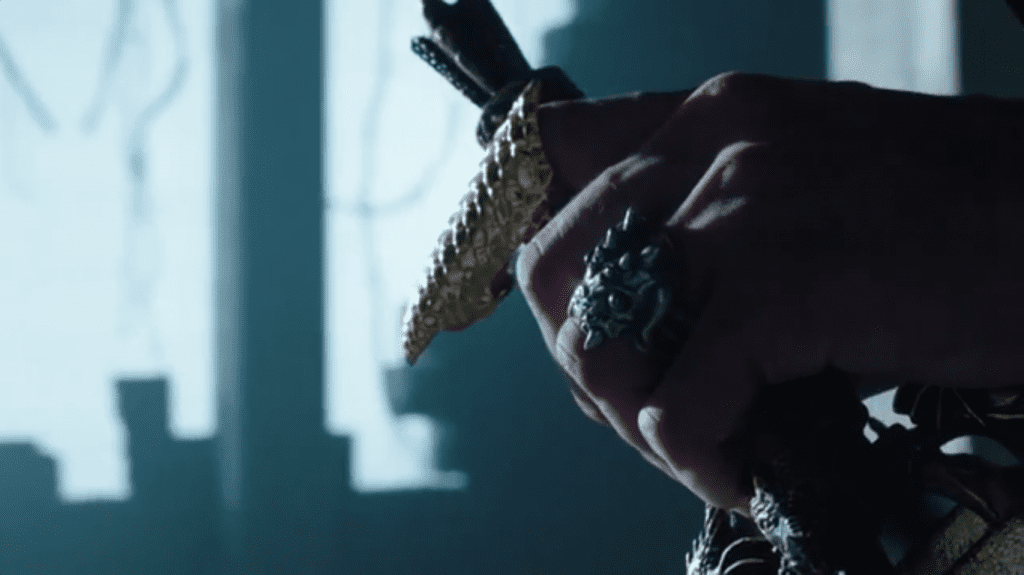 Overall, this is an excellent episode of Arrow and a solid start for season three. The episode began to shape the start of a new piece to Oliver’s back story in Hong Kong. Despite the episodes title – The Calm – the victory (or perceived victory) from last season has been flipped as new criminal forces are on the horizon. These new foes bring a real sense of danger to Arrow and his team which is a nice change. The writers also introduce us to the start of a great new line up from the evolving Roy Harper as Arsenal  to the new man in town Ray Palmer played by the excellent Brandon Routh. We also get, hot on the heels of the series premiere, a cameo appearance of Barry Allen (Grant Gustin) as he seeks advice about what to do with his new found powers. This cameo also helps set up the links between the worlds of The Flash and Arrow that inhabit the same universe. We’ll see more of this in a two-hour cross-over in episode eight of both shows and also in episode four of The Flash as Felicity makes her way to help Barry Allen in Central City. As always where would this new season of Arrow be without Stephen Amell, he really does provide the core to this show as Arrow. We can’t wait to see how he will protect Starling City, deal with his missing sister and of course, what really happened in Hong Kong. 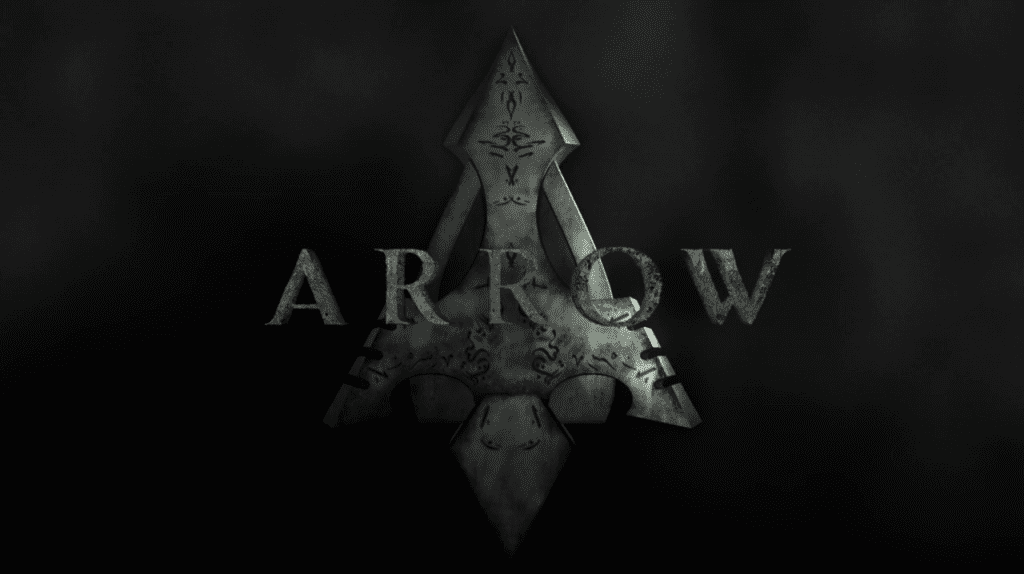