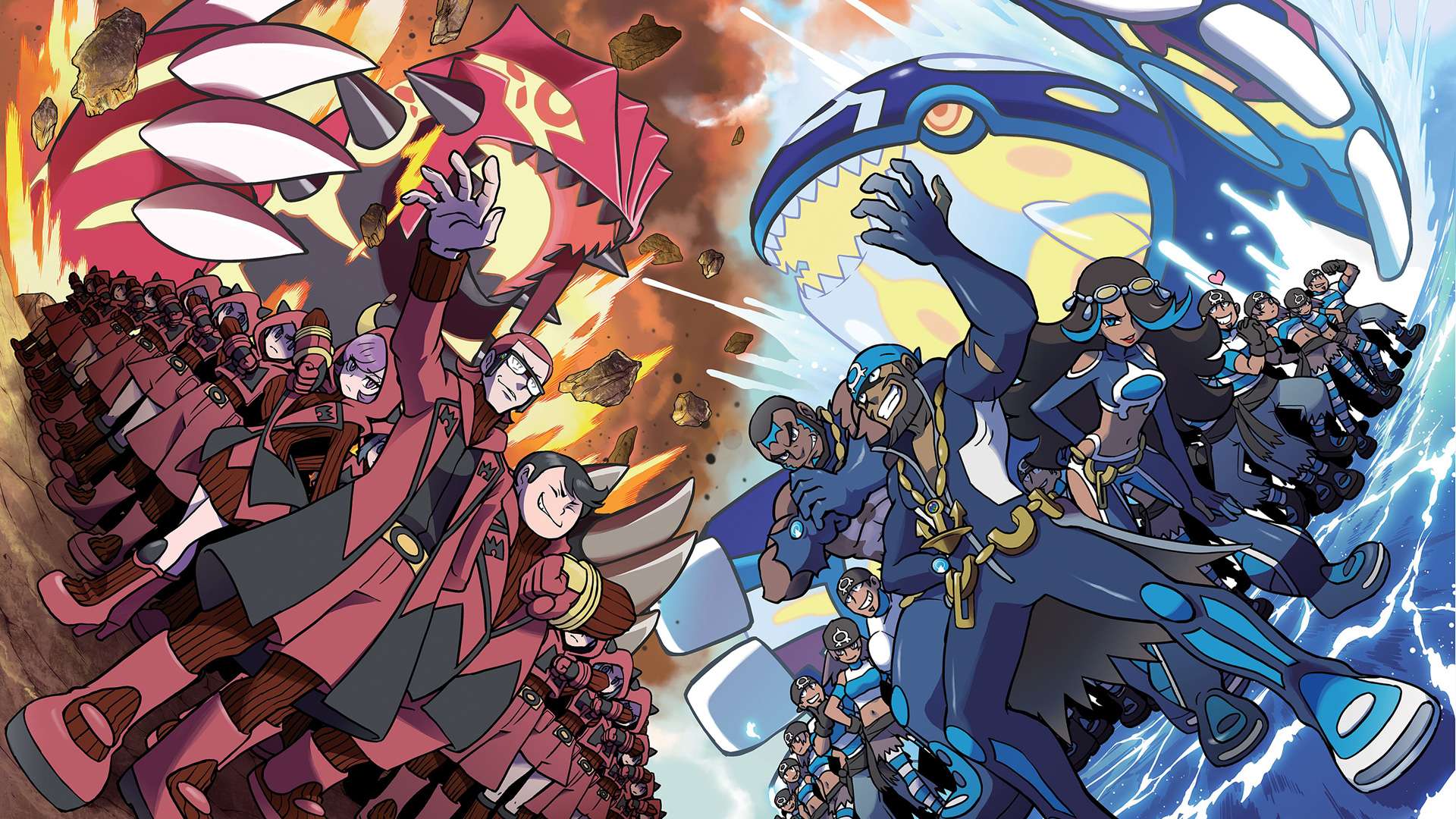 For anyone not in the know, Pokémon is a Game Freak developed, Nintendo published, force of nature the likes of which anyone growing up outside of the 1990s, like, couldn’t, like, possibly understand, dude. That is certainly not to say the popularity of the series has dwindled, Nintendo is still making these games and therefore, in accordance with the laws of capitalism, it must be selling well. It is currently Round 3 of the Pokémon remakes, something which on the surface may appear to be a cheap cash grab but don’t be fooled, this is quite an expensive, well polished cash grab. Following on from Fire Red & Leaf Green and Heart Gold & Soul Silver we meet Alpha Sapphire & Omega Ruby, based on Ruby & Sapphire the best-selling games for the Gameboy Advance. The main difference between Alpha & Omega is the legendary Pokémon you can catch, as well as the antagonists you must defeat; Alpha Sapphire has pirates in the form of ‘Team Aqua’ and Omega Ruby has moody scene kids in the form of ‘Team Magma’.

These new versions are from the Sixth Generation of Pokémon for Nintendo handholds, and that information is significant to those still in possession of X & Y, who may trade Pokémon between the two (or four) in person, or over the Global Trade Station (GTS).

There is also Wonder Trade which allows the player to trade randomly with people around the world. Don’t throw Wingulls or Lotads into the WT looking for legendaries, the bad karma will haunt you forever.

Pokémon is a dense game, and approaching the series is about as daunting as deciding to start getting into comics; there is much required reading. Even seasoned Pokémon players need a move chart at hand to see what moves are effective against what types and if that sentence made you mouth the word “whaaaaa…” the tutorials of this game are actually pretty motherly, and will gently hold your hand through the first few towns and gym leaders. Then it abandons you in the ash-covered mountains with no immediate means of escape. Pokémon, like life, has harsh realities for you to face.

If you’re new to Pokémon here are the tips:

Catch one of everything you meet

If you can’t catch it, kill it

Talk to everyone, even that old guy in the trenchcoat hanging out in front of the pre-school, he’s cool, I swear

Sneaking up on Pokémon like a GOD DAMNED NINJA

As was previously mentioned this is a remake. A remake can differ from a sequel in many ways but often, in the games industry at least, a “HD Remake” means graphical improvements and rarely much else. However, when Pokémon gets remade it’s not just to beef up the models and animations, but to add some gameplay. And this is about the point where things get awkward: what to leave in/remove (Legacy) and what to add (New Feature). Right off the bat there are 7 HMs (Hidden Machines), up 2 from X & Y’s reasonable 5. Hidden Moves are field moves taught to Pokémon, meaning they can be used in battle as well as while exploring. Some moves like Surf, Strength and Fly are sweet moves in and out of battle, but then their unfortunate brother Rock Smash rears its ugly head. The catch with HMs is they cannot be replaced with other moves whether from TMs (Technical Machines) or moves learned from levelling up, they can only be deleted by the Move Deleter. Think of HMs like tattoos; you’ll need a specialist to get it removed. 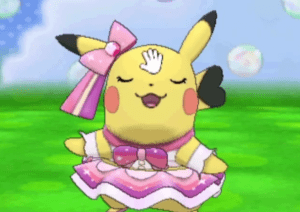 The GTS, Pokémon Amie and Super Training apps are still available from the DS’s touchscreen as well as an amazing new feature, the DexNav, which shows you what Pokémon are available to catch in the area, and informing you when you’ve caught all of that area’s Pokémon. This is the feature which shows you there are Pokémon in the area that can be crept up on, as well as giving you Pokédex entries for Pokémon you meet out in the open with their trainers. 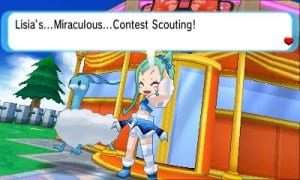 Back with a vengeance is the Pokémon Contests in which you compete against other trainers to determine who is the Toughest, Cleverest, Cutest, Coolest or most Beautiful. Whether you find this concept appealing or not is irrelevant because from taking part in the contest you receive a costumed Pikachu, which will be given a different move based on which costume it is wearing. 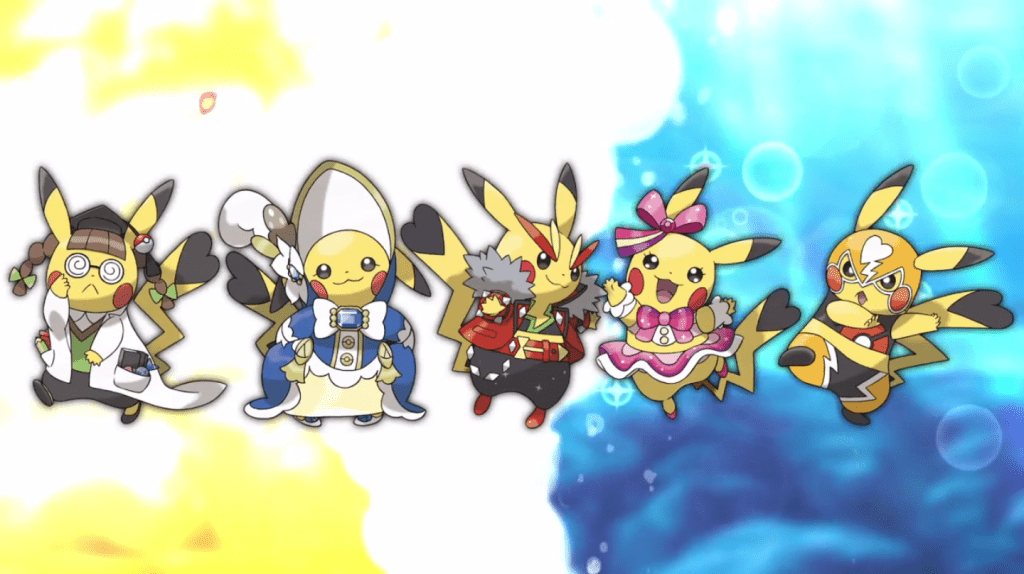 Yes it will wear these at all times even in battle

To those who have never gotten into the series the learning curve is deceptive. At a glance it seemed nothing more than a reverse RPG wherein you the player do not level up but instead your monsters used for blood sport do. However, if one were to, say, search for information on EV training or Pokémon breeding the information overload would probably lead to one’s head exploding. But enough horror stories, let’s relive that narrative, shall we?

Within seconds of pressing start the game is already blowing my mind. We see a screen with a Pokémon Professor, that breed of human in the Pokémon world that sees it as their anointed duty to send 10 year-old children into the monster filled woods with an element-spewing zodiac animal in tow. Then, reality shatters as it is revealed your character has been looking at this image on their Pokédex, eerily reminiscent of the GameBoy Advance SD. Brecht would be proud. Next you learn that your neglectful mother has left you in the back of a moving van as you arrive in a new town. No wonder I’m about to run away from home.

This town is called Littleroot. Get it? Because small beginnings metaphor.

After some delightful product placement for the Wii U, being harassed by the neighbour kid, and mashing A at every object in sight I hit the one that gives me my first Pokémon, and I choose the one that belches fire. May the grinding commence.

Next stop is the nearest Pokémon centre, Hoenn being civilised enough to have universal health care, which I am traumatised to learn, just like the original Ruby & Sapphire, has no PokéMart in it. The Legacy white-character-only option was embarrassing, but this is just asinine. Town planning permission must be awfully complicated to acquire in Hoenn. The developers retrofitted the story with Mega-Evolutions, which would not appear chronologically until X & Y, yet I can’t get a Pokémon Centre with a PokéMart in it. Flawed design choice is flawed.

Regardless, there’s still so much to do in the game and even more to learn. Pokémon can have abilities that they are born with, they can hold items to give them other abilities, and learn moves which all have a circumstance under which to use them. One move in particular, Secret Power, allows the player to create a secret base in trees, rocks and other places, creating a base of operations where they can stare at toys or have a rest. 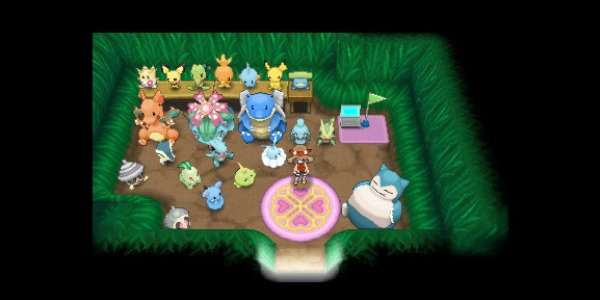 This was definitely one feature of the original Ruby & Sapphire that I sorely missed in the Pokémon games that followed. In the rest of the series there never truly was a home for the player to make their own and decorate and now apparently you can have friends over. If I had friends I’m sure they’d be impressed with my study area and giant novelty globe.

Whether you are the type of player that does indeed want to catch ‘em all, or explore to the four corners of the map, raid every underground and mountain cave, or cover your contest Pikachu in ribbons, Alpha & Omega are welcome additions to the Pokémon family. It plays well, it looks great and I’ll forgive the Legacy rubbish because of DexNav and Secret Bases being so terribly, terribly amazing.

This review was done by TheEffect.Net contributor, Molly O’Grady.