History has always played an important role in the Assassin’s Creed series. So far, fans have experienced the Crusades, the Renaissance, the American Civil War and the age of Pirates. Through real-life events you would normally learn why the Assassin’s and the Templars are at odds and more about the pivotal characters in the series. However, Assassin’s Creed: Rogue is slightly different. Instead of focusing on the real-life events, it focuses more on the history of the series itself.

Assassin’s Creed Rogue is set during the seven year’s war which took place from 1756 to 1763. You play as Shay Patrick Cormac, an Irish assassin under the tutelage of Achilles Davenport. Shay is quite insubordinate, much to the frustration of his mentors, so Achilles decides to give Shay a more active role in the Brotherhood. Without giving too much away, it is these ‘tasks’ that Shay begins to question the Assassin Order.

In contrast to earlier Assassin’s Creed titles, Shay’s role changes during the game and without spoiling anything, it’s an incredibly refreshing change. Another nice added touch is that you meet some familiar faces from previous AC titles including: Adewale, Achilles and Haytham Kenway. Of course these names won’t ring any bells if you haven’t played Assassin’s Creed 3 or 4.

Similar to previous titles, make sure to expect some modern-day sequences from time to time.

AC Rogue plays very similar – if not identically to – Assassin’s Creed: Black Flag. The combat system is the same, with countering attacks as seamless as before. All the mechanics associated with free-running is a carbon copy of previous titles on last-gen consoles. The map itself is huge. At first, I did not think that the locations were in any way expansive, but many of them merge into one. This allows for hours wasted on travelling to the various locations dotted around, without even the need to complete the story if you don’t feel like it.

Similarly to AC: Black Flag, sailing plays a pivotal role to exploration and story-telling of the game. You captain a ship called the Morrigan, which is faster, smaller and more agile than the Jackdaw. You also have the opportunity to explore the River Valley and North Atlantic. Personally, the North Atlantic is an added touch with the need for an ice breaker ram to charge through an ice-sheets that you encounter. You also have icebergs floating about, which can be used to your advantage when fighting enemy ships. Another difference made to Rogue is that other assassin ships will ambush and charge at you, boarding your ship. This is a nice twist to the naval gameplay that we are used to from AC: Black Flag. 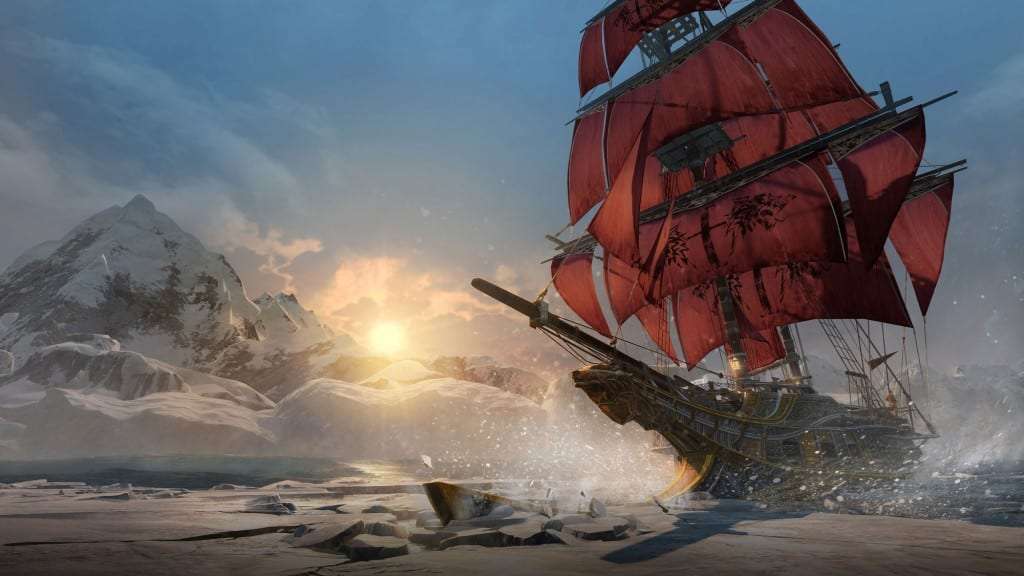 For those who may have dabbled on the multiplayer side of Assassin’s Creed, they would know the purpose of this compass. You are now hunting assassins so this will allow Shay to effectively pin-point the location of his hidden targets. In addition to hunting assassin’s you also are being stalked. You know this through the whispers you hear as you draw nearer to your stalker. Again, the compass will help you find the target and take them out. For me, this filled the void of not having multi-player with Rogue.

Customisation of your ship and of Shay is present with the usual crafting options available for particular upgrades and outfits. There are also new weapons present, thanks to the ingenuity of Benjamin Franklin. Hunting and harpooning also make a comeback with new arctic animals available to skin. I managed to harpoon a Narwhal and kill a Polar Bear, so there is always something new to find. 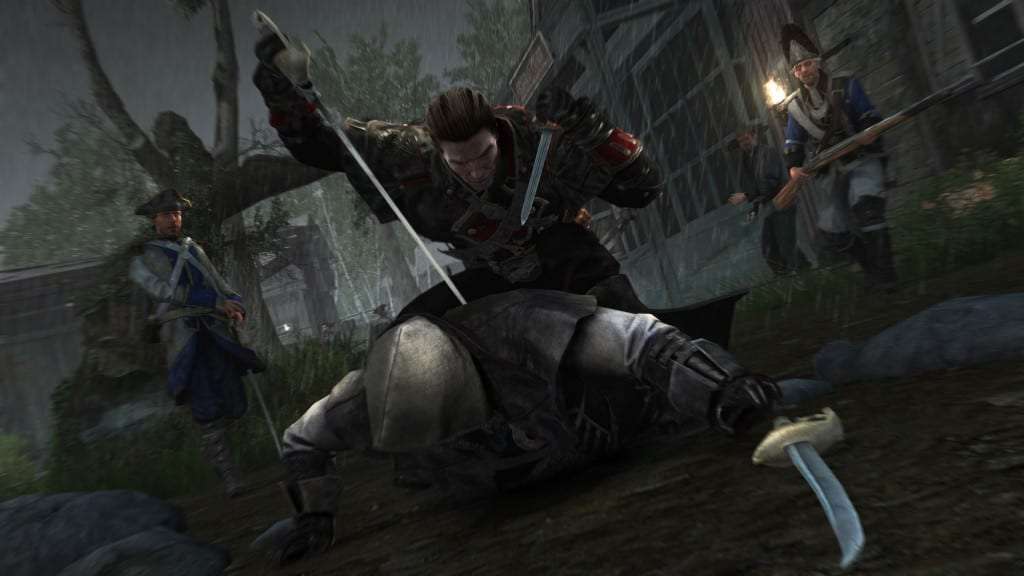 Collectibles are plenty in AC: Rogue, with numerous Templar maps to locate across New York, River Valley and North Atlantic, totems to decipher, supply convoys to exploit, naval convoys to sink, prisoners of war to save, Viking sword fragments to find, blueprints to locate and the usual animus fragments, treasure chests, shanties and assassination contract interceptions. There is also the return of renovating the various locations that you liberate from the French – including naval forts and gang hideouts, which brings back the old times of Ezio and his villa/Rome.

The other day I was sailing through the North Atlantic and darkness fell. I looked up at the sky and saw the blues and greens of the Northern Lights. I looked down and I saw a group of Penguins by the water’s edge, diving in at any sign of movement. To the right I saw my ship, the Morrigan and to the left a Polar Bear circling around a chest that I intended to collect.

AC Rogue would be one of the prettiest games I have ever played on the last-gen, with the attention to detail being second to none. With most of the graphical imagery looking a lot like AC: Black Flag, it is hard to imagine that Rogue would be any better, but it is. 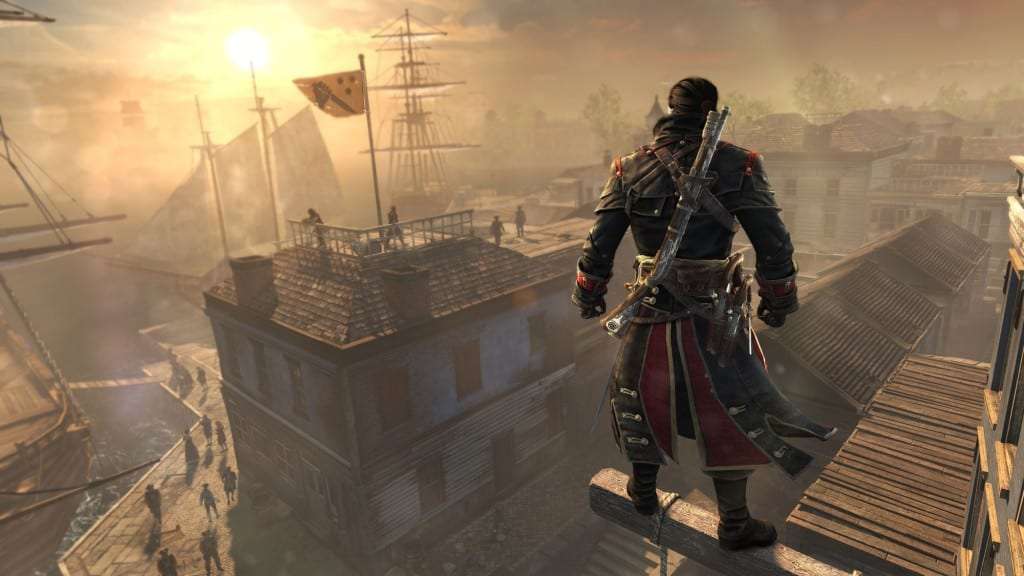 The graphics in this game are spectacular. Utilising the same weather changing systems that were first introduced in AC3, sailing through a blizzard where your deck becomes covered in white snow is something to marvel at. The detail put into the buildings of New York and the nostalgia felt when I was solving puzzles in Lisbon cathedral, just sent chills down my spine. Simply being indoors again, with the stained glass windows and the lights shining through depicting their image on the ground below…. Well it made me remember why I love these games so much. In addition, the added touch of the screen freezing as you swim through freezing water or drops of water when under a waterfall makes you relate more to the surrounding environments of the game. It’s a fantastic end to the previous generation.

Without a shadow of a doubt, Rogue has one of the most compelling stories of any recent Assassin’s Creed game. It changes the way in which we look at the conflict between Assassins and Templars. It gives us a new perspective to look at events in the timeline and it’s arguably a lot more informative than Unity. However, Rogue is not without its flaws. It does become quite repetitive, with the gameplay very similar to AC: Black Flag and can feel ‘samey’. You need to pay attention to what Ubisoft have added in Rogue to avoid that feeling of treading old ground. That being said, the new locations and introduction of an Irish protagonist means that it has already got thumbs up from us. In fact, if you care more about story and loved Black Flag’s naval mechanics, then it’s better than Unity.

If you are a fan of the series then I would recommend you pick this up, just to tie in between the stories of AC: Black Flag and AC3. If Unity wasn’t for you, we’d suggest you pick Rogue up and it will reignite your love of the series. It’s a fantastic swan-song to the generation of old and something that should be in any Assassin’s Creed fan’s library.