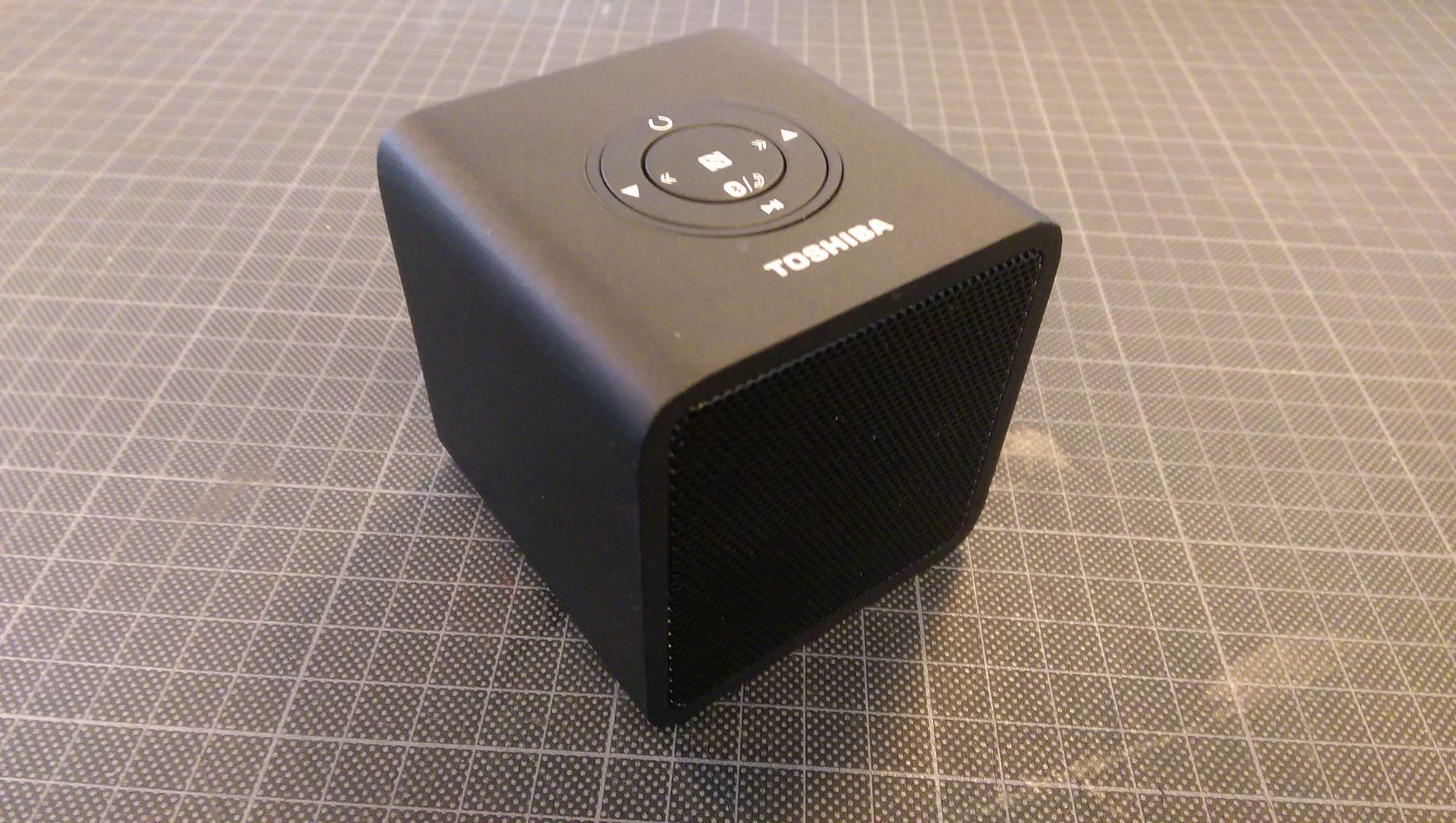 So it’s been a while since we got our hands on a decent wireless portable speaker that’s worth its salt but the new Toshiba TY-WSP52 packs some punch for its unassuming size. In its inoffensive little footprint, which is just a little cube really, the speaker has a lot to offer. Read on to find out what we thought of the Toshiba TY-WSP52 portable wireless speaker.

The Toshiba TY-WSP52 is the little brother to the larger TY-WSP54 speaker and weights quite a bit less. Don’t let that fool you though, this little speaker is well able to hold its own. With measurements of just 72cmX72cmX72cm, it’s the definition of ‘extremely portable’ and weighs just 273g. 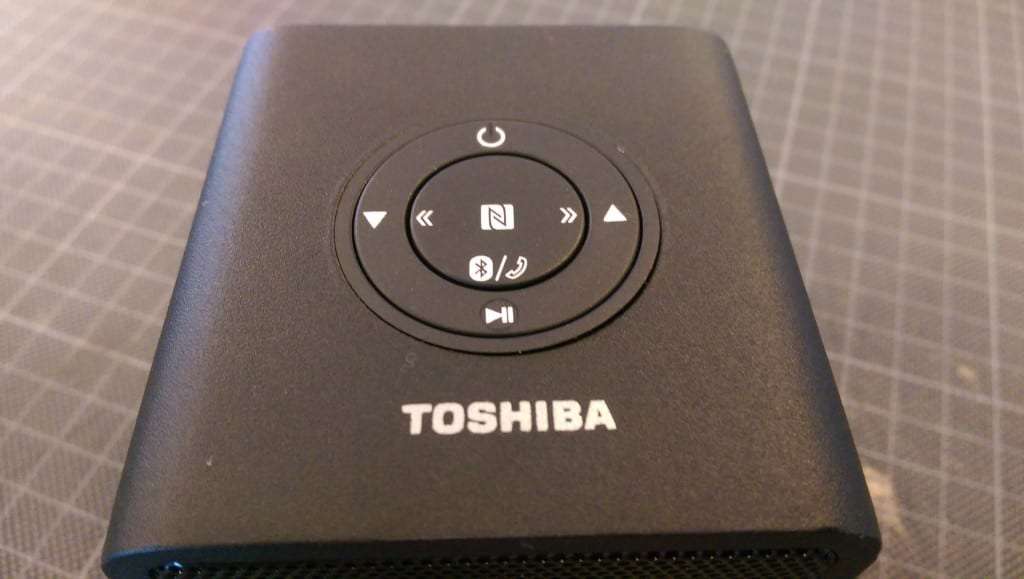 The main input for the device is Bluetooth (hence the word ‘wireless’ in the title) but you can also use a 3.5mm audio cable to send your music to the speaker also. You can connect to the speaker via NFC also which is extremely handy, all you have to do is tap your NFC enabled device to the speaker and it’s connected in a matter of seconds with some reassuring connection sounds.

The audio quality for the device is extremely impressive and clear given the speaker’s petit dimensions and it even has a little ‘subwoofer’ hole on the back of the device to add some depth to the audio. We were able to connect both our HTC One M8 up to the device and then our laptop with no issues and we were listening to music off it in under 30 seconds, it’s just so easy to use. 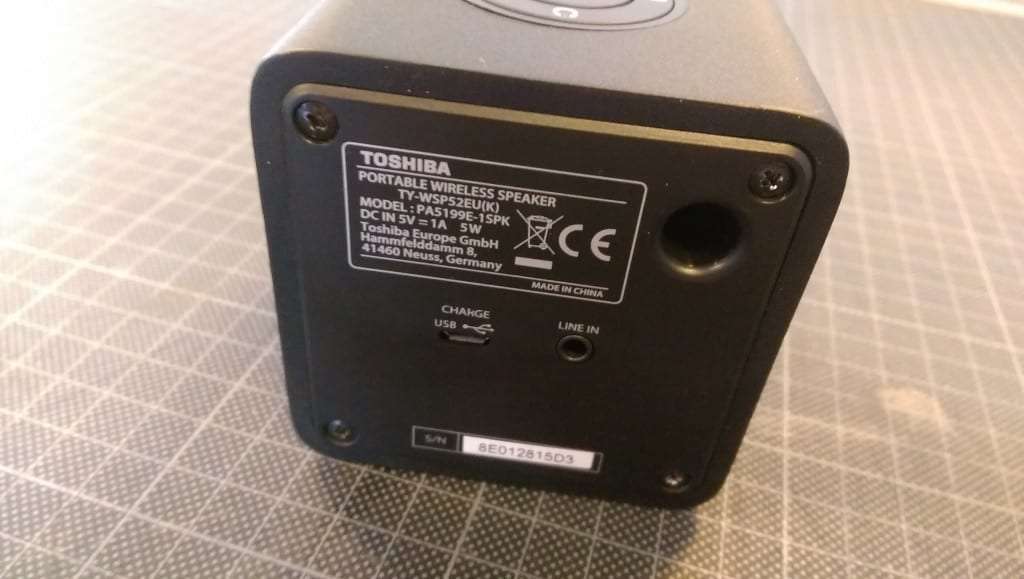 In terms of battery life, this little speaker is able to give you 13 hours of music at 50% volume which we were amazed to hear and even more amazed to fine out this quoted time was real! Being honest, we didn’t leave the volume at 50% all the time but we easily got 10 hours of playback out of it before we had to charge it again. Speaking of charging, the TY-WSP52 also charges via micro USB (the same charger your android phone/tablet uses) and comes with a ‘USB to Micro USB’ cable as well.

The TY-WSP52 also comes with a built-in mic for handsfree phone usage which is very handy if you want to have a conference call rather than having to disconnect your phone from the speaker to take a call, which is obviously and option also. 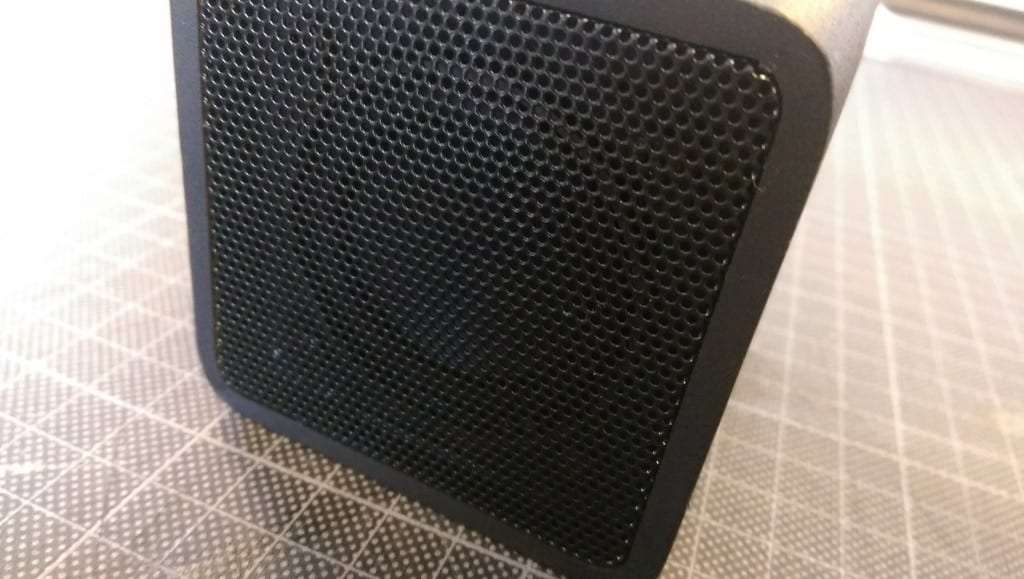 The model we tested was the black version but there is also a white and wooden finish style too. The best thing about all this though is the price and the Toshiba TY-WSP52 is retailing for around €55-€60 which a a great price for such an impressive little speaker, we really would have no issue recommending this little guy to our friends.