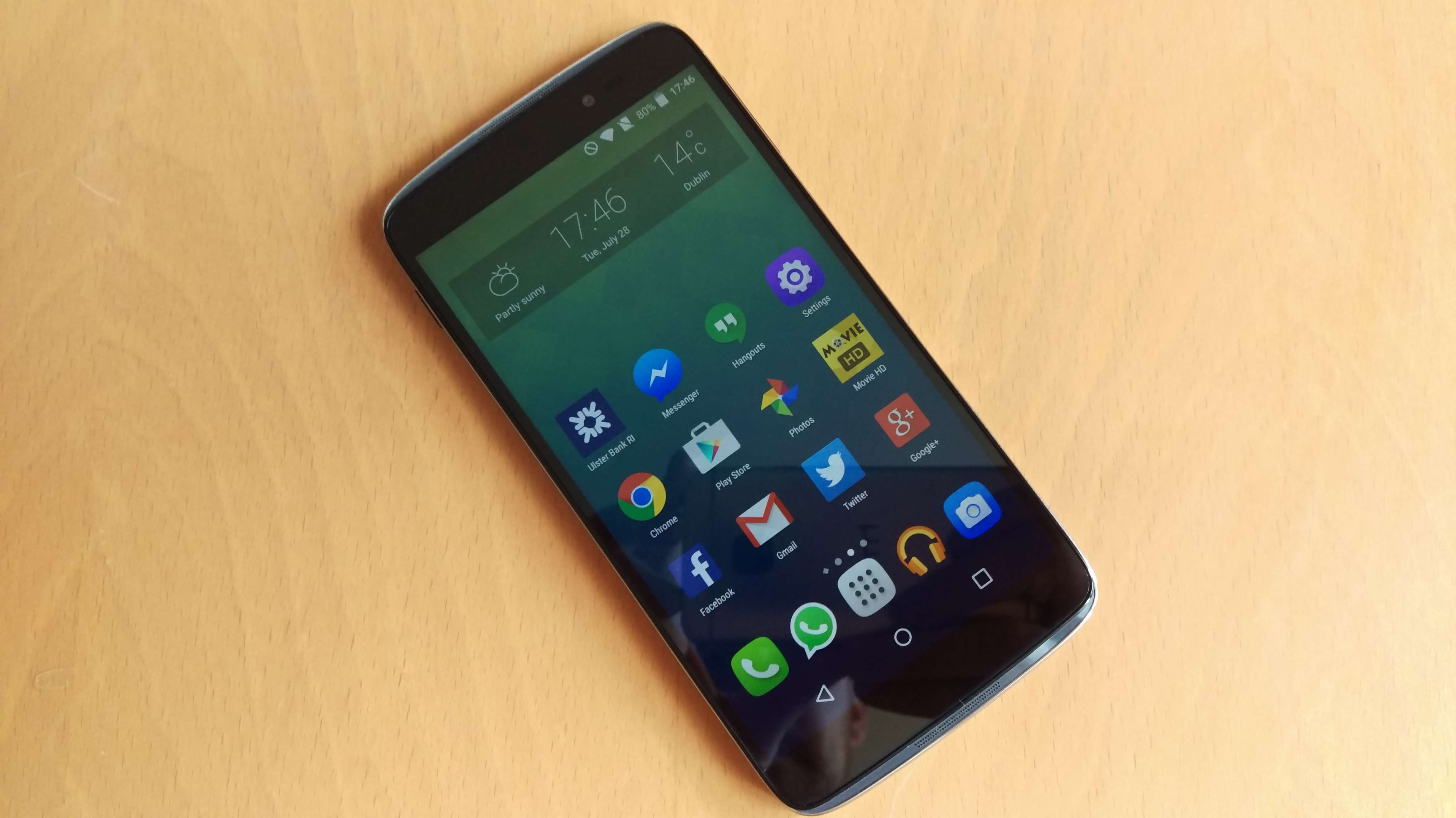 Having just arrived in Ireland this month, we were extremely excited to get some serious hands-on time with the new Alcatel Onetouch Idol 3 smartphone. This particular instalment in the Idol comes in 2 screen sizes, 4.7″ and 5.5″ and it was the latter, larger edition that we got to test out. With its eyebrow-raising starting price point of just €249, can Alcatel deliver a phone to compete with the big boys? Read on to find out.

To many, Alcatel is a brand which has flown under many people’s radars with the likes of the Apple and Samsung heavyweights stealing most of the limelight but their now on a mission to make a name for themselves in the cut-throat world of flagship smartphones. That’s were the brand new Alcatel Onetouch Idol 3 comes in. Coming in two variants, the 4.7″ and 5.5″ screen sizes are in direct competition with that of the iPhone 6 and iPhone 6 Plus. 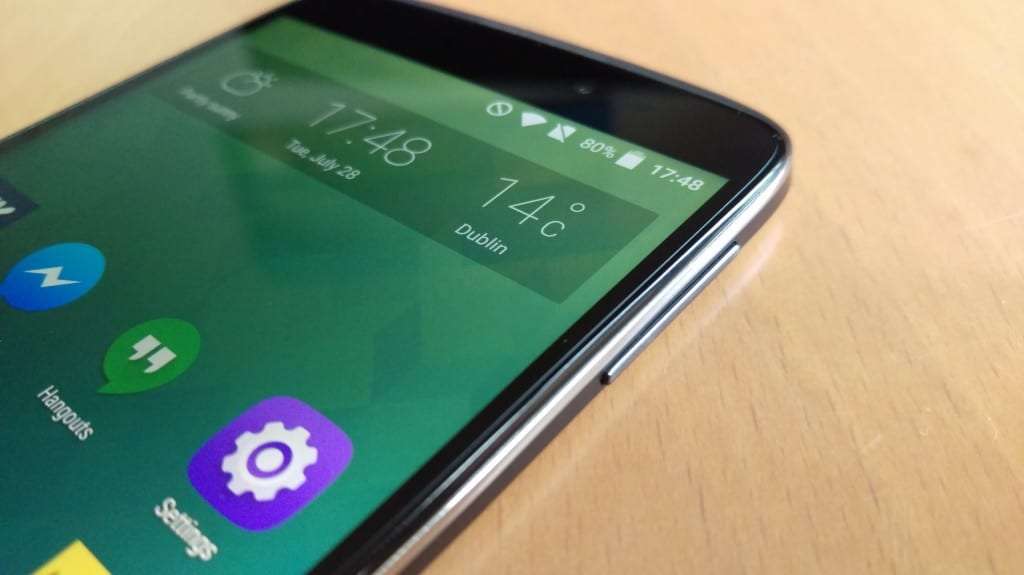 Noticeably more compact than both of these phones, the Idol 3 has a very attractive design with an all glass front with an 8MP front facing camera, flanked by some extremely impressive JBL tuned stereo speakers, a chome trim with the volume rocker on the right, power button on the left along with the micro SD and sim card slot. 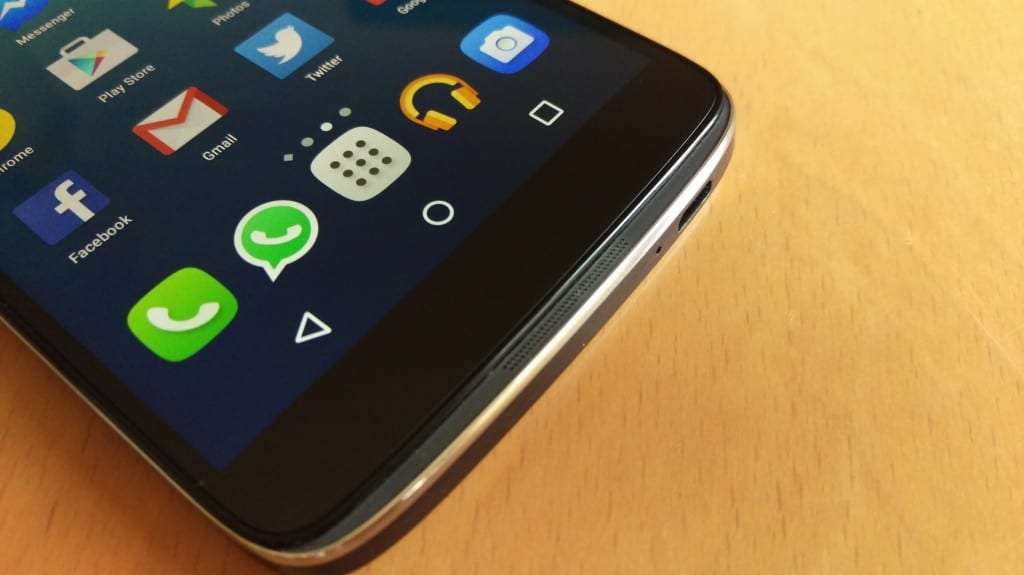 The headphone jack can be found on the top with the charging port on the bottom. The back of the device has a hairline-brushed finish which adds a bit of style to the device. The 13MP Sony sensor camera is in the top left hand corner and is thankfully flush with the device. 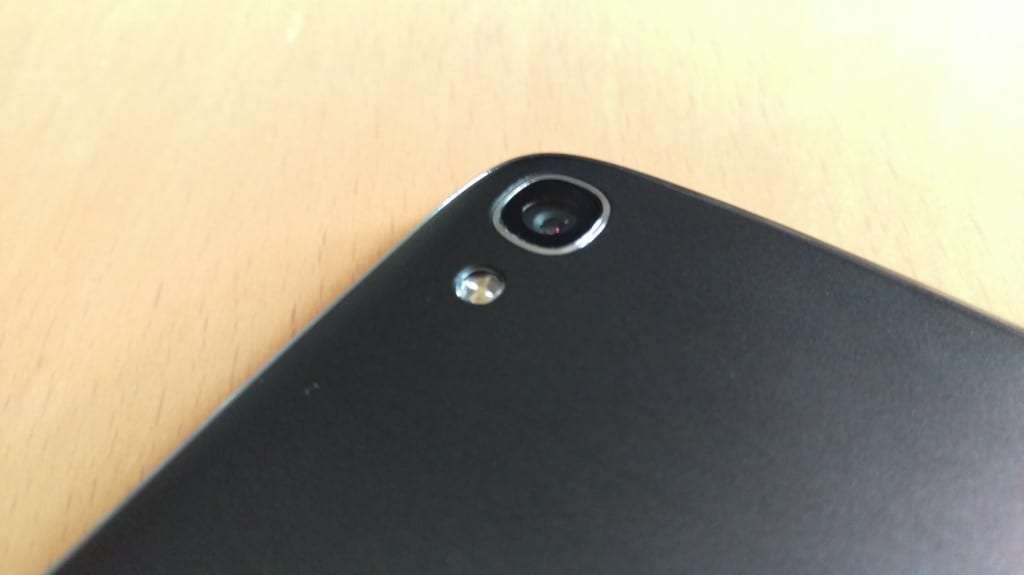 One thing which we find difficult to understand though is why exactly they decided to put the power button on the upper left hand side of the device. Being the 5.5″ version, the device is already somewhat hard to handle for those of you with smaller hands but having the power button in this location really doesn’t make any sense. This issue aside, the build

The 5.5″ Idol 3 has a Full HD 1080p display with what Alcatel are calling ‘Technicolour Colour Enhance’ screen and a PPI of 401. With the likes of Samsung and LG coming out with 2K display in the same screen sizes, many might think they are being left behind in the ‘resolution race’ by getting 1080p display on such a large device but that simply isn’t the case. With a PPI of 401, the Idol 3 does a fantastic job of displaying even the finest of detail. Viewing angles are great and with an extremely impressive 700+ nits in brightness, you should have no problem using this device in direct sunlight. 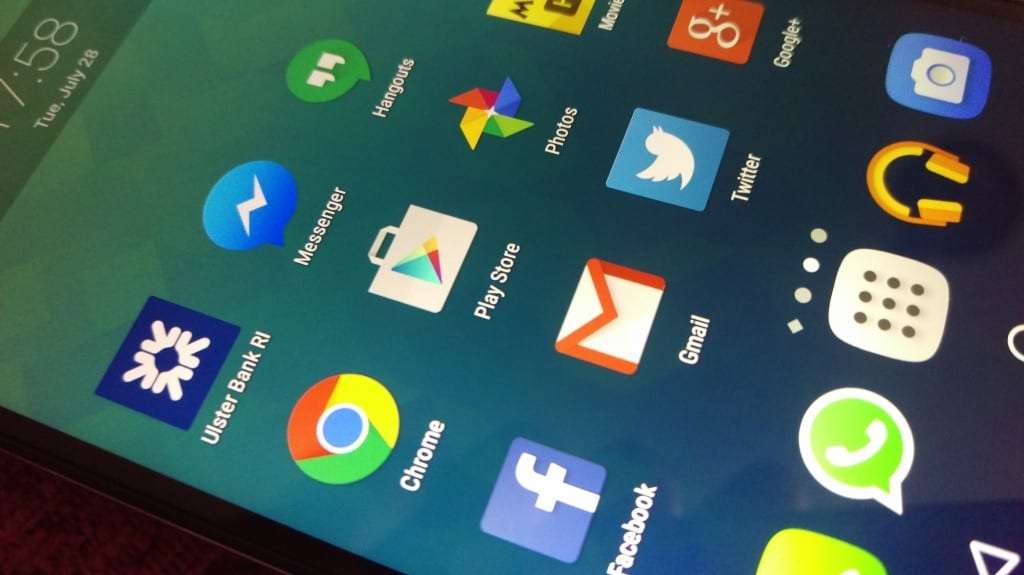 The Idol 3 runs Android 5.0 Lollipop out of the box and has an extremely thin skin sitting on top of the whole experience, this is as close to stock Android as it gets. You get the familiar Lollipop drop down notification panel, easy-to-navigate settings menu and a streamlined camera experience which adds just enough to the somewhat bare offering in stock Android. 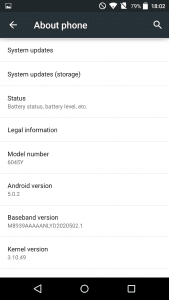 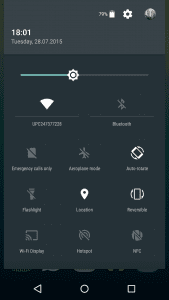 Under the hood is a Qualcomm Snapdragon 615 quad-core processor and 2GB of RAM which is more than enough to handle the majority of tasks. A few areas we did notice a tiny bit of lag was during graphics-intense gaming sessions and bulk app closing but overall, these hiccups were few and far between.

Once extremely cool feature which plays into both the hardware and software side of things is the fact that the phone can be used upside down, even for taking calls as there is both a speaker and microphone on either end of the device. Thankfully, due to its design being symmetrical, this is actually something we found ourselves using on a daily basis and would love to see implemented into other smartphones in the future.

The Idol 3 has a 13MP Sony sensor on the back which was updated the second we switched the device on. Admittedly, we approached the camera on this device with a bit of skepticism due to the phone’s price tag but you’ll be glad to know we were wrong. Okay, it may not be as good as the S6 of LG G4 but the Idol 3’s shooter can definitely take more than respectable images out and about. 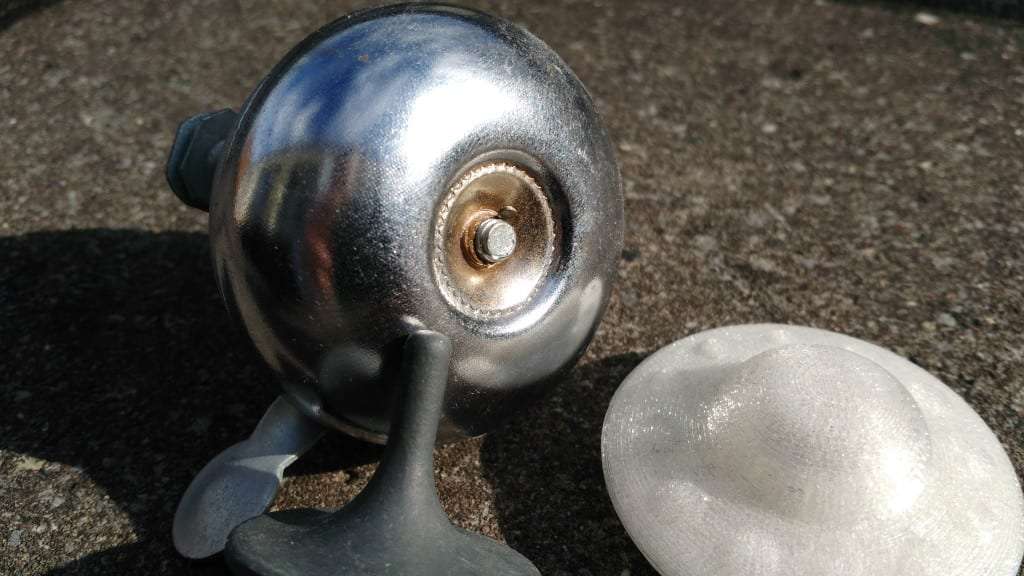 Unfortunately, like many phones though, its low-light capabilities aren’t the best but again, they get the job done and would be more than okay for social media sharing (that pretty much the only reason we take smartphone images anyways in our opinion!) 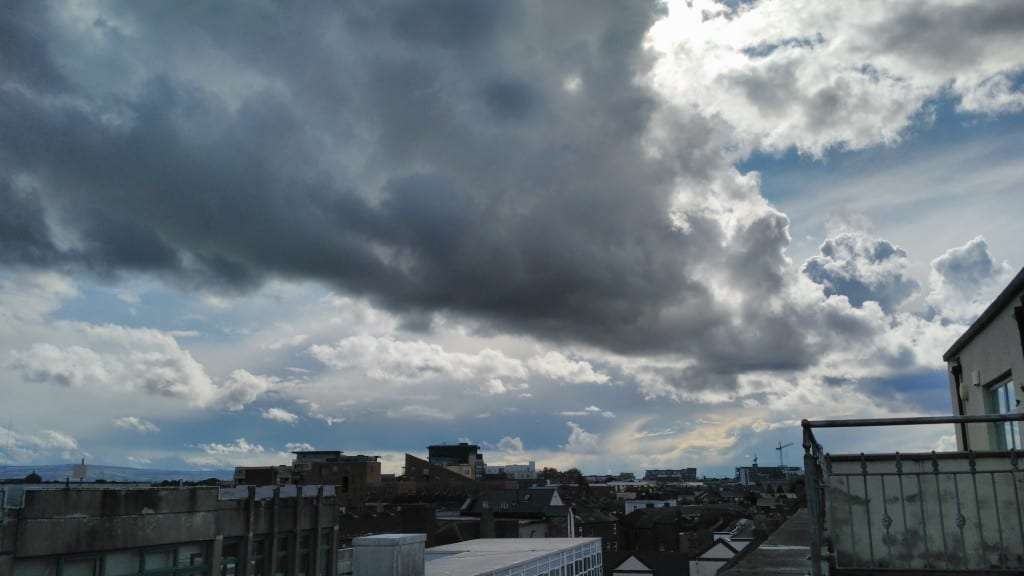 Its front facing 8MP does a very impressive job of capturing all those ubiquitous ‘Selfies’ and has a nice wide-angle lens with good colour reproduction.

The Idol 3 comes with a 2910mAh battery and it was more than capable of getting us through a fairly intensive day. With the screen being such an impressively bright one, we found we didn’t need to have it up past the 25% mark for most of the day and this really benefited the overall battery performance.

We feel with light to medium use, you could easily get two days use out of the 5.5″ Idol 3 which is very impressive.

With this being the first Alcatel phone we’ve reviewed on TheEffect.Net, we really didn’t know what to expect from the Idol 3. Having played with it for the past week now, we can definitely say that we’re big fans of this phone. From its bright, sharp and colourful display, seriously loud front facing stereo speakers, clean and light version of Android and long last battery, all for a fraction of other smartphone prices, the Alcatel Onetouch Idol 3 is definitely a phone you need to pay more attention to.

The Alcatel Onetouch Idol 3 will be available from Three, Tesco Mobile and Meteor and the 4.7″ model will only cost a rumoured €199 (yet to be confirmed) with the 5.5″ model (the one we reviewed) coming in at just €249.