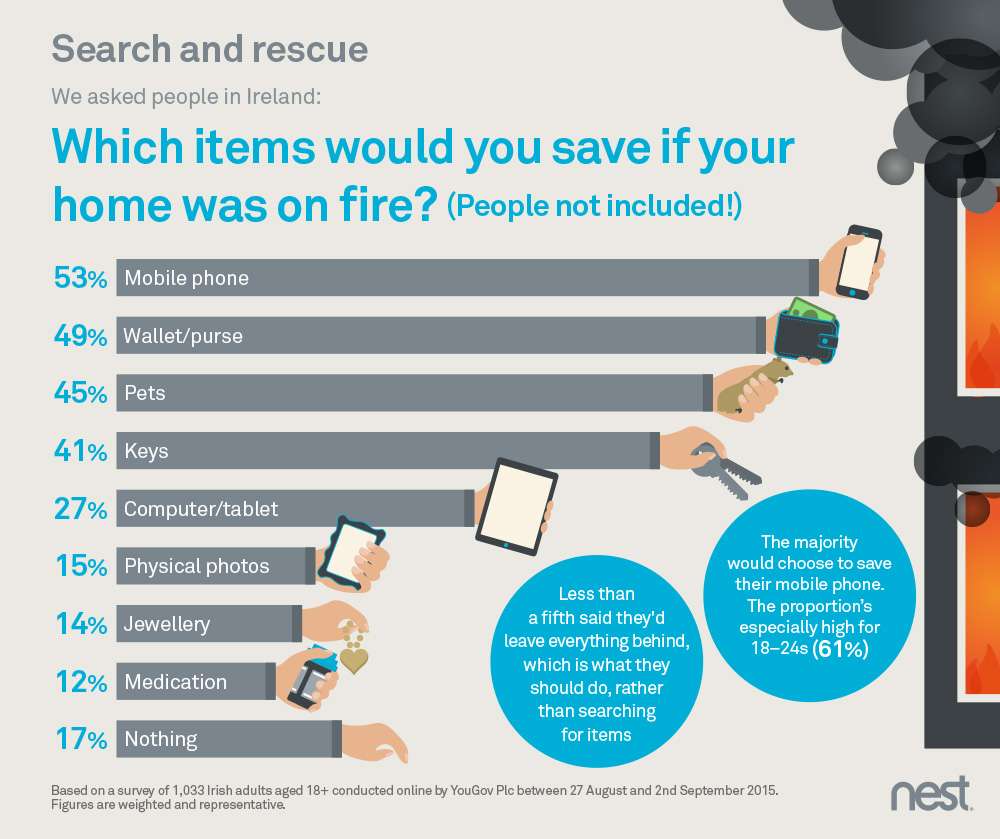 Nest Ireland have just released a very worrying survey highlighting how unprepared many Irish households are when it comes to fire and carbon monoxide in the home. To coincide with National Fire Safety Week this week, the survey was carried out on over 1000 members of the Irish public aged 18 and over and shows some worrying statistics when it comes to things like people checking their smoke alarms and the real threat carbon monoxide proposes.

This survey is to tie in with Nest’s own products and their smart Nest Protect: Smoke + Carbon Monoxide alarm which notifies via your smartphone of any smoke or CO hazards in your home.

You can read the full eye-opening release below, it will definitely make you think twice about the safety measures currently in place in your own home.

Are we fireproof? Nest survey reveals Ireland not prepared for fire and carbon monoxide threat

Dublin, Ireland – October 6th, 2015 – Nest Labs, Inc., architect of the thoughtful home, today announces the finding of a consumer study that many Irish adults lack basic fire and carbon monoxide safety knowledge. Despite 95% of Irish households being equipped with at least one smoke alarm, a worrying nine in ten (88%) adults admit to not testing them weekly in line with government recommendations[1].

In order to understand the scope of the problem ahead of National Fire Safety Week, which runs from the 5th to 12th October 2015, Nest worked with YouGov* to poll over 1,000 Irish adults to understand consumer attitudes and understanding of fire and carbon monoxide safety.

“Modern home fires today spread six times faster than 40 years ago,” said Lionel Paillet, General Manager of Europe for Nest Labs. “You might only have a few minutes before a fire takes over a room, and yet our research shows that many Irish households remain unprotected and unprepared. Nest strongly supports National Fire Safety Week, not only with our products but also with our aim to increase awareness in the Irish market.”

“We believe a smoke alarm should do more than sound a shrill alarm. The new Nest Protect: Smoke + Carbon Monoxide detector tests itself automatically, and lasts up to a decade. You can also silence it from your phone without requiring any additional hardware. And just like the original Nest Protect, it tells you what and where the danger is, and can even alert your phone.” 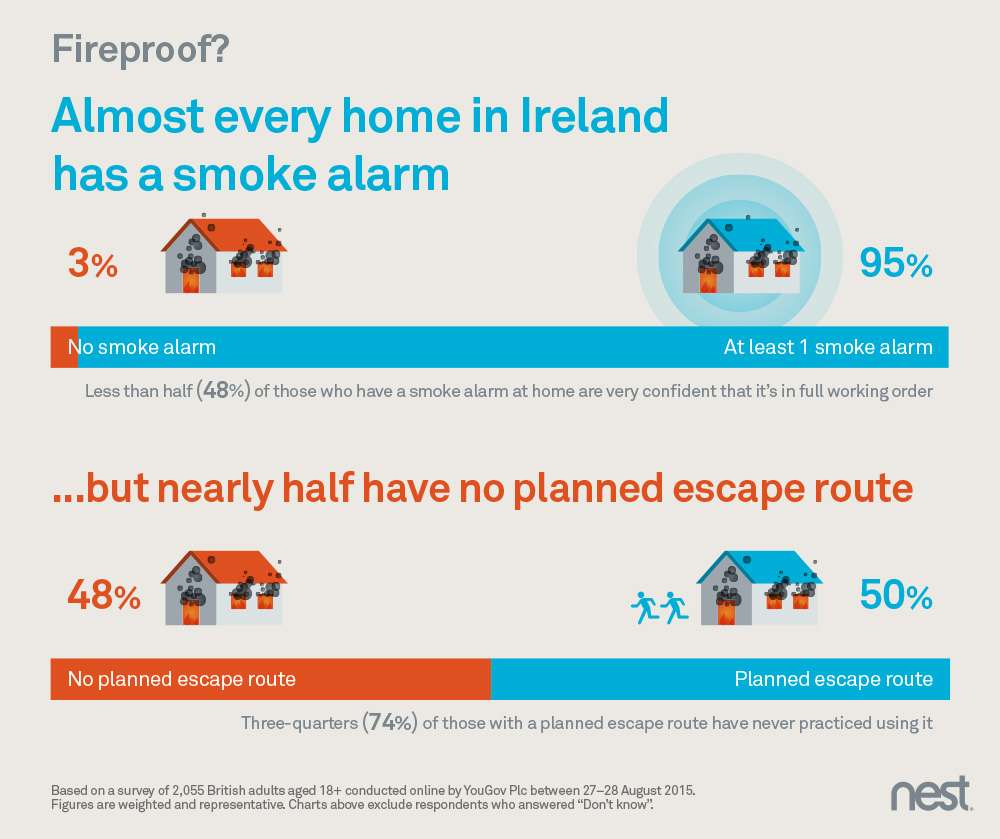 According to Dublin Fire Brigade and the Department of Environment, Community and Local Government, there were 9,685 fires in Dublin last year[2] and an additional 13,310 fires throughout the rest of the country[3], resulting in a total of 37 deaths in 2014.

With over 95% of Irish households being equipped with at least one smoke alarm, an alarming three out of four (72%) of those with a smoke alarm are not very confident that their smoke alarms are in working order. A big factor in this will be that nine in ten (88%) of adults admit to not testing them weekly in line with government recommendations, and a startling one in ten (7%) stating that they never test them.

This in part could be due to the turbulent relationship Irish adults have with their smoke alarms, with four fifths (78%) finding smoke alarms “annoying”. False or nuisance alarms topped the list at 42%, closely followed by the low battery ‘chirp’ at 34%. One in five (17%) dislike the sound of the alarm, while a further 39% cite having to remove the batteries or press a button to silence the alarm as most irritating. 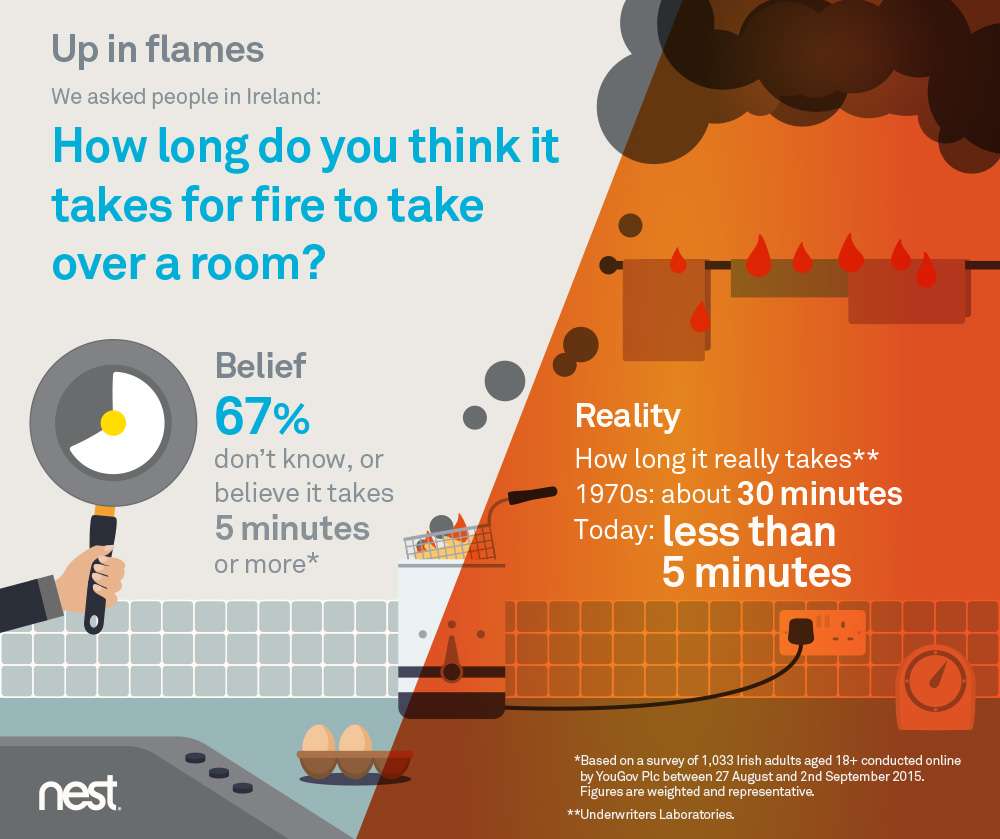 Working smoke alarms are essential as they provide a vital early warning to occupants and allow extra time to escape in the event of a fire, however they are just one tool in a well-rounded safety plan. Over half of Irish adults (53%) state they have an escape plan, however just one in four (26%) of those have actually practiced it.

However, it’s not just a lack of practice that is putting Irish consumers at risk, with four out of five (83%) adults stating they would retrieve items before leaving their home in the event of a fire. The top five items Irish people would save are:

Perhaps one factor in respondents lack of urgency is the fact that three quarters (73%) underestimate or don’t know the speed at which a fire can overtake a room, incorrectly stating it will take more than 5 minutes.

Carbon Monoxide, an enemy to watch 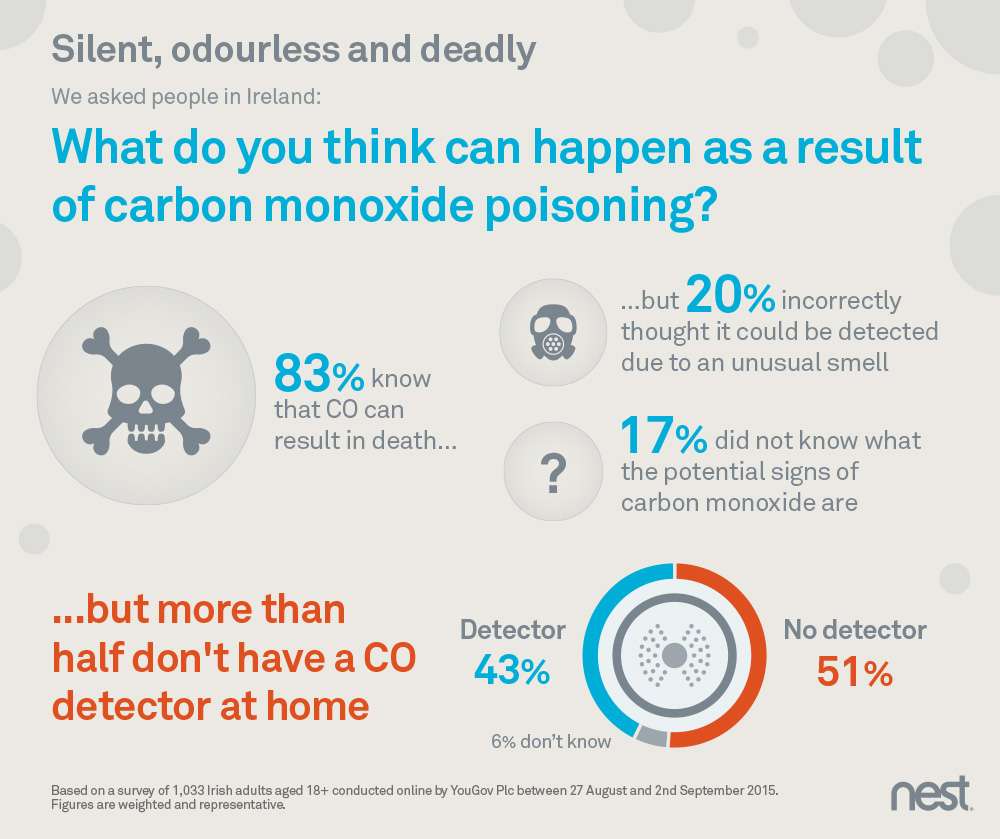 To decrease the number of fatalities from carbon monoxide poisoning, new legislation was introduced last year that saw the installation of alarms compulsory in Irish households when anybody replaces boilers, fires, heaters or stoves. However despite this, less than half of adults have a single one installed despite 83% knowing that it’s effects can be lethal.

Worryingly, one in five (20%) adults believe a common sign of a CO leak is an unusual smell, despite it being an odorless gas, and more than one in ten (16.5%) have no idea of potential signs.

This survey was conducted amongst a sample of 1003 people representative of the Irish population aged 18 or older by YouGov. Fieldwork was undertaken between  27th August – 2nd September 2015. The sample was interviewed online.

Nest’s mission is to create a home that’s thoughtful – one that takes care of itself and the people inside it. The company focuses on simple, beautiful and delightful hardware, software and services. The Nest Learning Thermostat™ and Nest Energy Services keep you comfortable and address home energy consumption. The Nest Protect: Smoke + Carbon Monoxide™ alarm helps keep you safe while Nest Cam™ keeps an eye on what matters most in your home. Nest products are sold in the U.S., U.K., Canada, France, Belgium, Ireland and the Netherlands and are installed in more than 190 countries. The Nest Learning Thermostat has helped save three billion kWh of energy to date. The Nest Developer Program, Works with Nest, makes it possible for Nest devices to interact with other products in your home to do even more.