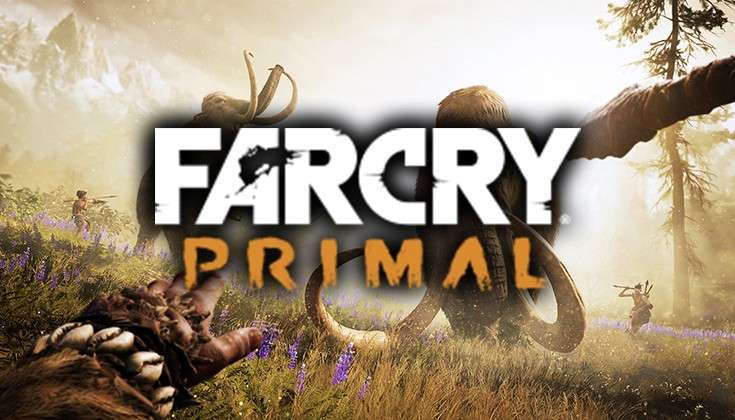 Far Cry Primal has finally arrived and we’ve been playing it for a while now. With its unique time setting, clever gameplay mechanics and jaw-dropping graphics, Ubisoft have taken a chance with this instalment and we think it’s paid off.

“You take control of a character call Takkar, who is left all alone after a dramatic hunting showdown…”

Far Cry Primal takes place as far back as 10,000 BC, which, to you time period nerds out there is also know as the Mesolithic period. Set in a fictional valley called Oros, Far Cry Primal is very different from other Far Cry games in the series, but it does have gameplay mechanics you’ll be familiar with. A huge open world, places to fight for and take over and smooth traversal mechanics make it a joy to explore this detailed world. You take control of a character call Takkar, who is left all alone after a dramatic hunting showdown and now needs to call on all of his survival instincts to last in Oros.

You come across a tribe who has been constantly attacked by an aggressive tribe called Udam, who believe that if they become cannibals, they will cure them of their sickness which alters and disfisgures their skin. Your job is to build your owl tribe, craft your weapons, learn to tame animals and take down Udam‘s evil leader, and end this torture once and for all. 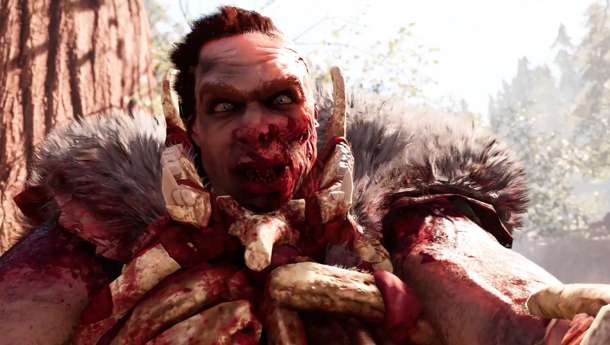 “Once the sun sets, there is a brand new gameplay mechanic in action…”

The game itself is set in a gorgeous open world, with an amazing amount of detail, its very own climate and plants and animals. You are always on the search for a new pond, mountain top, or just a dense forest filled with wolves. Thankfully, with the ability to sprint unlimitedly, getting around isn’t too much of a chore and the ability to fast travel between bonfires which you unlock as you explore also makes things easier. Survival is pretty much everything in the game, the environments are filled with unbelievable amount of discoverable objects whilst you search for wood to make arrows, or meat to eat to heal. The amount of resources really benefit from the game’s flow of combat and exploration. 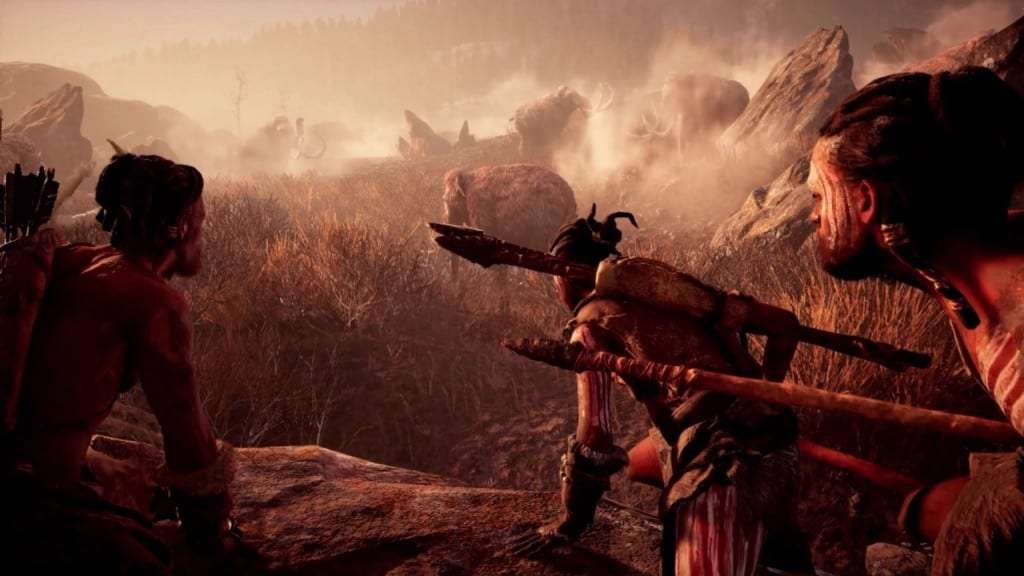 The more you upgrade your village, the more you feel that you’re creating your very own army. This plays in to the overall idea of ‘strength in numbers’ which is an important theme throughout the game. Each of the characters you encounter are unique and their animations are extremely well captured and portrayed on the screen.

It’s easy to be a bit overwhelmed by the amount of sidequests you can do but as you progress, you learn which ones are more important to your story choices. Once the sun sets, there is a brand new gameplay mechanic in action with the beasts wandering the landscape becoming more aggressive so its key you set your club alight to not only see where you’re going but to also scare off any of these attacking beasts! Be careful, your club can burn out and you’ll be left stranded in the dark if you haven’t gathered enough would and animal fat to get you through the night.

Where Far Cry Primal really shines is in its combat system. Your spears really pack a punch and your bow and arrow are like a prehistoric sniper rifle. They all feel very well thought out and executed and this adds endless amounts of entertainment to the overall feel of the game. Hunting and killing the wild life is also very engaging with the ability to activity ‘hunter mode’ to track their whereabouts and to finish a kill. It really adds to the feeling of what it must have been like to be a hunter-gatherer during this time period. With the ability to ‘control’ certain animals in the game also, Ubisoft have added another level of gameplay. 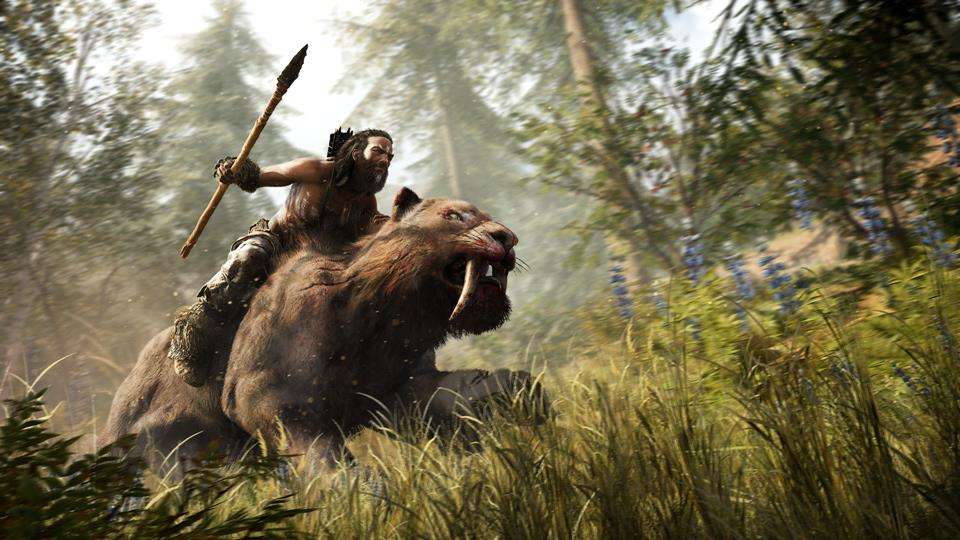 As with the previous Far Cry games, there’s an implemented upgrade system for all of your items along with parts of your village. With the lack of guns, you’d be surprised to find out the shear amount of alternative weapons Ubisoft has created for you to wield and upgrade to your heart’s content. Admittedly, there may be a couple of times where the world might feel a bit ‘copy-and-paste’, but thankfully each region is so diverse that it brings a new adventure to the table each time. The best way to describe Far Cry Primal is a casual survival game, with so much to see and do it will keep you busy for weeks on end.

“…the rising and setting sun moments really took our breath away.”

Ubisoft have outdone themselves again with this instalment with some of the best lighting, foliage and general ‘wilderness’ feel they’ve created with this title. The day-night cycle adds a who other dimension to the way you interact with the environment and some of the rising and setting sun moments really took our breath away. 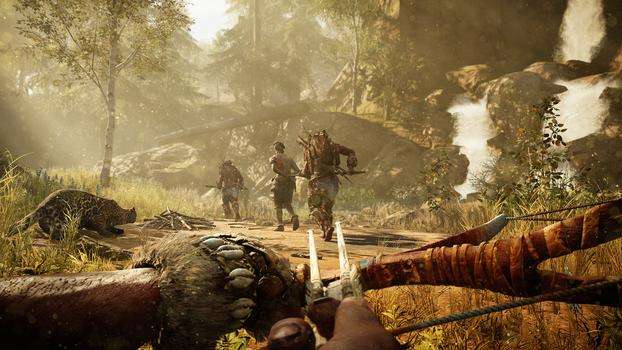 We’ve been playing Far Cry Primal for some time now and we’re still discovering new ways to scavenge, explore and take down your enemies in even more gruesome yet calculated ways. Ubisoft have created a unique prehistoric playground for you to explore and with its unique and varied options for ‘transport’ you’ll have a blast rampaging your way through these Stone Age vistas.

Far Cry Primal was reviewed on a PS4 with a physical review copy sent to us by Ubisoft.