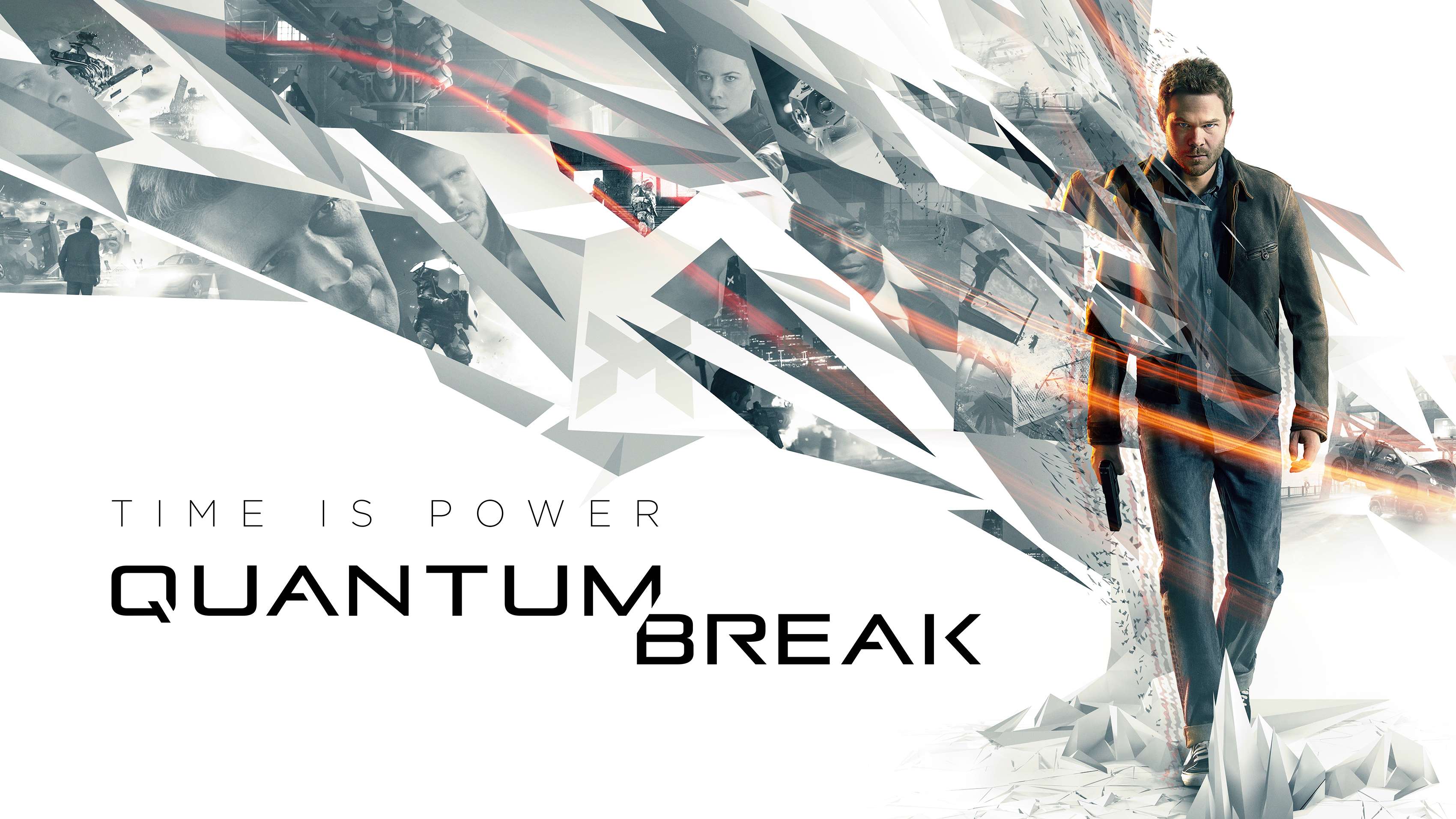 So it’s nearly time for Remedy to release their latest creation into the world in the form of Xbox One and Windows exclusive, Quantum Break. First revealed as far back as 2013 at E3, Quantum Break was one of those games everyone was talking about, not only because it was a brand new IP but more so the fact it was coming from the studio who brought us the iconic Max Payne and Max Payne 2 and fan favourite Alan Wake, Remedy Games.

Having changed around a few things since we first laid eyes on this title, most notably the addition of real hollywood actors to the roster, does Quantum Break live up to all of the hype and is it worthy of your money? Read on to find out! 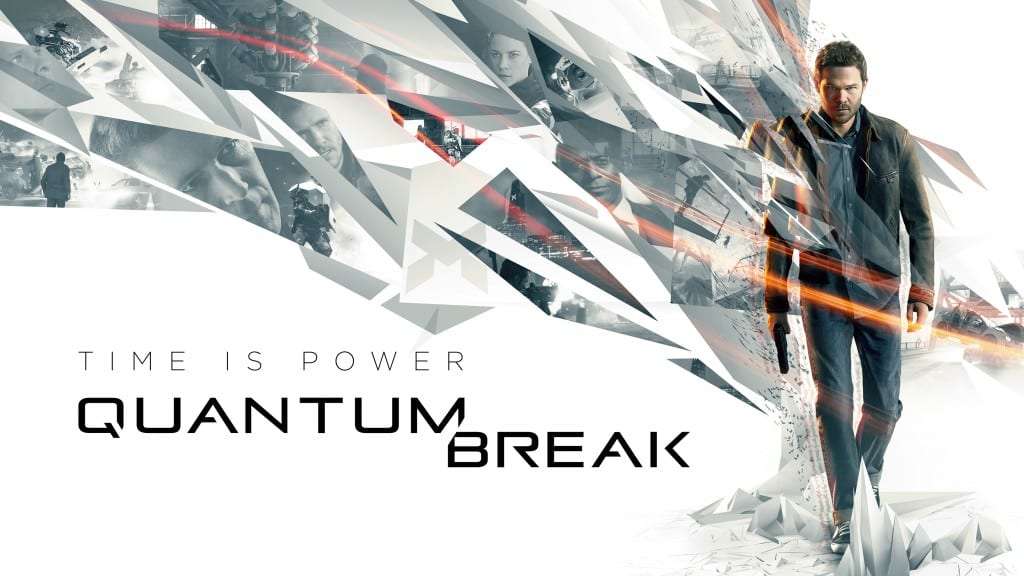 “…one of the most complex and mind-melting stories we’ve played in a very long time.”

When a time traveling experiment goes wrong at the fictional Riverport University, three individuals (Jack Joyce played by Shawn Ashmore, Beth Wilder played by Courtney Hope and Paul Serene played by Aidan Gillen) discover they have the ability to manipulate time. Jack and Beth fight against Paul Serene’s Monarch Security forces to save the future before time literally runs out in the East Coast town of Riverport.

As time breaks down, impossible, split second moments of destruction turn into impressive stages of time powered action. The actions you make as Joyce, Wilder and Serene shape the narrative as it unfolds. 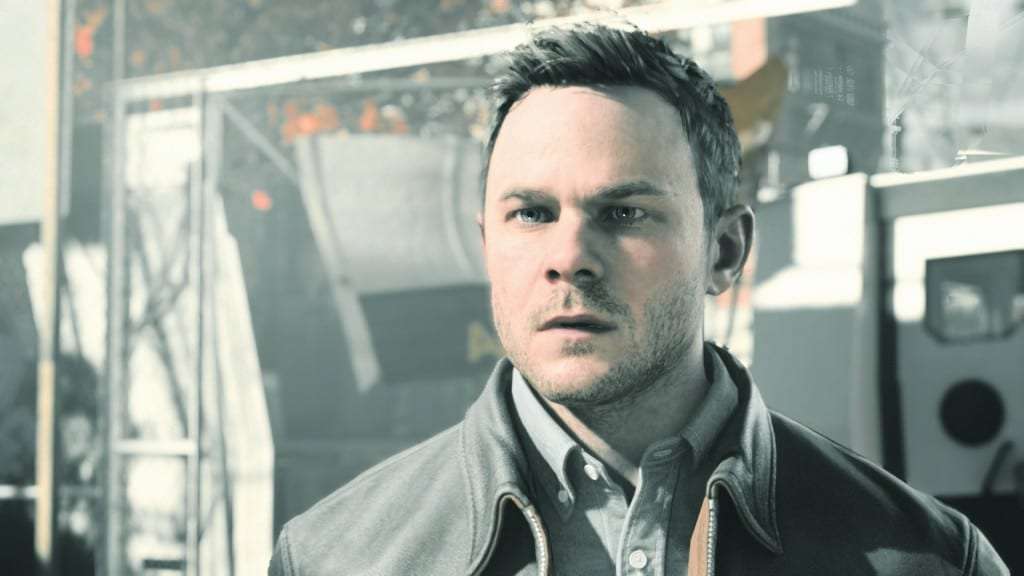 Not wanting to obviously spoil any of the major story key points for you, I will say that Quantum Break has one of the most complex and mind-melting stories we’ve played in a very long time. The simple fact time travel is involved can tell you just how complex the narrative can get so a couple of playthroughs is recommended to experience all possible outcomes from the story.

Another quite unique aspect of this game and its story is the addition of a live action 4 part Quantum Break TV show which players can watch at their discretion but will be given the option to do so upon completion of each of the game’s acts. We highly recommend that you do watch these sections as they add a whole lot more to the overall immersion in the game’s universe.

There’s also a vast amount of emails, notes and audio clips to find throughout your exploration of the game’s levels, Sam Lake himself has said there’s almost ‘half a novel’s worth’ of additional content to find in various computers, tablets and radios dotted around each of the levels so it’s really up to you as to how much of it you take in.

“…the sheer technical achievement by Remedy to pull it all off really is something to be commended.”

Quantum Break’s gameplay consists of exploration, run and cover gun fights with some extremely impressive time manipulation abilities thrown in to aid you in your battles and general story led interactions with the other characters. As the game progresses, your abilities (our should I say Jack Joyce’s abilities) develop and become stronger with the use of the upgrade menu once you find enough Chronon sources scattered throughout the game. 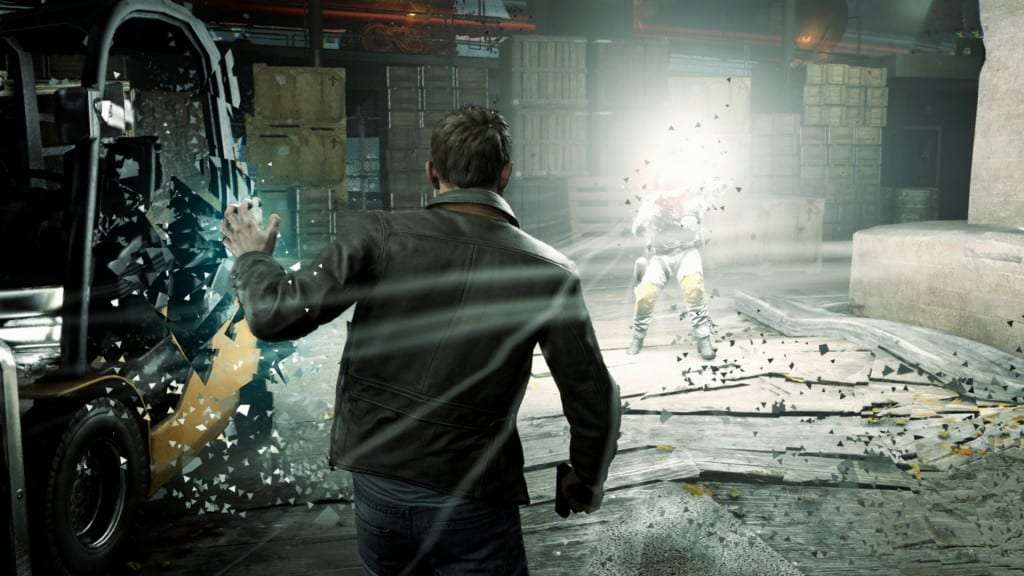 Chronon is the energy used to help you manipulate time and with the addition of extra ‘battle perks’ such as Time Dodge and Time Rush, you have the upper hand for most of the shootouts in the game. 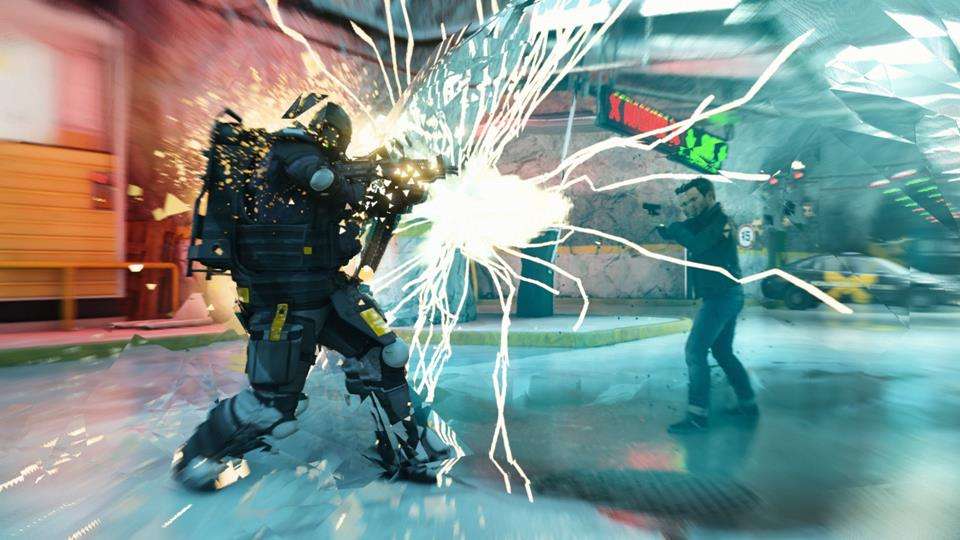 As the game progresses though, you realise that Monarch have developed their own technology to allow their soldiers to also manipulate time and come after you during the ‘stutters’ in the game. The stutters are when time stands still in the game for everyone but you and these newly equipped soldiers. 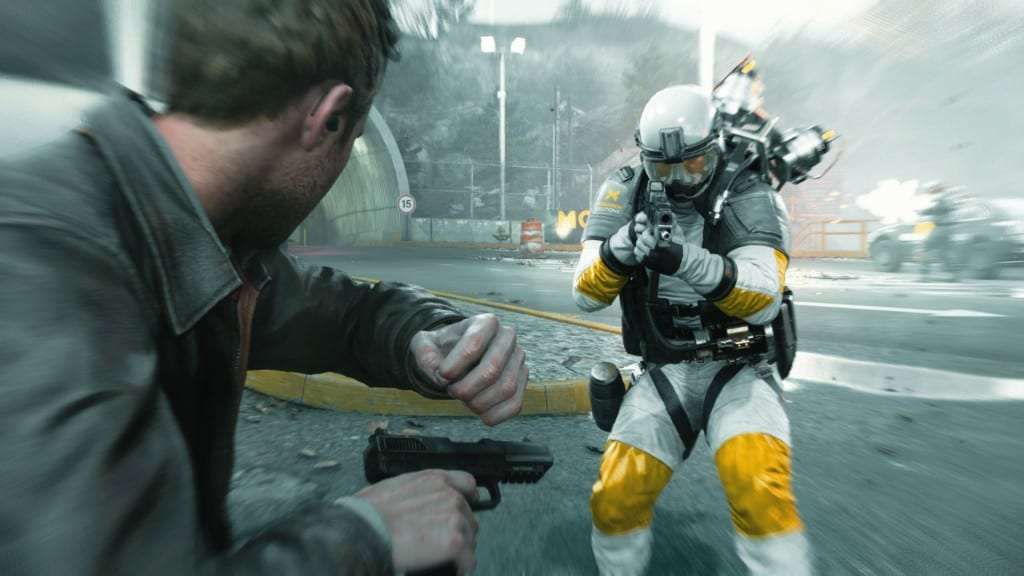 The epic shootouts with all of these enemies whilst huddled behind the scenario and firing Time Blasts really is great fun and allows you to take down your enemies in so many impressive ways.

The whole implementation of these stutter effects, the audio manipulation as you run around in these stutters and the sheer technical achievement by Remedy to pull it all off really is something to be commended.

Now this is where Quantum Break really shines. Watching at least one of the gameplay videos for this game or even having a look of some of the in-game screenshots highlight just how good looking a game this is but they still doesn’t do it justice as you’ll need to see it running on a screen with your own eyes to really appreciate just how fantastic looking a game this is. 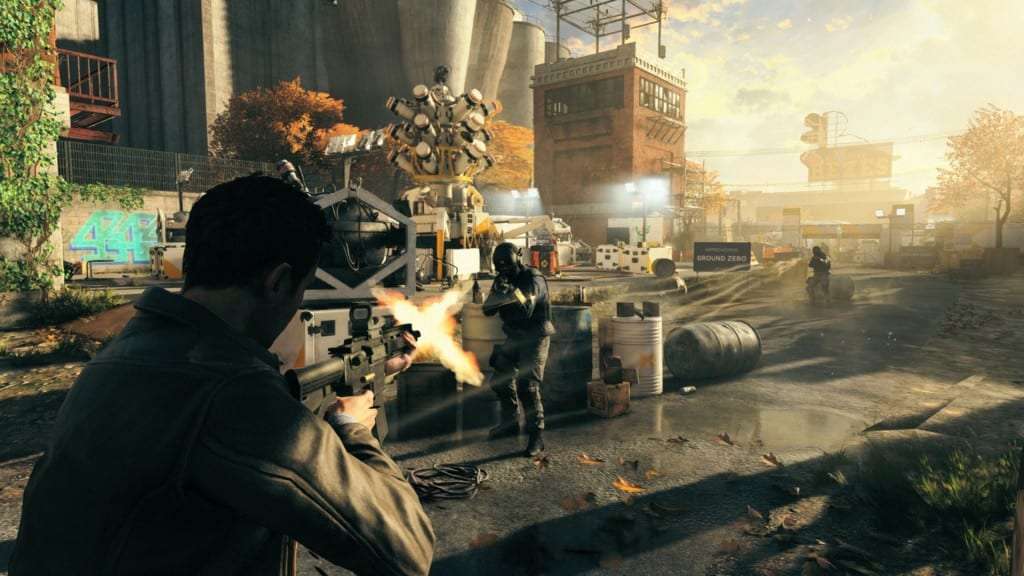 Like Alan Wake before on the Xbox 360, Remedy Games really have a knack for pushing Microsoft’s consoles to their limits and this makes Quantum Break one of the best looking, if not, the best looking game on Xbox One right now or maybe even this current generation of consoles. 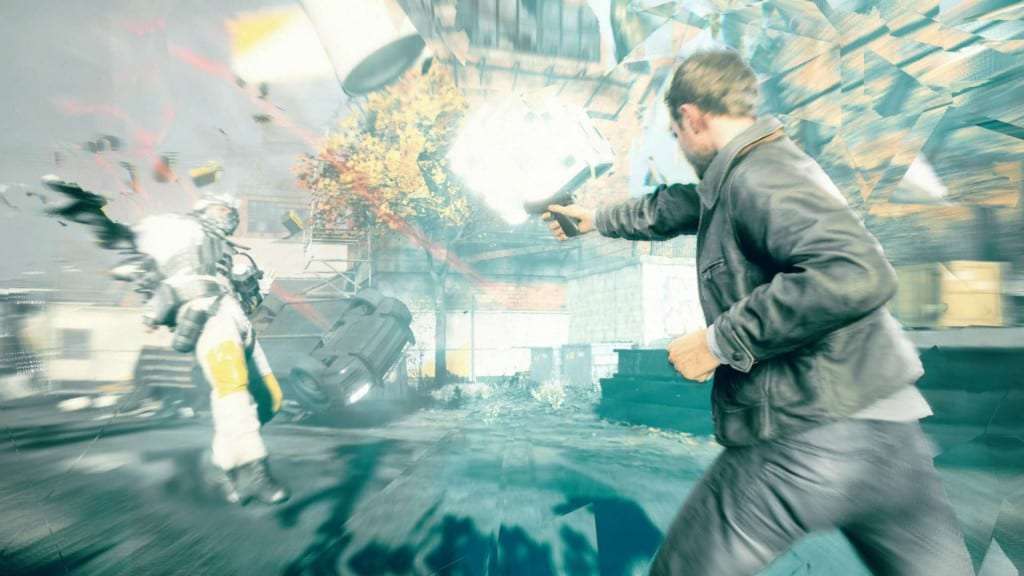 The facial animations of the lead characters is also some of the best we’ve seen and we’ve read that Remedy went as far as to take teeth moulds of all the lead actors so that their 3D counterparts are as close to their real world likeness as physically possible which is pretty crazy! 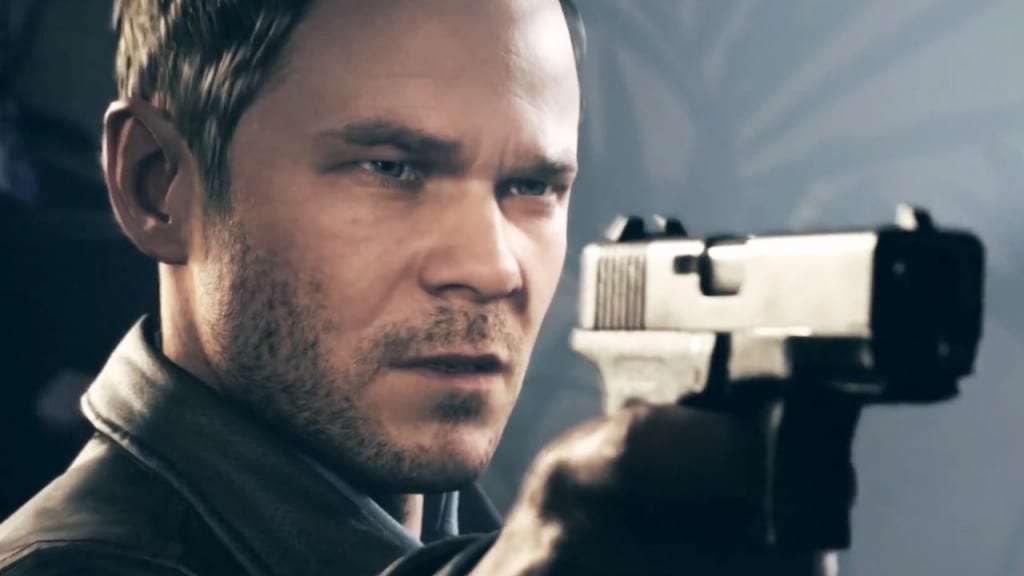 One aspect of the graphics which may need a bit of work though via a patch/update would be the shadow detail as there were a few times where the main characters would be interacting in a cut scene and the shadows on their faces were extremely pixelated and distracted from the actually scene.

Other than that, Quantum Break really is one of the best looking games you can get on a home console right now.

Quantum Break, simply put, is a must-play game for anyone that owns an Xbox One or Windows PC if only to experience the unique nature of its narrative with the addition of the live-action segments which play out differently depending on the choices you make in the game. This concept is extremely engaging and helps push the game’s narrative into something more than a game. 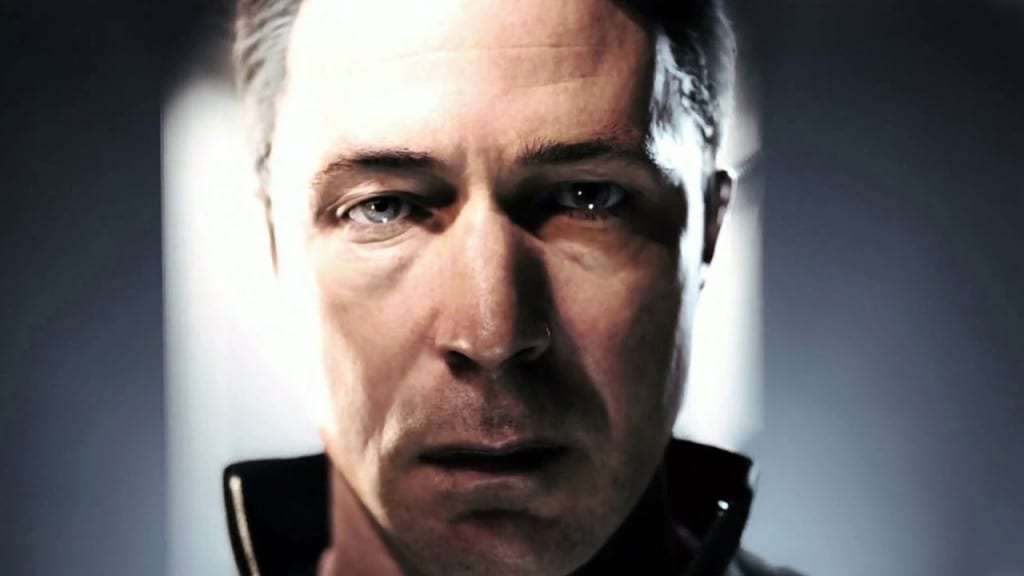 Remedy have created a world and a story that would give many of Hollywood’s screenwriters a run for their money and with their amazing ability to create jaw-dropping graphics, Quantum Break really is a impressive overall package.

Quantum Break launches next Tuesday, April 5th 2016, on Xbox One and Windows PC.

The game was reviewed using a review code from Microsoft Ireland.

Finally, we also got the chance to have a quick chat with Aidan Gillen AKA Paul Serene from Quantum Break recently and he told us how excited he was for people to see him in his role and thinks Remedy Games have done a fantastic job at creating a believable yet futuristic world. 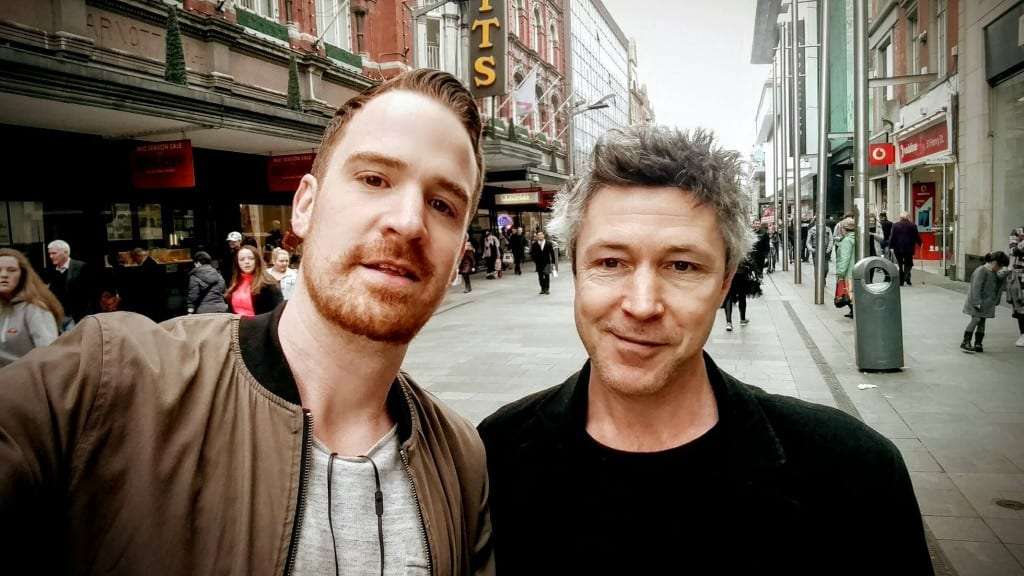