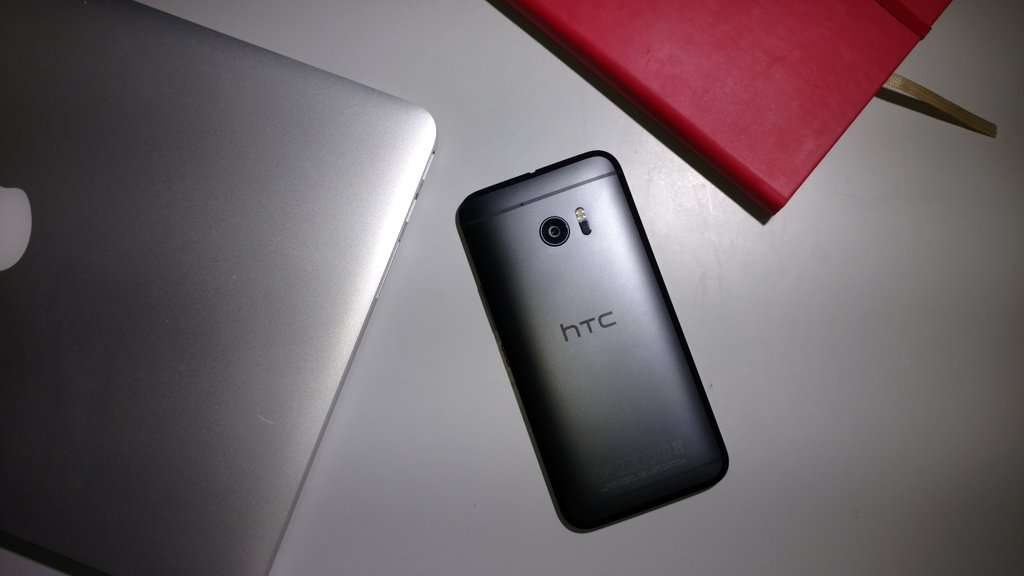 HTC’s worrying sales and stats have done little to dent their forward momentum and their latest flagship, the HTC 10, is a testament to their perseverance. Arriving slightly later to the market than its main competitors, Samsung and LG, the wait definitely appears to have been worth it. The HTC 10 is packing all the latest technology and features you’d expect from a flagship in yet another extremely well built phone.

The HTC 10 is, unsurprisingly, a fantastic looking phone with one of the best build qualities on any smartphone available right now. Keeping some of its predecessor’s design cues, such as the all metal rounded back, the 10 can be seen as a hybrid of last year’s One M9 and One A9 which is definitely not a bad thing.

To help differentiate itself from most other phones also, the HTC 10 has an extremely prominent chamfered edge all around the back of the phone with a high-sheen finished which is great for catching the light in different ways. On the front, you get a nice big slab of Corning Gorilla Glass 4 protecting the 5.2″ QHD LCD5 IPS display (more on this later) and an extremely fast finger print sensor. 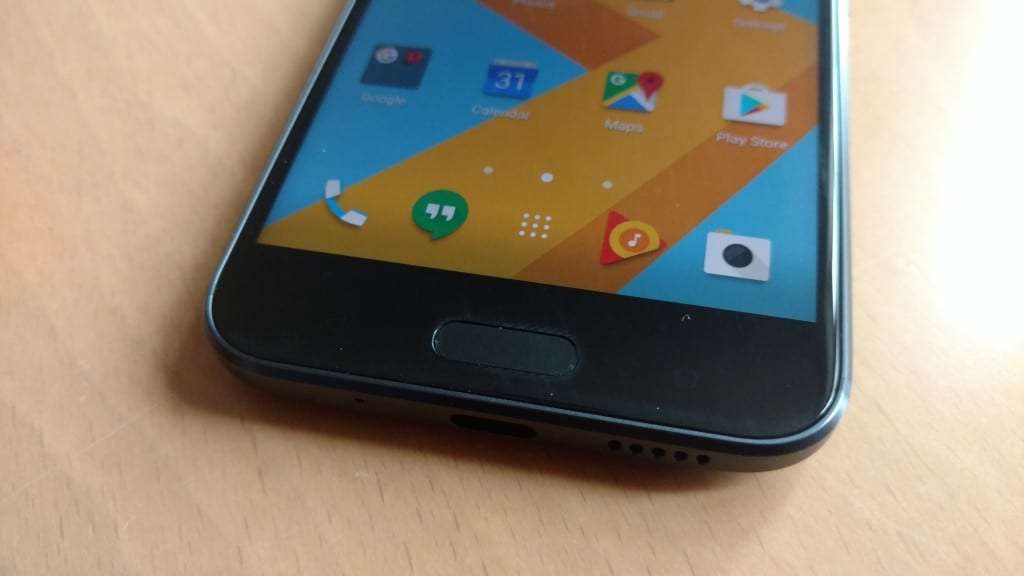 The HTC 10 feels great in the hand with its gently curved back and polished metal finish. Be careful though, due to its pristine finish, it’s a touch on the slippery side.

We must also mention the speaker set up of this particular phone as it’s quite unique. Gone are the HTC standard stereo front facing BoomSound speakers and now we have a ‘tweeter and subwoofer’ Hi-Res BoomSound set up. What I mean by this is that, on the front of the phone, above the screen, is a front facing speaker which acts as a tweeter whilst on the bottom of the phone, under the speaker grill, there’s a more powerful subwoofer-like speaker with both speakers having the ability to play 24-bit High-Res audio and both powered by separate amps. 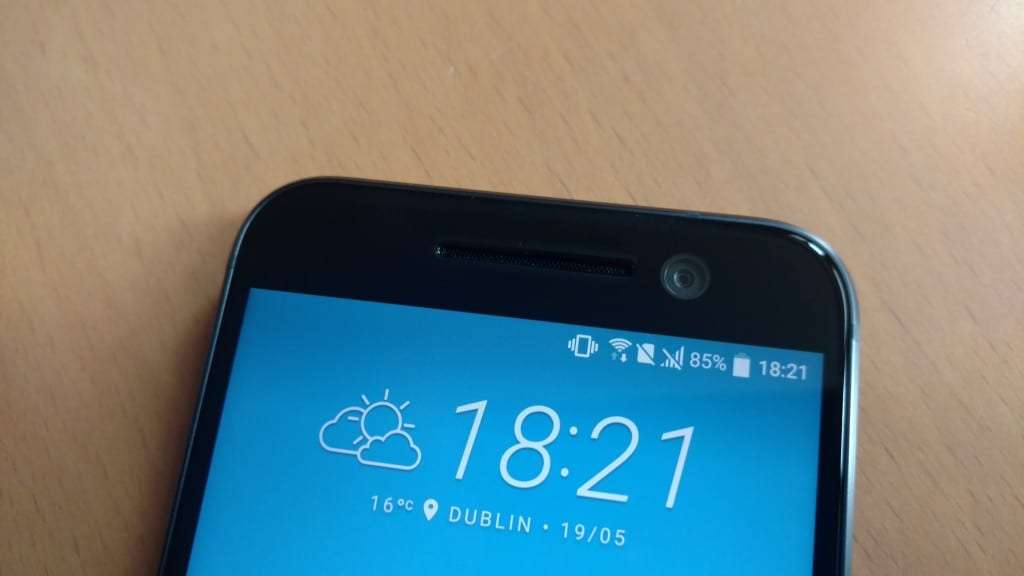 Testing the set up for ourselves, they’re definitely not the loudest speakers available and we can’t say that we don’t miss the front facing stereo set up but they definitely offer an impressive range for both listening to music and watching films.

“…one of the slickest user experiences available on Android, or any smartphone for that matter.”

Powering HTC’s latest flagship is Qualcomm’s Snapdragon 820 processor along with 4GB RAM. Both of these combined with HTC Sense 8.0 running on top provide one of the slickest user experiences available on Android, or any smartphone for that matter. HTC has even gone as far as to remove any duplicate apps it may have when looking at Google’s offerings so as reduce on any additional ‘bloatware’.

They’ve also improved on their theme customisation options over last year’s M9 with the ability to use a ‘Freestyle Layout’ for all of your apps and homescreens which we particularly liked. What this means is that you no longer have on screen grids which you must go by so you’re free to place your app, widget or a sticker representing your app, anywhere on your homescreen. 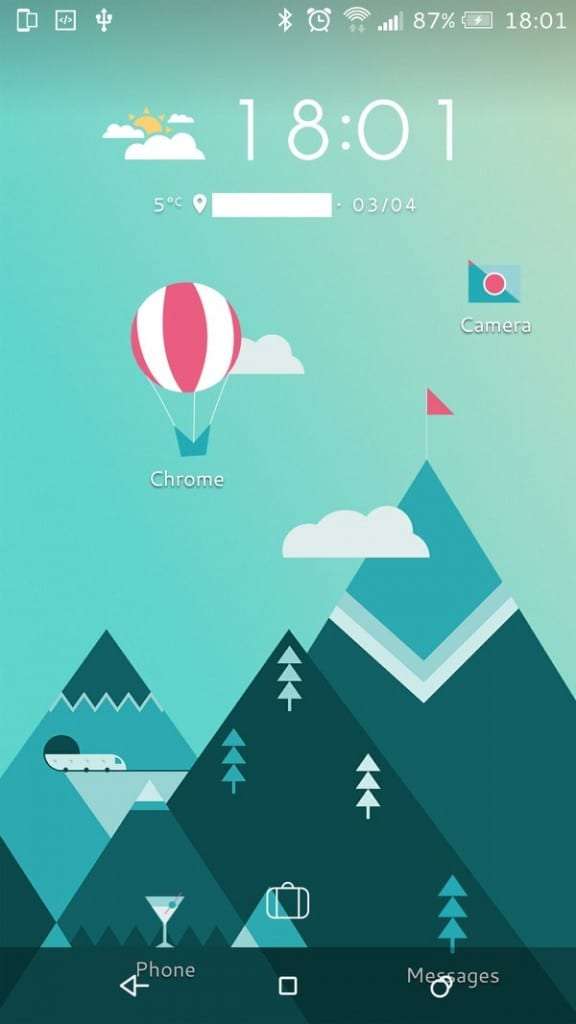 The HTC 10 has a 5.2″ QHD LCD5 display which has an eye-watering PPI of 565 and a great colour temperature so all your images and apps looks natural and pleasing to the eye. It’s also an extremely fast screen in terms of its touch responsiveness with HTC claiming it as one of the ‘fastest’ screens available on a smartphone right now.

Now, the camera has always been a point of contention for HTC’s flagships with people always having very different opinions on their quality. With the HTC 10, the company have tried to put all this to bed by offering what is undoubtably their best camera to date. having introduced their unique UltraPixel technology way back in 2013, the HTC 10 has been given the latest upgrade and is now packing a 12MP UltraPixel sensor with laser autofocus, optical image stabilisation (OIS) and an f/1.8 aperture. 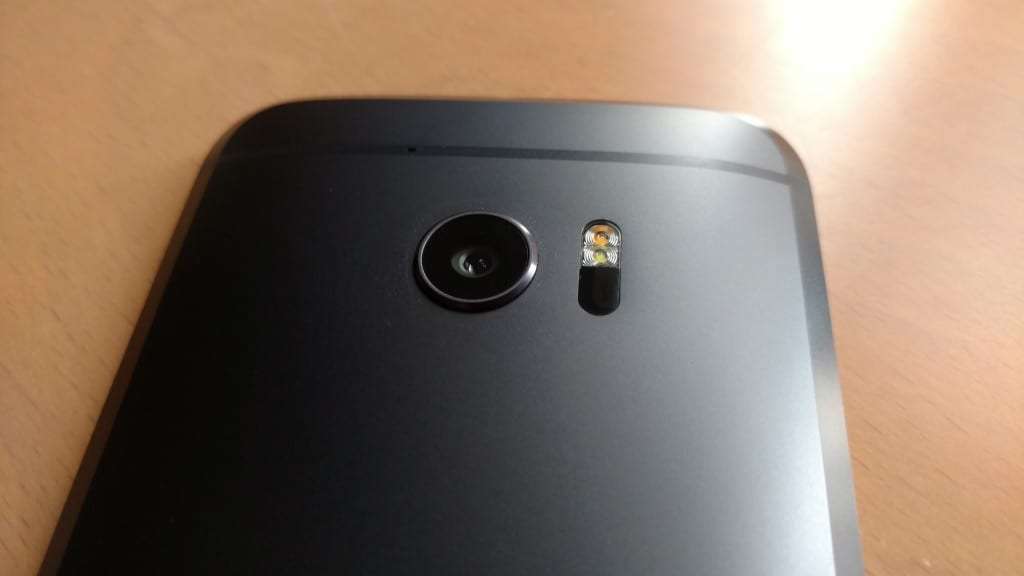 All of these terms and abbreviations may mean nothing to most of you but they add up to create a fantastic camera experience. The 10 has extremely fast autofocus thanks to its laser autofocus sensor, the detail captured by the 12MP sensor is extremely natural looking with very little noise and good colour reproduction and we can’t ignore the 5MP ‘UltraSelfie’ camera on the front which is the world’s first front facing camera to have OIS built in so as to capture better low light images and make your vlog recordings look that bit smoother.

The main camera also takes very impressive videos with the ability to record in 4K and, again, as another world first for a smartphone, the ability to record 24-bit Hi-Res stereo audio. (Which you’ll be able to appreciate on the pre-bundled Hi-Res audio compatible headphones which come with the European version of the phone, nice touch HTC!)

Both of these cameras are leading the way in terms of quality, speed and colour accuracy and, with HTC constantly updating the software for the cameras, they will only get even better over time. Below are a selection of images I captured with the phone whilst on a visit home to County Mayo: 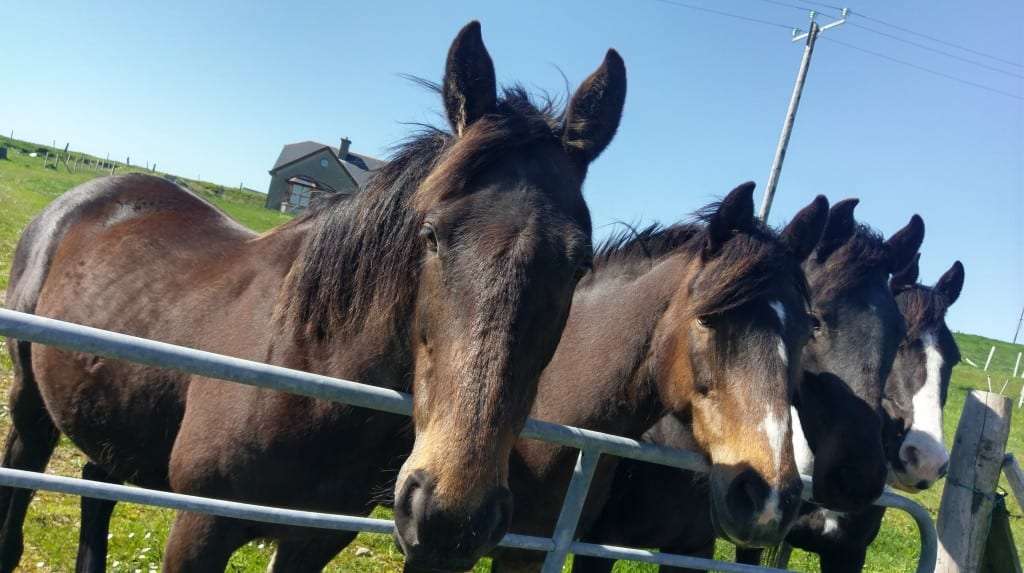 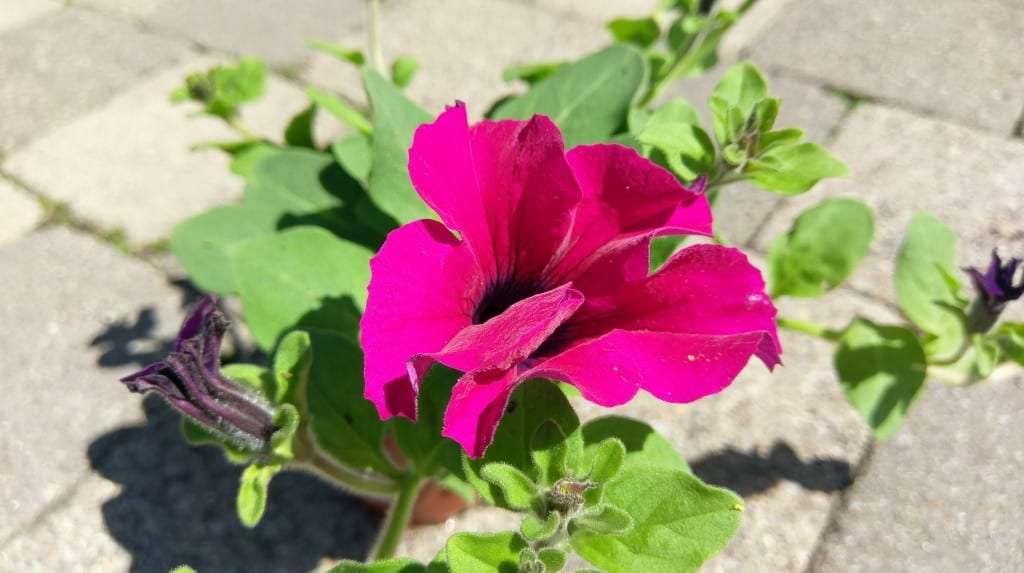 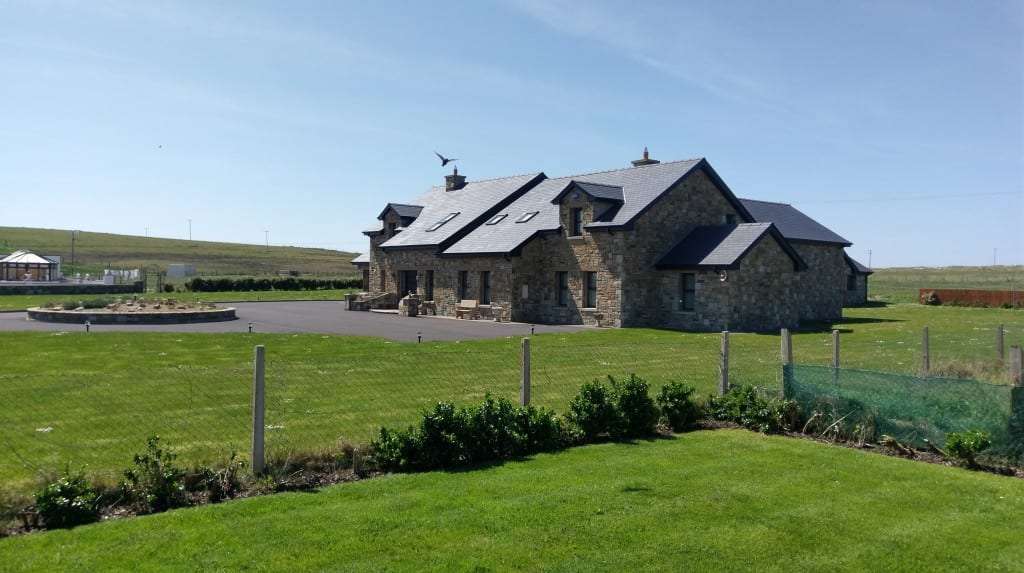 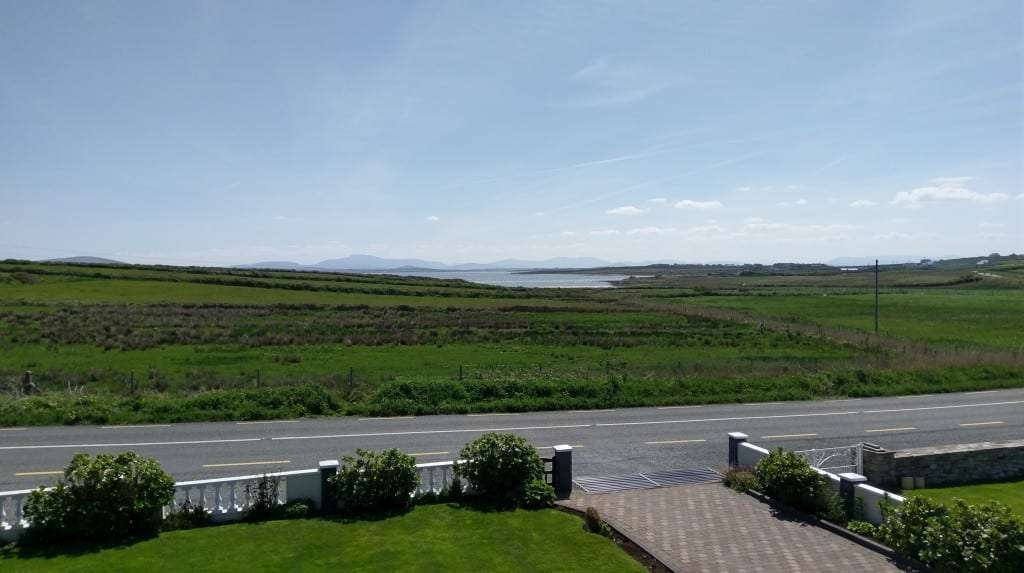 The HTC 10 has a decent sized 3000mAh battery to power all these features and with Qualcomm’s Quick Charge 3.0, which allows you to go from 0-50% in 30 minutes, you’ll need to be very unlucky for the HTC 10 to die on you whilst out an about and away from your Quick Charge charger. They have been claiming ‘up to 2 days of normal use’ but we didn’t really ever achieve this.

Admittedly, in reviewing the phone, we were using it more than usual to take photos, watch videos, play music and general testing scenarios but still easily managed to get a full day’s use out of the phone with about 20% battery left which we found to be very good.

For the HTC 10, HTC really do appear to have started from the ground up and have created a truly impressive flagship phone that can hold its own against, and even surpass, many of the other major flagships available out there right now. Let’s hope this is a sign of things to come from the Taiwanese manufacturer.