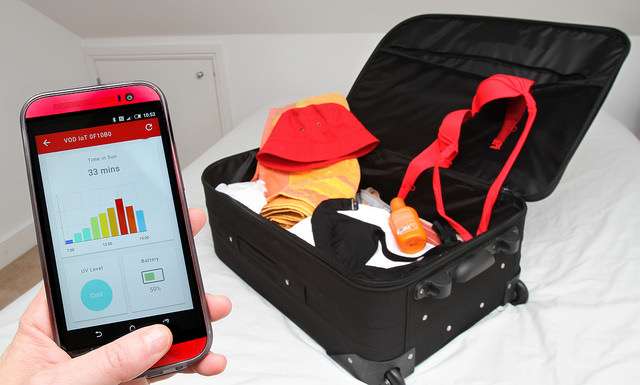 (20%) Irish people who have had their luggage lost or stolen when travelling.

–          Vodafone ‘Smart Summer’ concepts showcase the mass-market potential of IoT ahead of a new generation of very low-cost, low-power and 10+ year battery life devices which are set to transform how people work, live and relax.

Vodafone today announced it has developed a suite of Internet of Things (IoT) concepts which include connected ‘Smart Summer’ holiday essentials to help protect against UV rays, keep children safe on the beach and locate lost luggage. 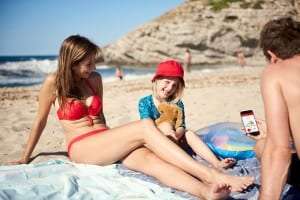 The Vodafone ‘Smart Summer’ concept bikini and men’s swim shorts are equipped with UV sensors that track exposure to sunlight throughout the day. A smartphone app notifies the user when they have had too much exposure to UV light. The swimwear also contains a small vibrating alert built into the waistband and strap. The ‘Smart Summer’ child’s sun hat contains a UV sensor plus a low-powered Vodafone SIM and tracking device which sends a warning message to the parent’s smartphone if the child wanders beyond a pre-determined distance. The ‘Smart Summer’ suitcase includes embedded tracking technology to enable the owner to geolocate missing luggage via their smartphone.

The ‘Smart Summer’ concept designs were developed as a pan-European online survey commissioned by Vodafone from YouGov found that nearly half (48%) of European respondents from the UK, Germany, Ireland, Netherlands, Spain, Greece and Italy have forgotten to apply sunscreen on holiday with three-quarters (76%) saying they would be more likely to cover up if they had received an automated alert when they have been exposed to UV rays for a long period of time. 14% have personally lost luggage or had it stolen and 16% have had this happen to a travel companion.

When surveyed Irish respondents revealed that: 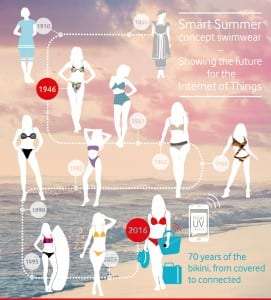 The YouGov study found a strong level of consumer interest in IoT-enabled wearable technology designed to help enhance health and wellbeing and keep families safe. The pan-European study asked the opinions of 8,653 people across Germany, Greece, Ireland, Italy, the Netherlands, Spain and the UK.

Lutfu Kitapci, Vodafone Ireland, Consumer Director said: ”These concept designs showcase how far the Internet of Things could theoretically take us in the very near future. We know that connected products have already made our day-to-day lives easier when it comes to entertainment and lifestyle functionality. Now companies in every industry are already embracing IoT technologies and see these as critical to their future. Vodafone’s Smart Summer concepts showcase the very real and tangible benefits IoT could potentially provide to our health and well-being.”

The Internet of Things revolution

Vodafone’s ‘Smart Summer’ concept designs use current IoT technologies to demonstrate potential applications for network intelligence in everyday consumer devices. The bikini, swim shorts, sun hat and suitcase contain embedded hardware with a battery life of around one week. By the end of 2017, a new generation of IoT devices will reach the market, adding even greater momentum to the connected devices revolution. The hardware within ‘Narrowband IoT’ devices will be ultra low-power (typical battery life will exceed 10 years on a single charge), small, very cheap (typically costing no more than a few euros each) and will use very little wireless bandwidth – recent research found that Vodafone’s global IoT networks will be able to support more than one million devices simultaneously per square kilometre.

Separate research from Vodafone recently indicated that IoT is already entering the mainstream for many companies. More than three-quarters of 1,100 enterprise and public-sector executives surveyed across 17 countries said that taking advantage of IoT technologies will be critical for future success, while more than half of consumer technology companies said they intended to bring new IoT products and services to market within the next two years.