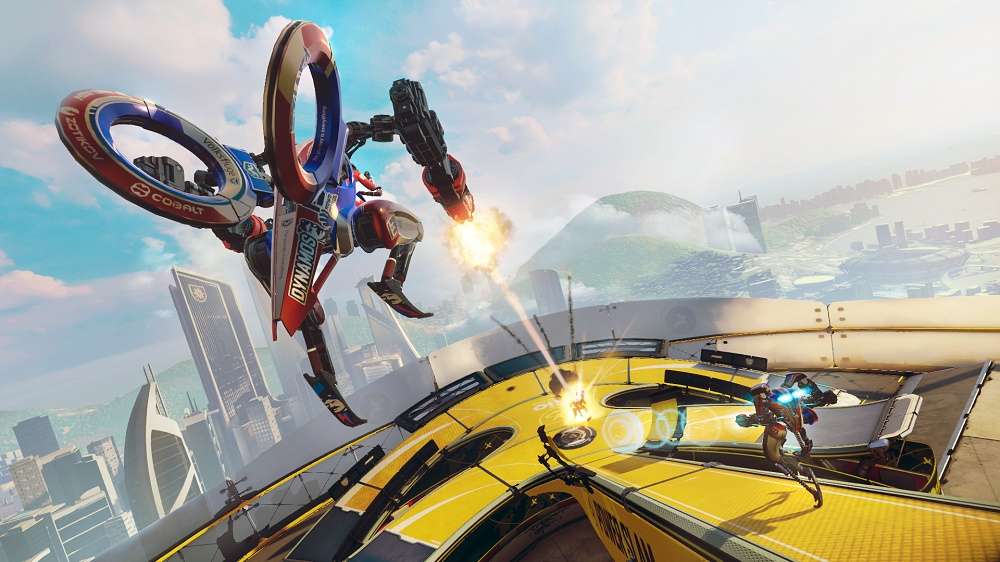 RIGS Mechanized Combat League is a PSVR launch title from Guerrilla Games, the guys who brought us the Killzone franchise, a staple developer for many Playstation hardware releases. Thankfully, the team in Guerrilla didn’t try and shoehorn a Killzone FPS VR experience onto the headset as a launch title but, instead, went down an entirely new path with this outing. Is it worth €59.99? Read on to find out!

RIGS story is set in the distance future where we, as a society, have decided to replace our football players with giant guns and mechanical beasts. I know it doesn’t look like a sports game at the start but the more you play, the more you realise that it is. Your goal is to set up a winning team of mech pilots and take on other teams from all over the world in technicolour arenas with massive explosions and intense gunfights. 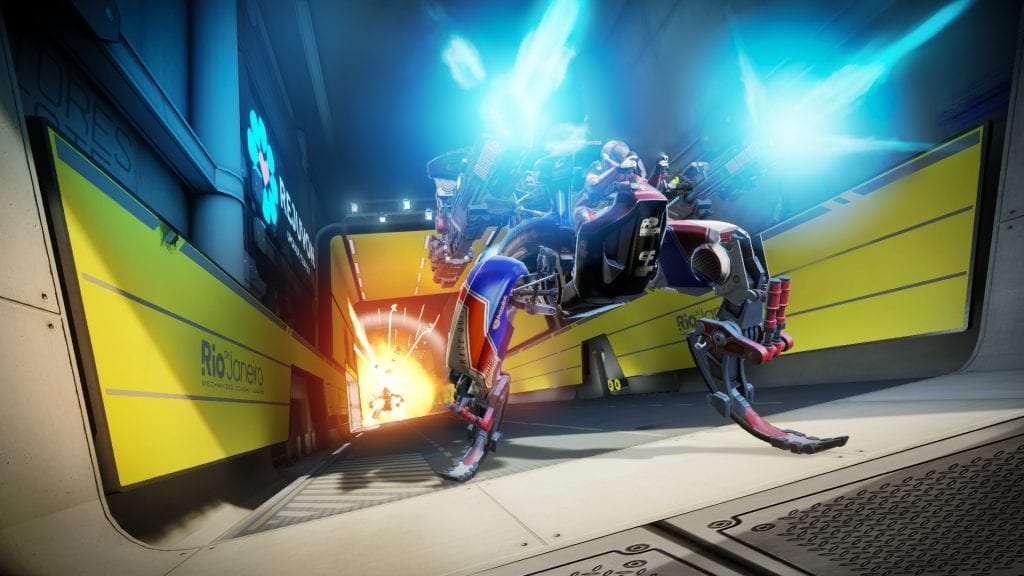 One thing must address right from the off is the potential for motion sickness. Seeing as this is ‘full fat VR’ meaning you have full 360 degree control of your viewpoint and your rig’s movement, it can definitely get quite disorientating at times. Admittedly, Guerrilla Cambridge have created some clever visual techniques to try an mitigate this but it still takes some getting used to. I personally didn’t have a problem with this game but a couple of my colleagues found it a bit too much to handle as it made them feel nauseous. I’d definitely recommend taking small steps in terms of how long your play sessions with this game are until you feel completely comfortable with the intensity of all the movement.

In RIGS, there are several game modes for you to choose from with the first one being an American football style game called ‘Endzone’. The second one you can choose is called ‘Team Takedown’ and is pretty straight forward as you simply fight amongst other robots and the most takedowns win. The third mode can be seen as a mashup of the first two which has you not only take down enemy mechs whilst making your way to either end of the arena but they’ve thrown in a bit of basketball style gameplay if everything wasn’t manic enough.

Focusing on your rig, whichever one you choose, it has 3 different modes which you can easily switch between by hitting Square, Circle or Triangle. Each mode allows you to either heal, increase your speed or the amount of damage your weapons inflict. If you take 3 enemies down in a row, you initiate Overdrive which enables all 3 of the modes for a short period of time. 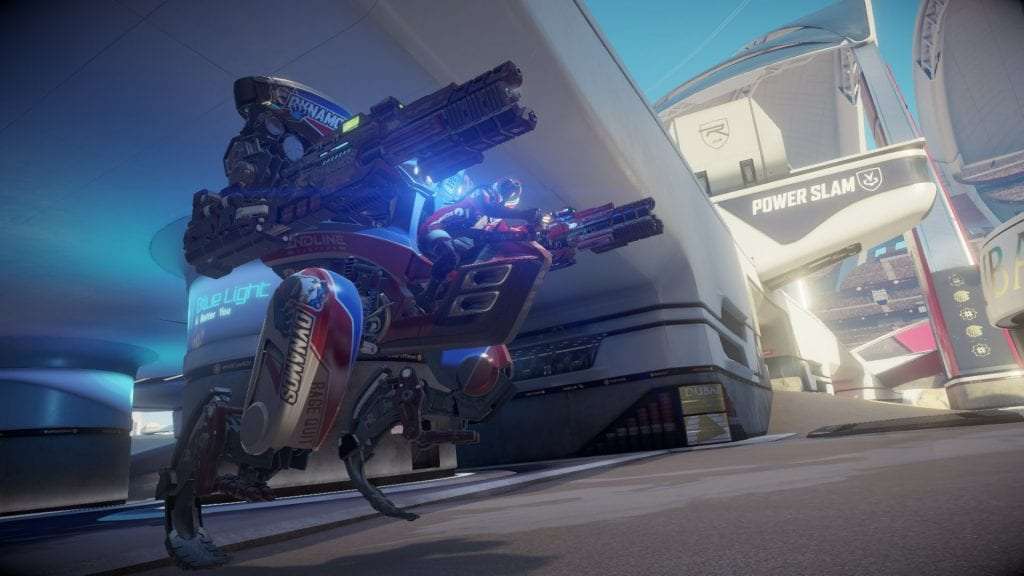 In terms of making your way through the game, there’s a nice progression system in place which allows you to upgrade not only your rig, but also your helmet and uniform. Sponsorships throughout the season also allow you to pick up new liveries, fans, and a whole array of currency to buy bigger and better rigs to improve your chances during the season.

For RIGS multiplayer offering, your options are quite limited but unlike most other VR games, the fact there is even a multiplayer option is a bonus. We tested out the one vs. one (with two computer-controlled allies each) mode which was great fun and knowing you’re playing someone else in VR is pretty cool. We also tested out being part of a three-man team in an online battle which was just as manic as we expected. Load times for the matches are pretty decent too but I guess it’s early days seeing as many people haven’t gotten stuck into the game yet. 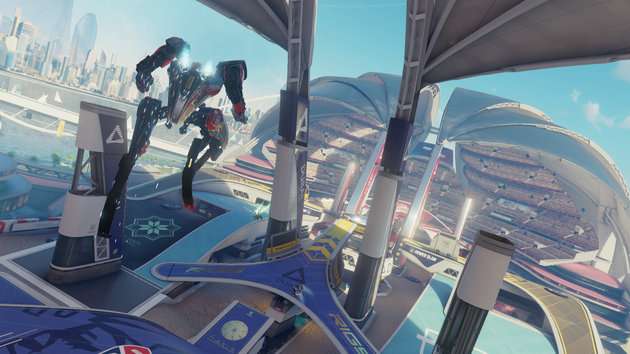 Right from the off, the first thing which we noticed was the sheer scale of them game. The VR adds a simply staggering amount of depth to things as you enter your massive mech, and even more so when you enter the varied combat arenas, in all their gigantic splendour. Surprisingly, RIGS is a very colourful game, with the robots mainly adopting a bright, primary colour-focused palette, and the pilots themselves having varied uniforms as well. The lighting throughout is very well handled as well and the sound design must also be commended. 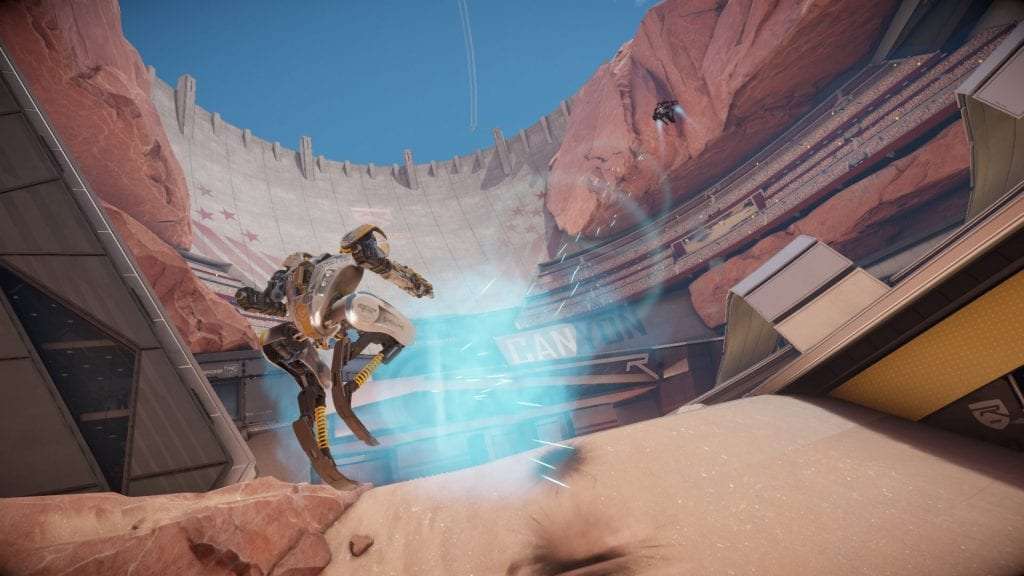 Overall, RIGS is a whole lot of fun. Its gameplay is fast paced and unrelenting and the guys in Guerrilla Cambridge have figured out exactly what is needed for a VR sports title. Extremely enjoyable, RIGS shows what the Sony’s new headset can do to truly transport you into a world that you simply can’t get in actual reality and is unbelievably cool looking whilst doing so!