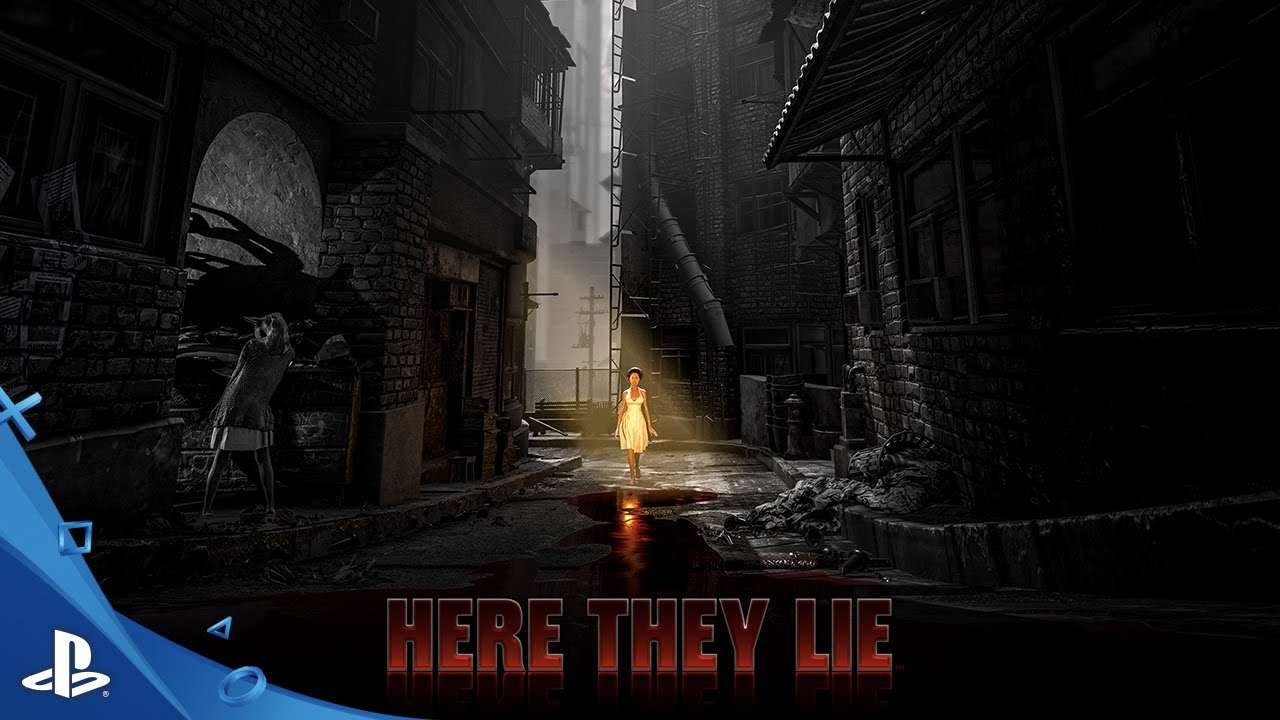 Here They Lie is a first-person explorer with a distinct horror flavouring. It’s not really a game whose plot I can summarise easily. Not for fear of spoilers, but rather because I don’t really have the first clue what was actually going on while I played it. You start out in a train station, a woman in a yellow dress talks to you for a bit and then you begin what I can only describe as a descent into hell.

This strange and unsettling reality is best summed up by describing the game’s death mechanic. It’s a fairly generous system. When you die, the game will usually drop you off right before you died, meaning no arduous trek to reclaim your progress. First, however, you wake up to a blood red sun rising out of the ground. As you walk towards it the corridor actually forms in front of you, eventually creating a door at the end of it. Walk through the door and you’ll exit close to wherever you died.

It’s a surreal experience and something that really needs to be seen to be believed, which is a pretty great way of describing the game itself. The world it builds for itself is constructed from familiar parts but is assembled in a way that seems just “off” enough to make you feel uneasy, even when you’re absolutely sure there is no danger around you. The (limited) audio that acts as your companion throughout your journey feeds into this feeling that something is every so slightly wrong, but you’re rarely able to put your finger on why.

Except when ghostly figures block your path unexpectedly or monsters try to eat your face off. Yes, Here They Lie has jump scares. It has a lot of jump scares. Maybe it’s just the very nature of gaming in virtual reality – whenever anything unexpected happens or appears right in your face, it’s actually appearing right in your face. Which is always startling, regardless of what type of game it is.

But the frequency with which Here They Lie relies on these jump scares in its latter stages quickly becomes an annoyance, especially following on from an opening 30 minutes that does such a great job of building tension and dread while relying on such cheap tactics sparsely. The overuse of these scares kills the games atmosphere. You stop looking around at the alien geometries and twisted world that Here They Lie creates and start simply looking out for the next thing that will pop out at you.

The idea is solid – you’ll walk in whatever direction you’re actually facing and you can use this blink ability to readjust your vision. This basically exists so that you don’t have to keep your head turned at an angle all the time. But Here They Lie has a third mechanic, and one that I believe precipitated my motion sickness. It will slowly turn the camera back to its starting position, putting the camera and your view constantly in motion unless you’re looking directly ahead at all times.

Some of these settings can be changed in the game, but these are Here They Lie’s default settings. It’s probably that you’ll play this way too because the game has a problem with explaining anything about itself. You’re never directed to a settings menu and you’re never told what the controls actually are, or how to play the game. While this isn’t a major problem, the game doesn’t require much from you other than walking and looking at stuff, there are moments when it needs to explain itself. I had no idea I had a flashlight for much of the games running time.

In the end, Here They Lie really is quite a strange game, both narratively and gameplay-mechanics wise. For a VR horror title, it definitely delivers on the jump scares many fans of the genre love but if you’re looking for a comprehensive storyline with clearly defined characters and storyline, I’m sorry to say that your out of luck. Here They Lie is quite a good looking game, even if the main colour palette being used is a merky grey/brown colour but it’s somewhat of a forgettable experience overall.