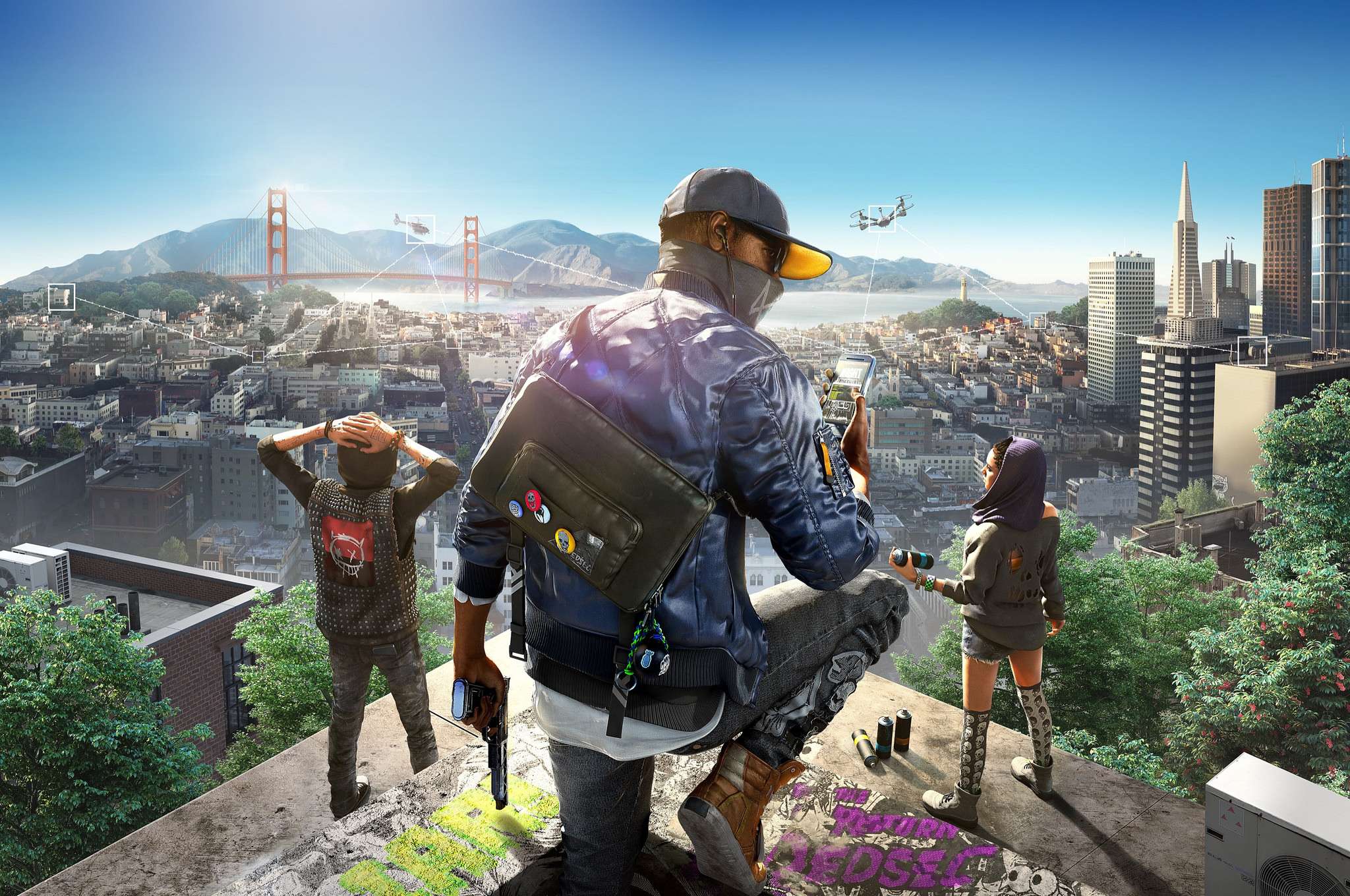 So the day has finally come and the release of Watch Dogs 2 is almost upon us. 2 years on from the less than flattering response to the first instalment in Ubisoft’s hacking franchise, Watch Dogs 2 has a lot of wrongs to make right and also needs to be a enjoyable game in its own right. Have they pulled it off? Is the new tone and setting enough to correct the errors of the past? Read on to find out what we thought of Watch Dogs 2. 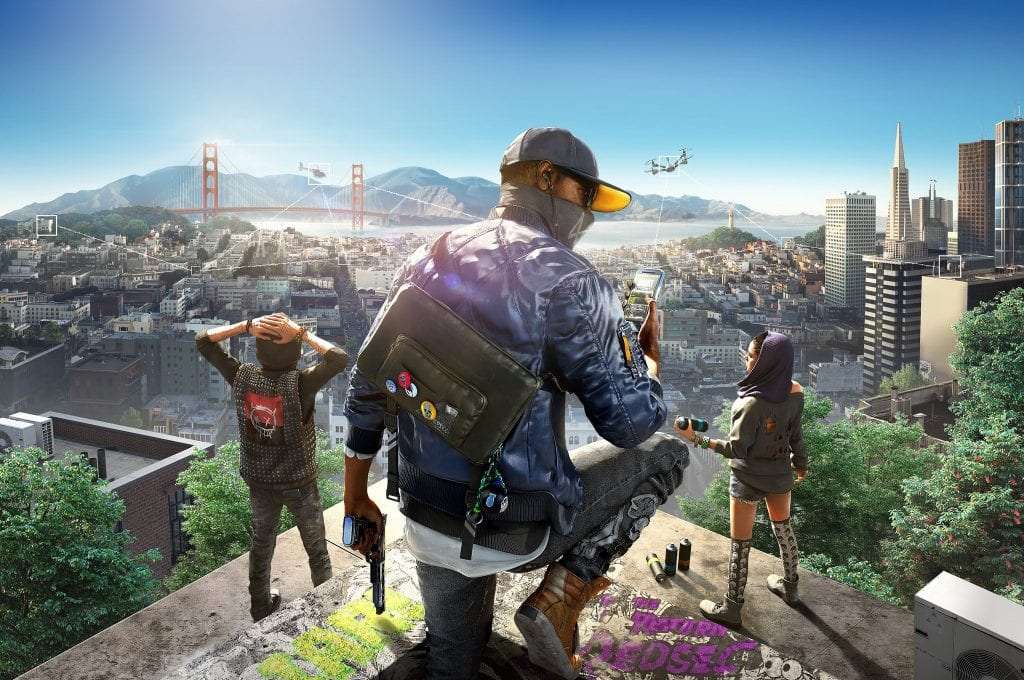 After being wrongly profiled as a criminal risk by a citywide operating system, Marcus Holloway, the main protagonist, investigates and finds rampant corporate corruption and manipulation of the public being carried out by fictional mega-corporation Blume. Marcus and his group of hackers, DedSec, wage a war to take down the system and return power to the people. 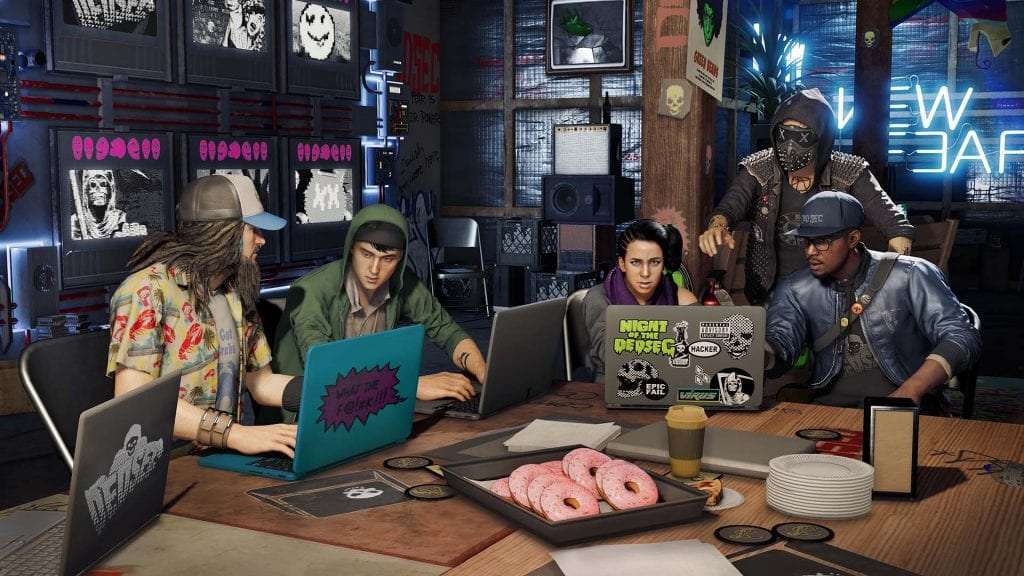 For any fans of the hit hacking TV series, Mr. Robot, this storyline sounds like an inter-actable version of the show and, to certain extents, it basically is, albeit with a much lighter tone. Gone are the heavy handed dialogue sequences of the first game with much more jovial and funny interactions between the main characters as all these hackings and break-ins are taking place.

Watch Dog 2’s gameplay can definitely be seen as an evolution of the first title’s mechanics with some nice additions such as the remote control devices you can play with and quicker and easier ways to hack the world around you and its inhabitants. Ubisoft have done a great job of creating a living, breathing world and the number of ways you can approach each of your missions is extremely impressive. 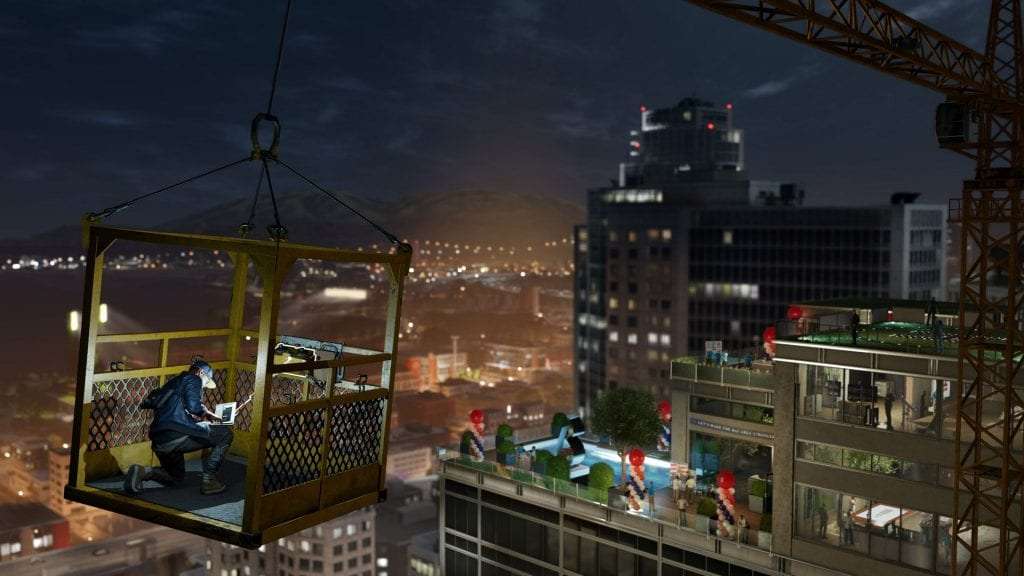 That being said, I must admit, I found the difficulty level went from 0 to 100 in a very short period of time and I found myself dying much more than I wanted to. Maybe it’s because I’m not actually as good at these type of games or maybe I have to rethink my approach to each of the missions, but it’s definitely something to be aware of. 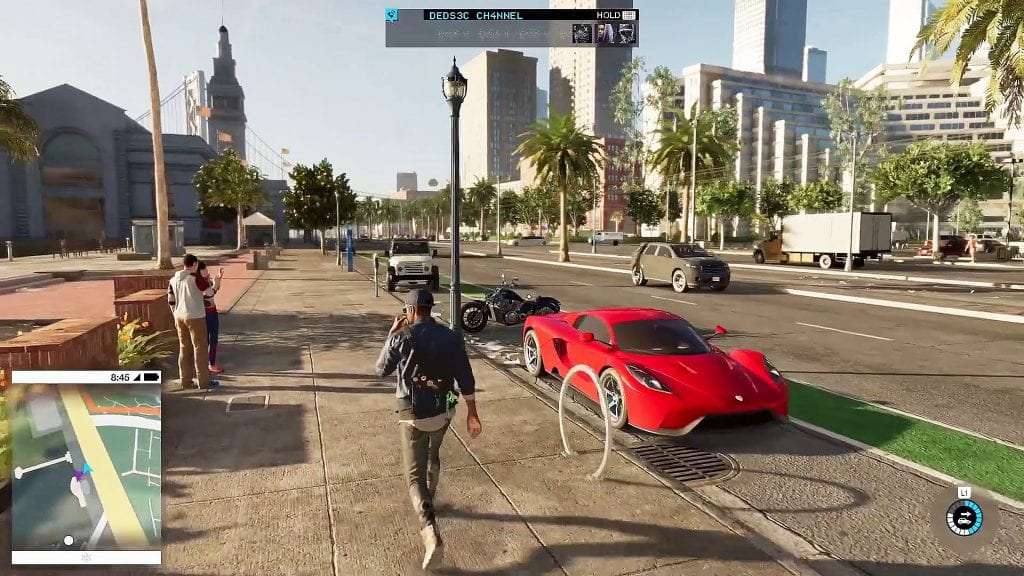 Even though you play as a vigilante, you definitely don’t have to blast your way through all of the missions and enemies you encounter as there are many ‘non-lethal’ ways to achieve your objectives. Unfortunately, due to to high difficulty level, I found myself gunning down most of bad guys in the missions but it was definitely enjoyable to finish certain missions without killing a single enemy.

Car handling has also received a much-needed improvement from the first game. Driving in Watch Dogs 2 is more streamlined and tightened so that it is now significantly less floaty and has an arcady feel to it which makes it far more accessible.

Set in a virtual version of San Francisco, Watch Dogs 2 looks absolutely gorgeous. We reviewed the game running on a PS4 Pro hooked up to a Full 1080p display and we were blown away at how good it looks, especially in certain areas like down at the beach or from one of the many sight-seeing view points. Even though I’ve never actually been to San Francisco, I feel Ubisoft have captured the tone and vibe of the city and, and I mentioned earlier, they’ve creating something that truly feels alive. 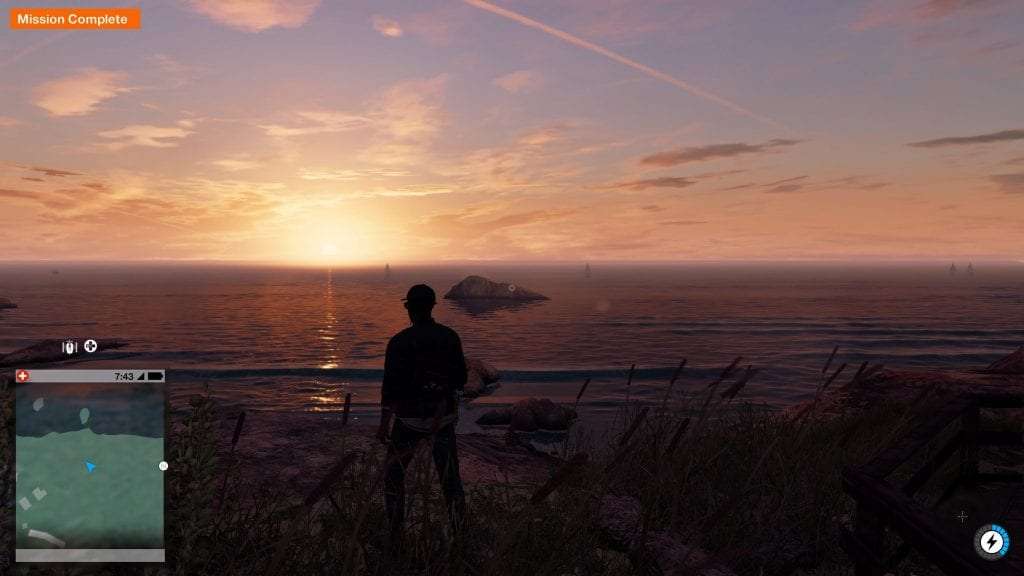 The NPCs all interact with each other in a believable way and the level of detail in each of the city’s boroughs and neighourhoods is fantastic. The lighting must also be commended as the day-night cycle looks great as you fly around the hilly streets of this iconic city. 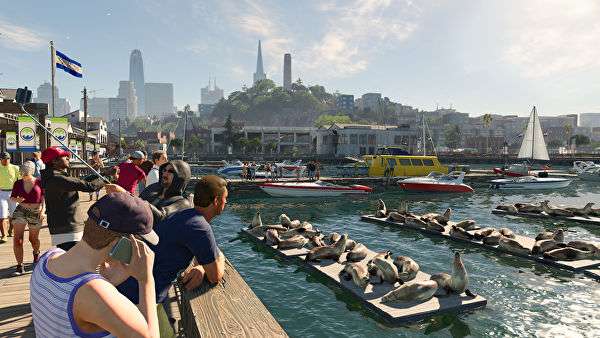 Having suffered a bit of a rocky start to its implementation, Ubisoft finally fixed the underlying issues plaguing the multiplayer section of the game and switched the service back on about a week after launch. With the ‘seamless multiplayer’ feature not activated, gamers are able to interact with other hackers from around the world in a variety of different game types. We had a serious amount of fun trying to hunt down anonymous hackers throughout our main storyline playthrough and the ability to add your fellow Watch Dogs player to help out with a difficult mission is also a great way to play.

Watch Dogs 2 had a lot to live up to. Not only did it have to right many of its predecessor’s wrongs, but it also had to hold its own and be a game worthy of your time and money. I, for one, absolutely love this game, from the way it looks to the way the hacking and missions are laid out.

I had way more fun playing as Marcus than I ever did playing as Aidan from the original Watch Dogs and I think choosing San Francisco as the setting was a very good idea. Everything from its tongue-in-cheek tone, beautiful recreation of a digital San Fransisco and well-thought out hacking mechanics make Watch Dogs 2 a joy to play. 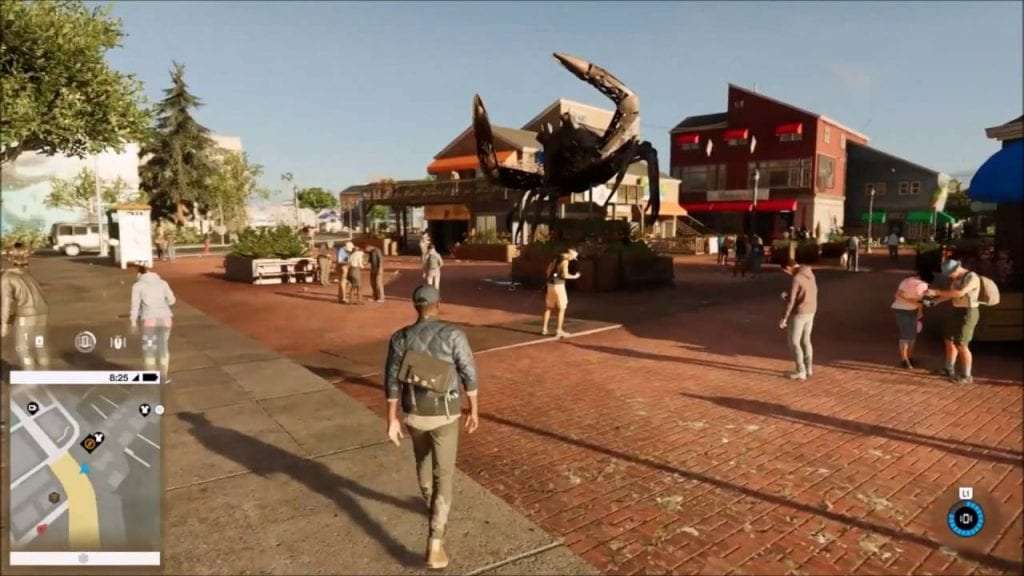 Watch Dogs 2 was reviewed using a review code supplied by Ubisoft Ireland and reviewed on a Playstation 4 Pro.

The game is available for PS4 and Xbox One from Tuesday, 15th November, 2016.