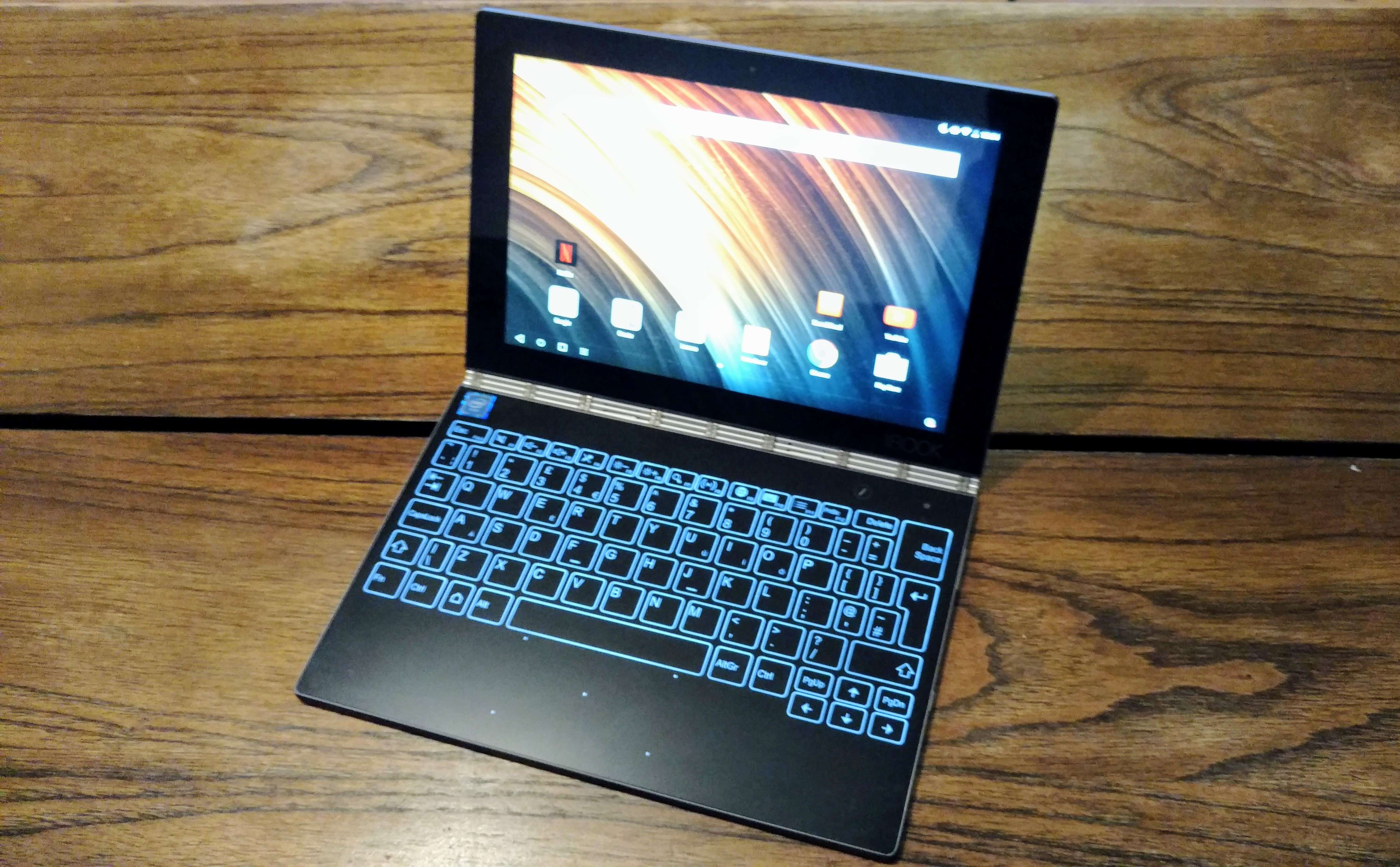 The Lenovo YOGA Book is one of many hybrid devices that attempt to streamline the best features of pre-existing technologies and adapt them to fit our lifestyles. The model we reviewed was a mobile version powered by Android, but there are also desktop-powered variants that run Windows 10. 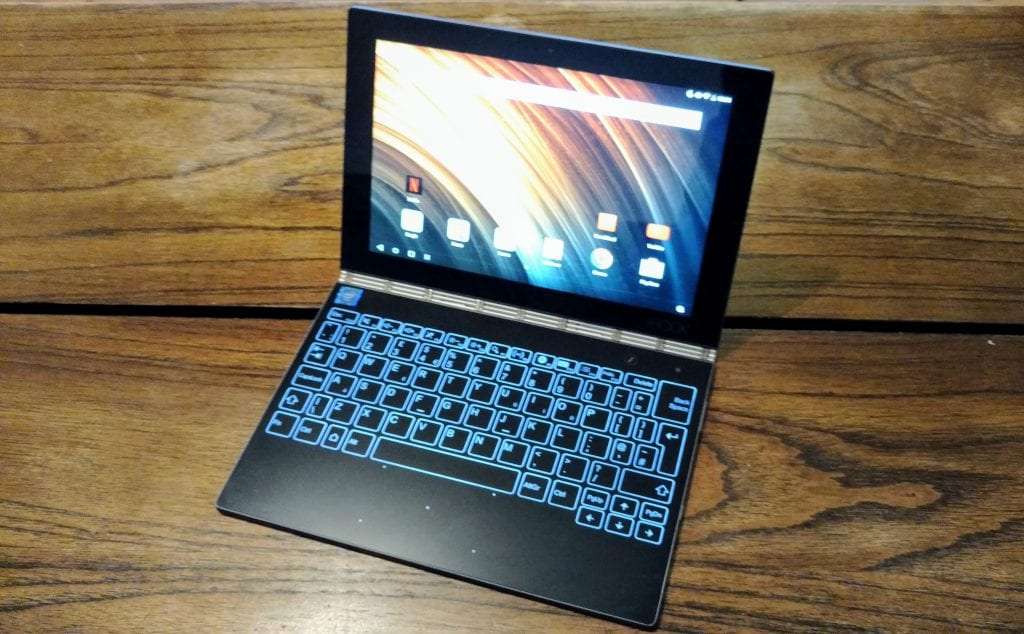 At first glance it looks like a small laptop. But the display is a touchscreen, so you can navigate with taps and swipes. Instead of a clamshell hinge, the display can bend completely forward or backward, so you can use it as a tablet with the keyboard slate concealed underneath.

I say keyboard slate because it’s just that – a smooth black slate where physical keyboard buttons would normally be. YOGA Book doesn’t have physical keys, only a backlit QWERTY keyboard (dubbed the “Halo keyboard”) that appears on the plate when the device is running in keyboard mode. Switch to drawing mode, and the keyboard disappears, letting you use the included stylus to write and draw instead. 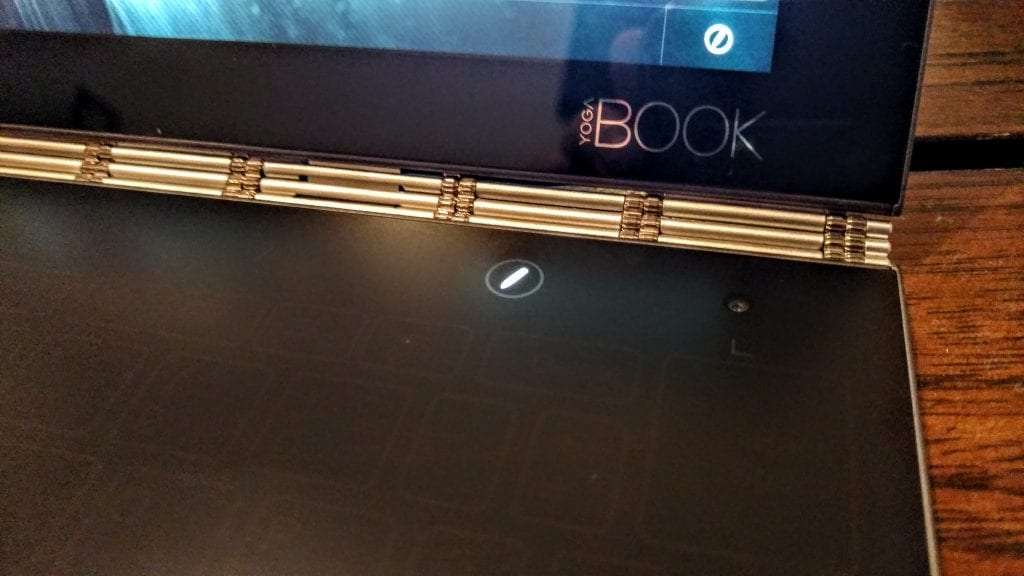 I welcome the concept of a 2-in-1 tablet/notebook, and even Lenovo’s interpretation of it. A book-sized device that you can use as casually as scrap paper or as intently as a computer? Sign me up. Delivered elegantly, it could become the ultimate note taker. That may not be a glamorous title, but it’s one that almost everyone could get some use from.

The YOGA Book stays promising beyond the first glance. While not exactly drool-worthy, the matte black metal case (also available in gold or gunmetal gray) is attractive enough. It occupies a sizing sweet spot: Not so small it’s impossible to type on, but not large enough to be inconvenient to carry. The YOGA Book is surprisingly light but still provides a solid foundation on which to write. It’s highly smudge and scratch resistant as well.

Since we’re accustomed to seeing mobile devices with little or no exposed hardware, I can’t decide if the Book’s “Watchband Hinge,” seen in previous YOGA devices, is eye-catching or an eyesore. It’s made up of bundled metal rods with rolling cylindrical gears. The hinge stays in place at every angle, and it’s easily adjustable when you need it to be. 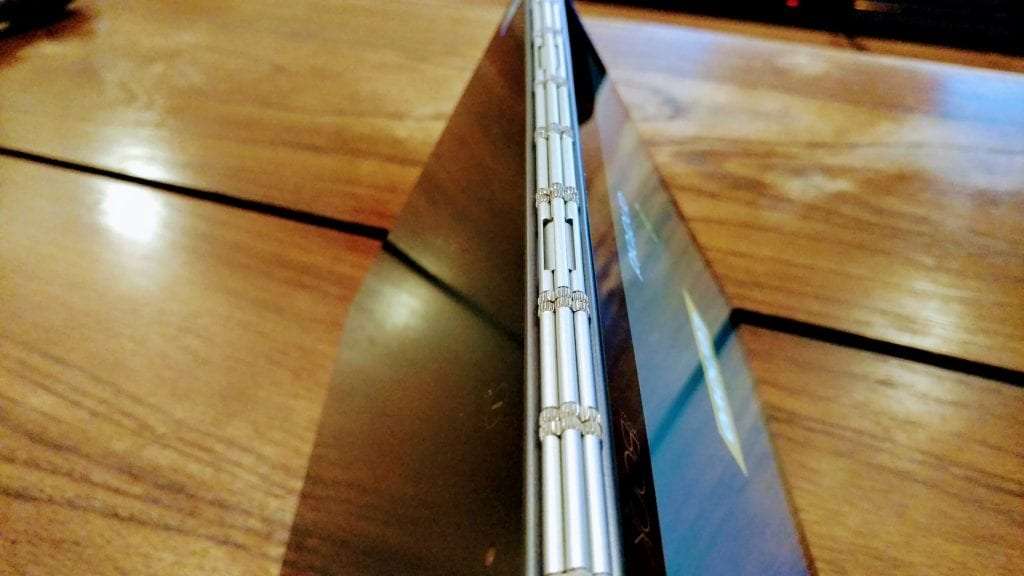 The screen is also nice and bright with some great detail and clarity when watching videos and viewing photos. I particularly enoyed using the device to watch films and Netflix on due to its light nature, pose-ability, great screen and more impressive Dolby powered speakers. 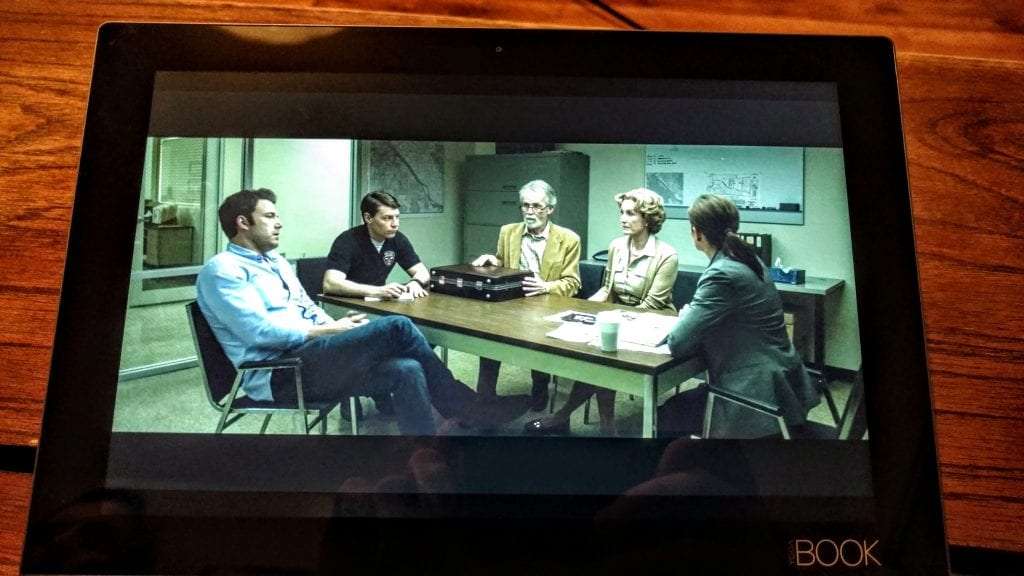 The YOGA Book’s outstanding feature is the number of different ways you can interact with it. Type on the Halo keyboard or draw on it with a stylus. Put a ballpoint tip on the stylus and you can draw on paper while it is digitized onscreen. Tap and swipe the display like a tablet, or use the trackpad below the keyboard.

The digital typing experience surpassed my expectations, even if it’s still a little questionable. After all, we have no problem texting away on our smartphones, and the YOGA Book is primarily mobile technology dressed up like a laptop. I actually found the unfamiliar size of the keyboard more disruptive than the lack of keys. 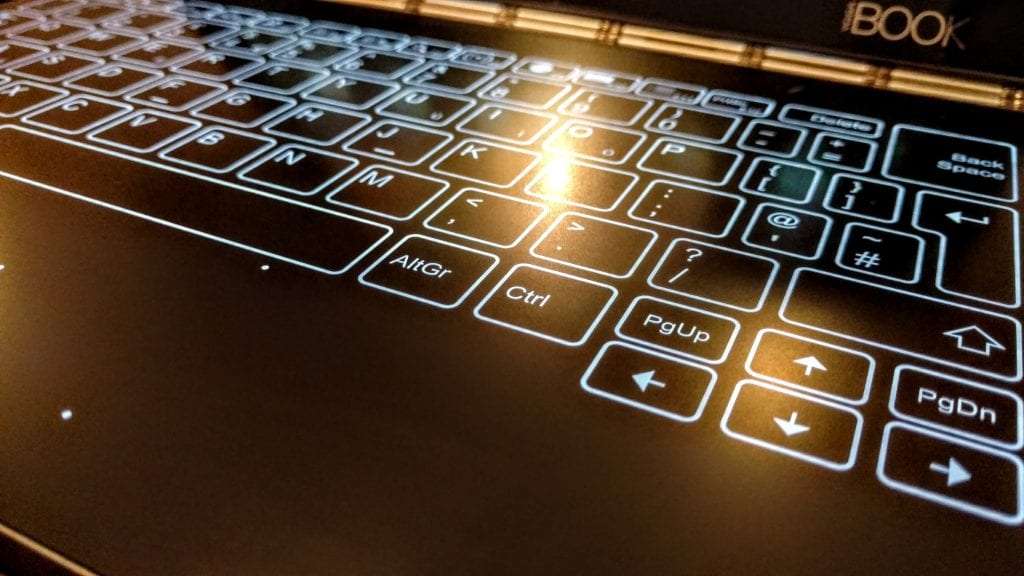 So my primary issue with the keyboard isn’t its lack of keys, but its jumbled feeling. I keep accidentally resting my hands on the trackpad as I type, because it’s crammed in so close. This annoyance is made worse by the fact that the trackpad seems to be the biggest weakness: Gestures don’t seem to work well, and it’s touchy at all the wrong times.

I have similar observations about using the Real Pen stylus. It’s sufficiently pressure-sensitive (2,048 levels) for most writing and doodling applications. It works well in isolation, but not always in a way that facilitates workflow.

Like any plastic-nibbed stylus, it can be used to draw directly on the keyboard area/drawing slate. My only disappointment here is that the stylus doesn’t work on the touchscreen, so when you’re using the YOGA Book as a tablet, it’s fingertip-only. 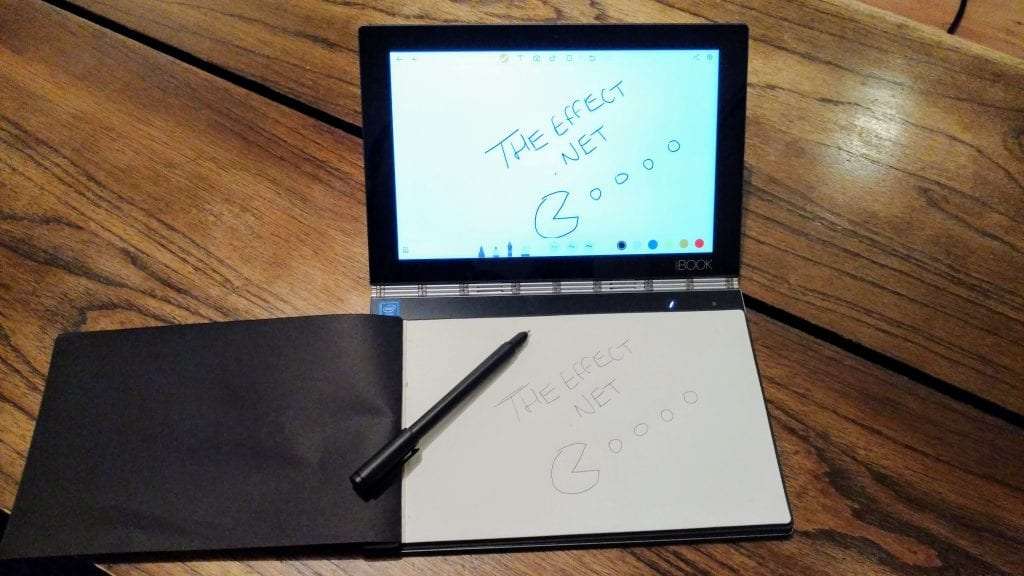 The other way to use the stylus is to swap out the plastic nib for one of the included ballpoint ones and write on actual paper. It’s designed to work with the bundled Book Pad, a pad of paper that magnetizes in place on top of the slate. When you write on the paper, your notes are magically digitized on screen. That perk is rare even among drawing tablets.

But with this multi-faceted nature comes complications. Changing the nibs is a clumsy process – you have to use the pen cap to work them out of the pen. There’s no convenient storage for the stylus or its nibs, and the device is not compatible with any other type of pen. On the plus side, I have noticed that other sheets of paper, placed on top of the keyboard slate, works just as well as the bundled Book Pad, though BYO-paper does not seem to fall within manufacturer’s recommendations. 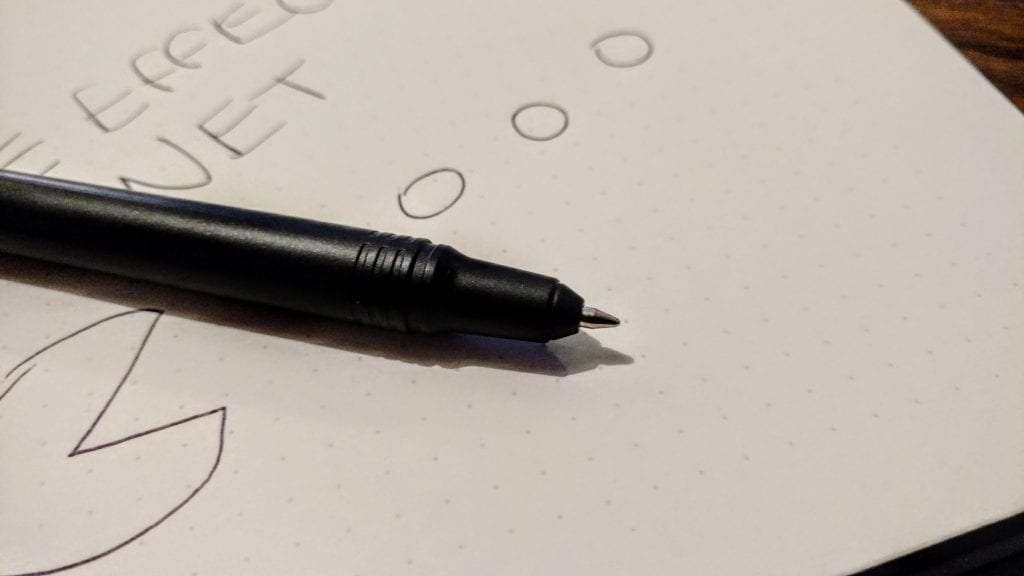 In the end, the dressed-up Android operating system shows promise, but it’s less than perfect. Even without trying the Windows version, I’m tempted to say it would be worth the upgrade to get away from the mobile operating system, though of course more robust software may introduce problems of its own.

One thing’s for sure, the Lenovo YOGA Book does have a strong battery; I squeezed at least 10 hours out of a full charge which is great for a full day in the office and, with it’s Quick Charge feature, it doesn’t take long to get the battery back up to a usable level once you’ve plugged it on for a bit. 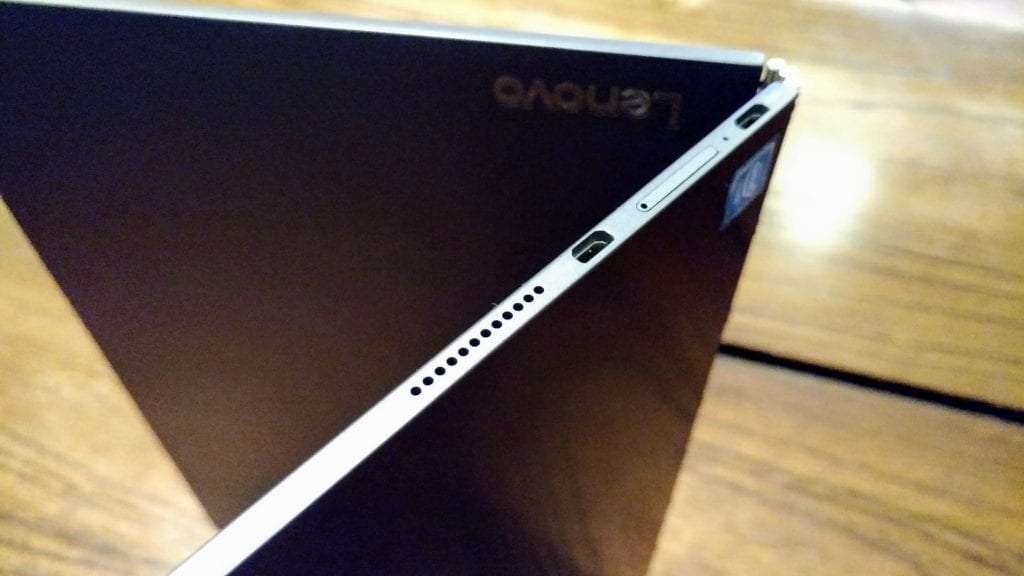 All in all, I’m impressed with the innovation and boldness of the Lenovo YOGA Book. Still, I can’t help but wonder if all those input options are overcomplicating things. Either way, they demand an operating system that can marry their functions seamlessly without breaking a sweat. That being said, it’s not a stretch of the imagination to picture college students or certain professionals using one of these and liking it very much for specific applications – as long as they are prepared to work through some rough spots.