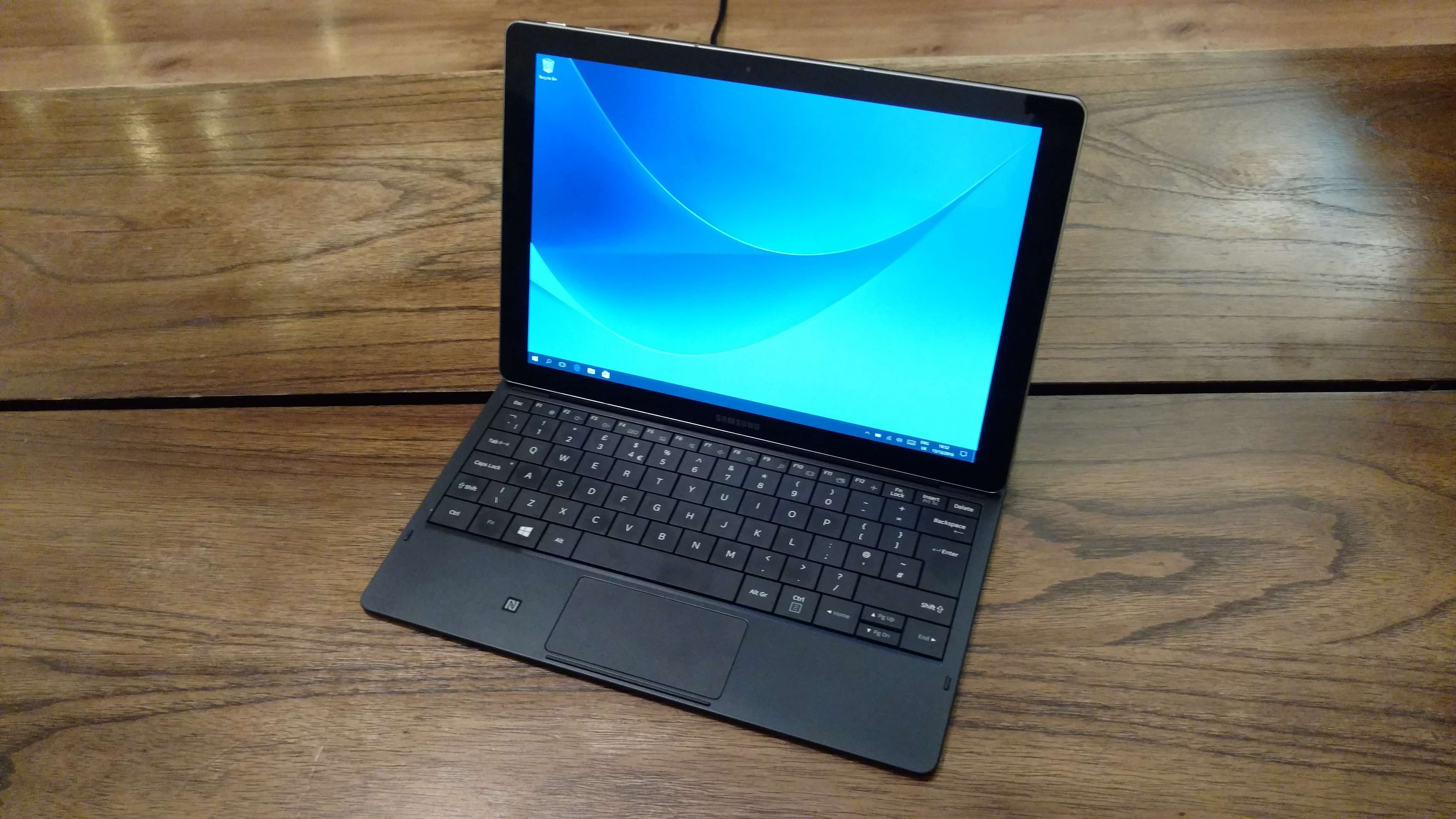 Our Samsung Galaxy TabPro S review takes a look at a true 2-in-1 Windows 10 tablet with a large screen, removable keyboard, and more.

Right out of the box, you definitely notice how sleek, thin, and light the Samsung Galaxy TabPro S tablet is. The sides are a rounded magnesium alloy finish with a barely noticeable edge, with the back of our review unit being a matte black with the rear facing camera near the top center. The front features a 12″ display with a black border about 1/2″ thick on the top and bottom and 3/4″ thick on each side. The Samsung logo is front and center at the bottom, and the front facing camera and adaptive brightness sensor is located on the top. 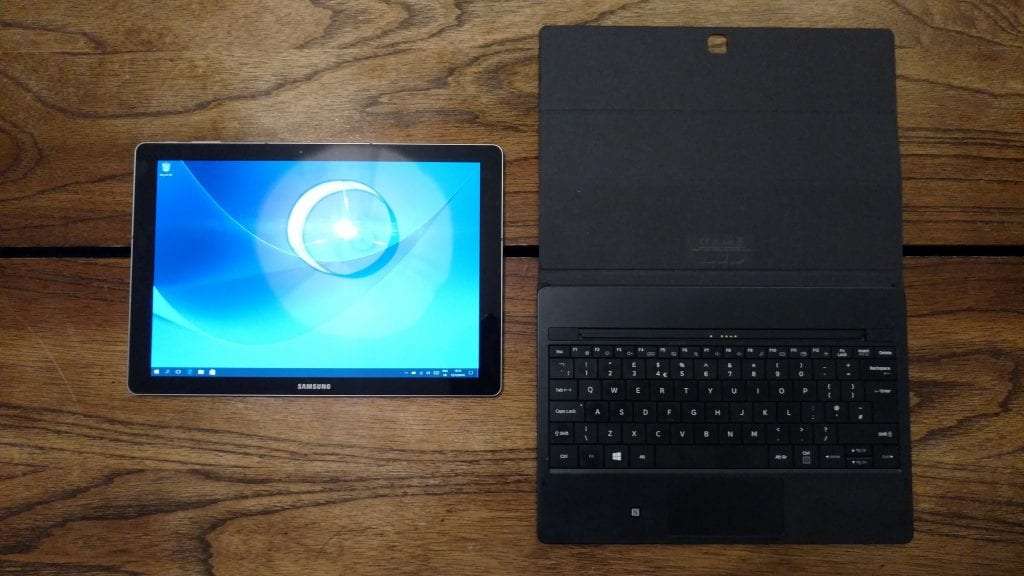 The left and right side of the tablet house one antenna and a speaker each, with the left also housing an additional button which brings up the Windows 10 menu when pressed. The right side also houses the lone USB-C port and headphone jack. The bottom of the tablet is where you’ll find the keyboard connector port, while the power, volume up/down rocker, and two more antennas are housed on the top.

The tablet snaps into the keyboard cover with ease, and has two positions for use — one your typical viewing angle, the other laying flatter towards the table or whatever surface you’re using the TabPro S on. The keyboard cover itself is fairly sturdy feeling, but flexes with very little effort. Other than that, typing with the keyboard isn’t too bad. The keys are pretty shallow, but given that the keyboard is only 4.9mm thick, that’s to be expected. 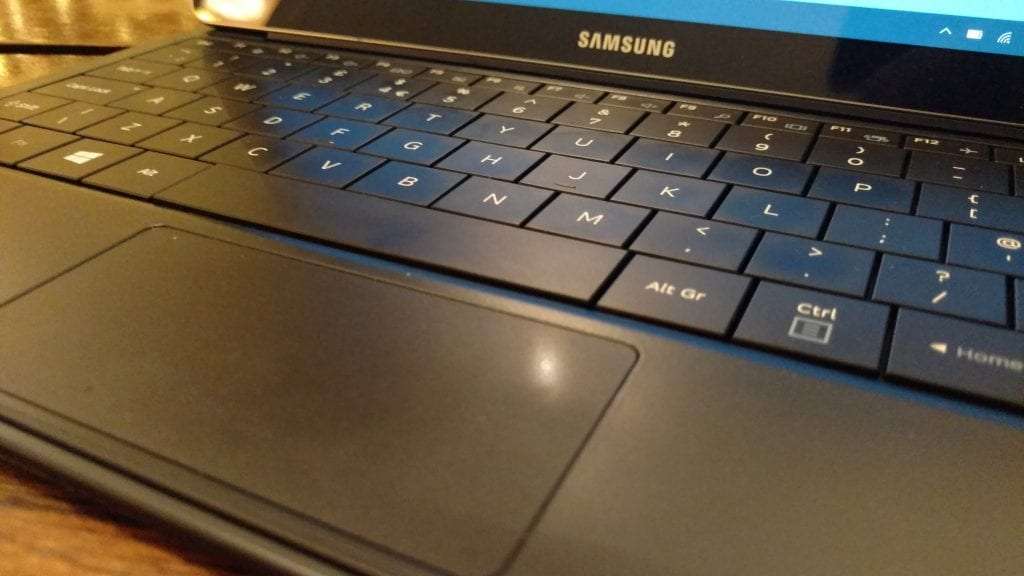 My only other complaint about the TabPro S design is the fact that there is only one USB-C port. While I love that Samsung is using USB-C on the tablet, having only one port can definitely be a detriment depending on your usage — not to mention the fact that it’s a newer standard as well and many accessories still use full sized or Micro-USB.

The 12″ Super AMOLED FHD+ display on the TabPro S is clear, vibrant, and crisp. In addition, the adaptive brightness setting available in the Windows 10 settings panel works well, and assists in prolonging battery life. In the Windows 10 settings panel, you can also select “Extra Settings” to access the Galaxy display settings which allow you to toggle between Adaptive Display, AMOLED Cinema, AMOLED Photo, and Basic which adjusts the color saturation and brightness based on Samsung presets. You can also set the time before the screen dims, as well as enable or disable Smart Dimming which prevents the screen from dimming if you are looking at it. 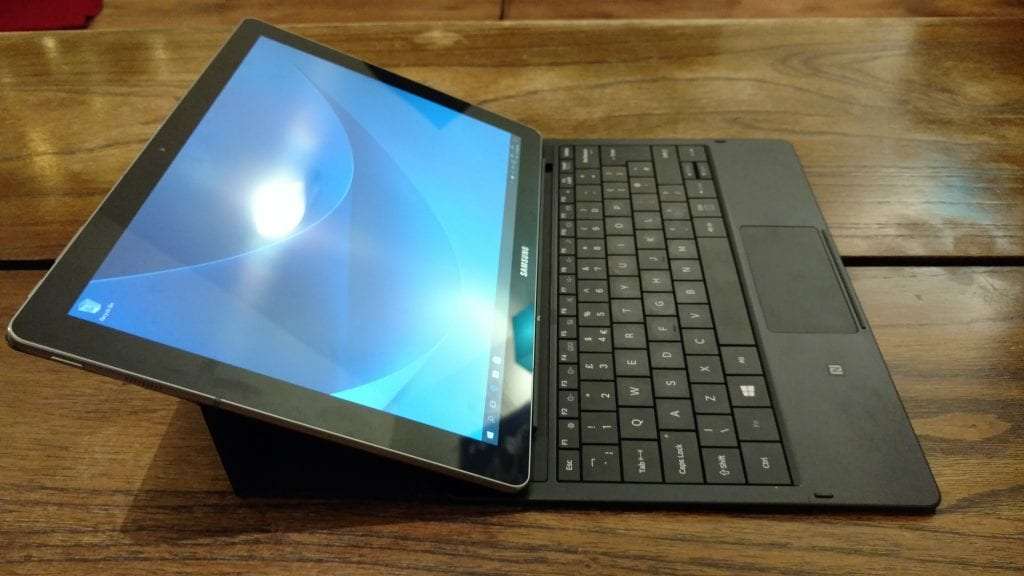 Our review unit shipped with Windows 10 Pro, and it ran with no issues on the Galaxy TabPro S. If you’re unfamiliar with how Windows 10 works in a 2-in-1 environment, it’s quite simple. When detached from the keyboard, you can switch to a tablet interface with larger icons and fewer icons on the screen, a bit like Windows 8.x. You can set it to ask each time, automatically switch between tablet or desktop mode, or disable tablet mode altogether.

If you happen to have a Samsung smartphone, Samsung Flow is perhaps the most useful of the apps. When you pair your phone with the TabPro S, you can unlock the tablet by tapping it with your phone and scanning your fingerprint on your phone, as well as read and reply to messages and notifications from your phone on the TabPro S, and finally easily use your phone as a hotspot for your tablet.

Now the big question, just how well does the Samsung Galaxy TabPro S perform? Quite well to be honest. I’ve had mixed results with Intel Core M processors before, but the TabPro S seems to be pretty lag free, especially while using it for business type applications like Office, internet browsing, and even Adobe Photoshop. Watching videos and streaming Netflix worked flawlessly as well. 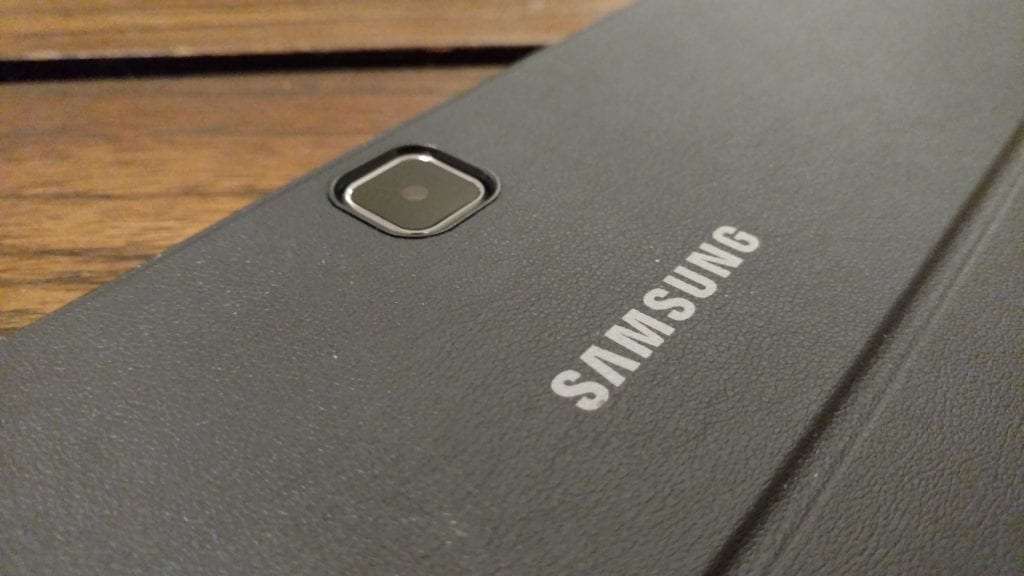 Overall, I had no issues with the performance on the TabPro S given its intended usage.

The Samsung Galaxy TabPro S sports dual speakers, one on each side of the tablet when in landscape view. The speakers are higher up, which is nice as I never noticed that I was covering the speakers when using the TabPro S as a tablet.

As far as sound quality goes, while it’s not the greatest, it’s by far not the worst I’ve heard in a tablet. The stereo speaker placement helps, but you shouldn’t expect the full range of tones by any means when listening to music, especially the lower bass tones. When watching movies and videos, the sound quality is acceptable, but again you’re going to probably want a decent set of headphones when listening to music or watching videos on the tablet.

Samsung claims up to 10.5 hours of battery life between charges and I was able to get between 6.5 and just over 8 hours in repeated tests, depending on what I was doing. When limiting the Galaxy TabPro S to more office like apps — word editing, photo editing, internet browsing, and the like, I was able to get closer to and over 8 hours. When consuming more media like video and music streaming, as expected the battery life dropped much more quickly. 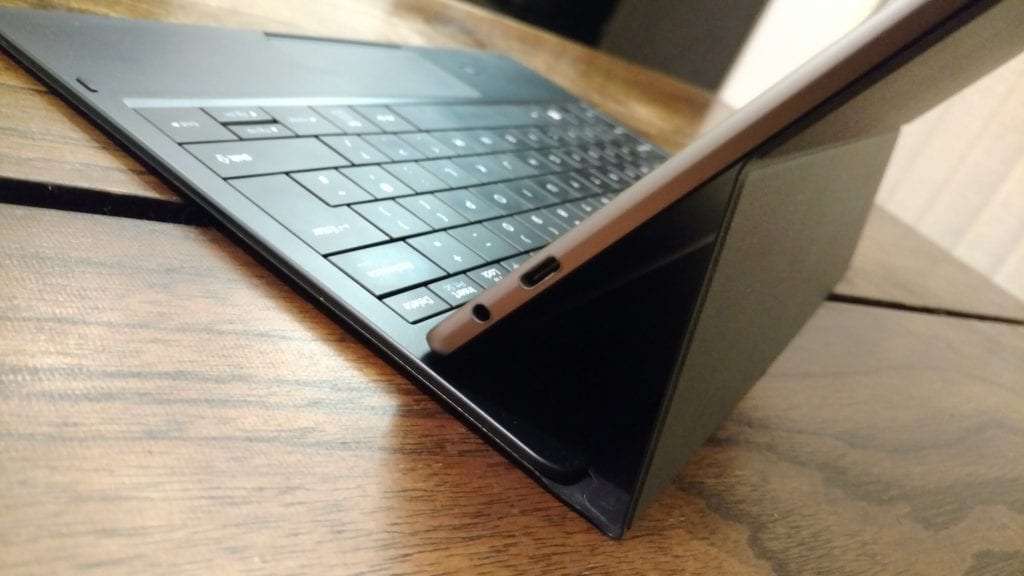 Recharging the battery is pretty quick with the Adaptive Fast Charging feature, with it taking just over 2 hours to charge fully from about 10%.

If you’re looking for a Windows 10 tablet with a detachable keyboard, the Samsung Galaxy TabPro S offers an affordable option without sacrificing performance. The fantastic screen, light weight, and decent battery life on the TabPro S definitely make it worth considering.

The Samsung Galaxy TabPro S has the following specifications (as tested) and features:

What’s in the box