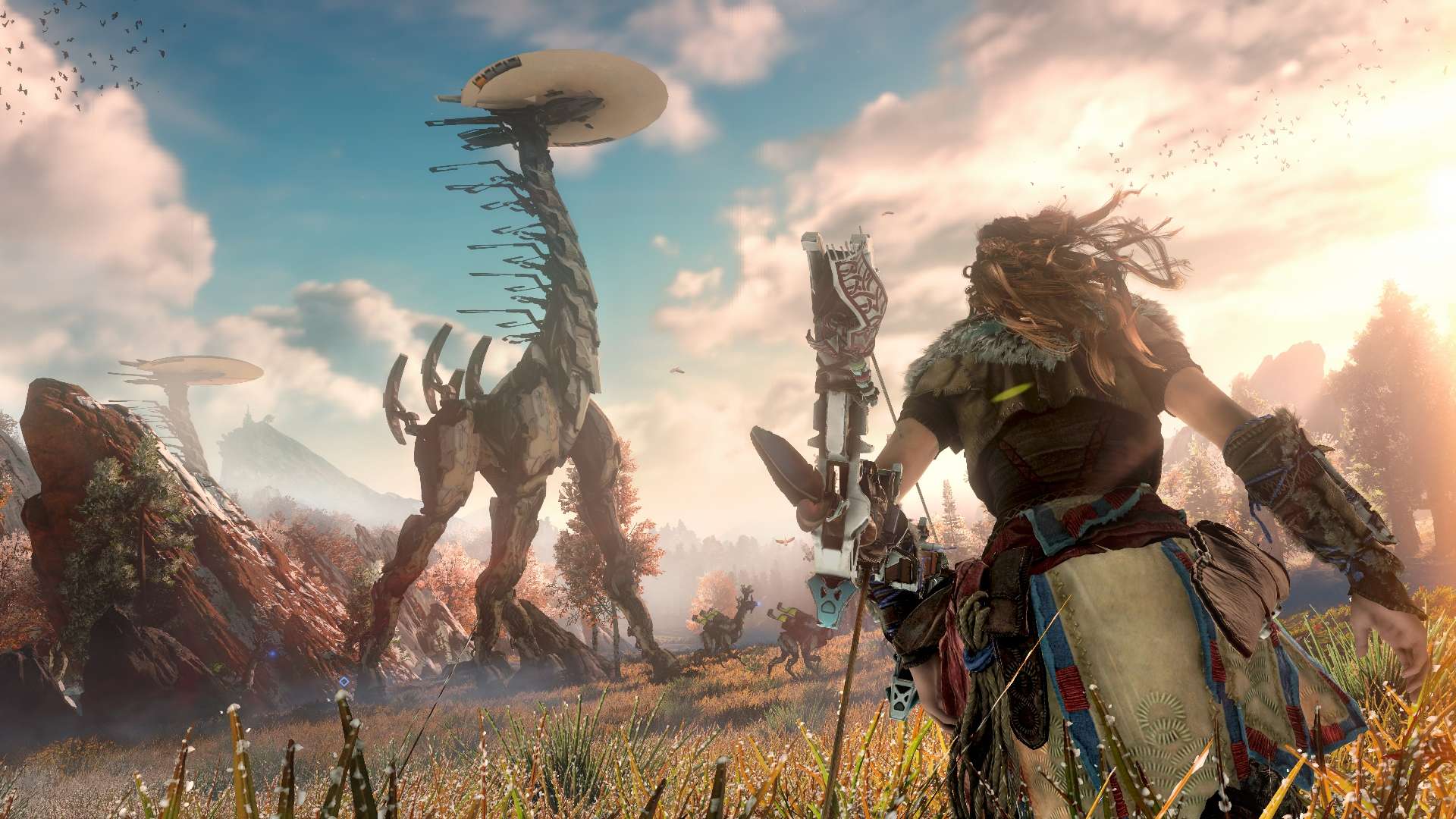 So Guerrilla Games’ newest Playstation 4 exclusive, Horizon Zero Dawn, is finally upon us. Is Sony’s newest flagship IP going to live up to the immense hype that has been created around it? Has Guerrilla Games, famous for their FPS franchise, Killzone, created an open-world RPG worthy of your money? Read on to find out in our full review of Horizon Zero Dawn. 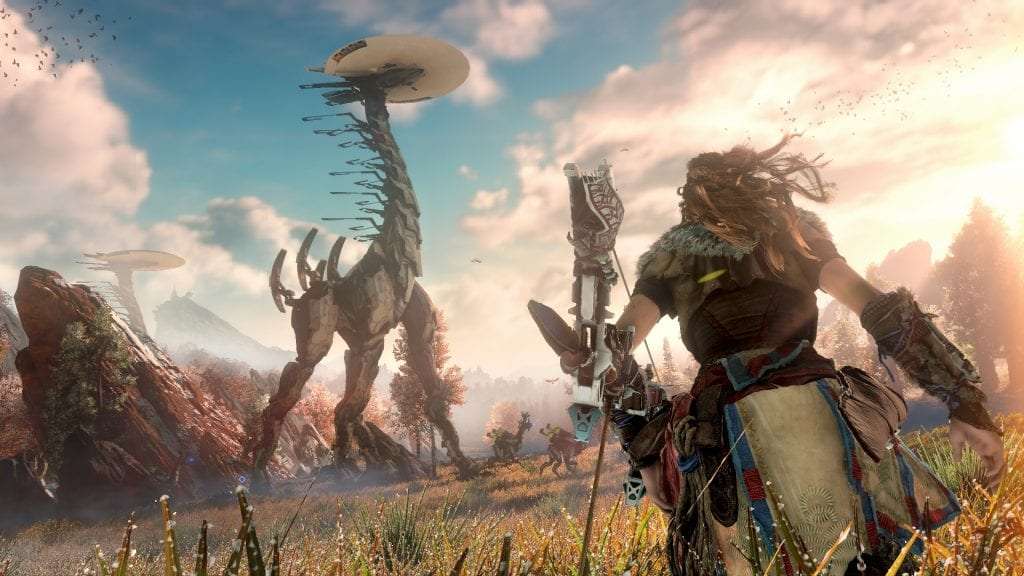 “Outside of the limited safety of the Nora’s huts and wooden barricades, dinosaur-like robots, who’s origins are unknown, prowl the wilderness.”

In Horizon Zero Dawn, you play as Aloy, a lifelong outcast of the Nora Tribe, a society which has strong matriarchal structures running through it and one which has shunned you from their shelter. Rost, another outcast from the tribe takes it upon himself to raise you and teach you all you need to know so that you can fend for your own survival in the wilds of the future. 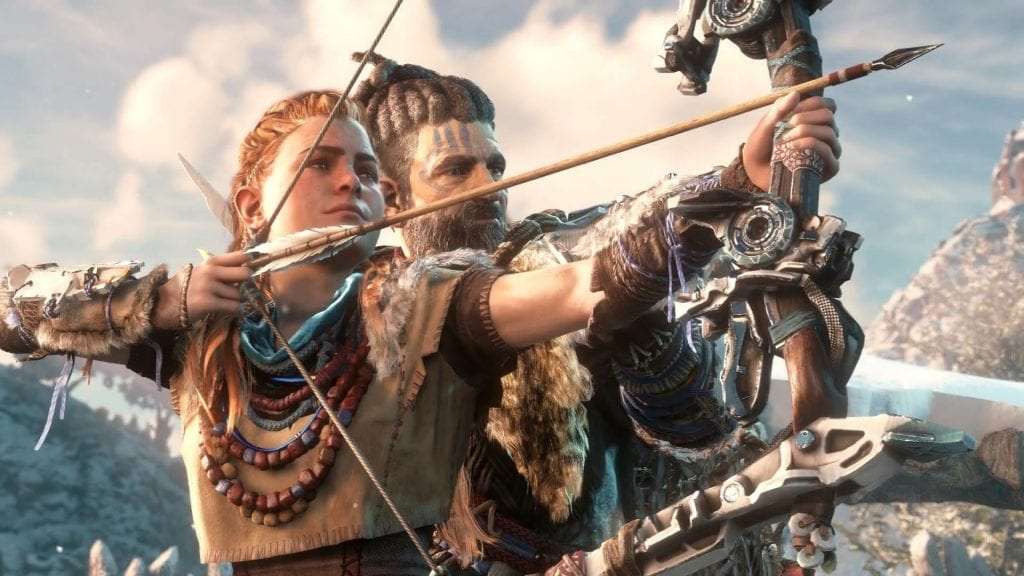 In a time long after our own advanced civilisations have ceased to be, the members of the Nora tribe have forged their own new sets of beliefs and hold the ‘All-Mother’ to be the most sacred of all. She is seen as the goddess of nature and all encompassing but, seeing as Aloy has been an outcast for so long, she is much less inclined to believe so blindly in the gospel of the Nora tribe.

Outside of the limited safety of the Nora’s huts and wooden barricades, dinosaur-like robots, who’s origins are unknown, prowl the wilderness. Constructed of precious resources and complex mechanic parts, Aloy has become an expert in tracking and hunting down these metal monsters to help her create and craft newer and better weapons and tools. 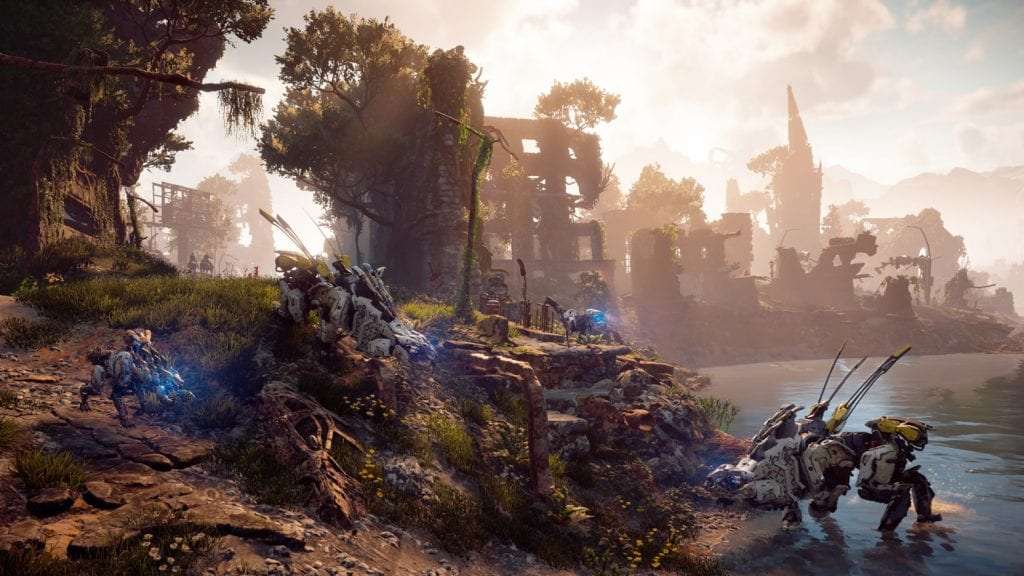 The overall story arc for Horizon Zero Dawn revolves around Aloy’s relationship with technology, nature and motherhood, with the last theme being the most prominent given that Aloy is unsure who her own mother is. It’s this strand in particular that drives the story forward and forges a compelling narrative that made it hard for me to put down the controller as all I wanted to do was find out about Aloy, her past and her future.

Many RPG fans might have been worried as to the depth, or lack thereof, of the crafting and upgrading systems in place in Horizon Zero Dawn but, I for one, can say that Guerrilla Games have nailed it. The systems they’ve created are extremely robust and allows you to modify weapons, clothing and other items with unique abilities. 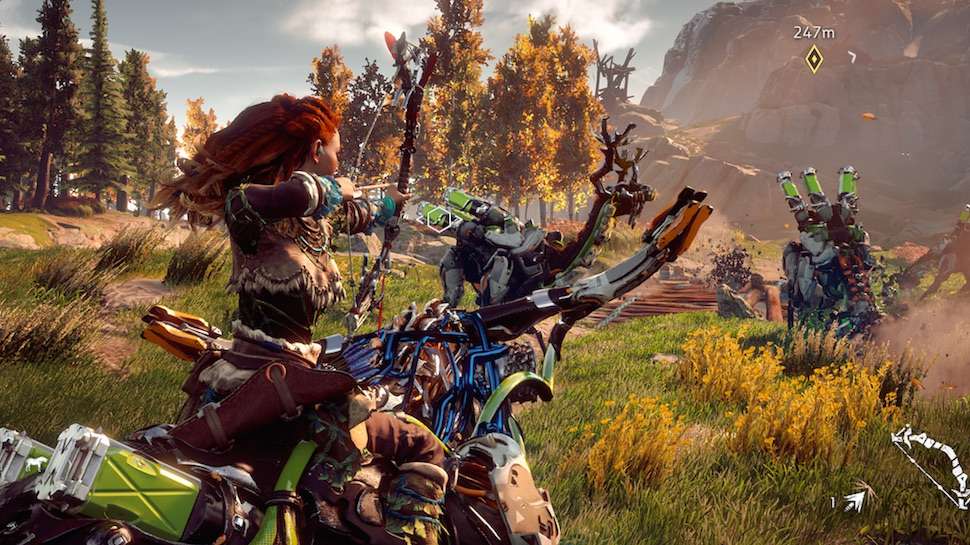 It also allows you to build a wide range of tools and traps along with Aloy herself being a weapon in her own right and having an upgradeable system in place for her own abilities and skills. All of these systems allow players to craft their very own unique combat style and they completely open up combat scenes in engaging and entertaining ways.

The game world itself is huge and extremely dense with items to forge, side missions to complete and characters to meet. Guerrilla Games has really done its homework and proved that they are more than capable of created an engaging open world game. The landscape is also littered with save points in the form of giant campfires which act as fast travel sites if you don’t feel like traversing the miles of mysterious wilderness.

Another cool gameplay feature is, early on in the game, Aloy finds a certain piece of technology that allows her to ‘override’ a selection of the robots to let her use them to her advantage. In the case of the Striders (the horse-like robots), once you perform an override on one, you’ll then have the ability to ride it around to make traversing the wilderness quite a bit easier. You can also override the Watchers (the velociraptor-looking ones) to turn on their own and attack the other robots on your behalf which is very handy when you find yourself outnumbered.

“…I found myself saying, “God, this is a fantastic looking game” out loud, multiple times.”

Horizon Zero Dawn is, hands down, the best looking game I’ve ever played. What Guerrilla Games has created here is something truly beautiful. From the vast and varied landscapes and locations to a jaw-dropping lighting system and day/night cycle, I found myself saying, “God, this is a fantastic looking game” out loud, multiple times. 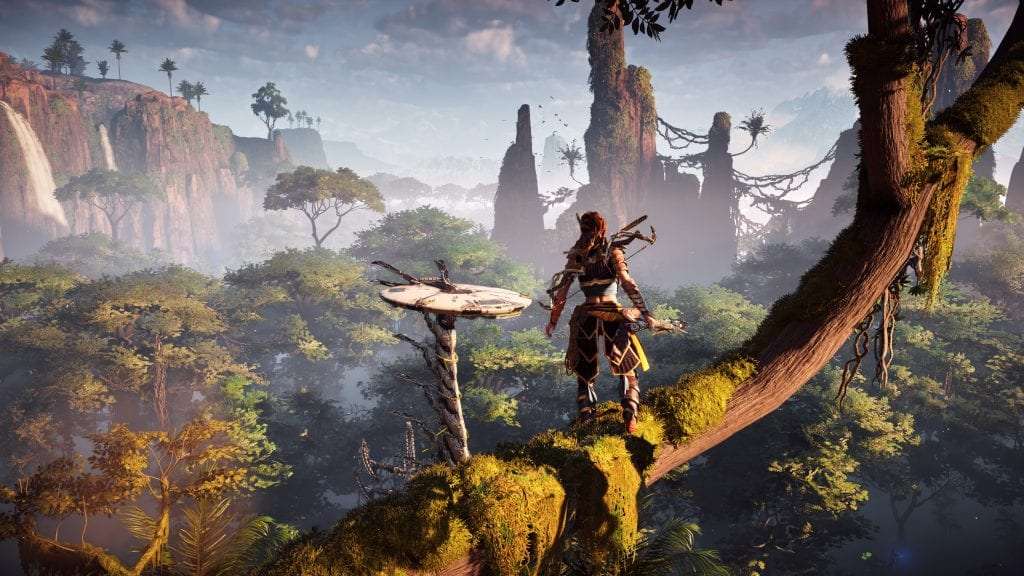 The art direction is unique and familiar all at the same time. They’ve managed to merge the tribesmen-like stylings of the various villages and their inhabitants with the extremely futuristic and complex designs and movements of the robots creatures that roam the wilderness. 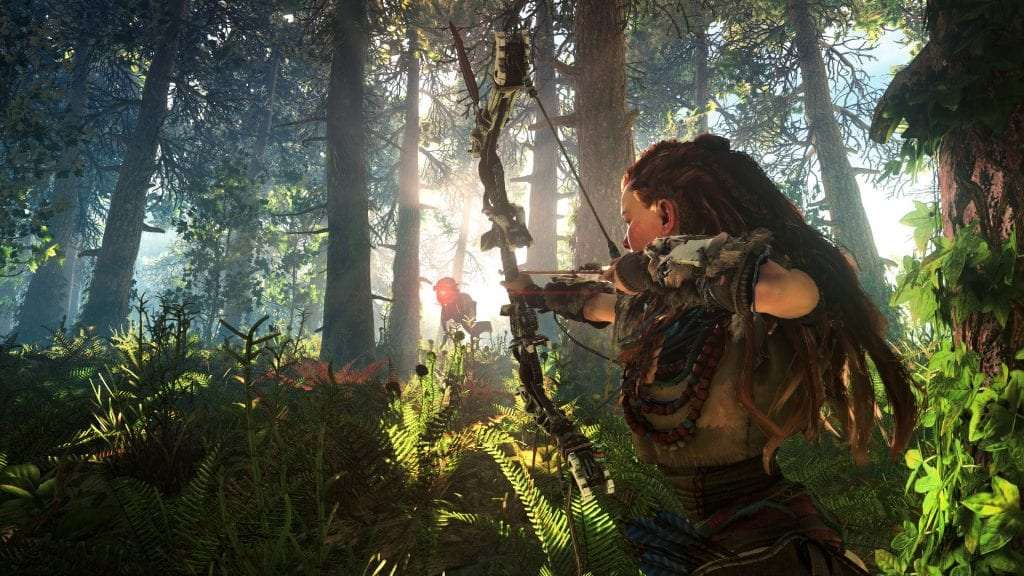 From the snow capped mountains to the baron and dusty desert plains, the variety of locales and colour palettes are simple stunning. Guerrilla Games has set the benchmark for what massive RPG games could and should look like going forward from a technical standpoint alone.

“…Horizon Zero Dawn is an impressive title, no matter what way you look at it.”

Having been looking forward to reviewing this game ever since it was announced back at E3 2015, Horizon Zero Dawn was a game I had personally hyped up in my own head. Now, after playing the game for more than 40 hours, its clear to me that Guerrilla Games has created something pretty special here.

They’ve managed to merge a compelling narrative, fantastically precise and complex gameplay and jaw-dropping graphics into one unbelievable package. Horizon Zero Dawn is an impressive title, no matter what way you look at it.

Horizon Zero Dawn launches on March 1st, 2017. You can pre-order it here.

The game was reviewed on a Playstation 4 Pro system with a review copy of the game sent to TheEffect.Net from Sony Playstation Ireland.