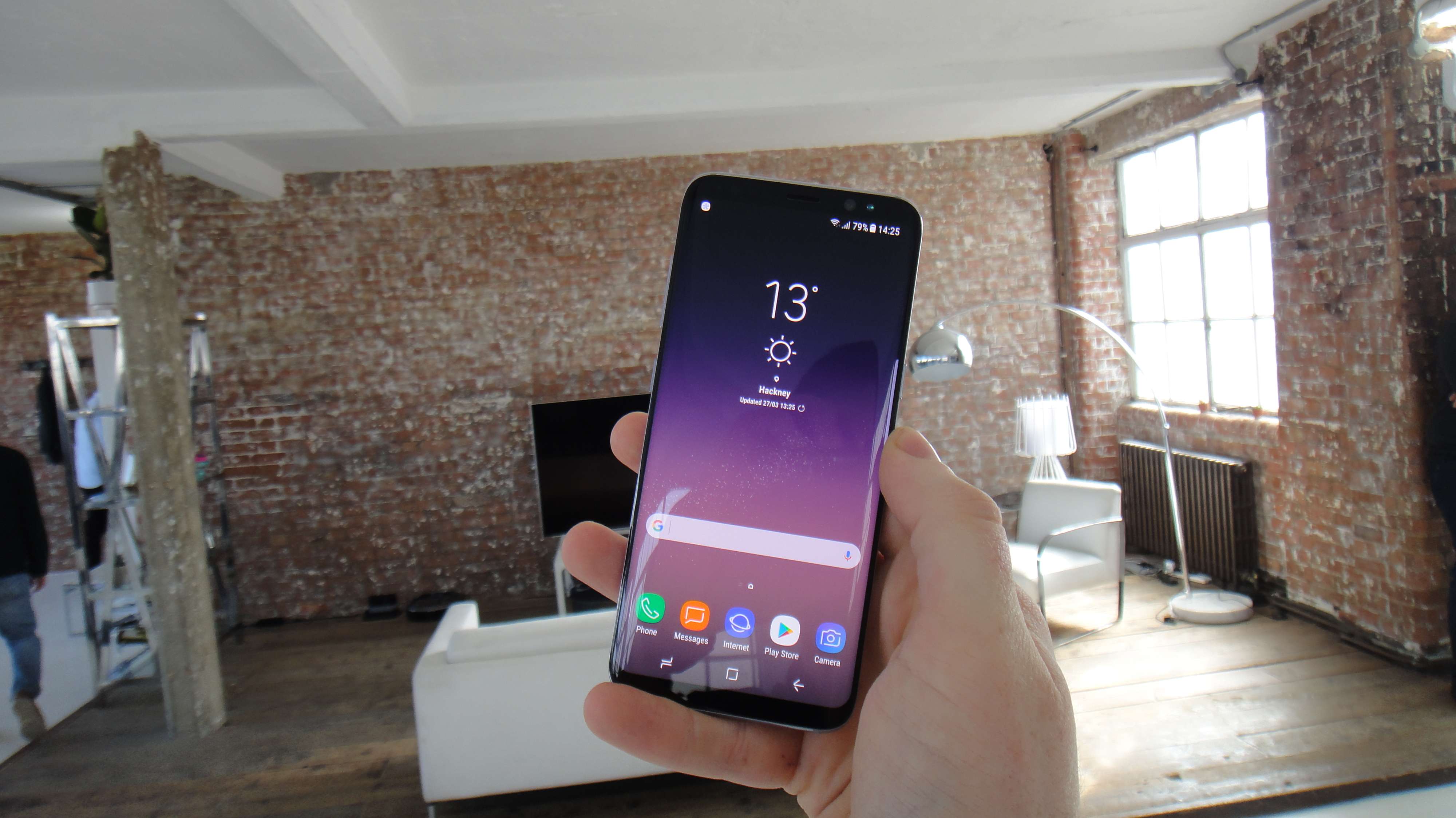 So Samsung’s newest flagships, the Galaxy S8 and Galaxy S8+ are finally official and we’ve been lucky enough to get some hands-on time with the new units at a press event in London this week. To start and, unsurprisingly, the devices match what has been leaked over the past couple of weeks but, something the leaks weren’t able to convey was just how impressive these two new handsets are in the flesh. 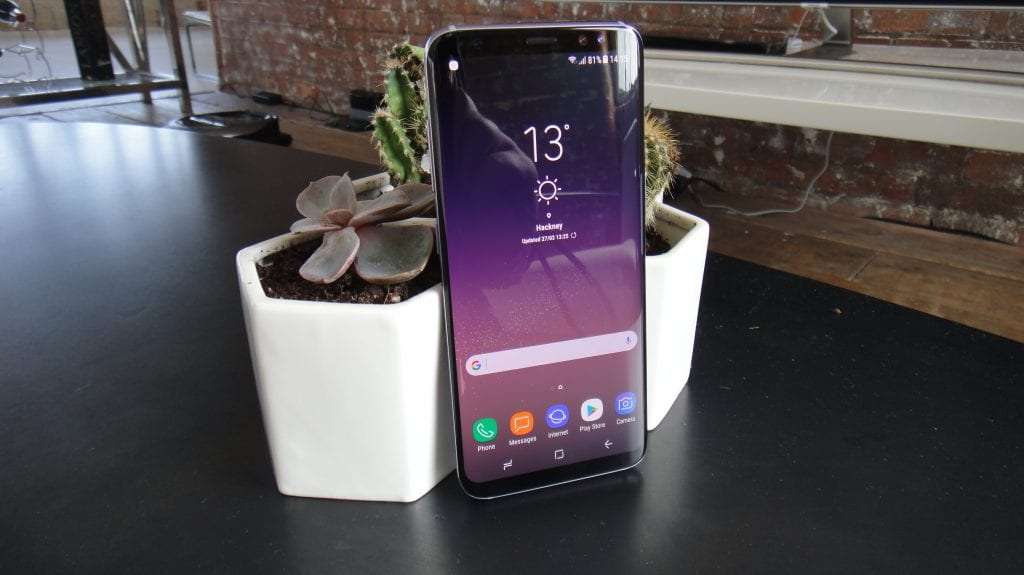 The new Samsung Galaxy S8 and S8+ really are at the cutting edge when it comes to smartphone design with their “Infinite Displays” that take up the vast majority of the front of both devices. Admittedly, there’s no denying that these phones are bigger than usual smartphones but Samsung has done a great job of packing in as much screen as possible into an impressively small overall footprint. 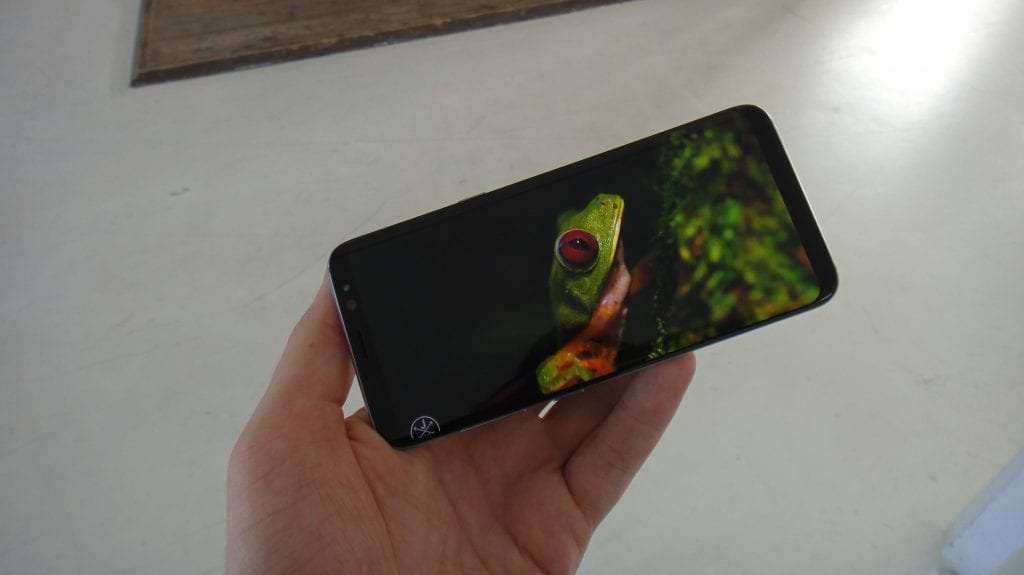 The Galaxy S8 has a 5.8″ 18.5.9 ratio screen that’s capable of HDR which really has to be seen to be believed. The S8+ is packing a similar screen in terms of specs but is larger at 6.2″ diagonally. Both phones are also officially the world’s first mobile devices to be certified by the UHD Alliance as MOBILE HDR PREMIUM.

On the right hand side of the device is the lock and unlock button, the sim card and Micro SD card slot is located on the top, the USB Type C charger and speaker grill on the bottom and your volume rocker and dedicated Bixby button on the left-hand side (more on this below). We’re slightly disappointed that the ear piece on the front of the device isn’t a secondary speaker like the set up found on the iPhone 7 and 7 Plus but I guess, seeing as the bezel is so thin, it might have been too much to pack in alongside all the other sensors and cameras. Speaking of which, Samsung have brought back the Iris scanner we first saw in the Note 7 to the top of both devices so you can unlock your phone with your eyes. 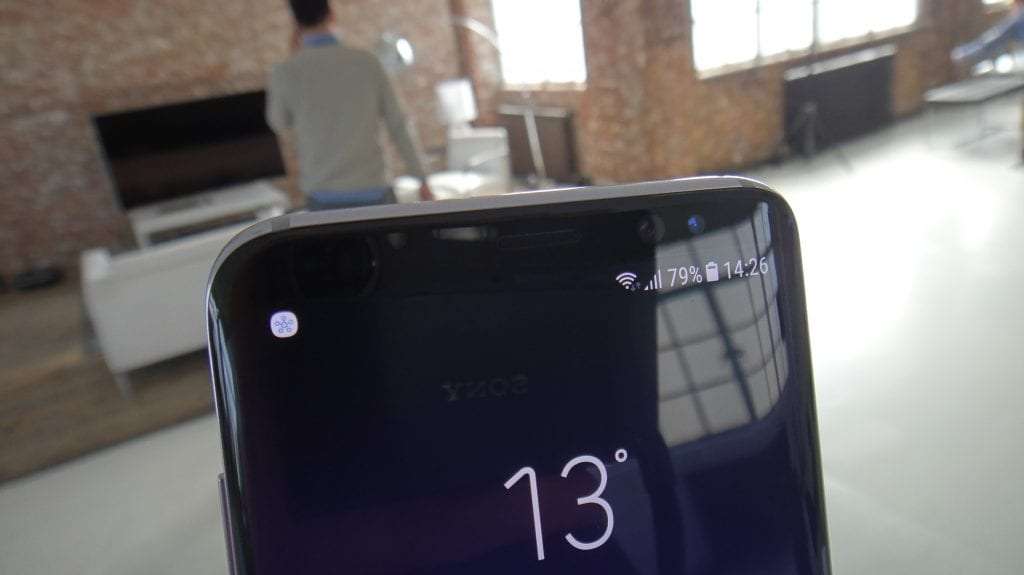 Samsung also told us that they’ve managed to embed the home button for the device into the bottom of the screen and it’s also pressure sensitive. How this will actually be implemented into other features on the phone has yet to be seen but we found this new button set up to be responsive and intuitive to use in the time we played with the phone. 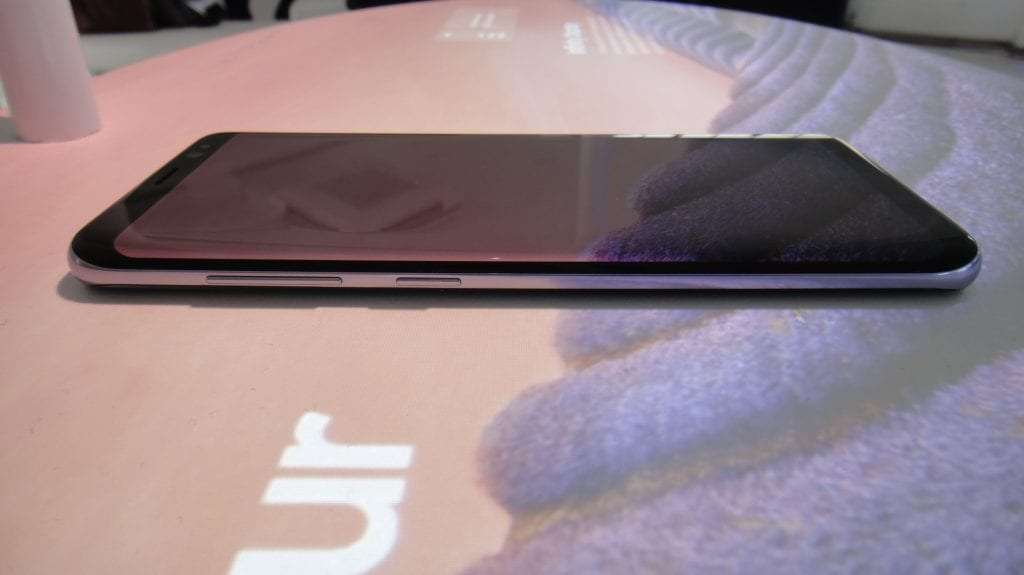 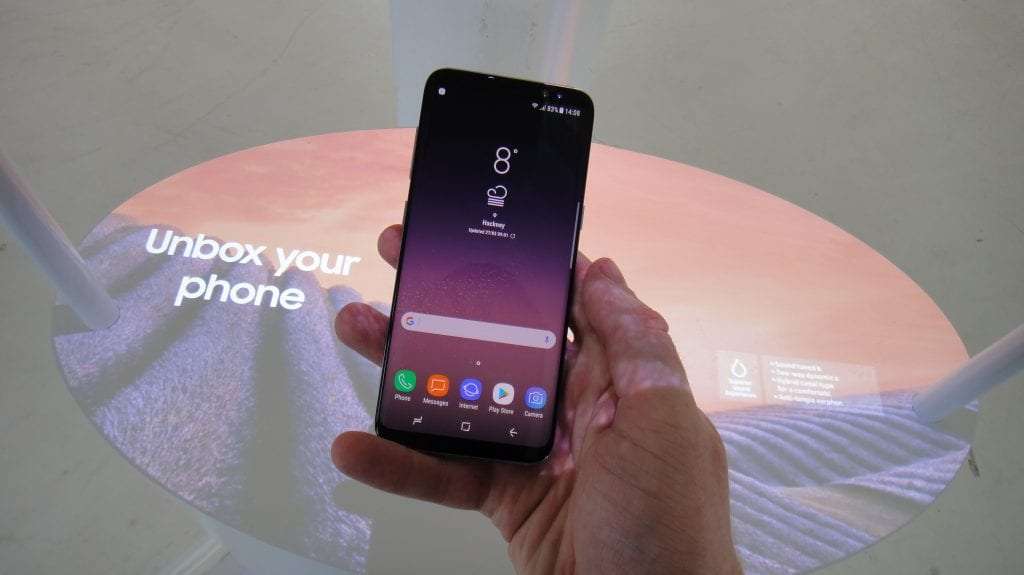 On the back, you’ll find your 12MP Dual Pixel camera with the newly-located fingerprint scanner along with the single-led flash. We must admit, the two devices feel incredibly well in the hand and are well-balanced with a pleasant weight to both. 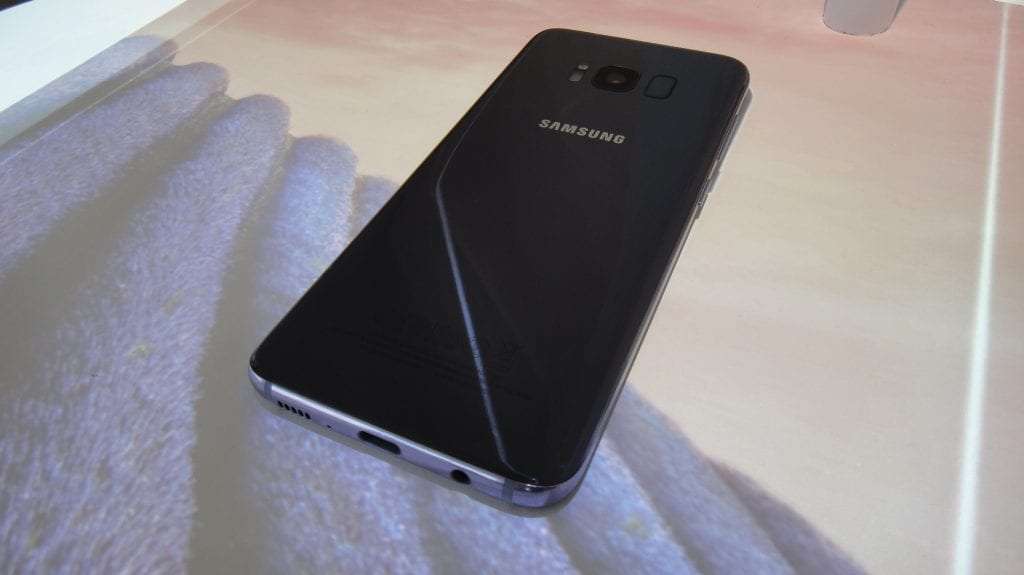 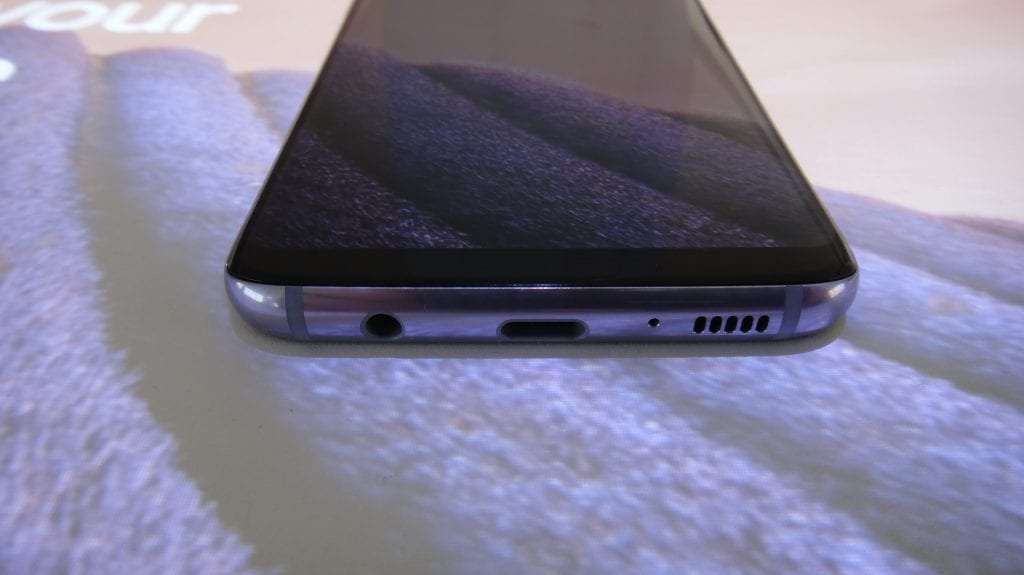 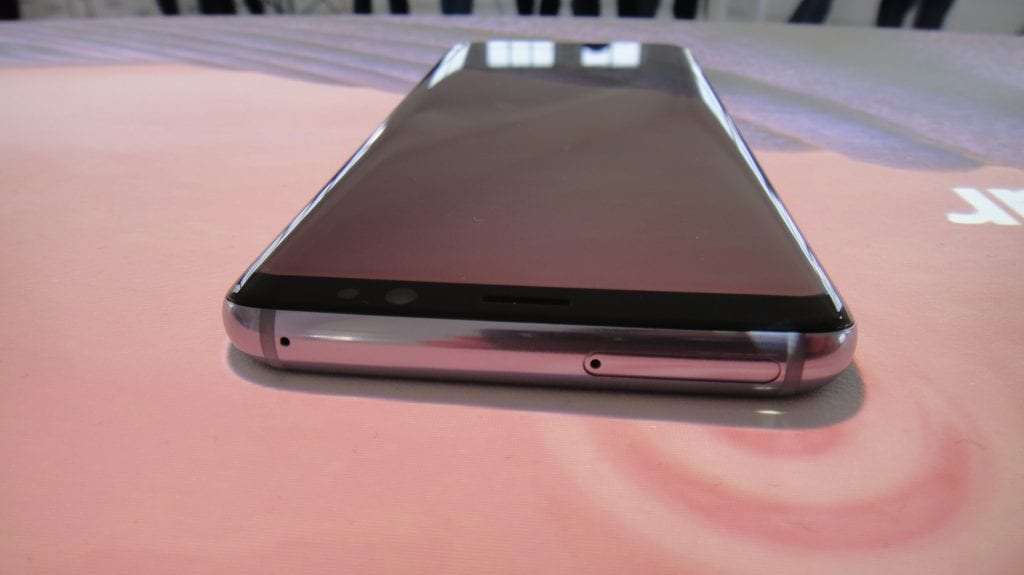 The devices come in a 64GB option only which can be expanded via the Micro SD card slot. There’s also 4GB RAM under the hood in both.

Given that we only had a brief amount of time with the device, we can’t give a full appraisal of the software on board but it does appear that Samsung really have toned down the TouchWiz UI on top of Android 7.0 and everything looks a lot more professional and user-friendly. We also got a brief demonstration of their new AI assistant software, Bixby, which has its own dedicated launch button on the left hand side of the device. It worked fairly well during the demonstration, letting the user control 10 core apps on their phone via their voice, search for information on products and landmarks and handle general every day use of the phone in an intuitive way. It really can be seen as Samsung’s own interpretation of Apple’s Siri and Google’s Assistant but time will tell how well it can match up to both of them. 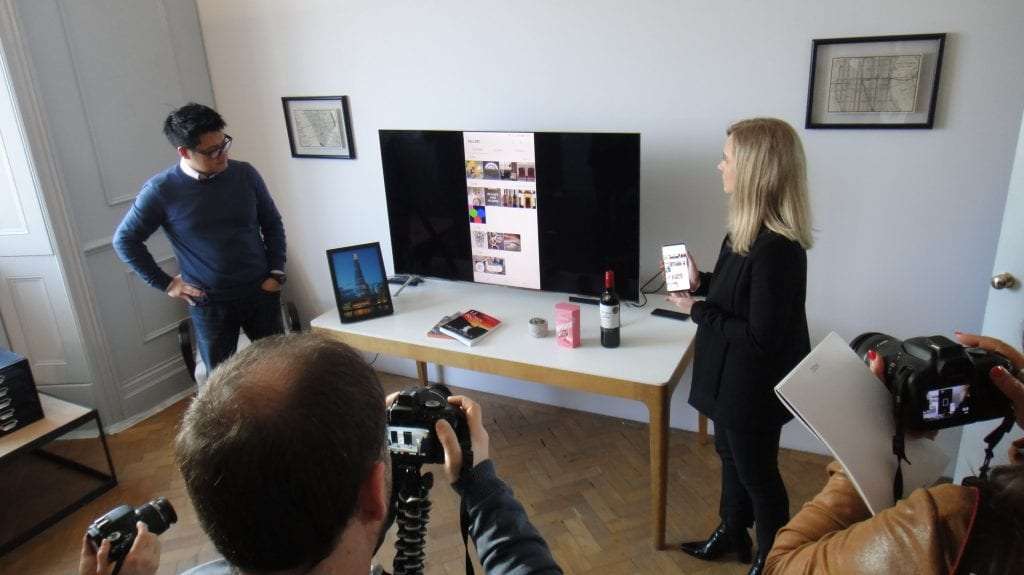 Launch of the service and its features will be rolled out in stages with South Korea and North America first on the list with Europe to follow soon after. They also had a wide selection of new cases and wireless charging pads on display for the new handsets (images below) 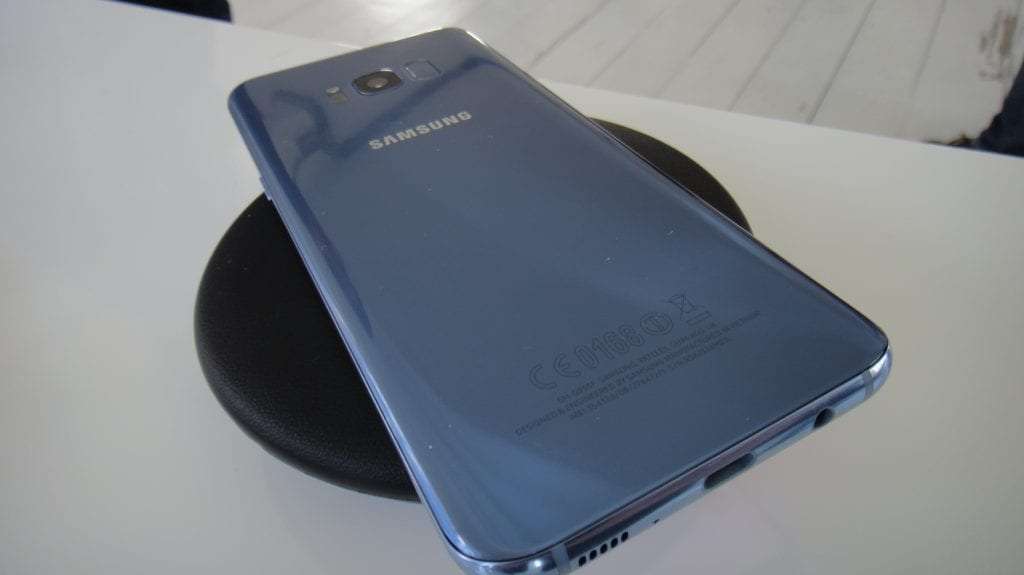 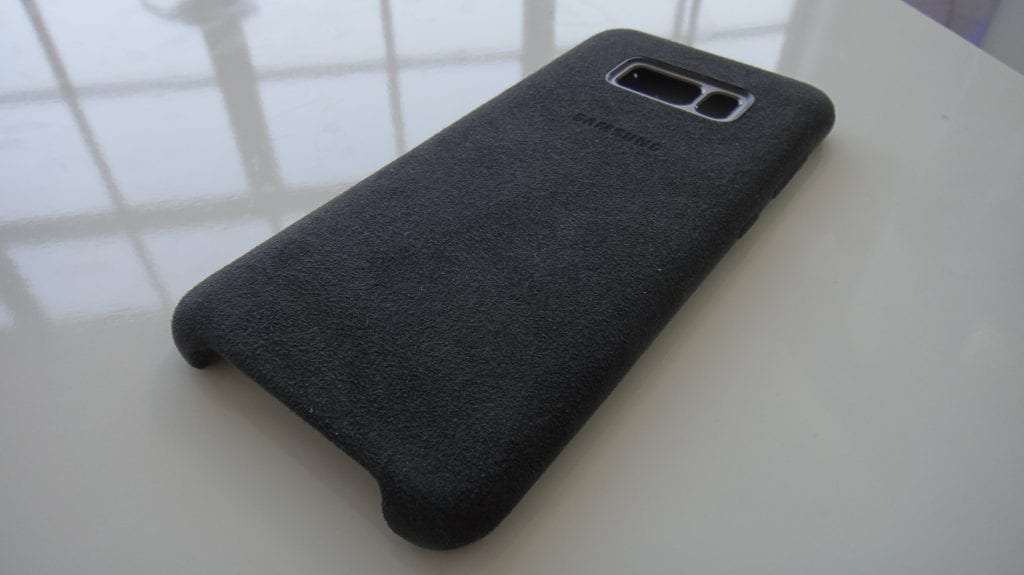 So, to clarify, the only difference between the two devices is the screen and battery size, everything else is the exact same. We’re definitely fans of this decision as it doesn’t cause consumers to compromise on specs if they want to pick up the smaller of the two devices.

Below are the official specs for both devices: 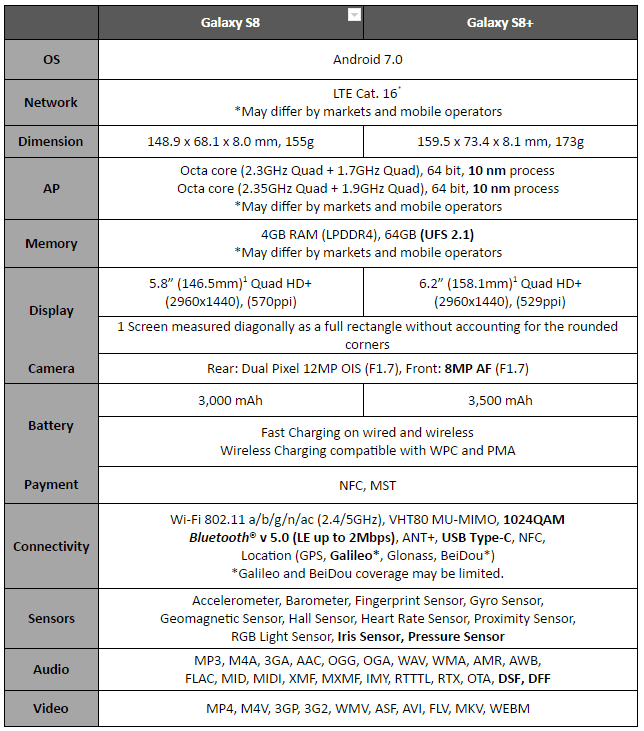 Pricing has yet to be confirmed as of time of writing but the Samsung Galaxy S8 and S8+ are available for pre-order in Ireland starting today until April 19th from selected operators and retailers. Those who place a pre-order in this time period will receive their handset on April 20th depending on stock availability.

The phones will then be widely available on April 28th in UK and Europe.

We also got to have some hands-on time with Samsung’s new DeX docking station which allow you to connect your new Galaxy S8 handset to a monitor via the dock and use it like a fully-functioning PC. They worked in collaboration with Microsoft to create full desktop version of their Microsoft Office apps and also included fully-functioning Citrix Receiver applications for more power-intensive programs. The dock also comes with its own cooling fan built in for when you do push your new Galaxy S8 to the limit. 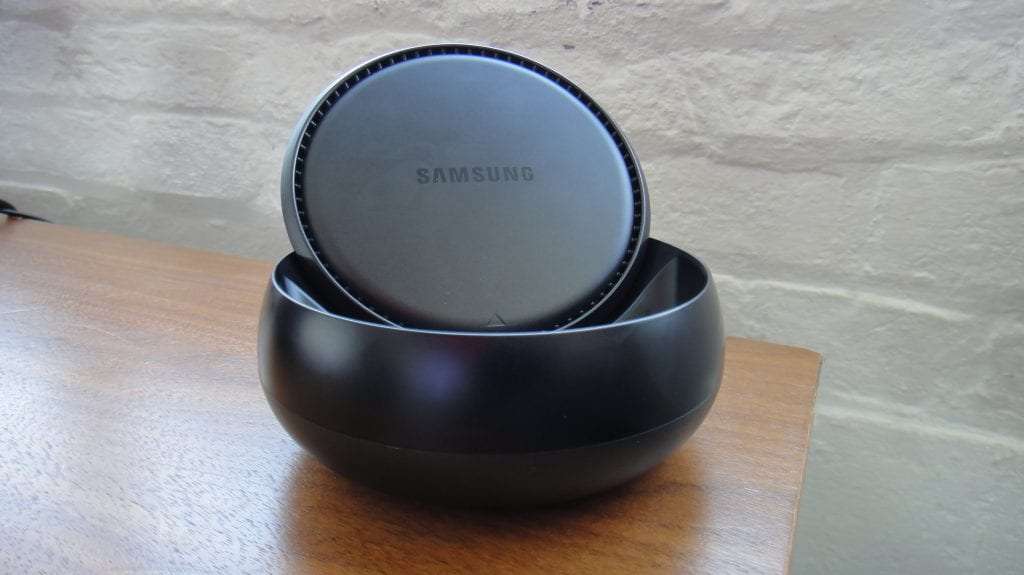 Seeing as you’re working off your phone via a monitor, you can also rest easy that all of your calls and notifications will show up on your display and allow you to quickly undock your phone and take your call elsewhere or you can answer it through the dock also. 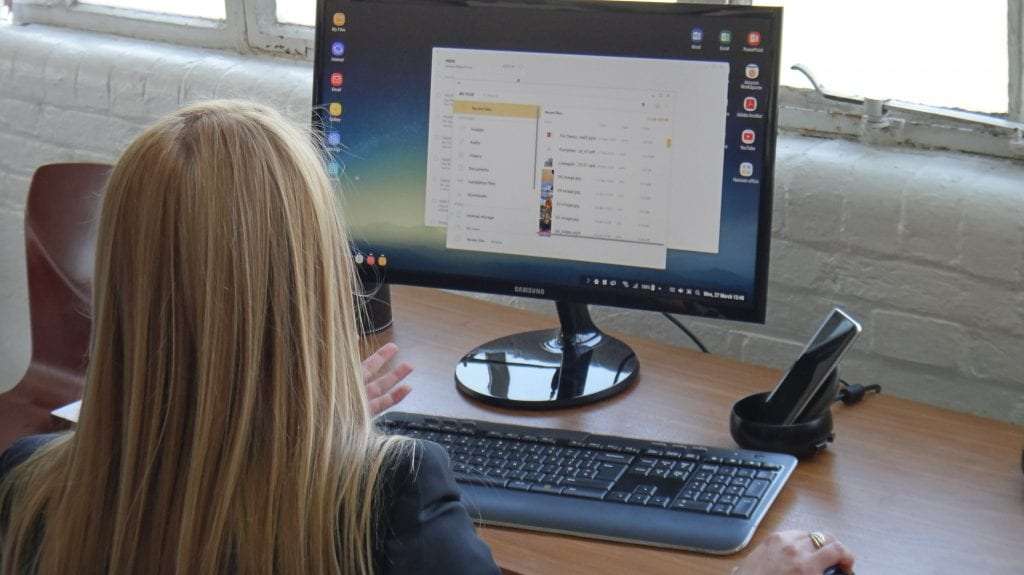 The whole set up was pretty streamlined and smooth-looking and it showed that the S8 and its new 10nm chipset is more than capable of handling multitasking on the fly. Availability has yet to be confirmed along with pricing.

Samsung also unveiled their 2nd generation model of their impressive Samsung Gear 360 Camera. Quite different in shape to the first generation model, the new Gear 360 now has a more ergonomic design that makes it easier to handle. The device includes Samsung’s own f2.2 fish-eye lenses that support 4K 360 video capture and live 360 degree video streaming to Facebook, Youtube and Gear VR. The battery has also been slightly reduced in size but we’ve also been told that it will last just as long as the 1st generation model. 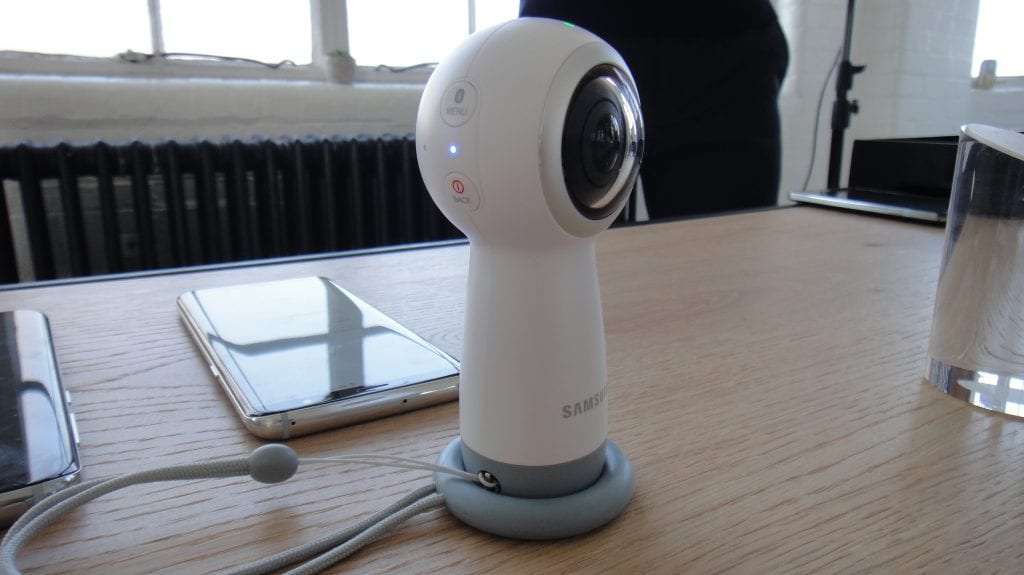 Again, availability has yet to be confirmed along with pricing.

We’ll have our full review of the new handsets from Samsung on the site soon so stay tuned! If you have any questions about the device, let us know in the comments below.

The official press release for the new handsets can be found below.

Discover New Possibilities with the Samsung Galaxy S8: A Smartphone Without Limits

Dublin – 29 March 29, 2017 – Samsung Electronics Co., Ltd. introduces the world to the Galaxy S8, a smartphone that pushes the boundaries of traditional smartphones with its seamless hardware design and offers a new way for users to interact with their phone. With the launch of multiple services and apps, as well as a stunning Infinity Display for immersive viewing experiences, the Galaxy S8 brings a new level of functionality and convenience, opening up a galaxy of possibilities.

“The Samsung Galaxy S8 ushers in a new era of smartphone design and fantastic new services, opening up new ways to experience the world,” said DJ Koh, President of Mobile Communications Business, Samsung Electronics. “The Galaxy S8 is our testament to regaining your trust by redefining what’s possible in safety and marks a new milestone in Samsung’s smartphone legacy.”

The Galaxy S8 builds on Samsung’s heritage of creating stunning designs and functional devices. Available in 5.8-inch and 6.2-inch models, the Infinity Display and bezel-less design form a smooth, continuous surface with no buttons or harsh angles. The result is a truly immersive viewing experience without distractions and makes multi-tasking more convenient. The Galaxy S8’s compact design enables comfortable one-handed operation and Corning® Gorilla® Glass 5 on both the front and back for both durability and a high-quality finish.

In addition to the new design innovations, Samsung continues to deliver cutting-edge technology that users love, including:

The Galaxy S8 will also come with the foundational Galaxy features that our customers have come to love, including:

New Way to Interact with Your Phone

Bixby* is an intelligent interface that will help users get more out of their phone. With the new Bixby button, you will be able to conveniently access Bixby and navigate through services and apps with simple voice, touch, vision and text commands. At launch, Bixby’s Voice function will integrate with several Samsung native apps and features including Camera, Contacts, Gallery, Messages and Settings, with the plan to expand its capabilities to include more Samsung and third-party apps in the near future. Contextual awareness capabilities enable Bixby to offer personalised help based on what it continues to learn about the user’s interests, situation and location.

Users can also shop, search for images and get details about nearby places with Bixby’s image recognition technology. As the Bixby ecosystem grows, it will connect across devices, apps and services as a ubiquitous interface, and open up new experiences and scenarios to simplify life.

Beyond the Phone Experiences

The Galaxy S8 offers a robust portfolio of products and services, elevating the Galaxy S8 experience for premiere mobile productivity and connectivity.

Leveraging the processing power of the Galaxy S8 for enhanced productivity, Samsung DeX is a unique solution that transforms your smartphone into a desktop by providing a secure desktop-like experience. With Samsung DeX, users can easily display and edit data from their phone, making working from a smartphone faster and smarter.

New high-performance earphones tuned by AKG by Harman, offering uncompromised audio for unbeatable sound quality, will come as an in-box accessory. These earphones will have a comfortable hybrid canal fit for better noise cancellation and will be made from anti-tangle metal-fabric material.